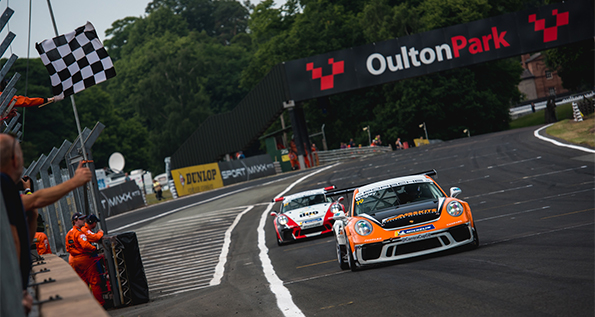 Tio Ellinas (Slidesports Engineering) emerged with the championship lead of the Cup GB, the fastest single marque GT racing championship in the UK, following rounds seven and eight at Oulton Park. However, maiden wins for Tom Wrigley (JTR) and 17-year-old GB 2018 / 2019 Junior Dan Harper (JTR) means that there has now been six different winners from the first eight races – Harper is the youngest winner in the history of the championship.

Championship protagonist Dino Zamparelli (Redline Racing) endured a difficult weekend with a retirement in race one, this saw him start from the back of the grid in the second of the weekend’s races where a seventh place finish in the Pro category earned him two points. The result means that the championship pendulum has swung towards Ellinas who now leads Zamparelli at the top of the table by six points.

Race one
Tom Wrigley (JTR) took his maiden pole position in qualifying for round seven of the championship, with Pro category points leader Dino Zamparelli (Redline Racing) alongside him on the front row. Less than three-tenths of a second separated the rest of the Pro category grid in a closely contested qualifying session. Dry conditions welcomed 22 cars to the start of Saturday’s 18 lap race.

At the start of the second lap Lewis Plato (JTR) overtook Zamparelli into the first corner, Zamparelli’s car had struck debris on lap one and was loosing speed as a result. Pro-Am runners Perez, Vaughan and Jamie Orton (JTR) were embroiled in a close battle for second position in the category – Perez ultimately moving up to P2 with Orton in P3 and Vaughan relegated to P4. However the positions would soon be reversed with Orton moving ahead of Perez to secure second place.

Plato then began chasing after his JTR team mate Wrigley for the lead of the race, reducing the gap from over one-second to just a few tenths. Despite his car suffering damage, Zamparelli maintained his position in third with four cars in close pursuit, the most menacing of which was Zamparelli’s championship rival Ellinas – the Cypriot driver was directly behind him in fourth spot. In the Am category Jennings dropped out of a potential podium position with a puncture allowing Iain Dockerill (Asset Advantage Racing) through, having pitted for fresh tyres Jennings then continued his race.

With six laps of the race remaining, Ellinas found a way by Zamparelli for the final podium position, in the process he fended off the advances of 17-year-old GB 2018 / 2019 Junior Dan Harper (JTR) – later into the lap Zamparelli retired his car. In the closing stages of the race Perez moved into the lead of the Pro-Am category with Vaughan following him through to second and Collingbourne in third. In Am Kyle-Henney overtook Mangion for the category lead with Dockerill in third.

As part of the 2018 podium procedure, overall winner Wrigley selected at random the number 4 ball, which reverses the grid positions of the top four overall race finishers from round seven. This formed the starting grid for round eight; Harper, Ellinas, Plato, and Wrigley.

Race two
As part of a weekend of global celebrations to mark 70 years of the sports car, a ‘Type 991' 911 GT3 road car led the 22 cars to the grid for race two on Sunday in hot and dry conditions. The road car’s high-revving naturally-aspirated 500 hp (368 kW) four-litre flat-six engine remains virtually unchanged from that found in the thoroughbred ‘Type 991' 911 GT3 Cup car raced by the Cup GB field, underlining the link between the racetrack and the road.

At the start of the 18 lap race 17-year-old GB 2018 / 2019 Junior Dan Harper (JTR) got away cleanly, but it was Lewis Plato (JTR) who made the best start from the second row of the grid getting ahead of Tio Ellinas (Slidesports Engineering) into the first corner. In the Pro-Am category Dan Vaughan (Motorbase Performance) took the category lead followed by Seb Perez (Amigos Team Parker) and Jamie Orton (JTR). Of the Am runners Peter Mangion (Team Parker Racing) headed Peter Kyle-Henney (IN2 Racing) and Iain Dockerill (Asset Advantage Racing).

On lap 11 Perez mounted a challenge on Orton for P2 in Pro-Am, however the Rookie went off the track at Island Bend before rejoining the race behind Orton. In the Pro category Plato gradually closed the gap to leader Harper before the pair encountered a spinning Fraser Robertson (Redline Racing), both were forced to take avoiding action, Plato taking to the grass before rejoining the track.

In Pro-Am Rory Collingbourne (Welch Motorsport) and Esmee Hawkey (GT Marques) battled for the final category podium position, the two made contact in the closing stages ending Hawkey’s race in the gravel trap – for her part in the incident Hawkey was later docked two championship points. Vaughan and Orton ran very closely together in the latter stages of the race, Vaughan ultimately clinching category honours. The fight in the Am category was close, though it remained unchanged throughout the race; Mangion, Kyle-Henney and Dockerill.

In the closing stages of the race Harper resisted further pressure from Plato to claim the maiden victory of his Cup GB career, the 17-year-old is the youngest winner in the championship’s history. Taking the final podium position was Ellinas, the Cypriot driver’s second podium result of the weekend was enough to propel him into the lead of the championship. For his performance at Oulton Park Wrigley was handed the Driver of the Weekend accolade, JTR were awarded Team of the Weekend.