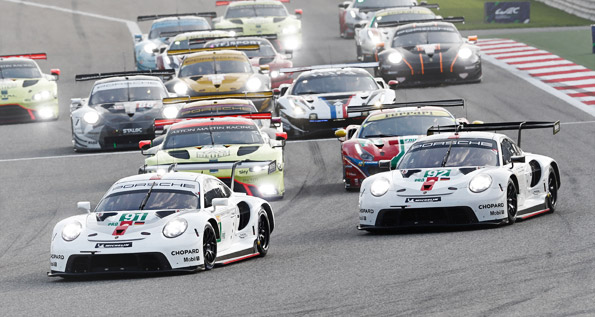 The new 911 RSR had at times held the lead, only to have technical problems relegate both works-run vehicles far down the field. A shock absorber broke on the No. 92 car driven by the world champions Kévin Estre (France) and Michael Christensen (Denmark), while a wheel nut on the sister car manned by Gianmaria Bruni (Italy) and Richard Lietz (Austria) came loose and caused tyre damage. The repairs resulted in both ca. 515-hp cars losing about two laps to the frontrunners. Despite perfect teamwork and a strong performance from the drivers, the gap could not be closed. heads into the second half of the season ranking second in the manufacturers’ classification.

In the GTE-Am class, the three customer teams gave an impressive performances with their ca. 510-hp 911 RSR in the 2017-spec. In addition to the race winners Keating, Bleekemolen and ten Voorde, the No. 86 car fielded by Gulf Racing also took the lead at times. The all-British driver crew, Michael Wainwright, Ben Barker and Andrew Watson, concluded the final race of the year on position three after receiving a drive-through penalty. The No. 77 911 RSR, shared by the works driver Matt Campbell (Australia), Dempsey-Proton Racing team owner Christian Ried (Germany) and the Italian Riccardo Pera, finished on sixth place. The No. 88 sister car retired after an accident. Project 1’s number 56 vehicle took the flag in ninth place after a lengthy pit stop for repairs.

Michael Christensen ( 911 RSR #92): “Our car was strong, the team worked perfectly and we drivers did our job. A top result would have been possible at Bahrain. Unfortunately this time technology threw a spanner in the works. Things like this can happen, although of course it painful for us, particularly at this race where so many points were up for grabs.”