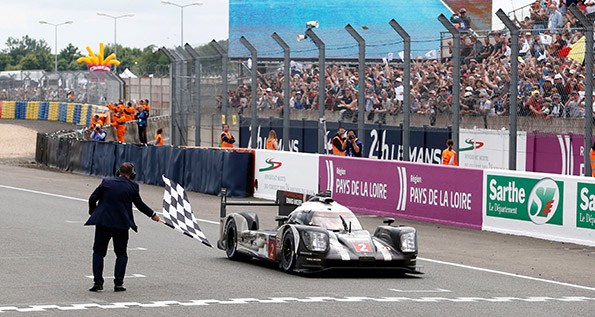 The 84th running of the 24 Hours of Le Mans will always be remembered for its dramatic finish on June 19th 2016. took its 18th overall victory when the leading Toyota retired on the final lap. The pace at the front in the duel with the Japanese manufacturer and the many lead changes pushed everyone to the limit and beyond. Oliver Blume, Chairman of the Board of AG, witnessed it from the team’s garage: “What happened in Le Mans is almost incomprehensible. From the first to the last lap this race was competition on the ultimate level in terms of sport and technology – and it was thrilling as well. The race asked the utmost from our cars, our drivers and the team. We always were either in the lead or in striking distance of Toyota. We were fighting until the end and never gave up. This spirit was rewarded in the end. We have the greatest respect for Toyota.”

• Car number 2 was leading the race for 51 laps. The number 1 sister car of Timo Bernhard (DE), Brendon Hartley and Mark Webber (AU) was leading for 52 laps in the first third of the race.

• Due to the many phases with reduced speed because of safety car periods and slow zones, the race distance was almost 150 kilometres short of the distance covered in 2015.

• For 327 of the 384 laps the number 2 car was able to go at full race pace. On 57 laps either the safety car was on track or at least one so called slow zone was in place – this means that only 80 km/h was allowed for safety reasons at certain parts of the 13.629 km long track.

• The 919 Hybrid recuperated and used 2,22 kWh (8 megajoule) per lap. If it was a power plant, a family home could be supplied with electricity for three months.

• Car number 2 used 11 sets of tyres in the race. The first set were rain tyres, all others were slick tyres.

• The longest distance covered with one set of tyres was 53 laps with Marc Lieb at the wheel.

• The fastest pit stop, including a tyre and driver change, by the Team was 1:22.5 minutes.

• The fastest stop for refuelling was done in 65.2 seconds.

• The winning ’s gearbox mastered 22,984 gear changes (up shift and down shift) during the 24 hours.

• The longest time behind the wheel in the winning car was for Neel Jani with nine hours and 24 minutes. Romain Dumas spent the longest continuous time in the car.

• The drivers had 0.85 litres of drink on board for each stint. The drink bottle was changed at every refuelling stop.

• For the best possible visibility, the prototypes had four tear-offs on the windscreens, which were removed one after the other.

• 32.11 gigabytes of data from car number 2 were transmitted to the pits during the 24 hours.

• After three rounds of the FIA World Endurance Championship, with double points in Le Mans, now leads the championship with 127 points, followed by Audi (95) and Toyota (79). In the drivers’ world championship Dumas/Jani/Lieb have scored 94 points and are leading by a gap of 39 points. Bernhard/Hartley/Webber are currently in 19th position with 3.5 points.