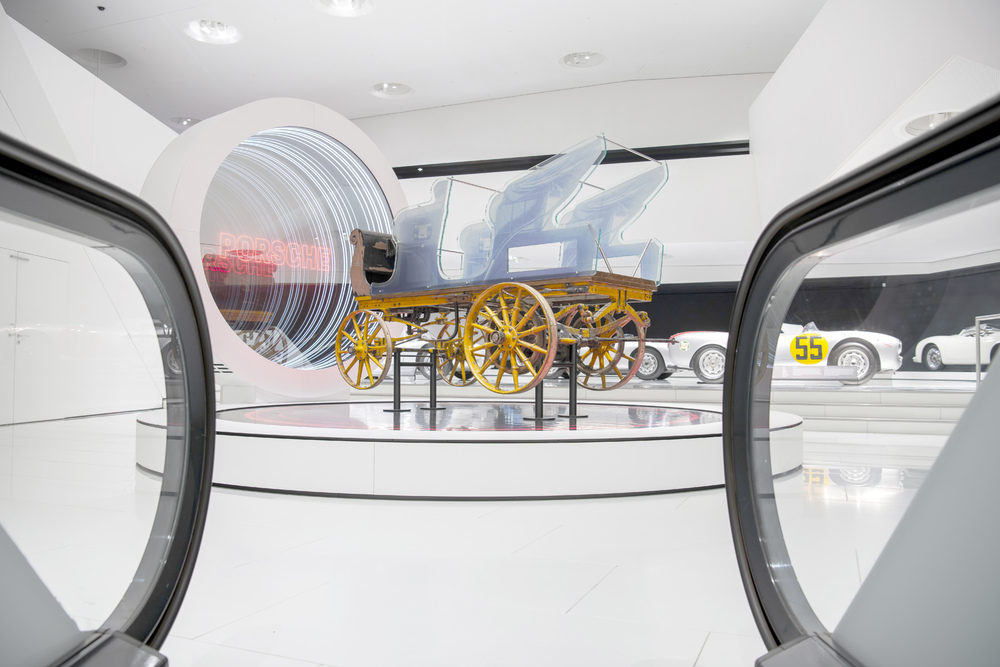 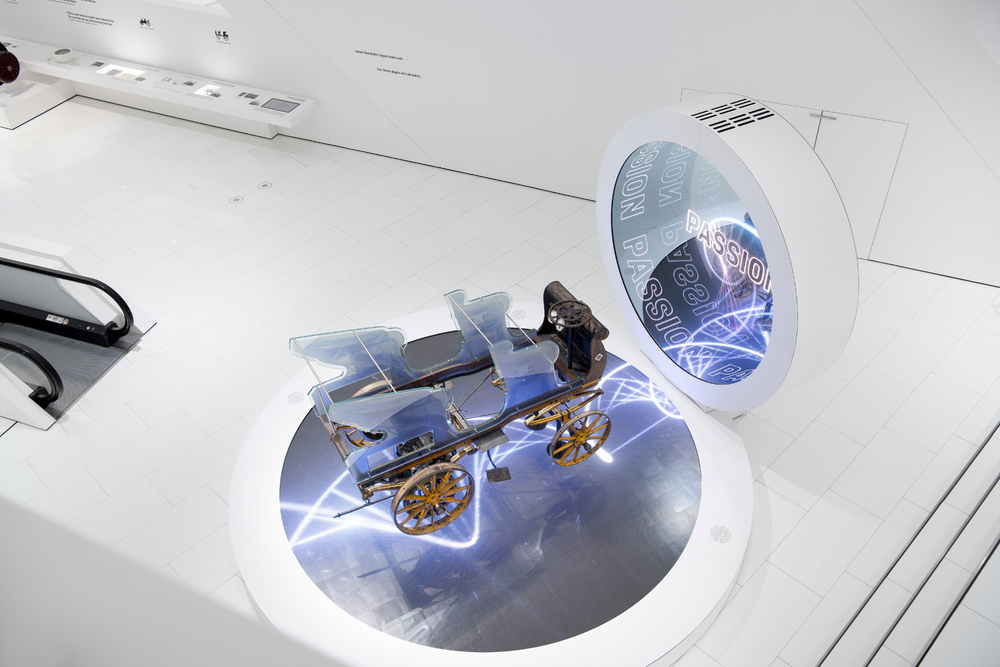 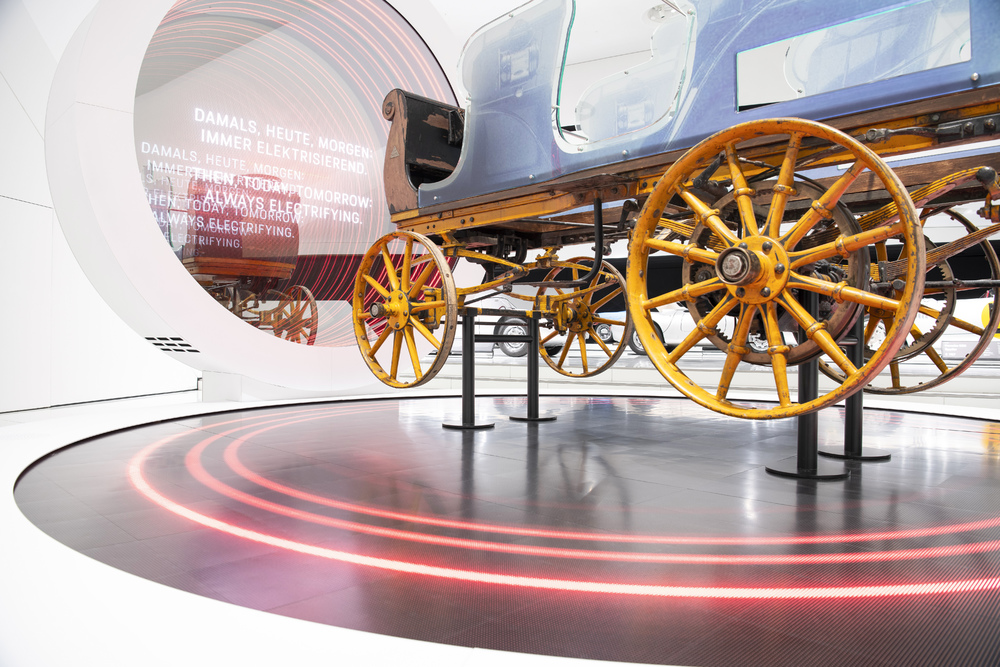 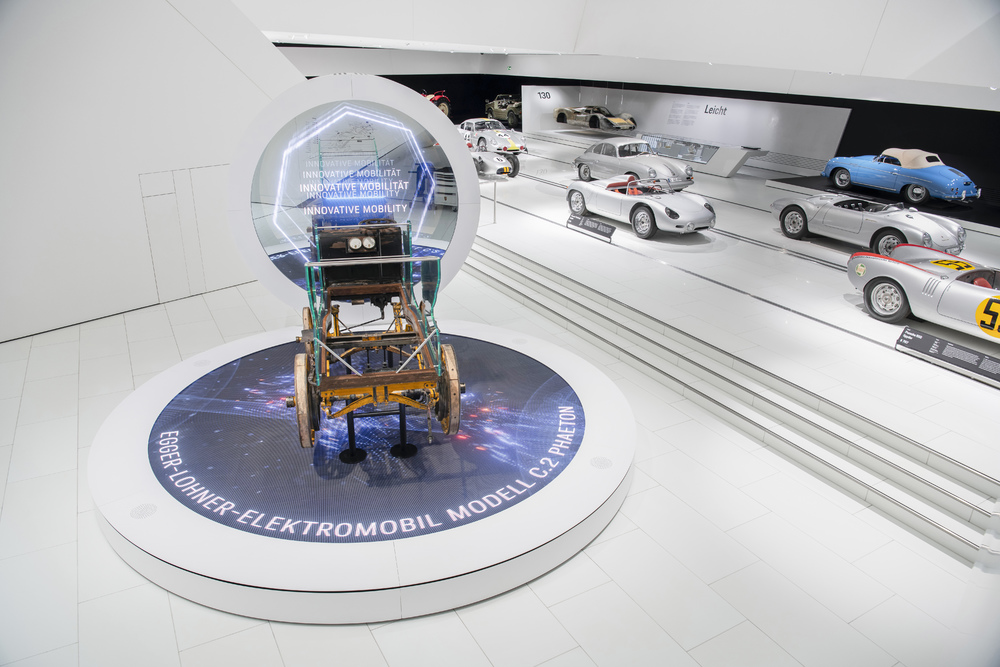 Stuttgart . Visitors to the Museum have always been able to immerse themselves in the world of – and now there’s a futuristic new interpretation right from the start. The highly technically complex Future Portal puts the spotlight on the Egger-Lohner C.2 Phaeton – the oldest surviving design on which Ferdinand worked. It now captures the attention of everyone who sees it, inviting them on a journey through space and time. The installation, located right by the top of the long escalator leading to the upper floors of World is the captivating new start to the Prologue, which is the introductory part of the permanent exhibition.

After more than a year of research, planning and execution, the 1898 Egger-Lohner C.2 Phaeton, one of the most important vehicles in the company’s collection, has been given its proper accolade as the opening exhibit. The electric car was powered by the ‘Octagon’, an electric motor developed by that was mounted in front of the rear axle. With front-axle steering, it drove through the streets of Vienna 123 years ago. Today, it stands on a pedestal approximately five metres in diameter, at the front of which is a technically very sophisticated portal. It appears to be travelling from the past into the present.

This illusion is created by an infinity effect, which is produced by a combination of LED technology, specially manufactured mirror discs and content displayed in 3D. The result is an infinite and magical depth that captivates visitors, inviting them to rediscover the display and its cosmic soundtrack again and again from different angles. The holographic storytelling impressively tells the story of ’s DNA. “Many visitors have never associated the horseless carriage with electric mobility,” says curator Iris Haker, explaining the upgrade. “Now we’ve created a real wow effect. Every visitor is drawn into ’s electric beginnings thanks to ‘infinity mirror’ technology that has never been used before.”

The Future Portal provides visitors to the museum with content through the depth effect of a two-and-a-half-minute film and accompanies them throughout the entire exhibition, as the installation can be seen from almost every corner of the museum. As a result, the Egger-Lohner C.2 Phaeton is now getting the attention it deserves. The film, with four chapters that merge into one another, brings the viewer closer to over 120 years of ’s history. Visitors can jump into any chapter at any time. All the action is accompanied by specially composed ambient sounds, including similar ones to those of the all-electric models. “You really need to view the installation from different angles in order to fully enjoy the infinite magical depth,” recommends Iris Haker. The Future Portal completes the upgrade of the Prologue, the introductory section to the museum’s permanent exhibition, and adds a unique visitor experience to the Museum