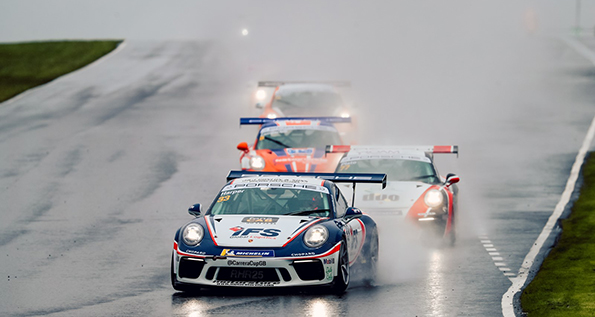 The undulating 1.3-mile circuit at Knockhill is famed for producing exciting racing and it did not disappoint with two action-packed Cup GB races in wet conditions. Two Pro-Am category victories for Seb Perez (Amigos Team Parker) saw him fend off the advances of Dan Vaughan (Motorbase Performance), Vaughan finished second in both races with Dan Welch (Welch Motorsport) securing two category podium finishes. For the first time this season Perez now leads the Pro-Am championship from Jamie Orton (JTR) – two points separate the pair as the season heads towards its conclusion.

Peter Mangion (Team Parker Racing) took two category wins to snatch the lead of the Am championship from close rival Peter Kyle-Henney (IN2 Racing) who endured a difficult weekend of racing. Mangion was followed home in both races at Knockhill by Iain Dockerill (Asset Advantage Racing) and Shamus Jennings (G-Cat Racing). There are now ten points between Mangion and Kyle-Henney at the top of the Am category points table.

Early into the race the leading pair caught a back marker and Plato used it to his advantage, mounting a run on Harper to snatch the overall lead of the race. Almost immediately the Safety Car neutralised proceedings to allow the recovery of two stricken vehicles from different gravel traps – Fraser Robertson (Redline Racing) from Taylor’s Hairpin and Jamie Orton (JTR) from Clark’s corner. Orton’s exit from the race made the Pro-Am order Vaughan, Perez, and Hawkey. At the restart Plato and Harper pulled a gap on Zamparelli in P3, but the Junior soon executed a move to retake the race lead from Plato – the pair ran side by side all the way from Clark’s into the final corner, Harper edging ahead.

On lap 17 Plato left the track at the hairpin, this promoted Zamparelli to P2 and his title rival Tio Ellinas (Slidesports Engineering) to P3 overall after a battle with Tom Wrigley (JTR) – Plato rejoined to continue his race. On lap 22 Ellinas momentarily left the track at Clark’s rejoining directly in front of Wrigley in P4, however the Cypriot managed to defend his podium spot with the Pro order ahead remaining unchanged. Harper crossed the line to claim the second victory of his Cup GB career ahead of Zamparelli. In Pro-Am Perez found a way past Vaughan to secure the category lead with Dan Welch (Welch Motorsport) taking third.

In the final moments of the race Am category leader Kyle-Henney was involved in contact with another car causing him to visit the gravel trap. As a result this allowed Mangion through to take victory from Dockerill with Shamus Jennings (G-Cat Racing) securing the final category podium position. Kyle-Henney eventually managed to continue his race to cross the line fifth in category securing four championship points.

As part of the 2018 podium procedure, overall winner Harper selected at random the number 4 ball, which reverses the grid positions of the top four overall race finishers from round eleven. This formed the starting grid for round twelve; Gamble, Ellinas, Zamparelli, Harper.

Race two
The second race at Knockhill started under the Safety Car due to wet weather conditions. On lap four the Safety Car withdrew and racing commenced with all runners holding station in their respective grid slots. George Gamble (Amigos Team Parker) led Tio Ellinas (Slidesports Engineering) and Dino Zamparelli (Redline Racing) at the front of the pack, all three were covered by just half a second for a number of laps.

On lap 15 GB 2018 / 2019 Junior Dan Harper (JTR) mounted a successful challenge on Zamparelli, passing the championship leader for P3. Harper then set about closing the gap to second place driver Ellinas, with Zamparelli keeping a watching brief directly behind. Tom Wrigley (JTR) and team mate Lewis Plato (JTR) battled for fifth place with Wrigley ahead of Plato until the former briefly visited the gravel trap, Wrigley rejoining the race in seventh position.

As the leading cars lapped back markers, Rookie Gamble grew his lead at the front of the race to seven seconds, meanwhile Harper put increasing pressure on Ellinas closing that gap to within 0.386s. On the final lap Ellinas ran wide out of Duffus Dip, Harper drew alongside him as Ellinas rejoined the track through Leslie’s, Harper making a clean pass for second place at Scotsman corner. Gamble took the chequered flag to claim the third victory of his Cup GB career with Harper in second and Ellinas occupying the final podium position. Perez led Vaughan and Welch home to form the Pro-Am podium, Mangion, Dockerill and Jennings comprised the top three in the Am category. For his performance at Knockhill Harper was handed the Driver of the Weekend accolade, Redline Racing were awarded Team of the Weekend.