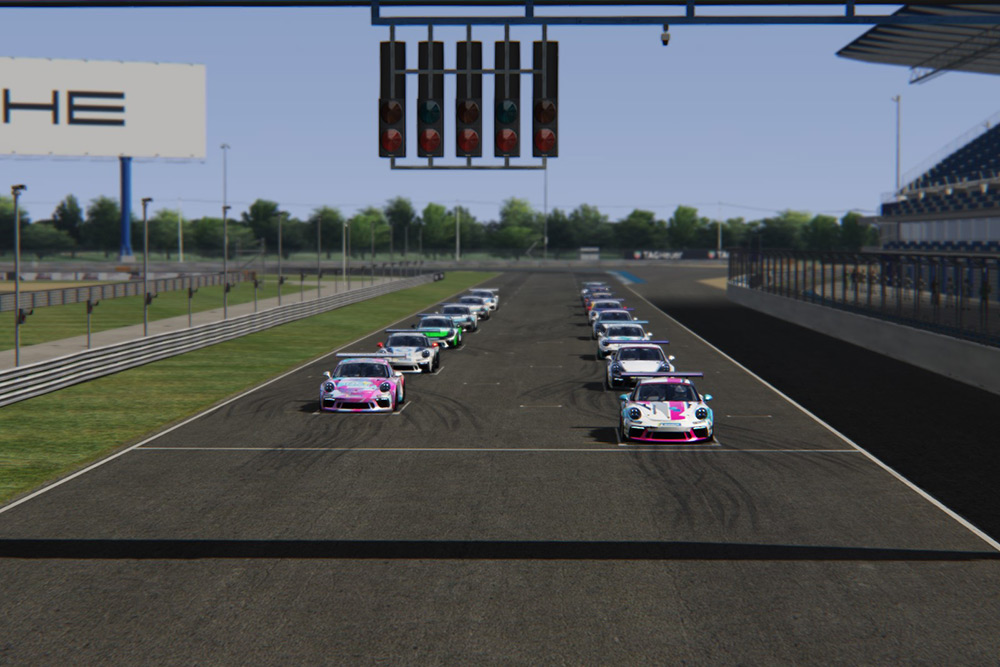 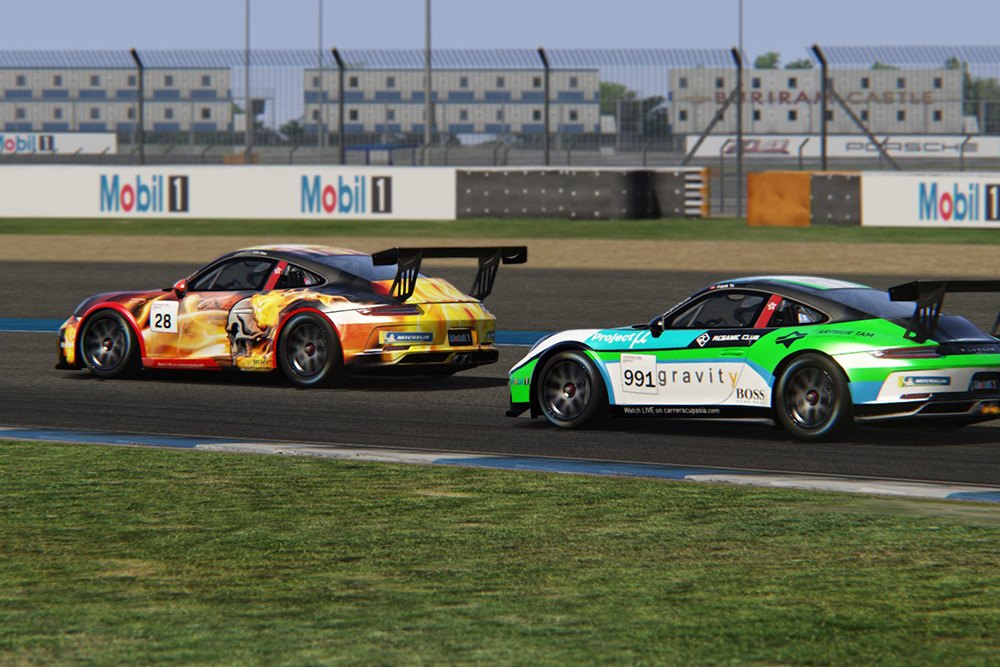 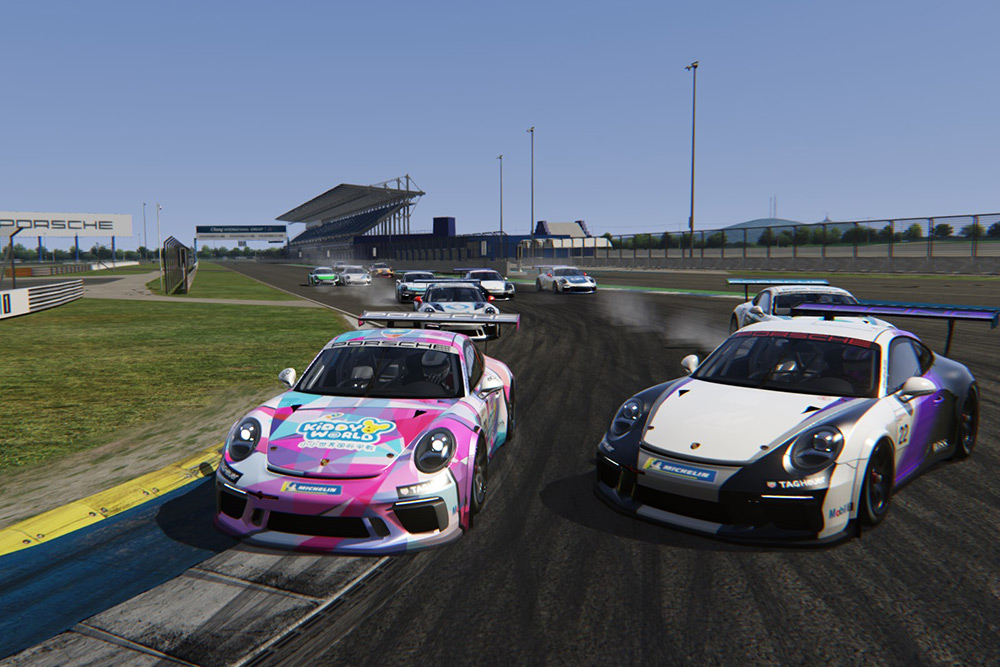 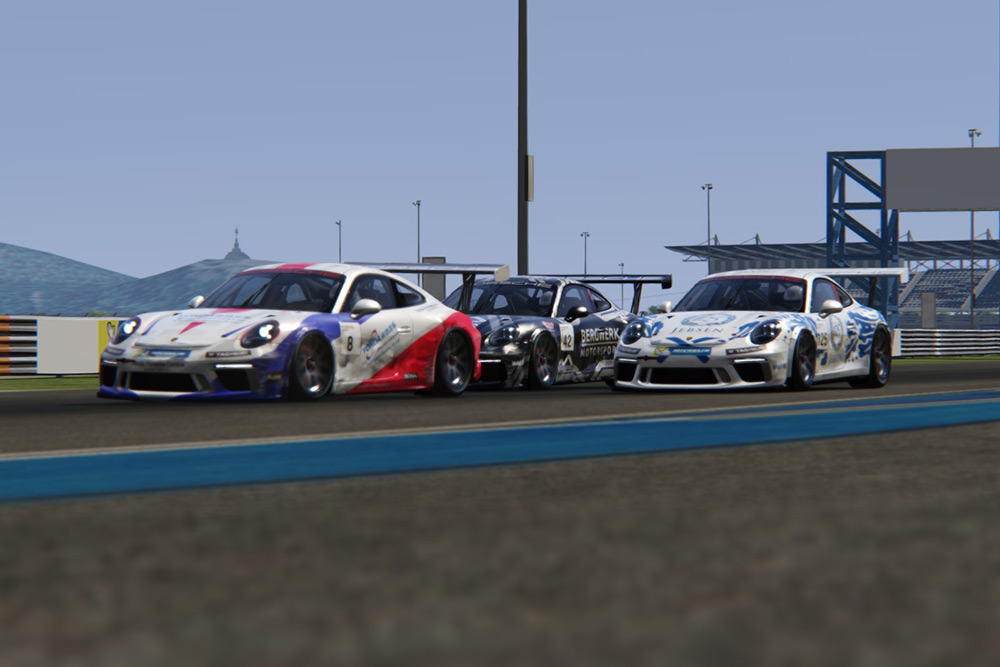 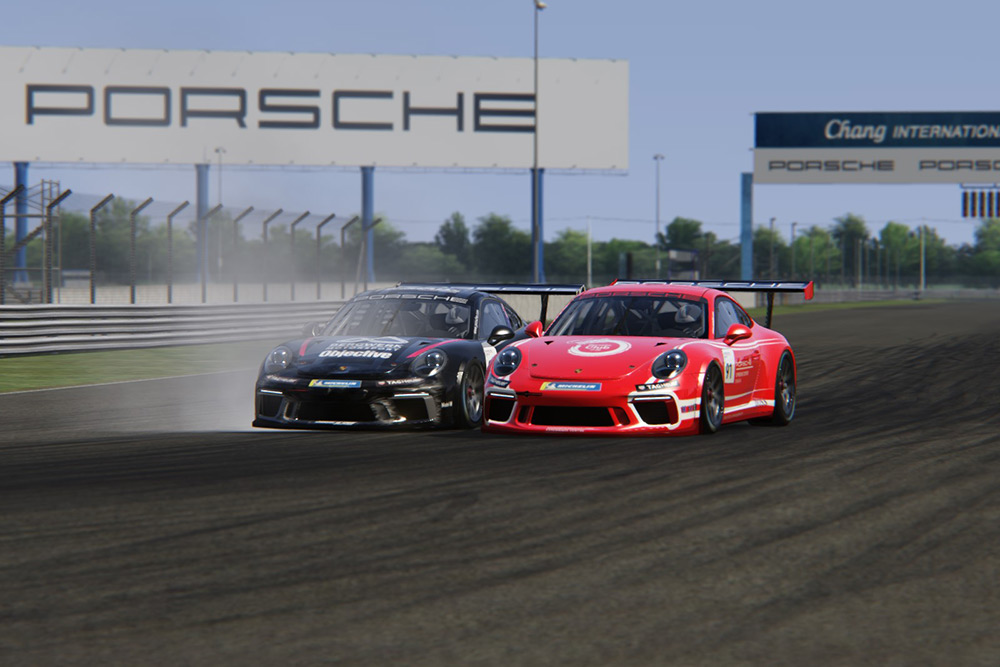 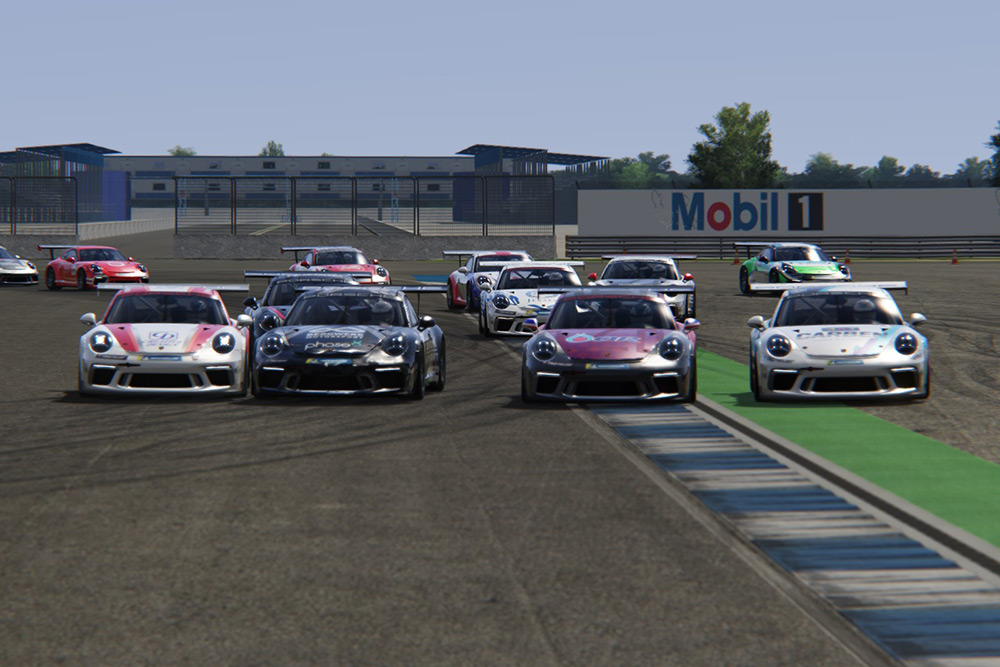 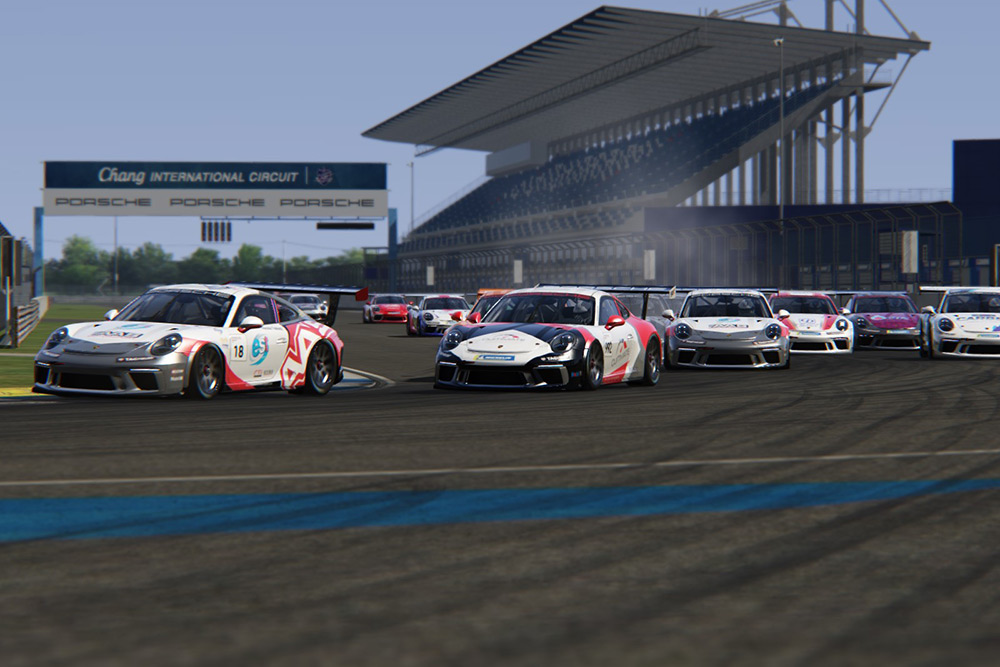 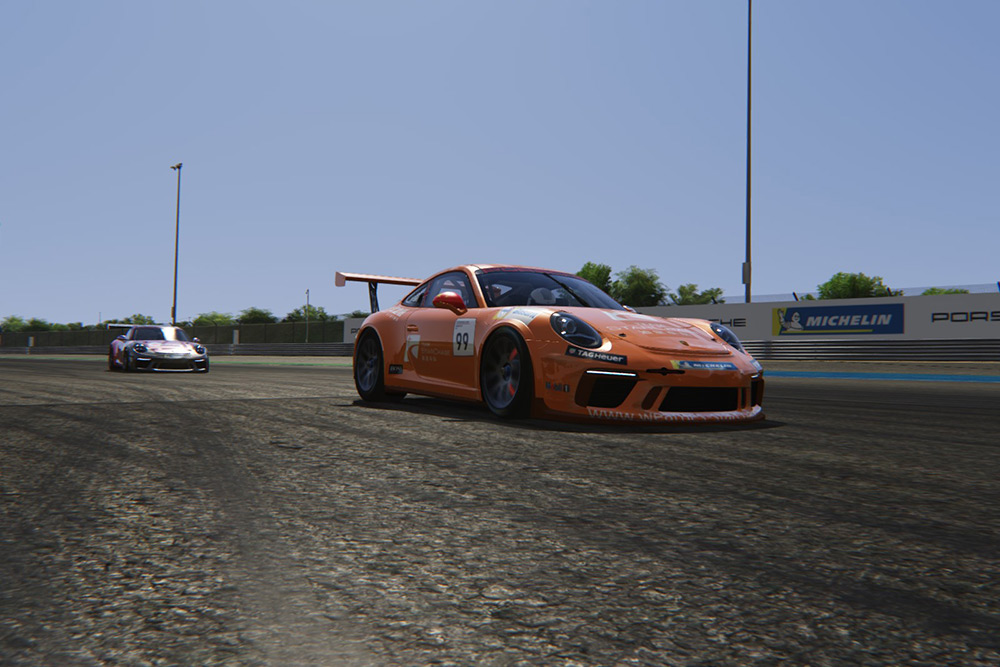 Shanghai. For the first time since 2016, the Cup Asia visited Thailand’s Chang International Circuit in Buriram – albeit in virtual form. This penultimate stop of the Cup Asia Virtual 2020 saw four thrilling races broadcast around the world with competitors logging in from as far away as Australia and the United Kingdom. With all gremlins seemingly expunged from the system, the technical side of the race was impressively smooth, with nary a hint of lag or rubber-banding throughout the whole broadcast and improved visual fidelity.

New contender Shen Qiang, racing for SD Monkey Racing, snatched pole position on his maiden appearance, disrupting the Pro-Am grid from the outset. Modena Motorsports’ Antares Au – who up until now had been fairly dominating the Pro-Am category – claimed the second fastest lap time just over three tenths of a second slower than Shen. Third on the grid was Kiddy World Racing’s Eric K, who had scored a perfect Am season so far having come first in every single race.

The first race of the day saw pandemonium out of the grid. As soon as the lights extinguished, Shen, Au and Eric K wasted no time in getting into it, with all three drivers attempting to edge each other out of position. A clash at turn 1 between Au and Shen sent the two drivers spinning out and causing chaos behind them, with Eric K afforded the opportunity to launch himself into P1. As the melee behind him subsided, Eric K was free to develop a sizable lead, gaining a daunting 15 second advantage over his nearest rival. That rival turned out to be Zheng Tong Auto’s Bao Jinlong – currently on a double championship winning streak, having won the Cup Asia Pro-Am category in 2018 and 2019. Bao is a tough opponent, however Eric K’s lead proved to be insurmountable, and the first Pro-Am and Am race of the day saw Am driver Eric K continue his perfect season by crossing the finish line first. Bao crossed the finish line second almost 17 seconds behind Eric K. Having had a tough start to proceedings after losing pole, Shen showed his true colours throughout the rest of the race, fiercely battling his way up from the back of the grid to impressively finish in third.

The second Pro-Am and Am race of the day saw the three drivers from Round 5 switching places at the top of the grid. This time, Au was the pole sitter, Eric K started in P2 and Shen started third – just three one-thousandths of a second ahead of Bao, who started in fourth.

The opening of Pro-Am and Am Round 6 appeared to be calmer than the previous round, with all cars smoothly exiting the grid. The peace was not to last, however, with Shen spinning out early on, then Au suffering the same fate after making contact with Eric K. Au spun out right into the path of Modena Motorsports’ John Shen, causing a second clash that sent both drivers hurtling towards the back of the grid. Eric K was once again free to lead the race, however this time he had Bao on his heels early on, and the reigning Pro-Am champion wasn’t going to let Eric K out of his sight. Lurking behind the two lead cars, Dorr Novena Racing’s Yuey Tan had jumped up two places from his P5 start and was hungrily eying a podium finish, having been disappointed with his seventh place finish in the previous race. As the race was drawing to a close, the action heated up. Eric K made an error, erasing his six second lead over Bao and allowing the Pro-Am champ to overtake him. Tan, who had spent the latter half of the race mounting a rearguard defence to fend off countless attacks from SD Monkey Racing’s La Di, lost his position on the very last corner of the race. La Di managed to slip past Tan to take third, Bao came in first, and Eric K settled for second across the finish line while maintaining his perfect record by being first in the Am category.

Team CUITIMATE’s Cui Yue set a virtual lap record with his pole-winning time of 1:37.878, becoming the only driver so far to break the 1:38 barrier. AAS Motorsport’s Tasanapol Inthraphuvasak started Round 5 in P2 just under two-tenths of a second behind Cui. The third spot on the grid was occupied by Inthraphuvasak’s fellow Thai driver Kantadhee Kusiri, also racing for AAS Motorsport.

The opening to Round 5 Pro was a relatively calm affair, with the only notable move being Team StarChase’s Johnathan Hoggard advancing up to second place from his P5 start to race wheel-to-wheel with Inthraphuvasak. Currents points leader Benny Simonsen – racing for Modena Motorsports – saw his stunning record so far tarnished, as he was tipped around halfway through the race and sent careening off into the pit. Cui managed to build up a sizeable lead, and eventually secured a perfect lights-to-flag victory. The real action during this race, however, happened much further down the grid. An intense five-car battle erupted between Kusiri, Team Shanghai Yongda’s Chris van der Drift, Jackson Walls and Cooper Murray from Bergwerk Motorsport, and Team Jebsen’s Daniel Lu Wenlong; that at times saw three cars driving wheel-to-wheel around the track and near-constant position switches between the five of them. Despite their epic showdown, none of the five managed to break into the top three, and at the end of the race Cui was joined on the podium by Inthraphuvasak in second and Hoggard in third. Hoggard’s third place finish – and Simonsen’s misfortune – put the Englishman top of the overall points table going in to Round 6.

The final race of the day featured another relatively peaceful opening. This time Murray started off in pole, followed by Kusiri who clocked a time one one-hundredth of a second behind Murray. Cui started off in P3, clearly buoyed by his maiden Virtual victory in the previous race.

Despite the clean start, the race roared into action before the end of the first lap, with all three Thai drivers – Kusiri, Inthraphuvasak and Bunjong Motorsports’ Tanart Sathienthirakul – locking horns and eventually dropping all the way back to the bottom of the grid due to their three-car clash. Cui managed to slip up the inside of Murray and supplant him in first place. This lead to a furious battle between the two drivers in front, with Walls not far behind them. Unable to accept missing out on converting his pole position into a victory, Murray mounted a series of stinging attacks on Cui, who ably defended his position with some strong driving. As the battle between Cui and Murray raged on, Walls finally took his shot on the last lap, leapfrogging both battling drivers and stealing P1. The race came down to a photo finish, as Walls managed to cross the line in first just 0.132 seconds behind his Bergwerk teammate Murray. Cui claimed the last spot on the podium, crossing the finish line third. However, once all the footage was available to be analysed, several post-race penalties were applied, leaving the final three with Cui in first, Carben Racing Team’s Lu Mengfan in second and Hoggard in third.

With two races in hand, Team StarChase have claimed the Dealer Trophy. StarChase’s driver Johnathan Hoggard – also now topping the overall points table – secured a perfect Dealer Trophy record for his team, with six wins out of six. This marks the third time in a row that StarChase have taken home the Dealer Trophy, having won the award in both the Cup Asia 2018 season and the 2019 season and now in the Cup Asia Virtual 2020. StarChase’s closest rival is Malaysian team Centre Ara Damansara, and their driver Benjamin Albano. Albano’s tally of 93 points makes him a solid bet for taking second place.

The finale of the inaugural Cup Asia Virtual will be held in two weeks time, on Saturday 20 June. Will Hoggard be able to take the overall championship? Will Au manage to leverage his slim 14 point lead over Bao into a championship victory? Be sure not to miss the thrilling denouement to the Cup Asia’s first ever virtual season.