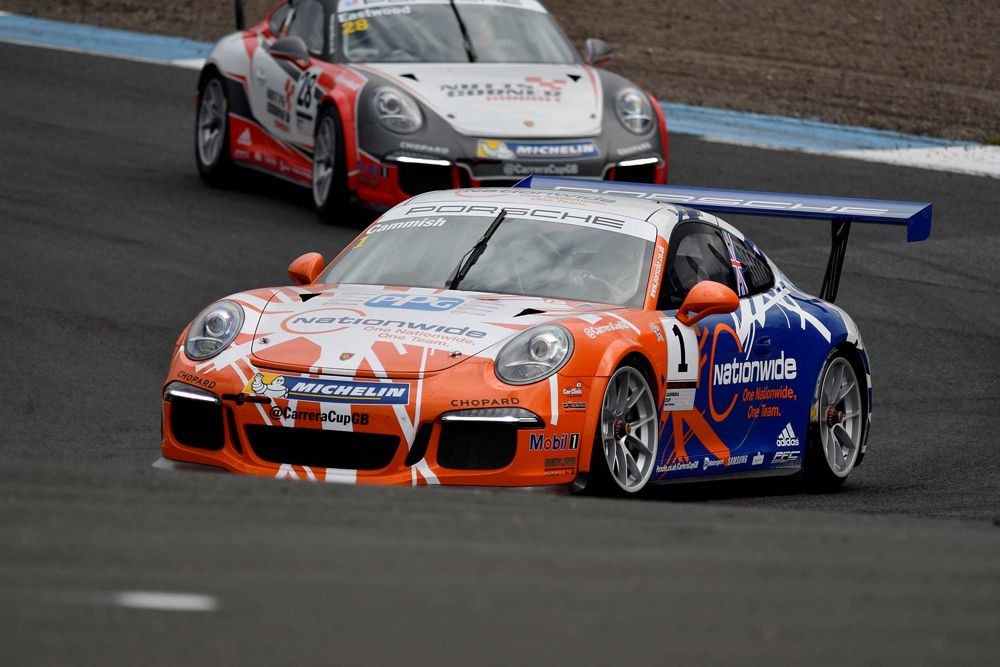 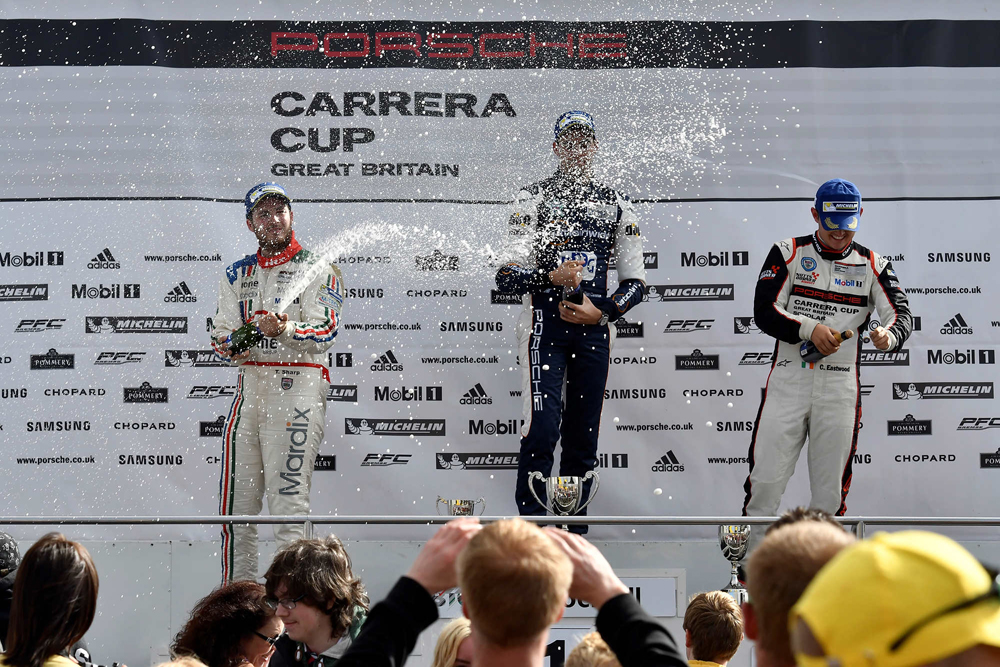 Reigning champion Dan Cammish (Redline Racing) significantly strengthened his chances of back to back titles with a faultless weekend in Scotland. Two pole positions, two fastest laps and two victories – bringing his 2016 tally up to nine – give him a 44 point lead going into the final four rounds.

The characterful Knockhill circuit provided plenty of action, with some of the season’s closest racing throughout the grid. In addition to that of Cammish, standout performances from Alessandro Latif (GT Marques), Euan McKay (IN2 Racing) and Mark Radcliffe (Intersport Racing) added to the excitement.

A clean start for all 20 runners left Cammish leading GB 2016/2017 Scholar Charlie Eastwood (Redline Racing), a position the reigning champion would maintain to the finish line. The gap between the two team mates fluctuated around one second as the pair caught traffic at half distance, but Cammish always looked in control:

“The car was great, we made a good start and it was just about settling into a rhythm. The backmarkers were really good and didn’t really affect things. It’s a long race here and Charlie had some good speed, but we had enough to cover him. I’m just looking to replicate that in the second race.”

Pushing hard all the way was Eastwood, the Rookie’s fastest lap just 0.012 seconds adrift of Cammish’s:

“We got off to a good start, but I dropped away a little over the first few laps then came back in the middle of the race. My fastest lap was only a fraction away so it shows how close we are. We kept chasing, but we didn’t have the pace to close in and get the real result we wanted. Three seconds in a row now puts us in a strong position. There are a few set up changes we’ll make for the second race and push for the win.”

Completing the podium in third was Tom Sharp (IDL Racing), gaining a place as Alessandro Latif (GT Marques) slipped back from the start. After defending well from an early challenge by Lewis Plato (Team Redline), Sharp was relatively untroubled to the line as various battles behind kept his pursuers otherwise occupied:

“We started fourth and felt the best we could manage was third so we’ve managed to achieve that. Everything was done at turn one, I managed to sweep around the outside and then it was a case of keeping out of trouble. It was quite a busy race as it always is at Knockhill, but the traffic gave me a break from Plato.”

Stephen Jelley (Team Parker Racing) had a superb run from eighth on the grid to fourth at the flag, using his experience and race craft to overcome the after effects of his crash at Snetteton. Also recovering well was Tom Oliphant (Team Redline) who pushed Dino Zamparelli (GT Marques) hard in the closing stages for sixth after an early trip through the gravel at Clark’s dropped him back.

Euan McKay (IN2 Racing) celebrated his 21st birthday in style by heading the Pro-Am1 category at his home race to take his seventh win:

“I couldn’t ask for more on my birthday, a win and finishing ahead of two Pros. It’s a big thing winning in front of this crowd, my family and friends at our home circuit. For race two I want to try and maintain my place as we’re starting two places further up overall.”

Also running comfortably in the top ten, brother Dan (IN2 Racing) took second with Sean Hudspeth (Parr Motorsport) once again on the podium in third.

Plenty of action in the Pro-Am2 category ended with a win for Peter Kyle-Henney (Parr Motorsport), his third of the season, followed by another strong showing for Shamus Jennings (G-Cat Racing) in second and class leader Tautvydas Barstys (Juta Racing) in third. Mark Radcliffe (Intersport Racing) had taken the win on the road, but was excluded from the final results after his car was found to be below the minimum ride height.

Kyle-Henney turned around a difficult qualifying session to take the win:

“I put myself in a bad position in qualifying after I made a mistake and put it in the gravel, so the plus side was I had a fresh set of tyres. I used the advantage as best I could on the opening laps, and after I made my way to the front I was able to pull away. We’re lucky that everyone has good respect for each other as it makes the races less frantic. Race two will be harder as it’s a standing start and we’re on the slope.”

Cammish once again made a perfect standing start from pole position, but Latif was slow away which allowed Tom Sharp followed by Tom Oliphant through into fourth and fifth. Cammish settled into his routine, managing the gap to Eastwood throughout to finish with a 2.7 second advantage over the leading Rookie.

Cammish reflected on his perfect weekend:

“We’ve dominated the weekend, the qualifying laps were great and in the races we got away from the front and got two fastest laps with the two wins. The gap is now 44 points to second in the championship, so I can afford to go to the next four races and be there or there abouts. It’s going to be a nice drive home.”

Eastwood was confident following another brace of second place finishes:

“Dan was just a step too far away. He had a slight edge and just didn’t make any mistakes. We’re going to keep chipping away and it’s been a good start to the second half of the season for us. We’re hopefully going to continue it and challenge for second in the championship with some wins.”

Sharp and Oliphant provided some of the best racing of the season so far, Oliphant passing Sharp into Duffus Dip on lap four to take third place. After establishing himself in the final podium position, a tiny mistake from Oliphant let Sharp back through, an advantage he maximised to good effect by establishing a small gap in return. However, on the penultimate lap a mistake from Sharp gave Oliphant the run into Duffus Dip, but the gain of place was short lived as Sharp powered back through on the inside of Leslie’s and held third to the flag.

“It was a really close battle, probably the closest two cars can get without going off. It was very clean racing. We treated each other with respect, but it was close! I didn’t know how it was going to pan out on several occasions, so I’m pleased with third.”

In fifth place was Latif, the improving Rookie driver and series newcomer posting his best result so far on one of the most demanding circuits after qualifying an excellent third for both races.

Euan McKay (IN2 Racing) continued his birthday form with a second win in the Pro-Am1 category, a higher grid slot leaving him battling with Stephen Jelley (Team Parker Racing) in the early laps:

“I couldn’t ask for any more on my birthday, two wins is fantastic in front of my friends and family. The home crowd has been great, it’s packed here and has been an incredible weekend. I’m going to keep doing the same thing until we win the championship, then it’ll be on to the next category.”

Establishing a consistent run of his own, brother Dan McKay (IN2 Racing) took his fourth consecutive podium position in second with Justin Sherwood (Team Parker Racing) third. Front-runner Sean Hudspeth (Parr Motorsport) was denied a finish when he was struck with clutch problems, but John McCullagh (Redline Racing) maintained his perfect 2016 finishing record in fourth place.

A fierce battle in the Pro-Am2 category went the way of Mark Radcliffe (Intersport Racing), who responded emphatically to his race one disappointment with a resounding class win. Tautvydas Barstys (Juta Racing) improved to second, a boost to his championship hopes, while Shamus Jennings (G-Cat Racing) took his second podium of the weekend to earn himself the Driver of the Weekend award.

Despite an early setback, Radcliffe never doubted his ability to take the win:

“I went out with no doubt I was going to win, but typically I stalled on the start. I restarted and got on with it and had overtaken to the front by the fourth lap or so. I got a gap and then just focused on maintaining it. I can’t wait to come back next year.”

With just four rounds remaining the championship form is beginning to reveal itself, while virtuoso performances continue to excite and enthral. The next chapter of the championship will take place on 17 and 18 September at Silverstone’s National circuit. Follow the battles at @CupGB on Twitter and @carreracupgb on Instagram.