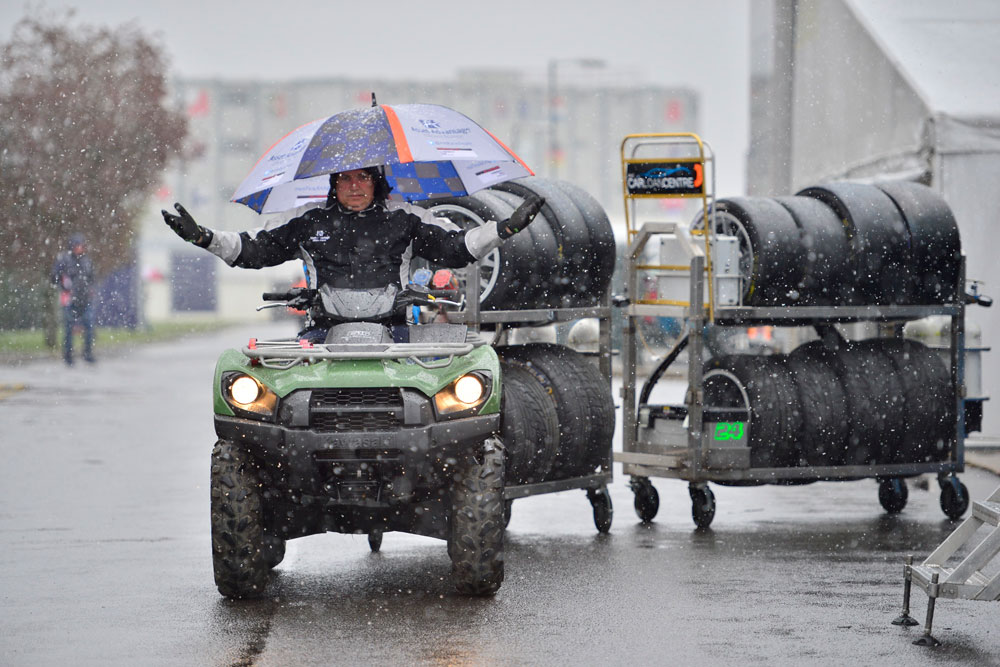 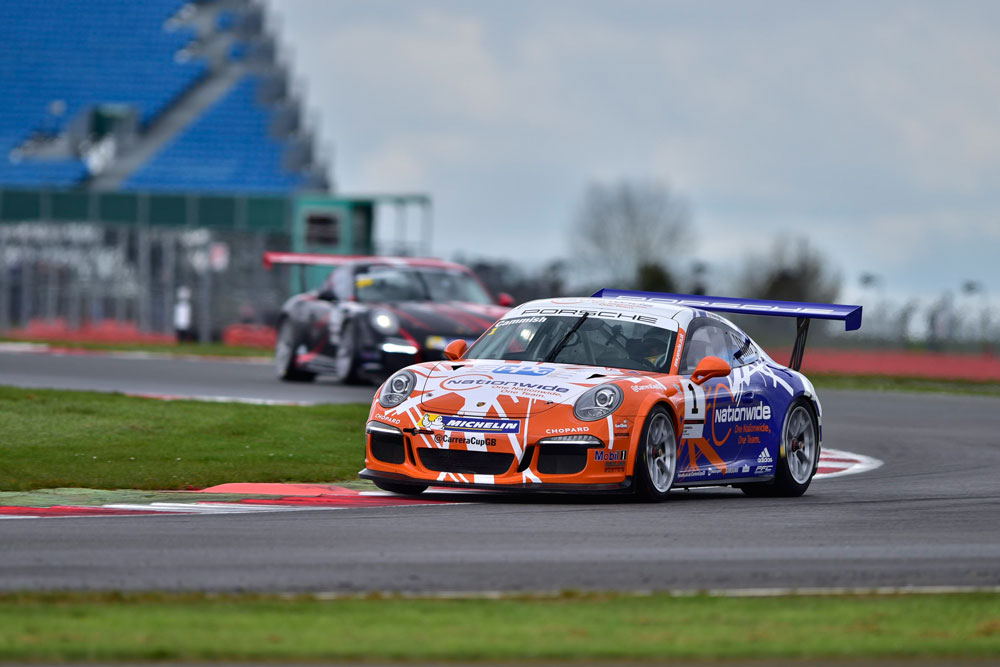 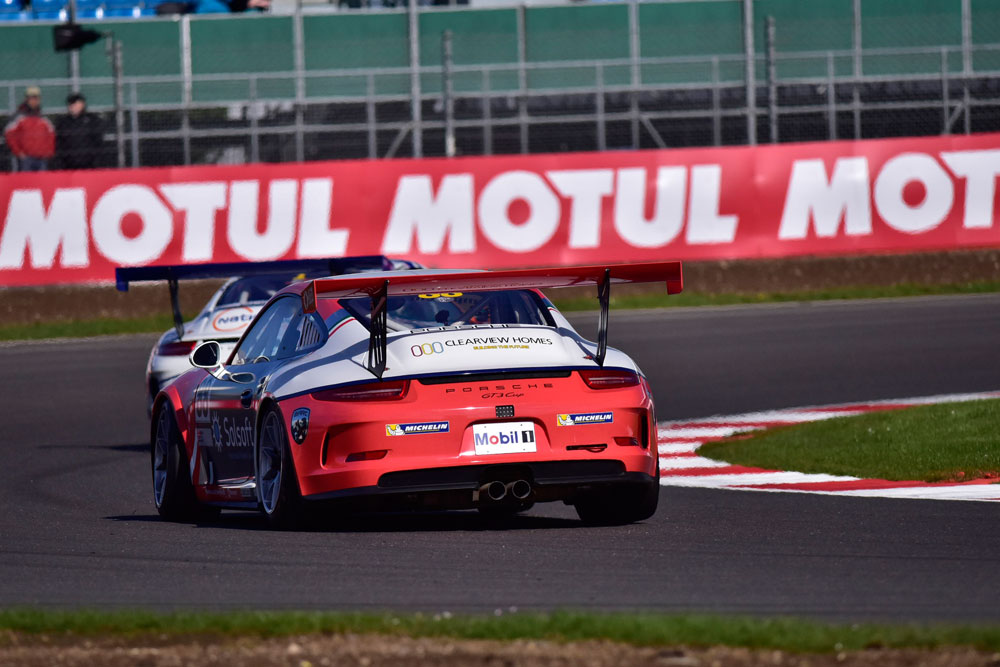 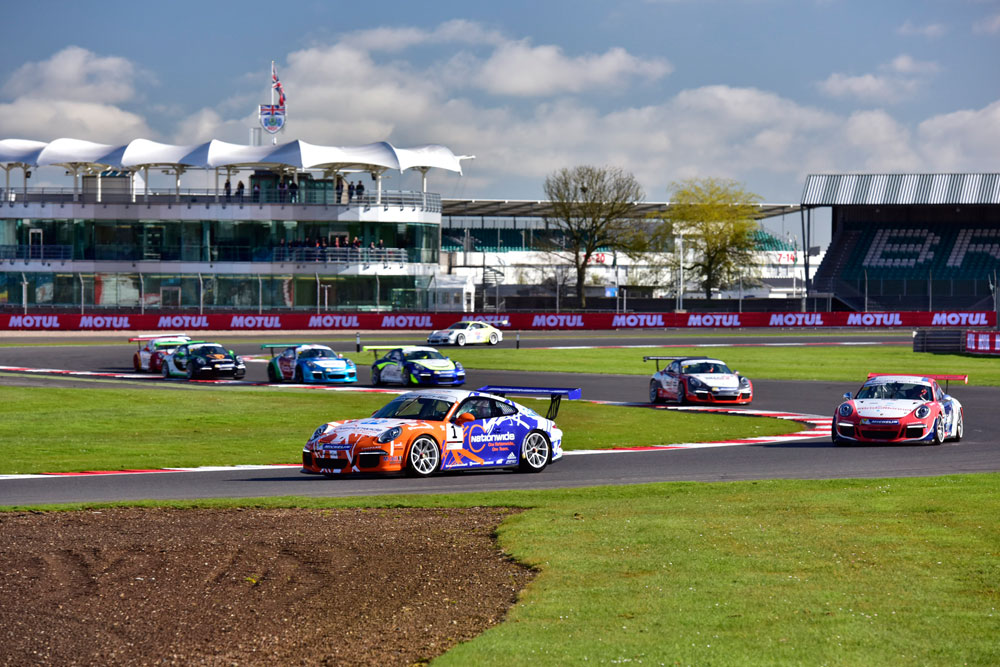 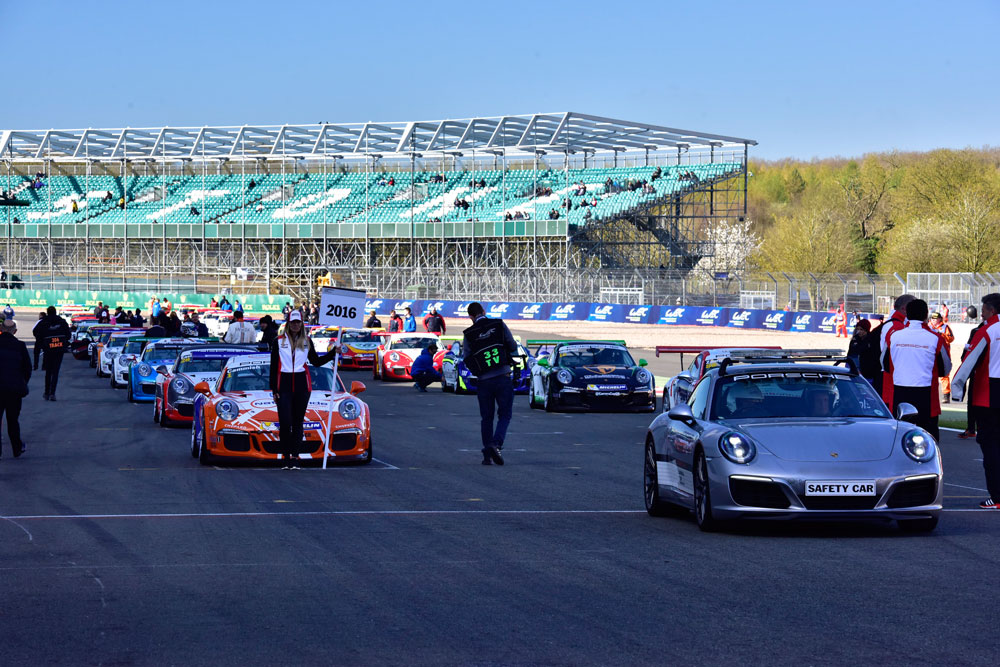 Cammish holds off Zamparelli for first double win of the season as championship dual intensifies Cup GB: Cammish makes it a double with two wins at Silverstone

Race one
Changeable weather and a mix of tyre strategies made for 2016’s most dramatic Cup GB race yet. Dan Cammish (Redline Racing) emerged from unpredictable and non-stop action the winner, producing the masterful performance of a reigning Champion in front of Silverstone’s international audience.

After April showers took a turn for the worse, a surprising and increasingly heavy fall of snow had forced officials to abandon the qualifying session. In such circumstances, the grid is formed in championship order and where drivers are tied on points, the driver with the best result in the previous round will take priority. Following his win in round two, Cammish was awarded pole position from Dino Zamparelli (GT Marques), the pair tied on points, and Tom Sharp (IDL Racing).

Track conditions had improved by the start of the race, although not enough to make tyre choice easy. This was evidenced by an almost 50 / 50 split between those starting the green flag lap on wet or slick tyres. Amongst those in the Pro category, only Tom Sharp (IDL Racing), Stephen Jelley (Team Parker Racing) and Alessandro Latif (GT Marques) started on wets. Sharp and Jelley immediately regretted their decision and started from the pit lane having changed to slicks.

Cammish led the field away for the rolling start, finding enough grip to lead by over three seconds at the end of the first lap. Behind him the action was beginning to unfold, Rookie Charlie Eastwood (Redline Racing) belying his experience by storming from sixth to second, displacing a sliding Dino Zamparelli (GT Marques).

Leading the runners on wets was Alessandro Latif, maximising an early tyre advantage to reach fifth before the circuit dried sufficiently to cause the softer, treaded wet tyres to overheat. As track conditions changed, lap times begin to tumble and Zamparelli passed Eastwood to set after Cammish. The two exchanged fastest laps, but Zamparelli could do more than keep defending Champion Cammish honest, finishing six seconds behind.

Maintaining a solid third place was Charlie Eastwood, while Jonas Gelzinis (Juta Racing) kept out of trouble to end the race a fine fourth. A battle between Tom Oliphant (Team Redline), recovering after an early spin, and team-mate Lewis Plato provided the late Pro category action, with Oliphant emerging ahead. Sharp came back through the field to pass Latif five minutes before the chequered flag, vindicating his decision to switch to slicks.

A delighted Euan McKay (IN2 Racing) held off brother Dan (IN2 Racing) to take the spoils in Pro-Am1, while in Pro-Am2 Tautvydas Barstys (Juta Racing) headed the category with a superb performance, finishing over a lap ahead of Barrie Baxter (Redline Racing) after the Guernsey-based driver surged through the field in the closing minutes.

At a podium ceremony in front of the Cup GB Race Centre, trophies and champagne were presented by Dr. Walliser, Head of Motorsport, shortly after the LMP1 team had completed the World Endurance Championship qualifying session.

Race Two
Despite a late race charge that saw Dino Zamparelli take the fastest lap of the race, Dan Cammish took his first double victory of 2016 with a win in round four by just 0.6 seconds. The intensifying rivalry between the pair saw them push each other clear of the chasing pack, while further battles throughout the field provided some superb motorsport action to compliment ’s presence at the World Endurance Championship.

Clear and sunny conditions were a stark contrast to the snow-affected round three as the 26-car grid, again determined by championship position, lined up for round four. Track temperature of just four degrees made little difference to Cammish, who led the field away from the standing start in determined fashion: “Our car was strong in race one, but race two was probably even tougher as every lap was a qualifying lap. We made some changes to the car which may help us long term, but which might not have been the best way to go here at Silverstone.

“They made the car harder to drive in the second part of the race, but Dino was only really able to catch me on the last corner. I was really happy with how I managed my pace, I didn’t overdrive and kept my head.”

Zamparelli’s charge was not without its challenges, albeit of a different kind: “I was struggling with my belts and was in a lot of pain, particularly through Luffield in the early laps. I definitely lost some time and focus loosening them, then managed to get back into a rhythm. I got the fastest lap and had a really enjoyable race. Dan drove so well, but for us it was the first race on a long circuit where we have been really close to Dan. The car was great, and we needed this race as a platform to build on for the next rounds at Oulton Park.”

Also making good progress was 2016/17 Scholar and leading Rookie Charlie Eastwood, stepping onto the podium once again in just his fourth Cup GB race: “We had a good weekend and moved much closer with a double podium. We were unlucky that the weather ruled out a qualifying session, but I’m happy with our results. It’s a steep learning curve, I need to squeeze out as much time as I can all the time, but that comes with experience and learning all the circuits. I’m giving it my all and the main focus at the moment will be qualifying.”

Another captivating battle behind the lead trio involved Stephen Jelly, Tom Sharp and Tom Oliphant. After swapping places several times in the closing laps, the group ended up headed by Sharp after Oliphant picked up a 0.5 second penalty for passing off the circuit at Stowe.

A flying Sean Hudspeth (Parr Motorsport) fought his way into second, but John McCullagh (Redline Racing) made the most of the opportunity following his own first lap problems in the previous race to win the category: “Two wins from four races was not what I expected when I moved into Pro-Am1 for 2016. My plan has been to keep out of trouble and be there at the end of the race. A mistake in race one when I spun early on in the damp conditions meant I was focused on race two. I’m thrilled to be on the top step of the podium.”

Pro-Am2 leader Tautvydas Barstys (Juta Racing) was also caught in the first lap incident, leaving Graeme Mundy (Brookspeed) to fend off a hard-charging Mark Radcliffe (Intersport Racing) for the category win in his first race of 2016: “Both races were pretty busy, but very enjoyable. For me, it was the first time on slick tyres as the weather had been so bad earlier in the weekend. I kept out of trouble on the first lap and a couple of laps later the tyres came to me. I wasn’t sure where I was in Pro-Am2, so I just focused on my race and am delighted to win.”

The family was equally well represented off the track, with the Club Great Britain turning out in strength. Over 300 cars attended in an overwhelming show of support for the Cup GB, European Le Mans Series and WEC teams, while the on-site Experience Centre provided an exclusive haven for customers.

On a weekend when the international motorsport spotlight was on Silverstone, the Cup GB battled though adverse weather conditions to produce a world-class performance. The next two rounds at Oulton Park on 4 and 5 June look set to see the dual between Cammish and Zamparelli intensify, as both leave Silverstone focused on analysing the weekend and their performances. In Pro-Am1 just four points separate the top three, while in Pro-Am2 the difference is an even closer three points.

Keep up to date with the Championship by following us at @CupGB on Twitter and visiting www.porsche.co.uk/CupGB.