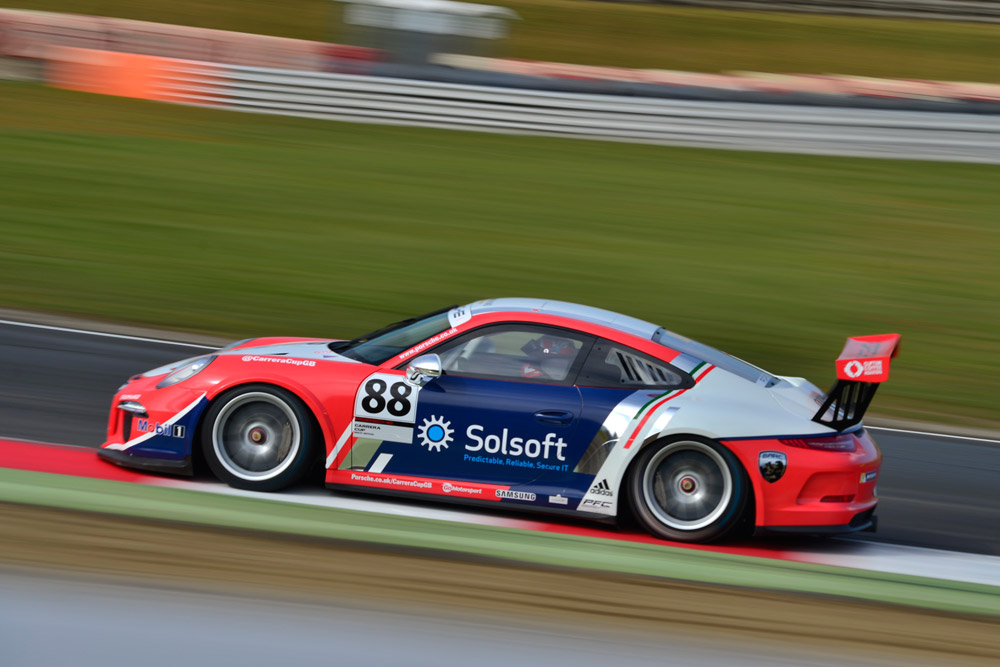 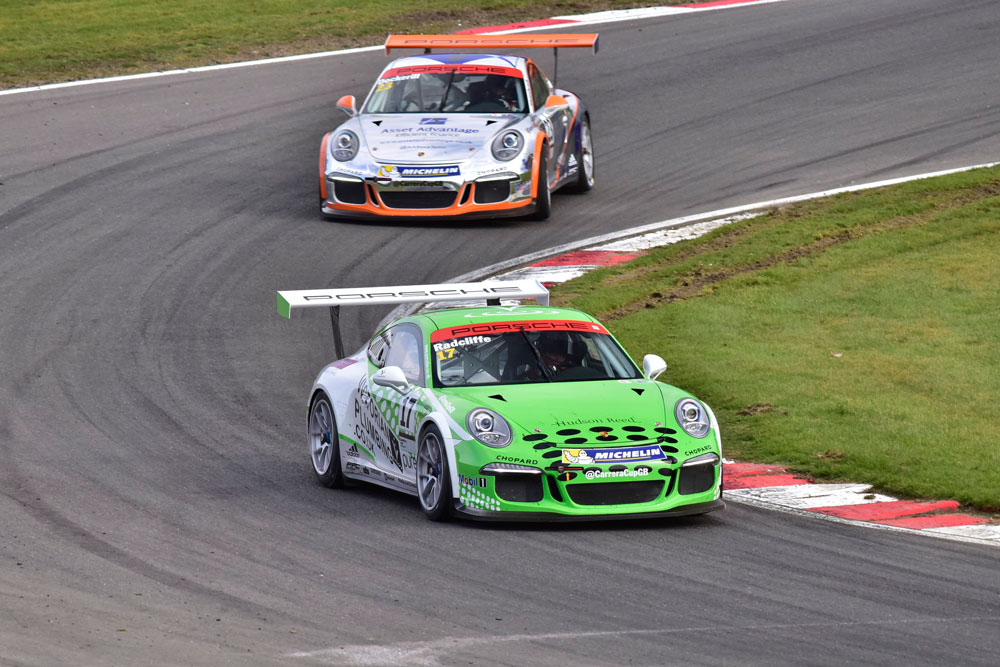 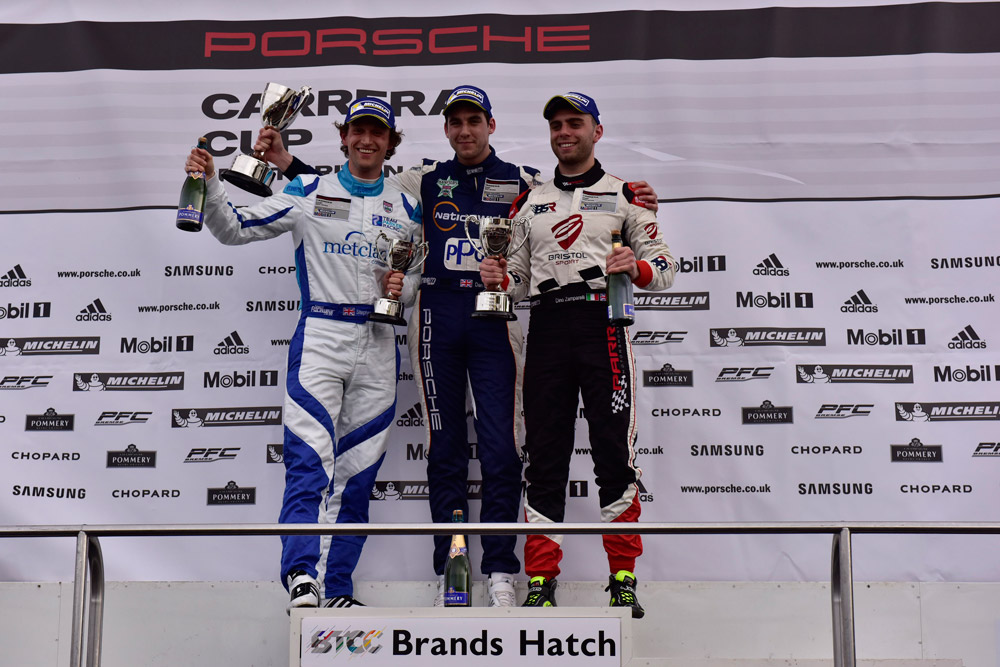 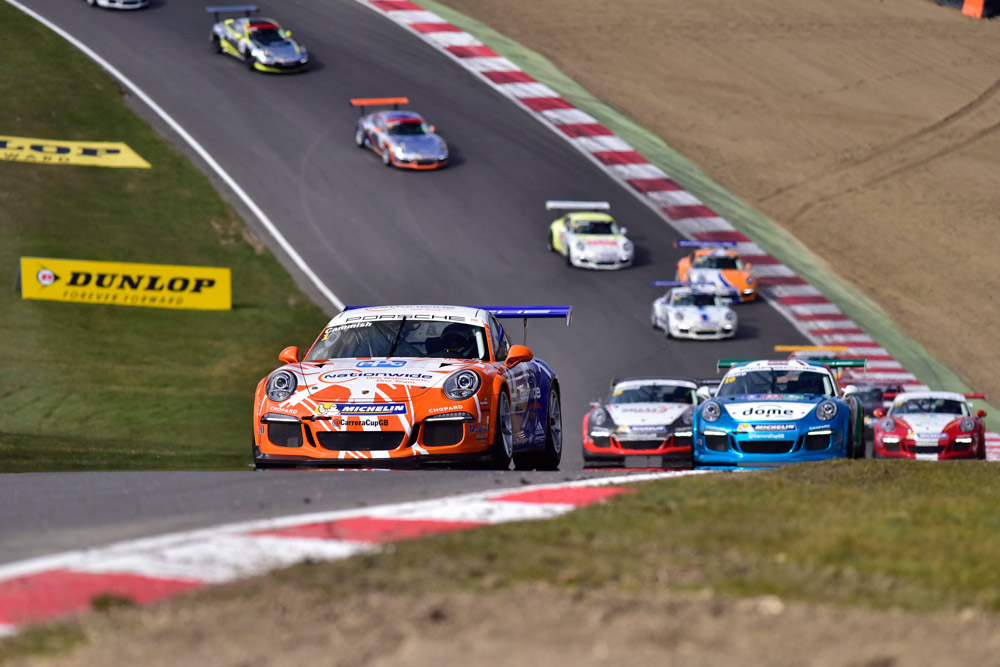 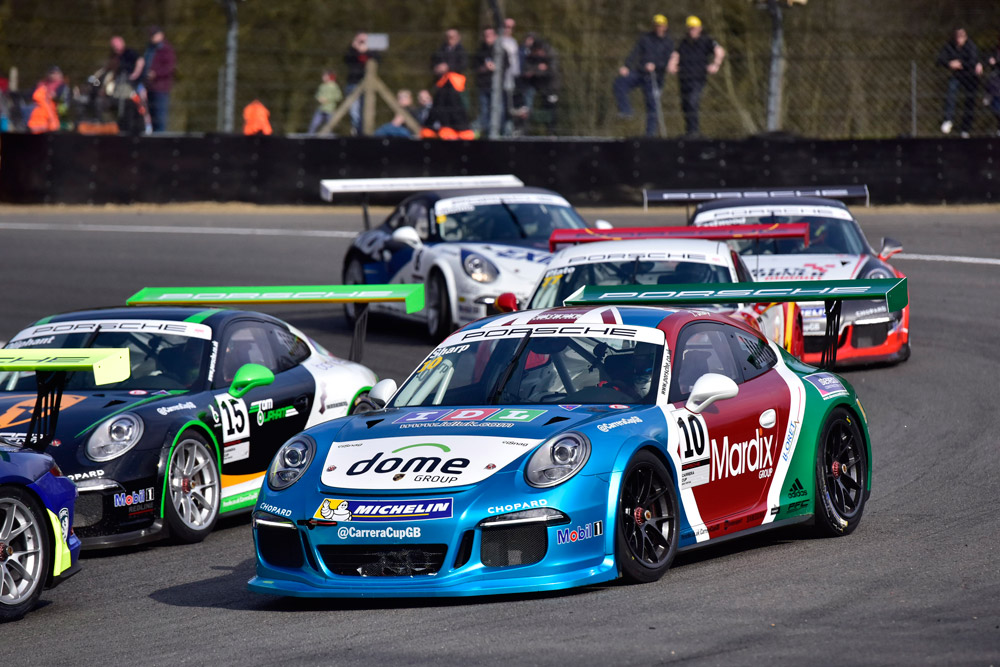 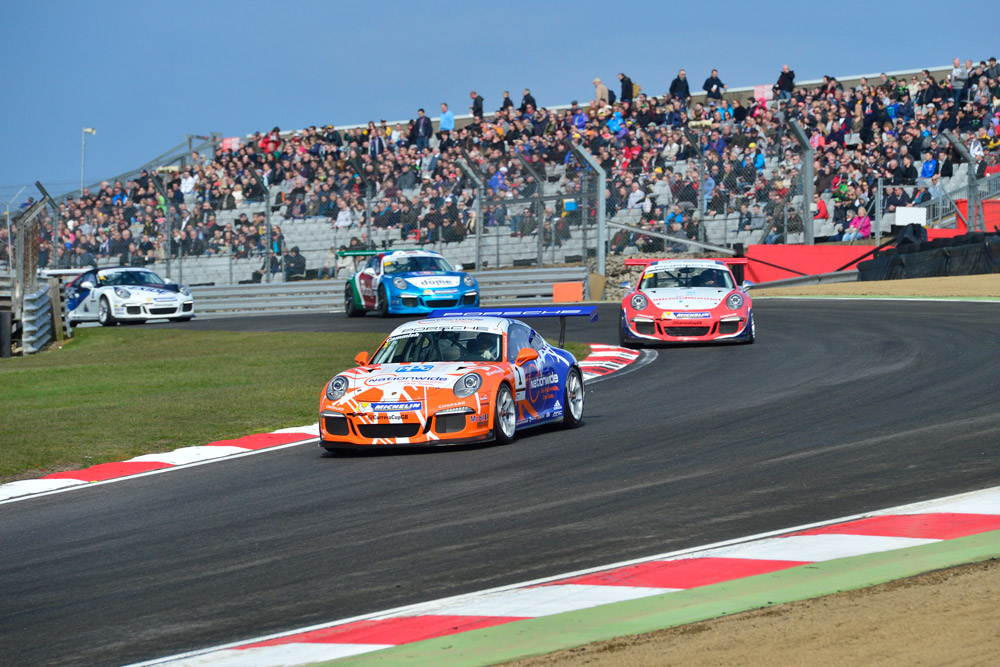 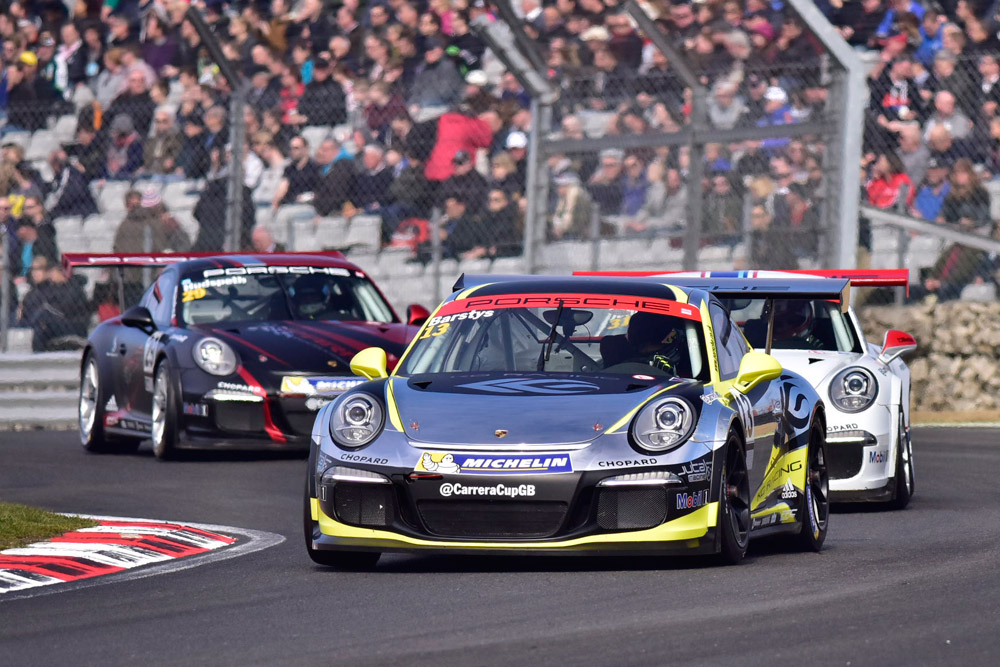 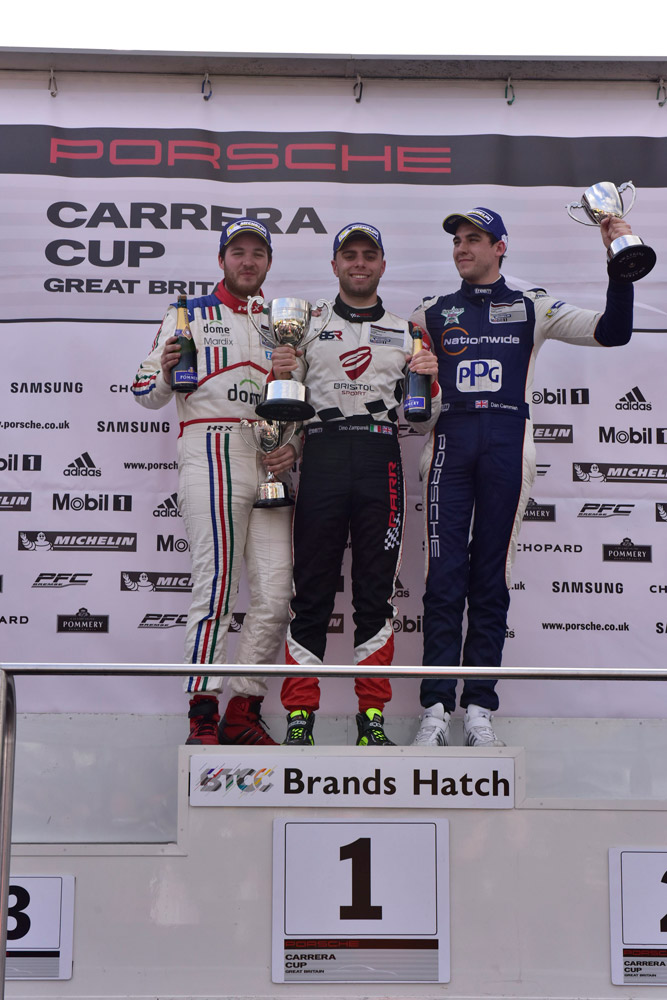 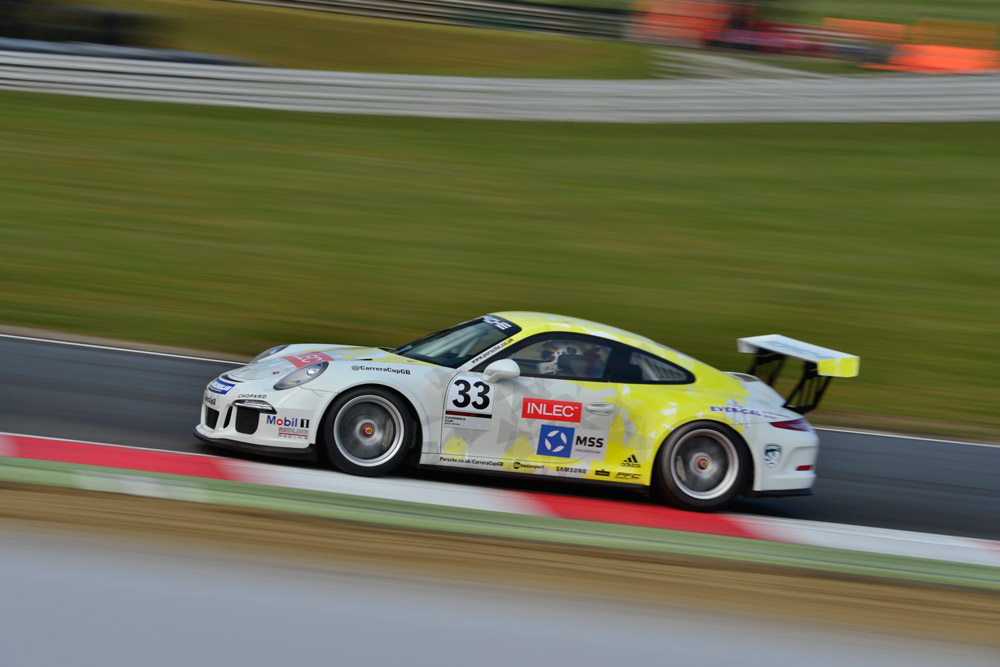 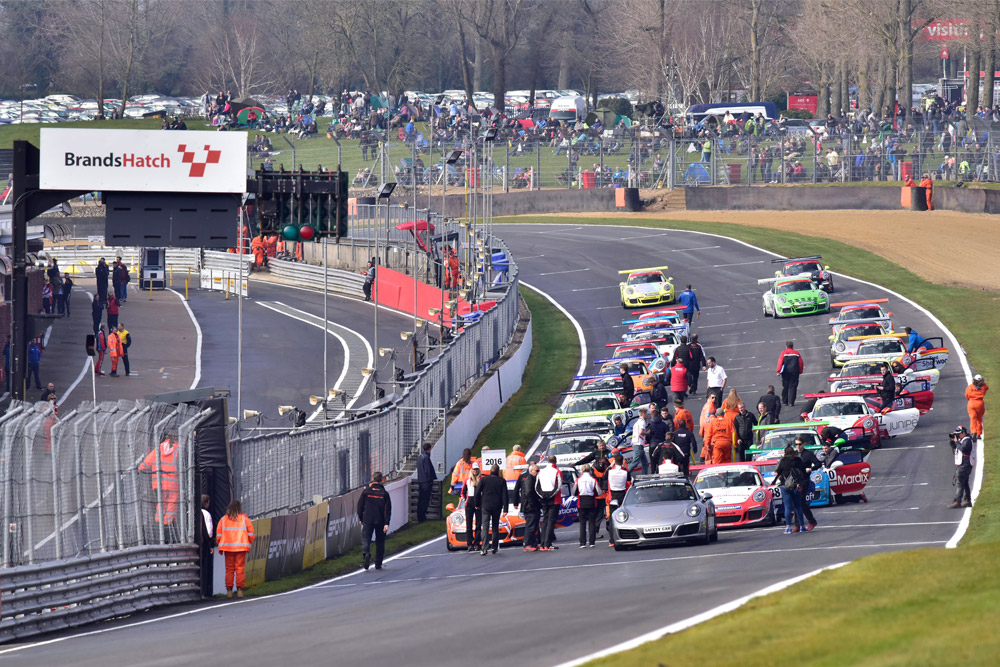 Tricky early morning conditions intensified the anticipation ahead of the first round of 2016’s Cup GB. A cold, damp track greeted the Class of 2016 as reigning Champion Dam Cammish (Redline Racing) led the field away from pole position for the rolling start of race one.

A clean start was followed almost immediately by drama at Graham Hill bend, with newcomer Sean Hudspeth (Parr Motorsport) spinning on the damp part of the track and Peter Jennings (G-Cat Racing) coming together with Mark Radcliffe (Intersport). Tom Sharp made an early move on Jonas Gelzinis (Juta Racing) to secure third spot, with Scholar Charlie Eastwood (Redline Racing) stamping his authority on the Rookie category after a similar move saw him take fourth.

As Cammish eased out a lead over the pursuing Dino Zamparelli (GT Marques), Alessandro Latif (GT Marques) made contact with Tom Oliphant (Team Redline) on the run into Druids, damaging his radiator. The race went from bad to worse for the number 17 car when Latif made heavy contact with Dan McKay who had spun exiting Graham Hill. Both cars needed to be recovered and the circuit cleared, bringing out the safety car.

As the race restarted, the tricky conditions were made worse when contact between Hudspeth and Shamus Jennings (G-Cat Racing) saw Hudspeth’s car leaking coolant as he returned to the pits.

The battle for overall honours became a two-horse race, as Zamparelli pushed Cammish hard to extend the pair’s lead over the chasing pack. The pace was relentless, both drivers swapping fastest lap and pushing to the limit. First to exceed the limit was Cammish, the 26-year-old picking up a five second penalty in the final stages of the race for exceeding track limits which handed victory to a grateful Zamparelli: “Dan drove really well, it’s tough being the first car to a corner in really challenging conditions. My job this weekend has been to put him under pressure, and after qualifying our goal was to secure the fastest lap which we did. To take the win after the penalty was a bonus, but a win is a win.”

Echoing Zamparelli’s thoughts about the conditions was third-placed Tom Sharp (IDL Racing): “It was a very eventful race and conditions made the start tricky. I passed Jonas on the opening lap into Surtees and managed to hold third to make the podium, which is always nice in the Cup.

“I went into the race just wanting to hold fourth and managed to exceed that. The conditions stayed difficult, with patches of fluid all around the circuit. This year I think there will be more winners which will make consistency important. Our aim is a podium in every race.”

Pushing Sharp hard was top-placed Rookie Charlie Eastwood: “I made a good start and managed to squeeze past Jonas into Druids on the second lap. Just staying on the track was a challenge, especially at Graham Hill where there was fluid down. Getting solid points from race one is good, but I’m a racer and always want more!

“There were a lot of firsts for me in that race: my first time dealing with traffic, first time making a rolling start. I lost time in the traffic which made it difficult for me to close back up to Tom, but the noise and experience of the rolling start was incredible.”

In Pro-Am1, John McCullagh (Redline Racing) was immediately on the pace following the reigning Pro-Am2 category Champion’s last-minute decision to move up a category for 2016. McCullagh pushed Rookie Euan McKay (IN2 Racing) hard before making his move on the last corner of the last lap to take the win: “The race was action-packed, but I made a good start and kept out of trouble. The wet, slippery conditions made it really hard to get heat into the tyres, but the safety car period actually gave me the chance to make sure they were fully up to temperature. After the restart, I just kept out of mischief and picked my way through the field. I had a great battle with Euan, and only found a gap on the last corner of the last lap.”

A similarly hard-fought battle in the Pro-Am2 category saw Lithuanian driver Tautvydas Barstys take the first category win of 2016 ahead of Peter Kyle-Henney (Parr Motorsport). After leading early on, a slow run out of Paddock Hill Bend allowed Barstys through to secure the win by less than a second.

Pole-sitter Dan Cammish (Redline Racing) stormed back from his disappointment in race one to take a lights-to-flag victory in the second race of the weekend. The former Formula Ford champion proved utterly dominant and never looked like relinquishing the lead on his way to victory.

Cammish said of his second race: “I was very disappointed by this morning as to me the five second penalty for track limits didn’t take into account the fact that as race leader I was the first to encounter the really variable track conditions. In race two I was out to make amends, and think I made my point on the track.”

Race one winner Dino Zamparelli (GT Marques) had to settle for second in race two, despite again setting the fastest lap of the race: “I’m really happy with our weekend and proved our intent. Two fastest laps shows we have the one-lap pace, but our focus has to be understanding how to maintain this over longer runs. A longer circuit like Silverstone for the next two rounds will probably show us more and in the meantime we have something to work on.

“Dan drove really well, he’s the reigning champion for a reason. Our pace is there and I haven’t been off the podium since I joined GT Marques last season.”

A race-long battle for third place was the highlight of the Pro category though, with the experienced Stephen Jelley (Team Parker Racing) making a good start and trading paint several times with Tom Sharp (IDL Racing) as the pair went side to side time and again.

Jelley commented: “It was a nerve-wracking race and on such a short circuit the backmarkers made things tough to keep position. The team said to me before the race I should get stuck in, so I did! It was a defensive drive, but one where I felt I made the best of the opportunities that came my way. To be back on the podium is a monkey off my back as it’s been a while since I was last here. Team Parker Racing has a great setup for the car and I feel we can operate at this level with a solid pace.”

Also in the battle for third was newcomer Tom Oliphant (Team Redline): “I was really focused on getting a good start as I was further down on the grid for race two. We used the better tyres from qualifying and had a good pace. My aim was to get into the top five so I just pushed and pushed. Once I caught up with Stephen there wasn’t a way past, but I’m really happy with a fifth and fourth in my first Cup GB outing.”

After an eventful first race, a delighted Sean Hudspeth (Parr Motorsport) underlined his pace with a comfortable win in the Pro-Am1 category: “I was unlucky in race one, but sometimes it goes that way. It was nice to be on the pace of the Pros in race two, I just cleared my head and focused on the race always looking forward. I’m happy to have given the team the result they deserved, it was a good end to my first ever race weekend in a GT championship.”

On the top step of the podium in Pro-Am2 was Mark Radcliffe (Intersport), the newcomer harnessing his pace and experience from race one to recover from a bad start in race two: “I had a disappointing first race and was very anxious about the standing start for race two. I struggled to get away, but made up time and started to pick off the cars ahead. I seemed quicker through Surtees and kept pushing. Like any driver, I’d like to progress through the classes and there’s so much to learn. Our win in Pro-Am2 is all the sweeter as the team has been down on numbers today, so I’ve been getting stuck in with running the car too.”

Intersport were awarded the trophy for ‘Team of the Weekend’ as a result of their hard work. Recipient of the ‘Driver of the Weekend’ award was Justin Sherwood (Team Parker Racing), who took third and second places in Pro-Am1: “I really enjoyed my weekend and my pace in race two was really surprising. The team gave me a really good car but I made a bad start although I wasn’t the only one. The gap to Sean ebbed and flowed through the traffic, but I’m really happy with my first two races back.”

Another noteworthy drive was that of Dan McKay (IN2 Racing), who started race two from the back of a grid in a different car following a heavy collision in race one: “The team set up the spare car really well and I had total confidence in it. It was a really tiring race, but to make it into third in Pro-Am1 was not what I expected. I just kept my head down and kept passing cars.”

The next Cup GB races will take place at Silverstone on the weekend of 16 and 17 April in support of the prestigious FIA World Endurance Championship. In the meantime, keep up to date by following us at @CupGB on Twitter and visiting www.porsche.co.uk/CupGB.