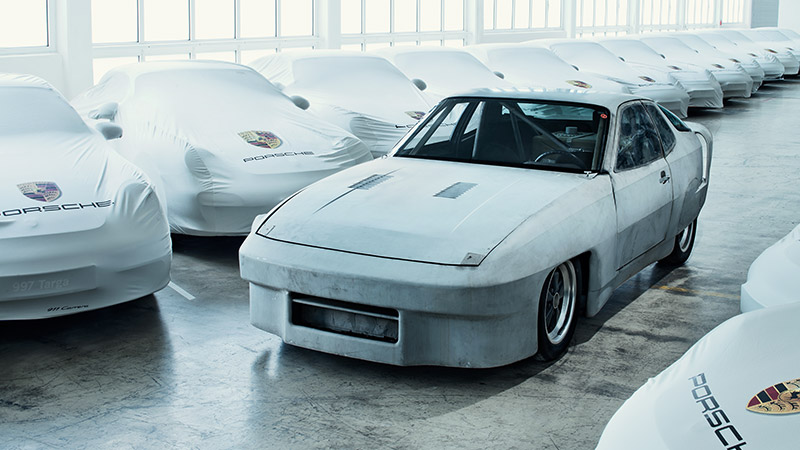 World record car: With the 924, broke new ground in 1976. As a timely response to the energy crisis, the attractively priced and economical four-cylinder sports car was intended to appeal to potential new customers. wanted to go in new directions in terms of marketing, too, and planned to draw attention with a high-speed world record drive. The goal of an average speed of over 250 km/h over a distance of 10,000 miles required a 924 optimized for long-distance rec­ords. The result: instead of the standard 92 kW (125 hp), the turbocharged world-record four-cylinder put out a splendid 184 kW (250 hp). The aerodynamics also received special attention. After extensive wind-tunnel testing, the drag coefficient was an outstanding Cd 0.268, which enabled a top speed of 280 km/h. Shortly before the planned record-breaking drive in July 1977, the world-record attempt was put on ice for strategic reasons. Instead of ripping around the high-speed oval of Nardò, the fastest 924 of all time rolled into the newly founded Museum. 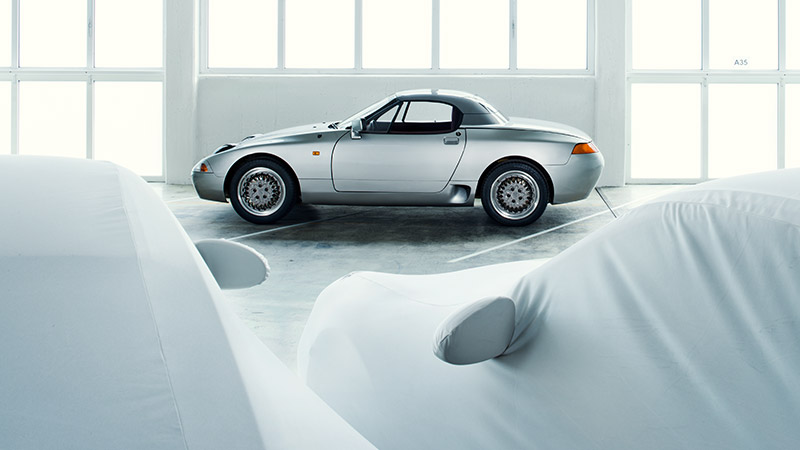 Sports two-seater concept car: As a study for a future vehicle concept, between 1984 and 1987 the Development Center in Weissach worked on a compact, lightweight, and aerodynamic roadster. The project was inspired by a development job previously undertaken for the Spanish automaker Seat. As a small and relatively inexpensive sports car in the price range of 40,000 German marks, the 984 was designed to appeal to a young, sporty clientele. The development objective was primarily focused on dynamic driving characteristics, to be achieved through low driving resistance rather than massive engine power. Low fuel consumption was also defined as a development objective. A drive concept with an air-cooled two-liter, four-cylinder rear boxer engine and an output of 88–110 kW (120–150 hp) was aimed at emphasizing the technological distinctiveness of the model. A convertible version with an innovative folding hard-top was envisioned, as was an all-wheel-drive model for motor racing. The sales crisis precipitated by the plummeting dollar in 1987, however, put an early end to the 984 project. 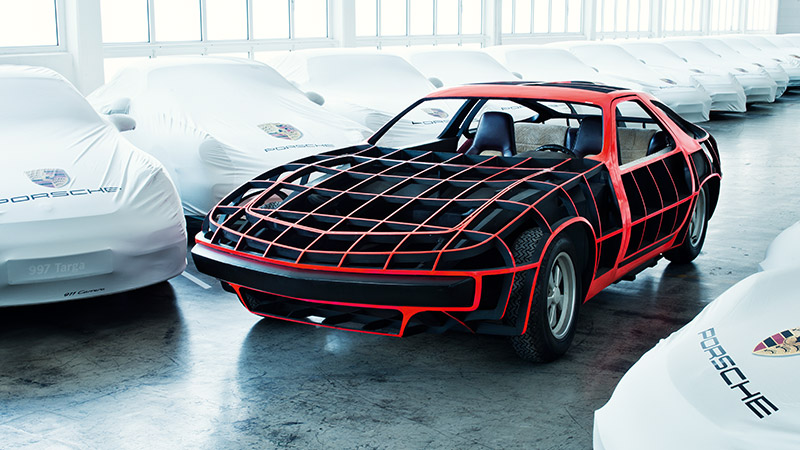 Research car: Commissioned by the Federal Ministry of Research and Technology, in 1978/79 developed a concept for the construction of a future sports car. The development objectives for the four-seater Type 995 concept car focused in particular on fuel economy, safety, and noise emissions. The engineers in Weissach used a 928 as the technological basis for the research prototype. Special features of the concept car included a five-speed double-clutch transmission in conjunction with two low- consumption gas engines. Plans envisioned a high-compression three-liter V8 engine with automatic cylinder de­activation as well as a 2.2-liter four-valve, four-cylinder alter­native. The gear-shifting of the double-clutch transmission was electronically controlled without letting up on the gas, which contributed to the high efficiency of the drive system. In combination with a lightweight, aerodynamic aluminum body, the calculated consumption came in under 9 liters per 100 km. In addition to a comprehensive package of passive safety measures, an optimized anti-lock brake system enhanced active driving safety. 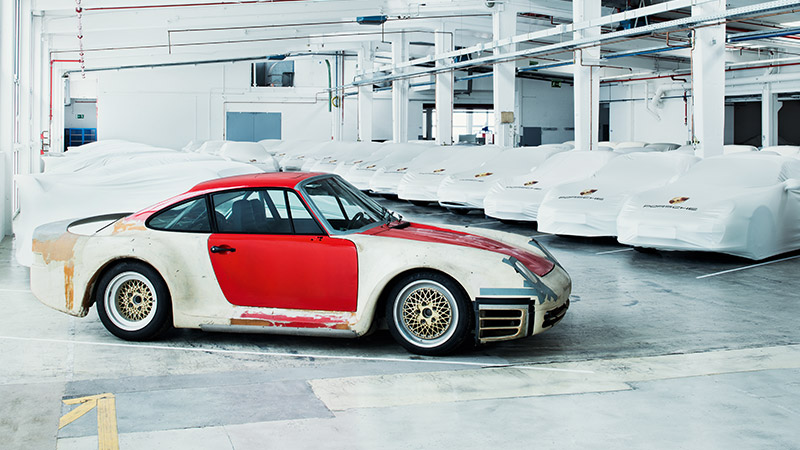 C29 aerodynamics study: At the Frankfurt International Motor Show in 1983, presented a high-performance vehicle that would provide an impressive demonstration of the brand’s innovative drive: the “Group B” study. The production-ready version of the concept known as the 959 underlined the technical expertise of the company in 1985. Powered by a 331 kW (450 hp) boxer engine with ­water-cooled cylinder heads and bi-turbo sequential charging, the car topped the 300 km/h (186 mph) barrier with playful ease. The electronically controlled chassis, the program-controlled all-wheel drive, and the aerodynamically optimized body broke new ground for later sports-car generations. As the predecessor of the 950, the Type 959 C29 repre­sented the beginnings of this ambitious project. It was used for exten­sive wind-tunnel testing in 1982, which resulted in a low Cd-value of 0.31 paired with an optimal lift coefficient. The special characteristics of the C29 include the rear wing integrated in the bodyshell, the smooth transition from the windshield to the A-pillar, and the aerodynamic plastic underbody cover. 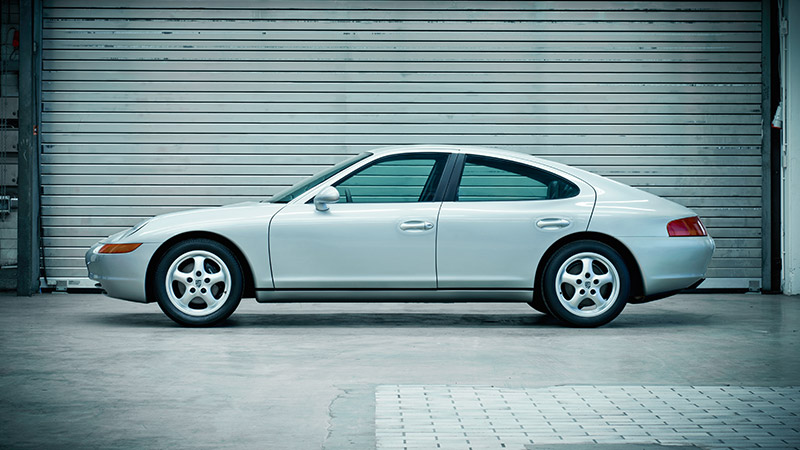 Concept car: With in the midst of an economic downturn in the late 1980s, it was decided in 1988 to begin development on a new model line with a project named 989. As a four-door “family sports car” or “ for more than two,” the front-­engine V8 sports sedan with rear-wheel drive was to hit the market by 1995 and target a new market segment. But even during the initial project phase, development costs for the technically sophisticated four-door rose to improbable heights, making it impossible to keep the purchase price below 100,000 German marks. When the price calculation ultimately topped 150,000 German marks and the envisioned annual production quantity of 15,000 units could not be achieved economically, the supervisory board stopped the project in January of 1991. The efforts were not entirely in vain, however; many of the ideas and detail solutions found their way into future models such as the 996 type series of the 911. 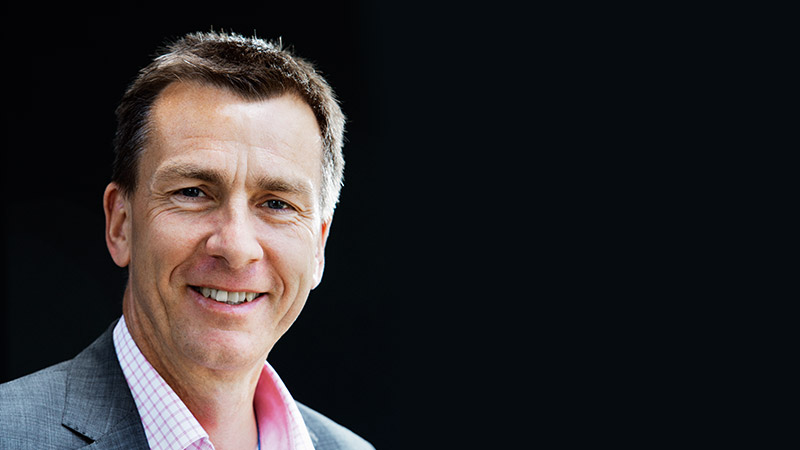 So software versus hardware is only an apparent contradiction?
The key is ultimately the intelligent interaction of digital and real prototypes. It was the only way we could develop the super sports car 918 Spyder in record time. But simulation does have its limits. Only in a real prototype do we see how the vehicle reacts under real-life conditions. And for every , those real conditions include use at the limits of performance, such as on the racetrack. So every is put through its paces on real asphalt. Ultimately, it’s the lap on the Nürburgring that counts. And of course, the prototype also has to pass the endurance test. No simulation, no matter how good, can determine the wear on the vehicle after 150,000 kilometers on real roads and testing grounds.