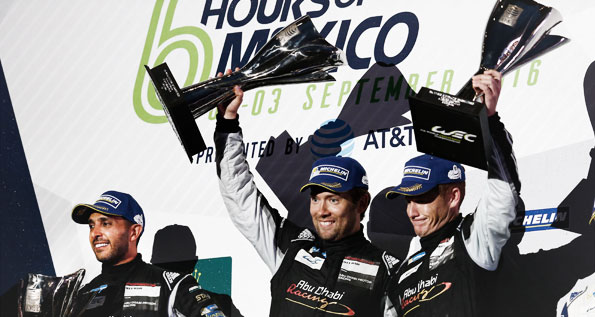 In the GTE-Pro class the situation was looking promising for third place for the works drivers Richard Lietz and Michael Christensen in Dempsey Proton Racing's 911 RSR, but as rain set in about halfway through the race on the Mexico City Grand Prix circuit at a 2,310-metre altitude, they dropped down the field after making an unfortunate tyre choice. The pair took the flag in sixth place.

Richard Lietz ( 911 RSR #77): "My first stint was good with consistent lap times. The balance of our 911 RSR was great and we were fast. Before my second stint it started to rain and we had to make a difficult decision regarding the tyres. With the benefit of hindsight, it would definitely have been better to opt for wets and then change to new slicks. However, we decided to stick with the used Michelin rubber and this unfortunately proved to be the wrong decision.
Michael Christensen ( 911 RSR #77): "The first half of the race went very well and our 911 RSR turned consistently fast laps. But once the rain started we unfortunately made the wrong choice with our tyres. Because of this we lost time and positions. Afterwards we no longer had a chance to make a comeback and fight for a podium position."
Wolf Henzler ( 911 RSR #78): "That was a very eventful race. We were looking good in the fight for victory, but towards the end we had to pit again to switch drivers and that put us back to third place. It's a pity really, because everything was running smoothly: The team was super, our pit stops were perfect and the lap times were great, too. Now we're heading to Austin where we aim to do everything right. Hopefully it'll also be good enough for a victory."
Patrick Long ( 911 RSR #88): "The big challenge at this race was to find the perfect strategy. Our 911 RSR was fast and reliable for all track conditions over the distance. That made the difference today. I'm very proud of my teammates. Khaled and David drove an immaculate race and they didn't make a single error. We've known all along that we're a strong trio and, no matter what happens around us, we can win. I'm thrilled for them and the entire team about this win."
Khaled Al Qubaisi ( 911 RSR #88): "That was nerve-racking. The final phase was particularly stressful. We were often very close to winning in the past, but something always happened to prevent it. Today everything came together. I'm happy and grateful for our first victory in the WEC. That's fantastic for the whole team."
David Heinemeier Hanson ( 911 RSR #88): "That was really crazy race. The rain towards the end made things more exciting than we would have liked. We made less mistakes under these difficult conditions compared to our competitors and we took a well deserved win. It's great to finally climb to the top of the podium."

Round six of the Sports Car World Endurance Championship WEC will be contested in Austin/USA on 17 September.

Please note: Photo and video material from the Sports Car World Endurance Championship WEC is available for journalists from the Press Database on https://presse.porsche.de. The Twitter channel @Races provides live updates with the latest information and photos from race tracks around the world. Journalists also have access to the digital Motorsport Media Guide on https://presse.porsche.de/motorsport. Communication provides a new service for journalists, bloggers and online multipliers under www.newsroom.porsche.com. Up-to-date video news can be downloaded from www.vimeo.com/porschenewsroom.