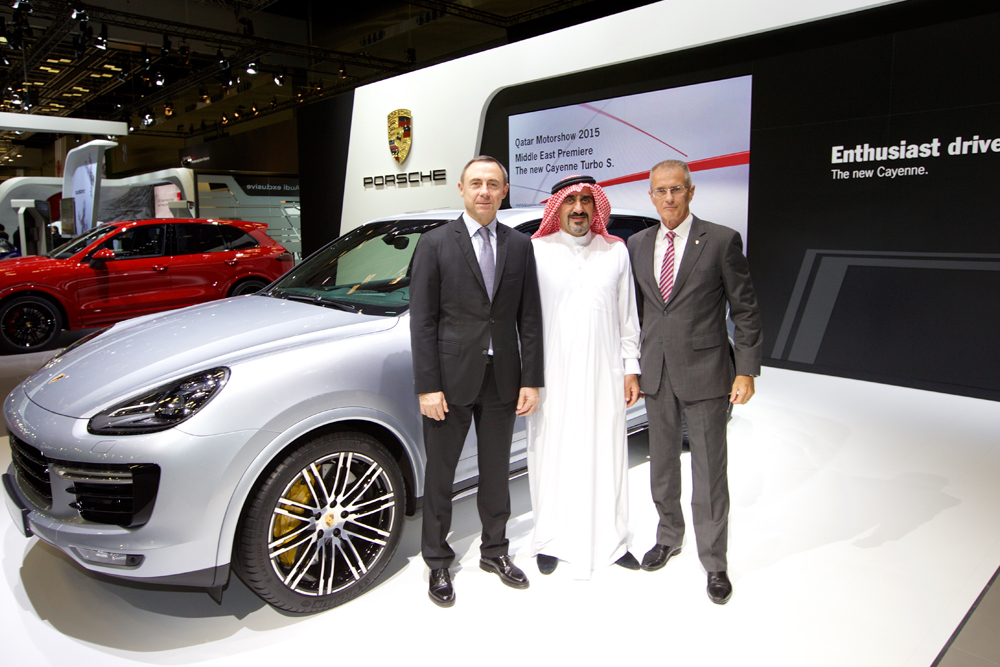 Doha. The 2015 Qatar Motor Show today played host to ’s latest automotive advancements in the form of four stunning regional premieres as the brand revealed a new age of performance benchmarks within the motoring industry. Following a milestone 2014 which saw growth for globally and across the Middle East and Africa region, the brand is continuing its exceptional legacy through pioneering steps in 2015.

Recording a 17% increase in new car deliveries worldwide, also delivered 7,682 new cars in the GCC with substantial growth recorded in the key markets of Saudi Arabia, Oman and Lebanon. Qatar also posted a robust performance led by a 20% increase in sales of the iconic 911 with the sentiment being reflected across the Gulf region where sales of the same model grew for the second consecutive year.

Making a significant contribution to regional sales was ’s record breaking super sports car, the 918 Spyder. Boasting superlative performance both on the track and on public roads, 101 of the limited edition plug in hybrids were sold in the GCC alone representing a substantial global share of the 918 models available worldwide. The top selling regional market for the 918 Spyder was Dubai (29) with Qatar (20) second and Saudi Arabia third (19).

’s two-door models now represent an impressive 27% of its model share across the GCC with sales of the and up by 39% in Qatar, showcasing the country as a vibrant sports car market. The introduction of the powerful new in 2014 ensured demand for the model remained high while the segment-leading proved to be extremely popular in the GCC with close to 1,000 vehicles sold within the first nine months of the car’s launch.

Building on the solid performance of 2014, thrilled audiences at the Qatar Motor Show as they unveiled two exciting derivatives of the to regional crowds for the first time. Boasting outstanding credentials for high-performance athleticism, the GTS and S are standout extensions of ’s commitment to developing the highest standard of everyday sports cars.

The landmark auto event also allowed the motoring industry and enthusiasts from across the Middle East a first look at two more of ’s latest automotive benchmarks. Stealing the show was the latest incarnation of a historic bloodline, the 911 4 GTS, a car which embodies the meaning of power, dynamism and exquisite style. A very special fourth regional premiere also delighted audiences in the form of the Series. Based on the S the new model delivers a level of luxury and unique craftsmanship that is unrivalled in the automotive sector.

The motor show, held at the National Convention Centre in Doha, also gave the knowledgeable crowds the opportunity to examine three more of ’s latest benchmarks. Embodying the spirit of , the 911 S Coupe is a car with 40 years of distinction and evolution which has continued to reach new highs. Correspondingly it represents the first strand of DNA from which all models stem. True to this, the uniquely powerful third generation S displayed its heightened dynamics and exceptional agility along with the , the true sports car of the compact SUV segment and a standard-setter in terms of driving dynamics and enjoyment.

Speaking at the Qatar Motor Show Christer Ekberg, Managing Director of Middle East and Africa FZE, said: “The Qatar Motor Show is an event which continues to attract global recognition for its positive impact on the automotive industry and the region in general. Today has been another milestone for Middle East and Africa with the unveiling of our exciting new models, the 911 4 GTS and the inimitable Series.”

He added: “Through the cars unveiled here today in Doha, we have showcased ’s commitment to producing vehicles which deliver the highest levels of performance, precision and driving pleasure, all packaged within the typical design.”

’s latest pioneering achievements were initially showcased in Qatar through the standout models, the S and GTS. The S is the series’ top model representing exclusiveness and superlative performance. With 570 hp and a chassis that is equipped with all of the systems available in the model series as standard. The S sprints from 0 to 100 km/h in 4.1 seconds and combines extraordinary comfort with extreme sportiness.

Boasting outstanding lateral dynamics and raw passion, the GTS delivers 440 hp for a 0 to 100 km/h time of 5.1 seconds when equipped with the Sport Chrono package. 0.6 seconds faster than its predecessor, the GTS asserts a high-performance engine and chassis, robust engine sound and extends the sporty heritage of the GTS bloodline which dates back to 1964.

Building on that same heritage, the 4 GTS is the most dynamic in the range with a 430 hp engine taking the car from 0 to 100 km/h in 4.3 seconds thanks to the standard Sport Chrono package, PASM chassis and the wider 20-inch wheels. From any viewing perspective the can be identified as a GTS model with the specially designed front end, smoked headlighEmbodying the pinnacle of automotive innovation the 911 4 GTS, GTS and S will be on display in hall 9, stand N, Qatar National Convention Centre, from 6th – 10th February 2015.ts and silky black gloss wheels with central locks.

Completing the superstar headline group at the Qatar Motor Show was the exquisite Series. Tailored to a new level of individuality this special model redefines luxury performance. The base model of the S with a 570 hp engine accelerates from 0 to 100 km/h in an incredible 3.8 seconds. Inside and out the model is reimagined through incomparable craftsmanship and styling, featuring countless exclusive options including a high-quality leather interior and bespoke metallic black and chestnut paint blend.