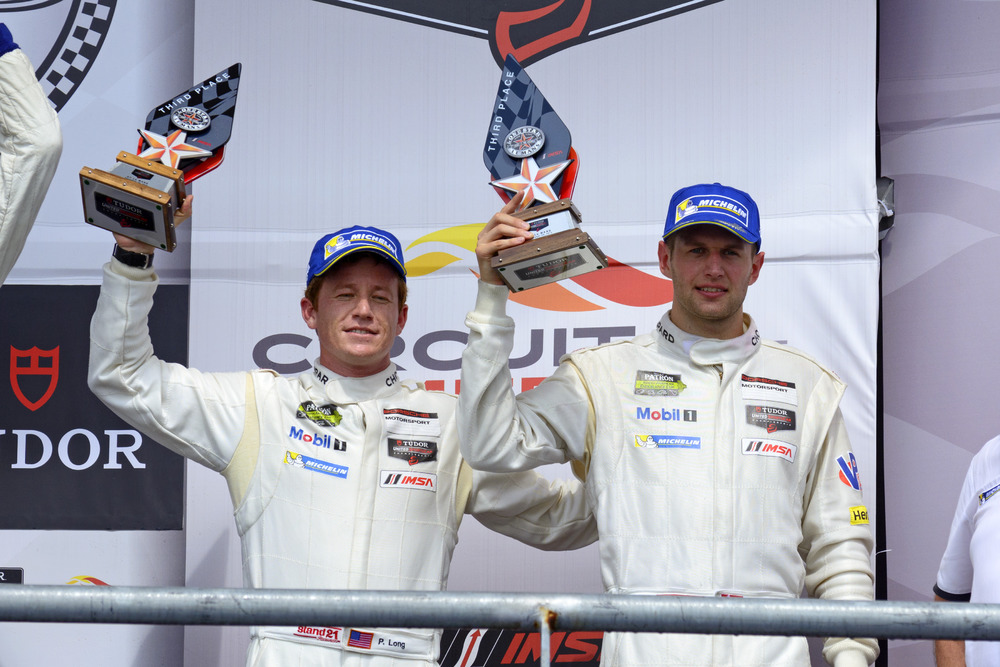 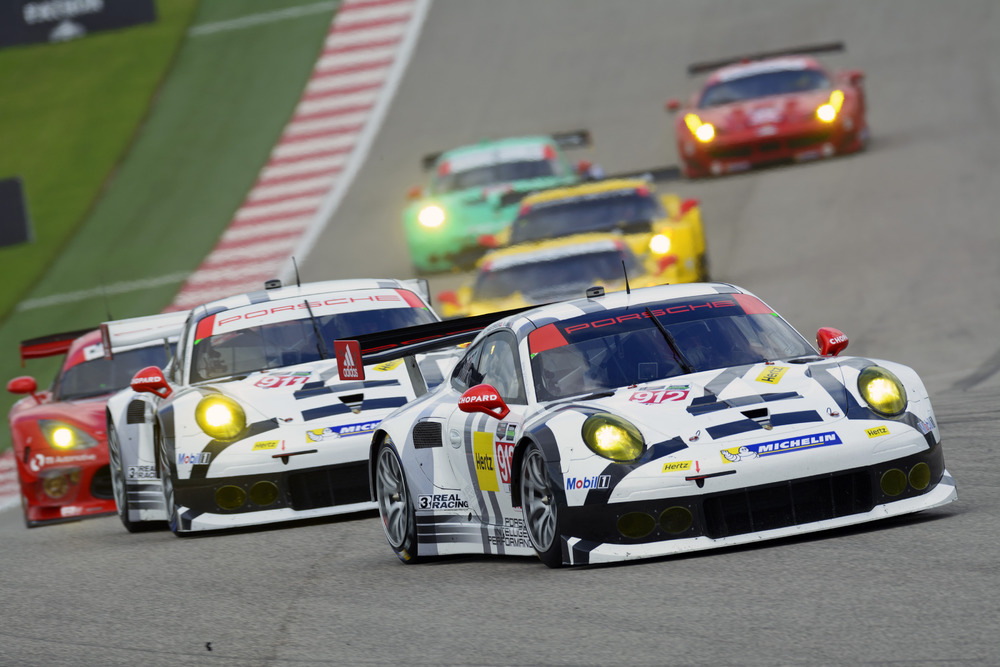 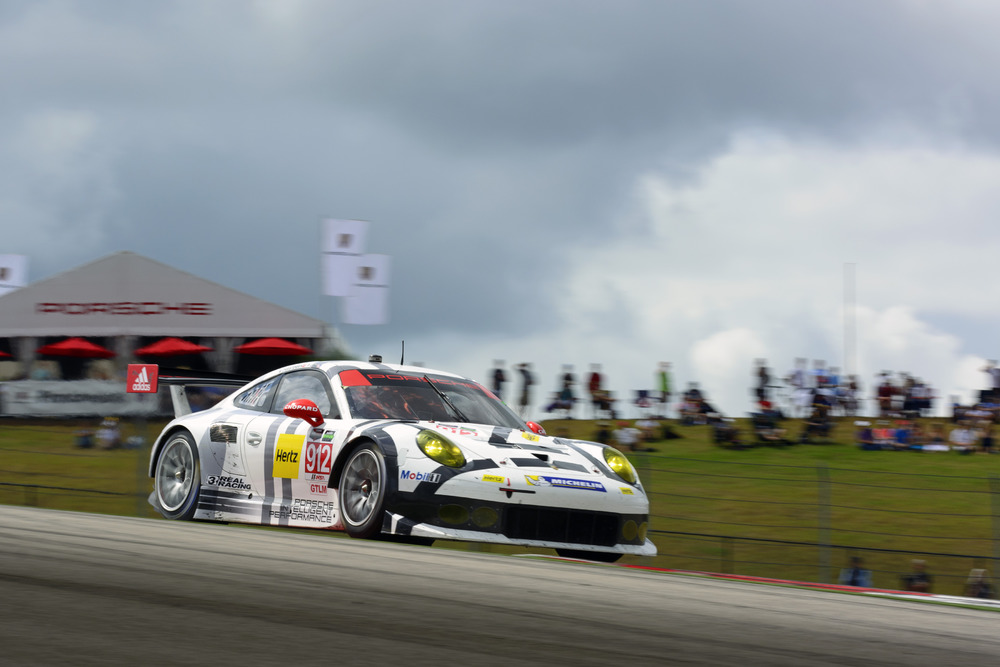 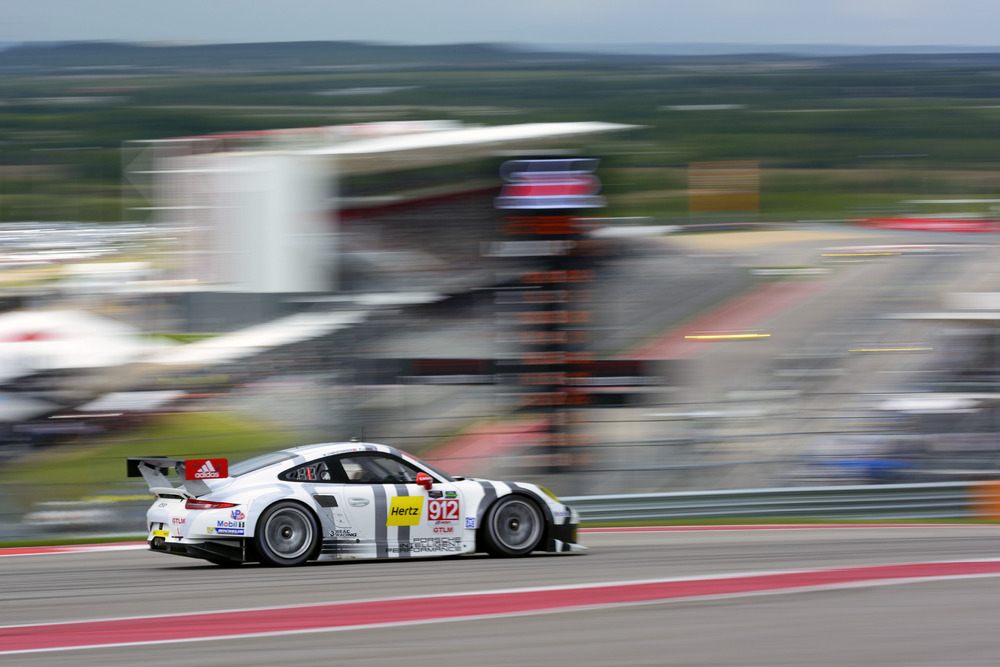 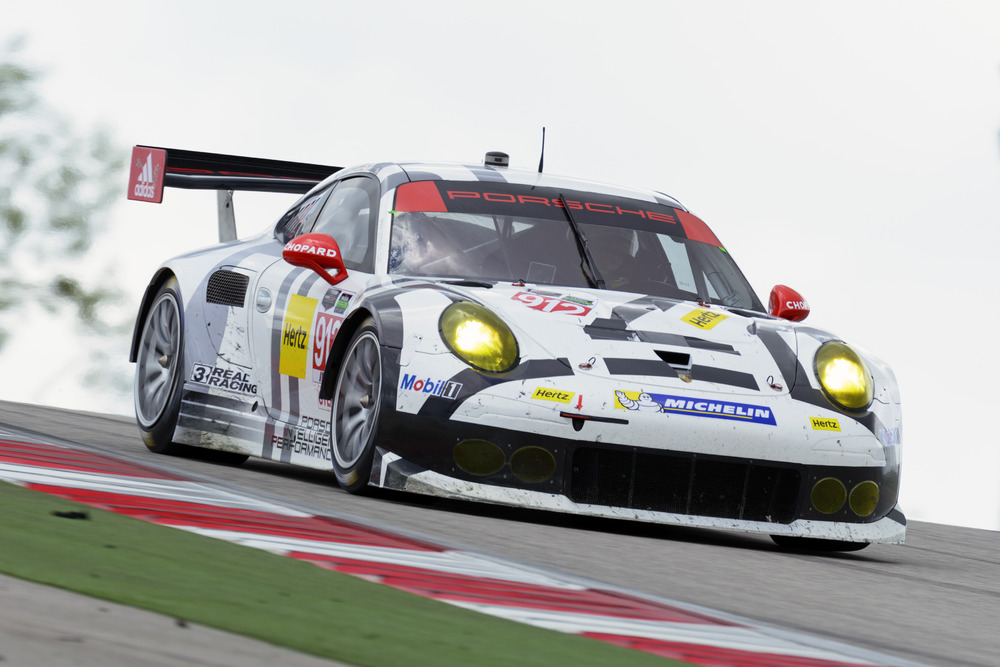 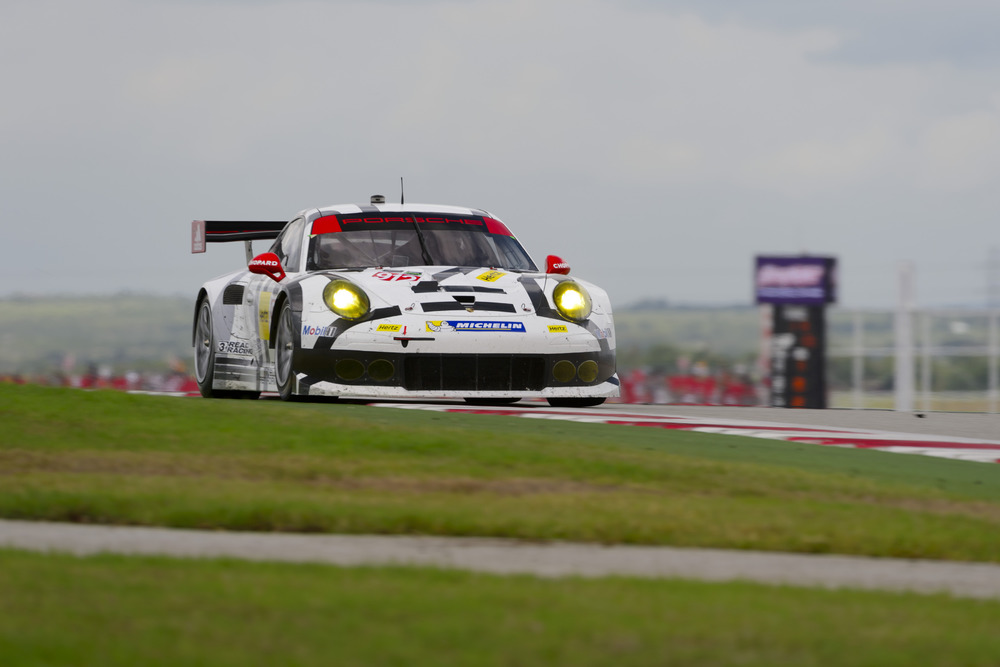 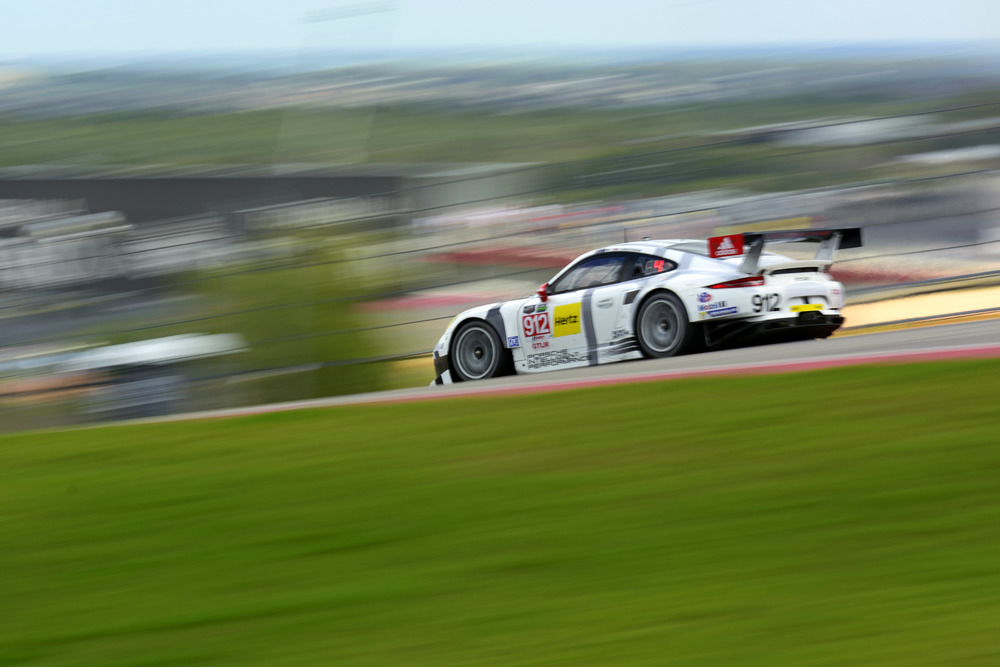 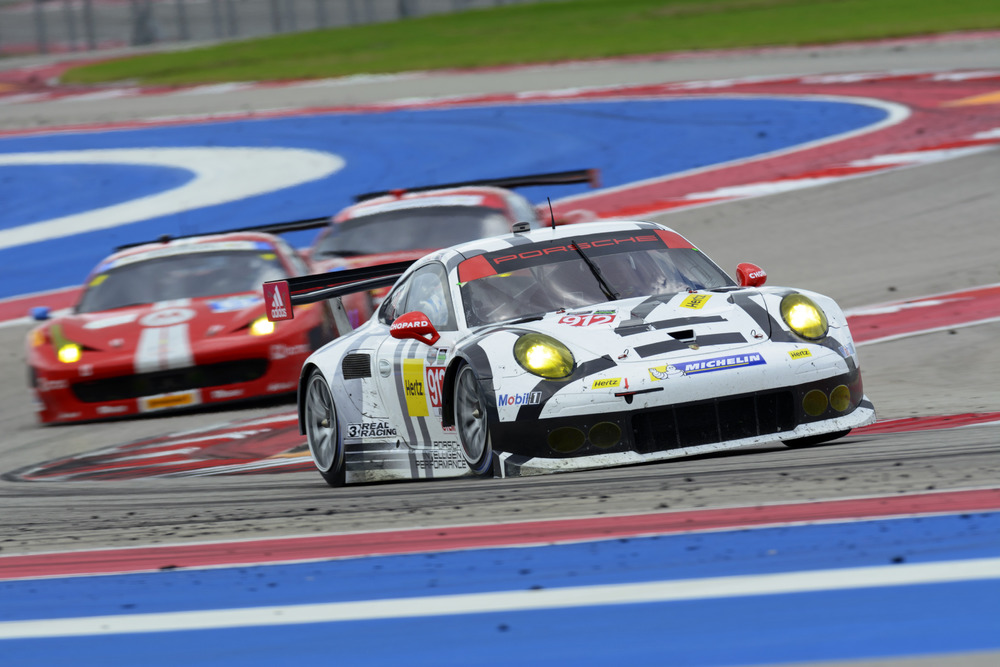 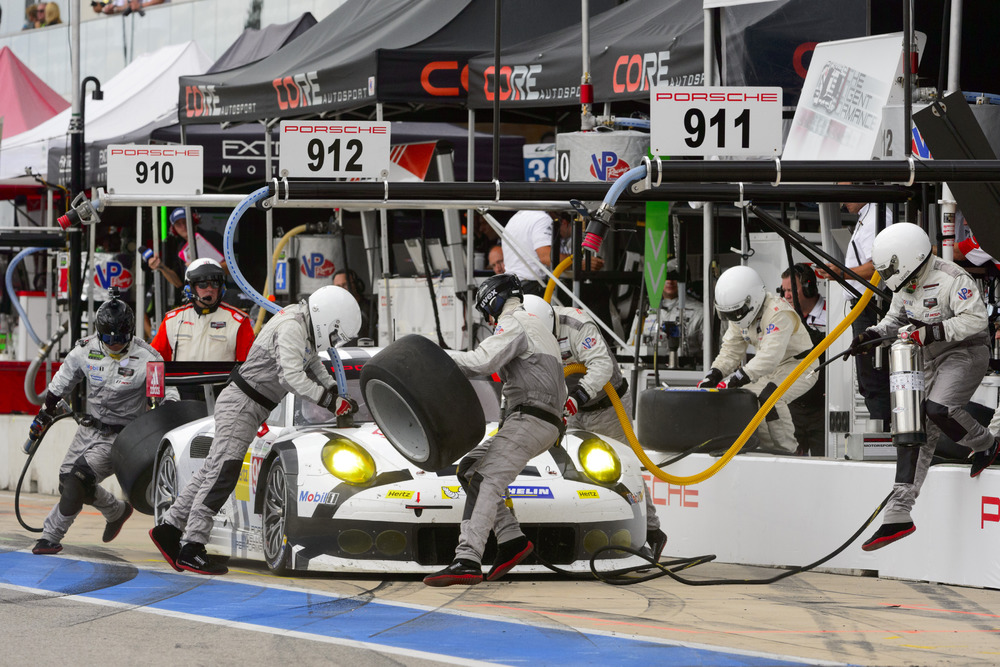 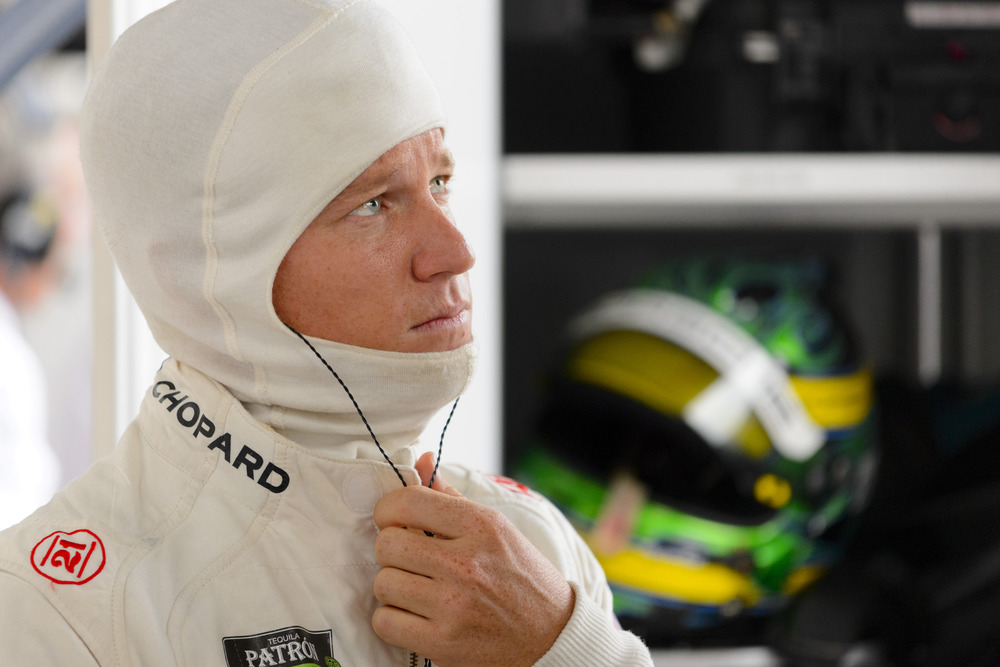 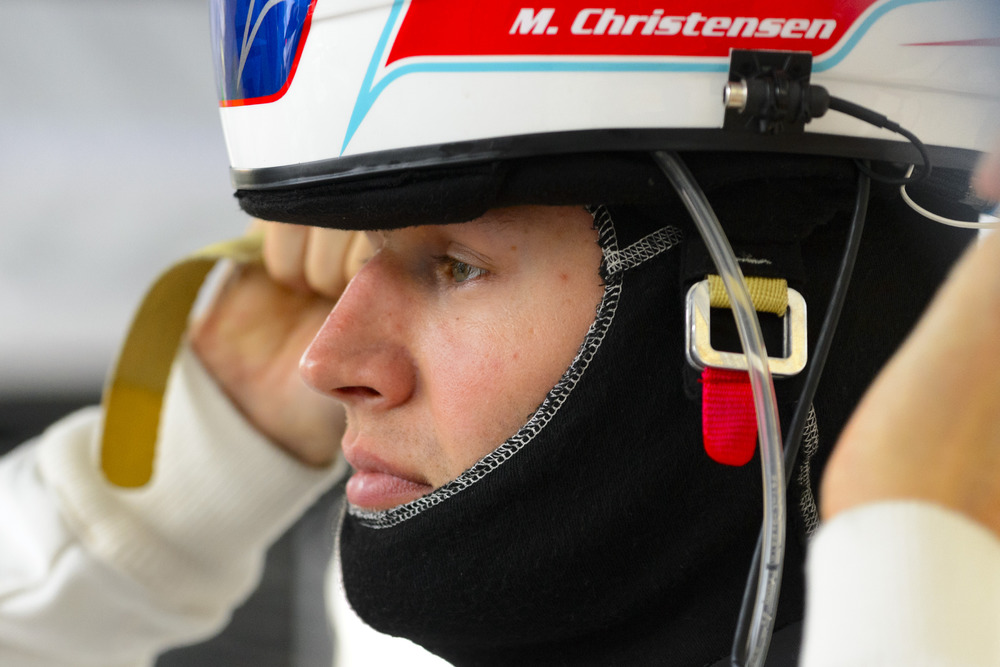 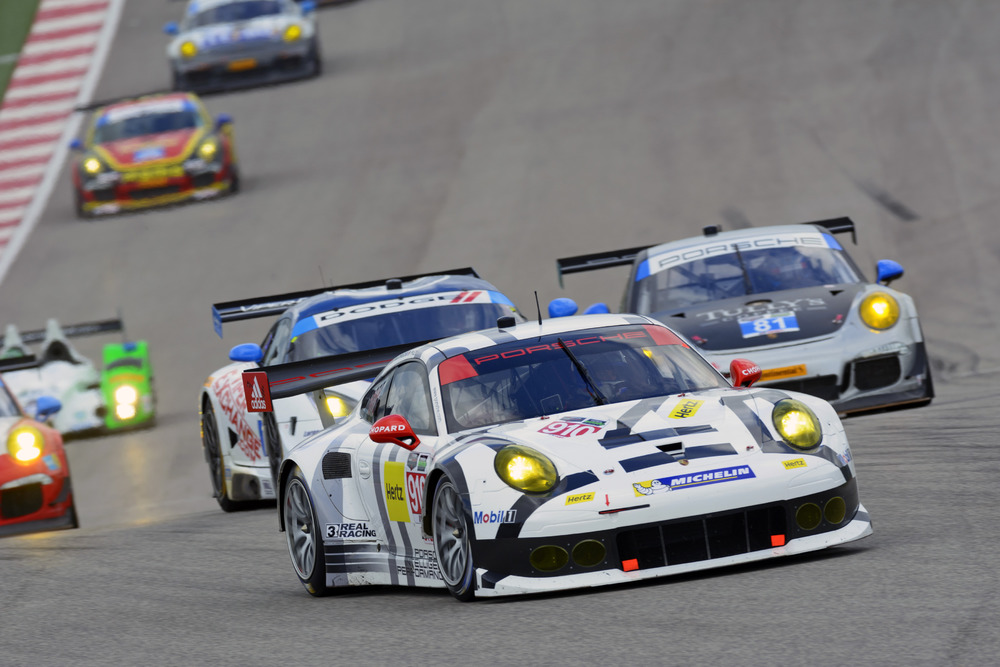 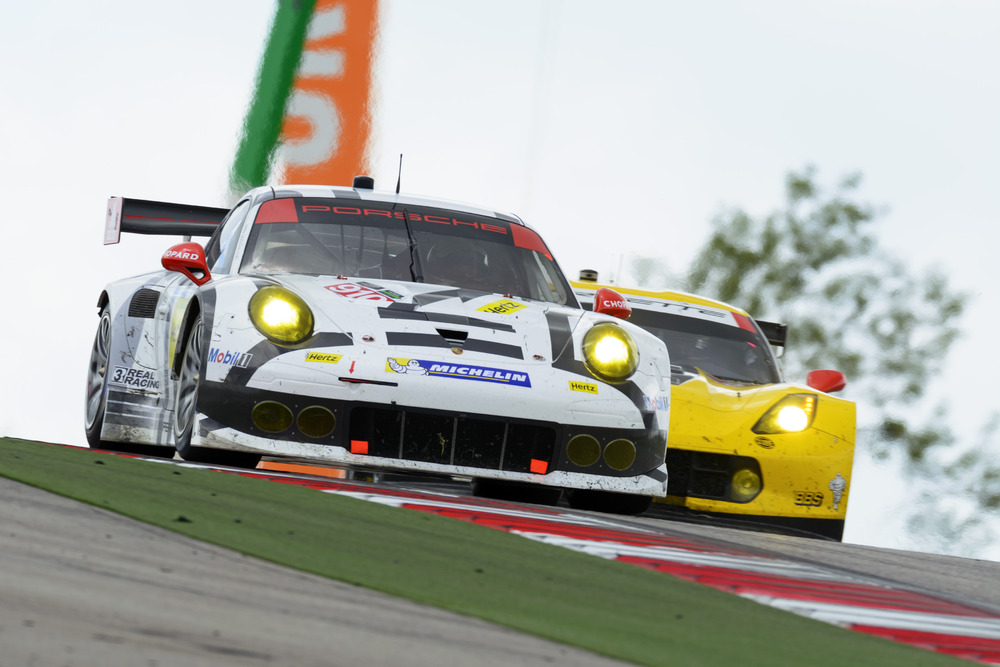 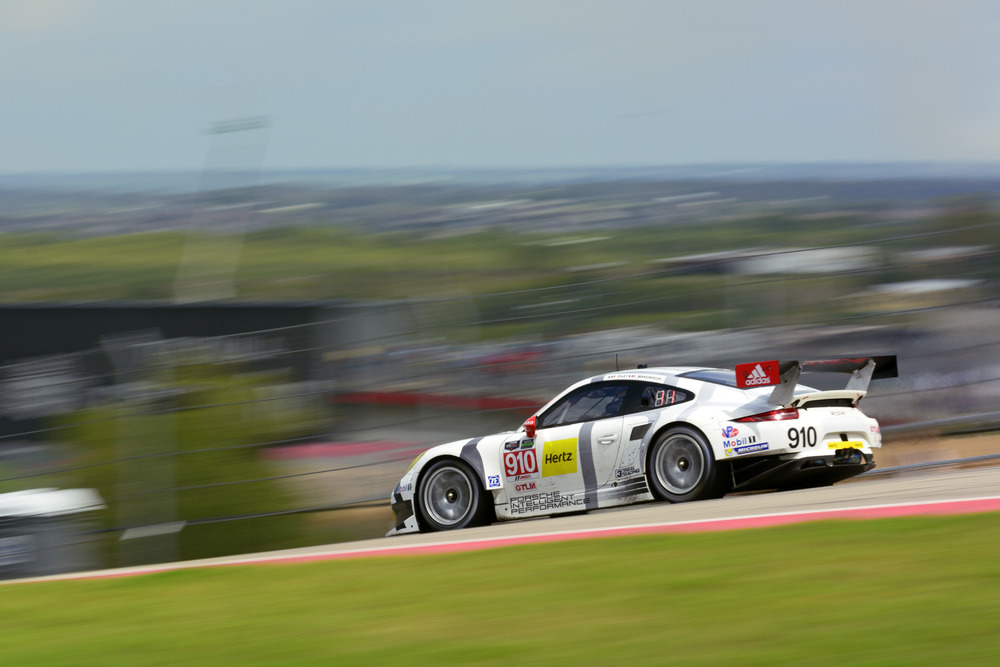 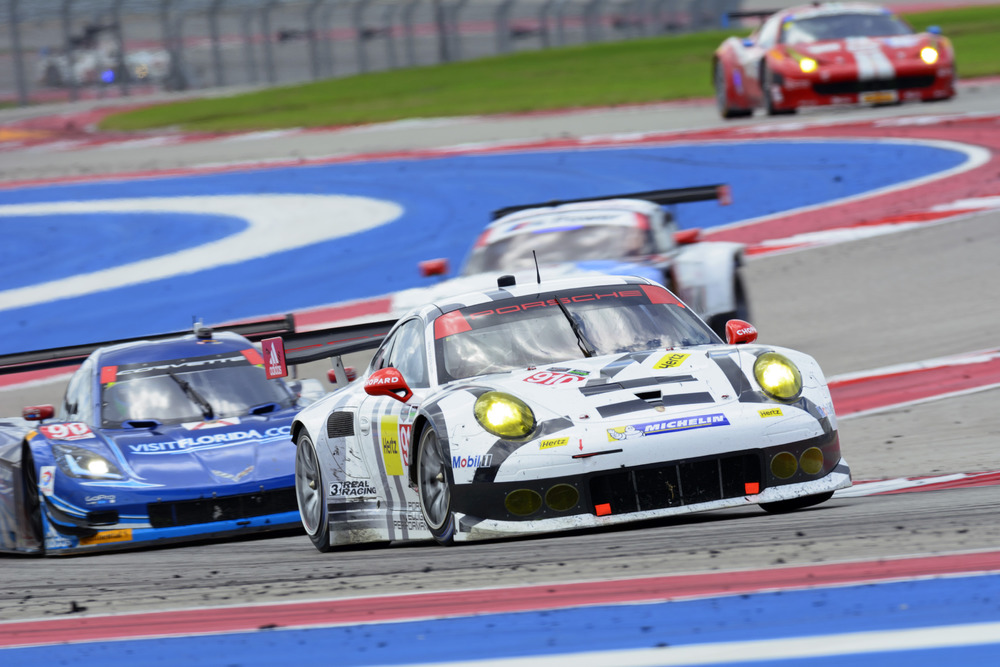 The fight for the GTLM title will go to the final raceTudor United SportsCar Championship, round 10 in Austin, USA

Stuttgart. The fight for manufacturer honors in the GTLM class of the Tudor United SportsCar Championship will go to the final race of the season, the Petit Le Mans at Road Atlanta on October 4. A third place finish by the No. 912 North America 911 RSR on the Circuit of the Americas in Austin helped the German marque retain the point lead in the class for road car-based racecars. won the 1,000-mile Petit Le Mans in 2013 and has won two of the most prestigeous endurance races in North America this year – the Daytona 24 Hours and the Sebring 12 Hours.

The No. 912 North America 911 RSR led the way for the three factory-entered cars based on the iconic rear-engine sports car. Starting in third-position, Michael Christensen drove the first one-hour and 45-minutes of the race. The Dane turned the wheel over to Patrick Long (USA) for the final hour. He fought through the hot and humid conditions of the Austin, Texas summer to finish third following the tandem of Dodge Viper SRT across the finish line.

The podium finish allowed to remain in contention with the lead now split with Dodge entering the Petit Le Mans.

Finishing fifth was the No. 910 shared by Frenchmen Frédéric Makowiecki and Patrick Pilet. The lead 911 RSR, entered for the final two rounds, had possibly the most dramatic race of the day in the GTLM class. Having had their fastest qualifying lap disallowed at technical inspection for missing a roof camera pod, Makowiecki started last in the GTLM class. He did much with his series’ debut charging past nearly half the multi-class field in the first stint of the race. A “drive through” penalty for making contact with another car at mid-race would slow the 911 RSR’s fight to the front. However, a mistake-free effort in the second-half of the race would give North America two cars in the top-five.

The No. 911 North America 911 RSR of Nick Tandy (Great Britain) and Jörg Bergmeister (Germany) looked like the most likely class winner for the day. However, having led for 39 laps, the Daytona winner was retired with 20-minutes remaining in the race having lost drive.

Patrick Long (#912): “We had a very clean pit stop and I put my head down and tried to close the gap to the Viper. After the issues for the race leading 911 RSR we took a safe approach to get to the finish. We were able to salvage some good points today.”

Michael Christensen (#912): “We had a good car. Track conditions were changing from the start to the finish of my stint. This made it quite tricky. We did our best to finish on the podium.”

Patrick Pilet (#910): “Fred did a great job at the beginning. He started last and came up to fifth. The car was running very well. We were the quickest on track. When I overtook the BMW in Turn 15, I was surprised by the car in front, a GTD car, and I touched it on the rear. After the stop-and-go I tried to push and come back and we finished fifth. I am sad for the guys because they did a very good job.”

Frédéric Makowiecki (#910): “It is not easy to start from the back. The first two laps I tried to quickly overtake the GTD cars and the back of the GTLM class. The car was really quick. I think we had what we needed to win the race if we did not start from the back.”

Nick Tandy (#911): “We pitted at the first opportunity and it couldn’t have worked out any better. The yellow came out before anyone else could pit. That gave us an edge and we were able to keep the lead. In the last 20-minutes, I was coming out of Turn 14 and lost drive. I was able to make it into pit lane and we confirmed our day was done.”

As a result of the second-place finish in GTD class, the Magnus Racing 911 GT America of drivers John Potter (USA) and Andy Lally (USA) is still in the GTD point chase. The Team Seattle Alex Job Racing driven by Mario Farnbacher (Germany) and Ian James (USA) held the lead in class during the middle of the race, but fell out of contention when a mechanical problem caused the car to hit the barrier.

The next Tudor United SportsCar Championship race will be the Petit Le Mans on the Road Atlanta circuit on October 4 in Braselton, Georgia, USA.