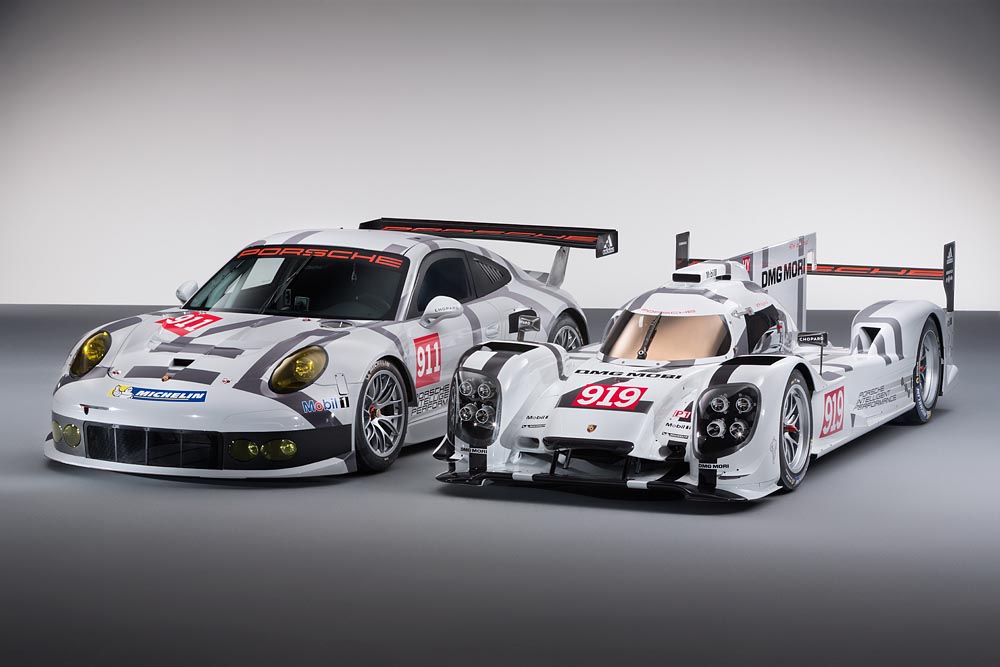 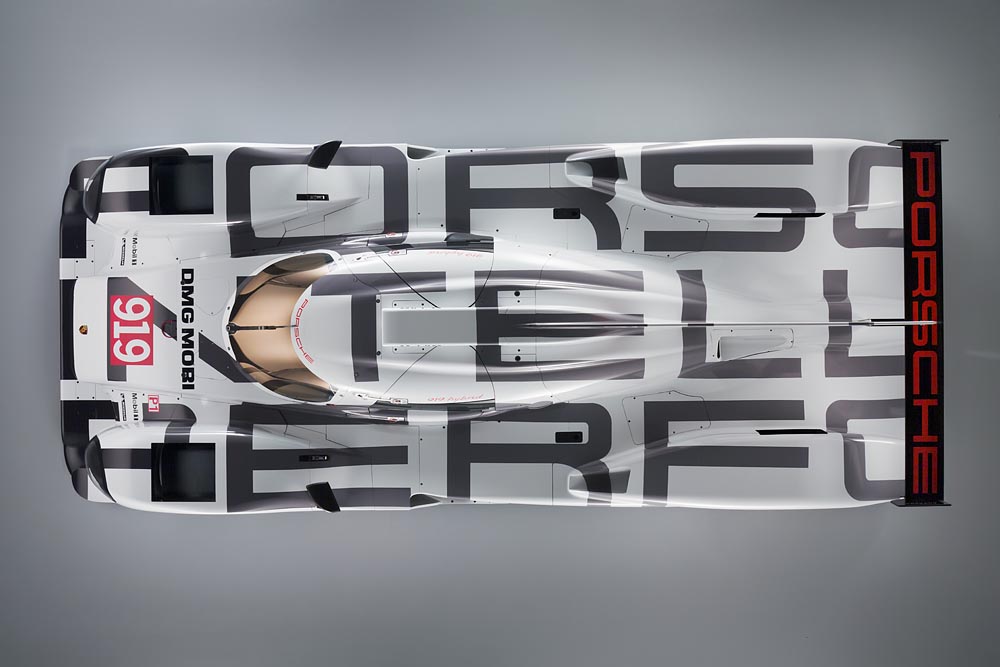 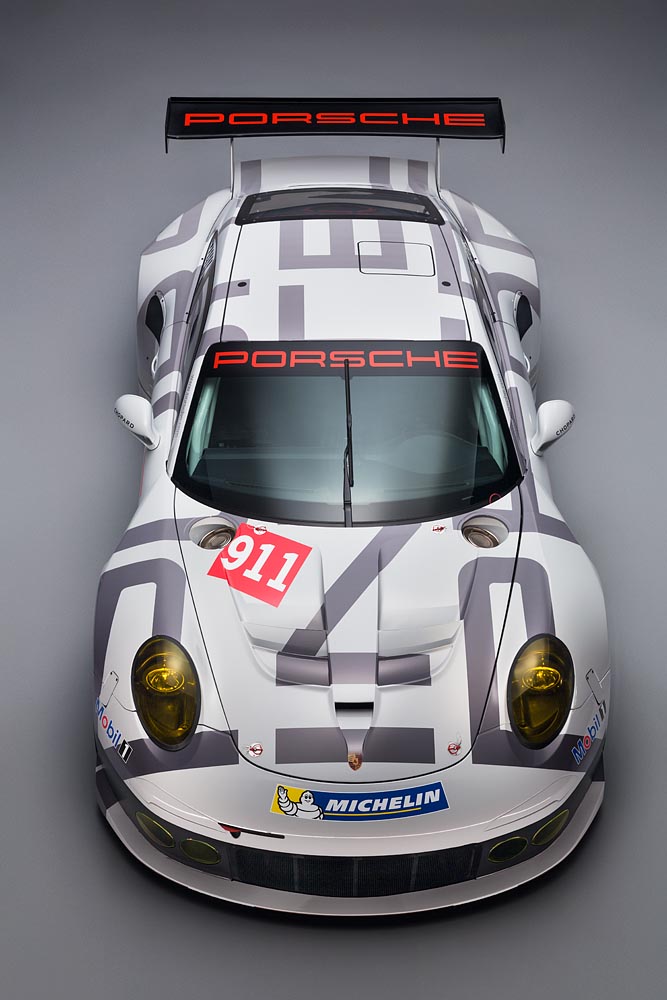 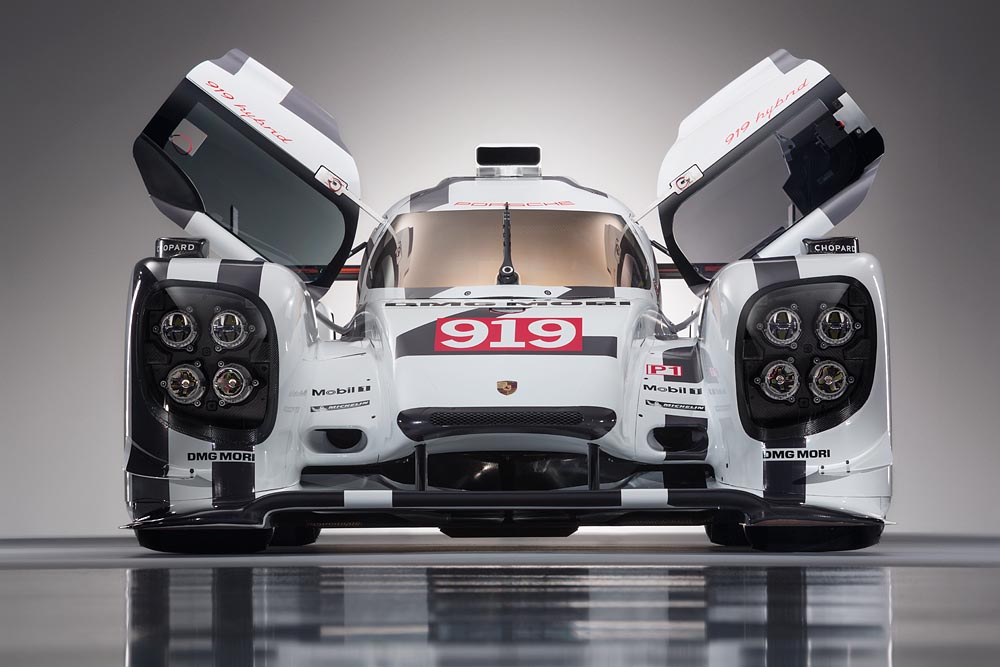 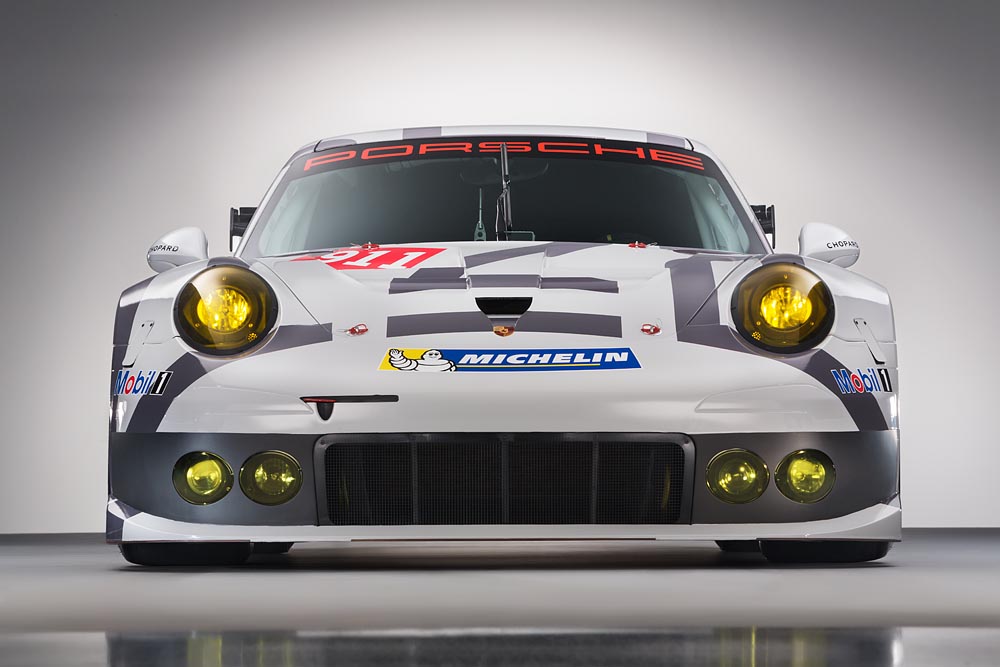 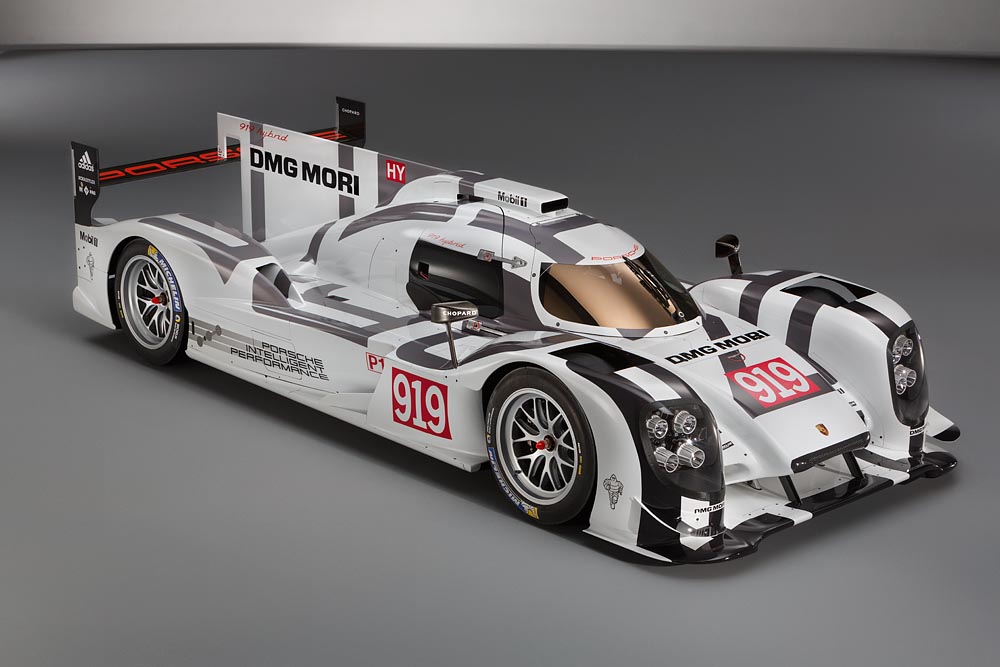 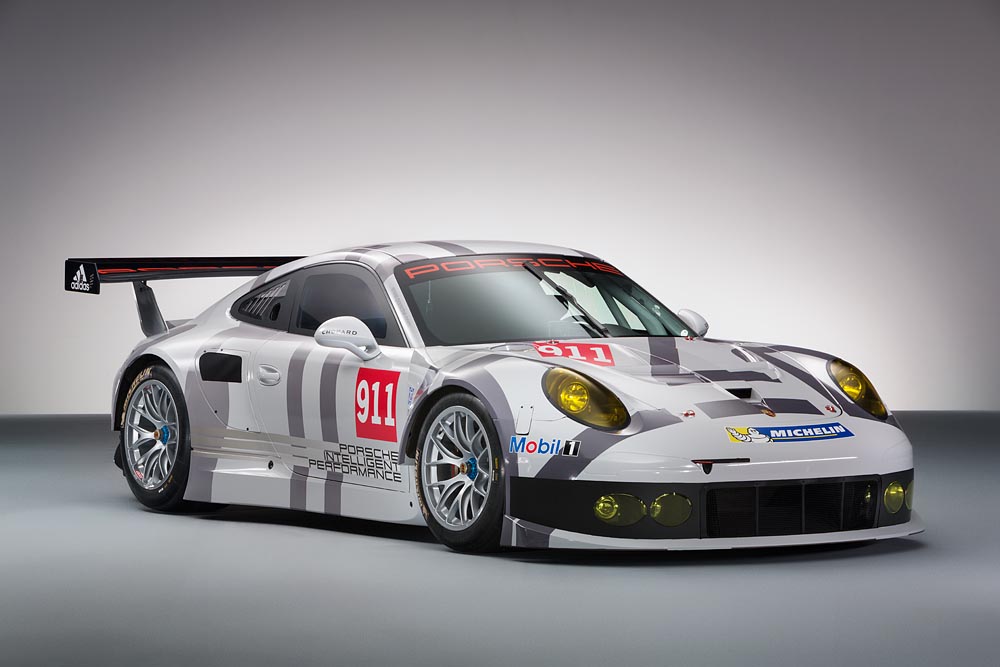 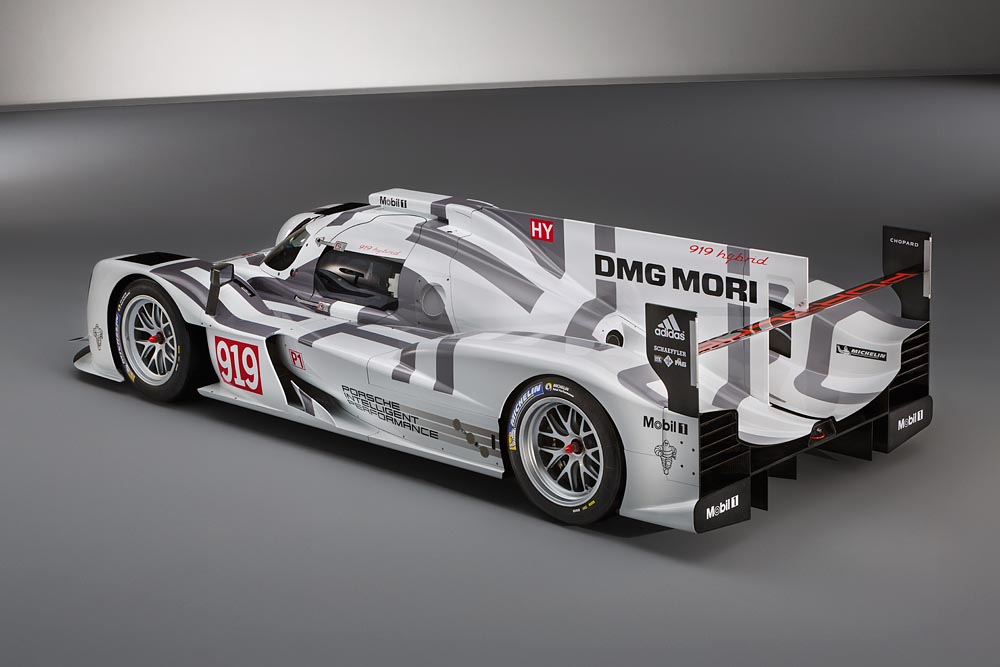 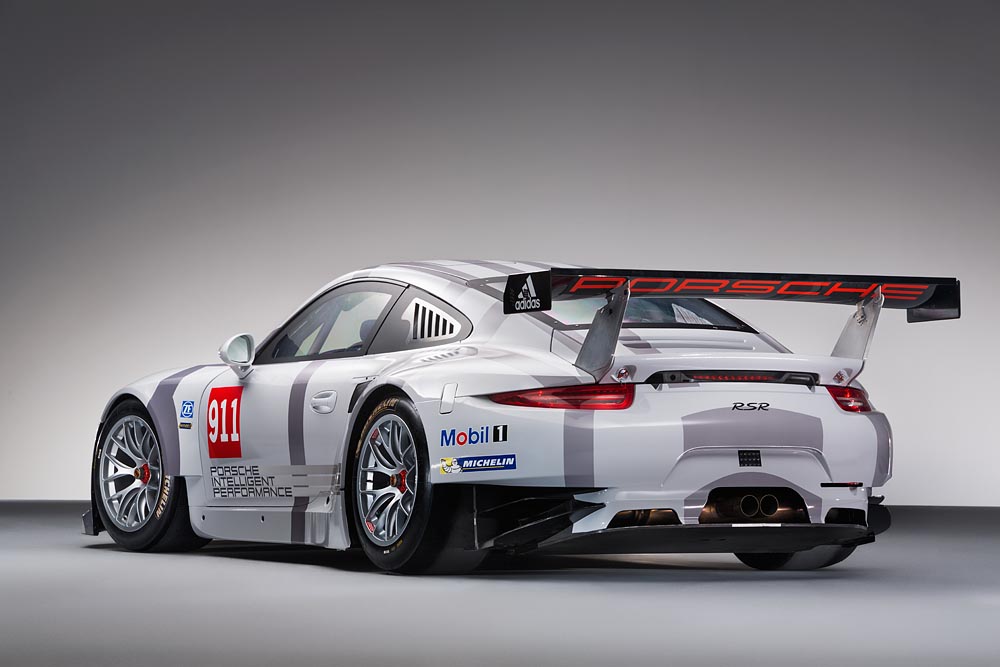 Sports car world championships in focus: 919 Hybrid and 911 RSR World premiere of the S Diesel, European debut of the 911 at the Geneva International Motor Show

Stuttgart . At the Geneva International Motor Show, the new 919 Hybrid is celebrating its world premiere for the top category of the 2014 World Endurance Championships (WEC). The innovative hybrid prototype will be joined by the 911 RSR at the exhibition area in Geneva as well as at all eight races of the WEC series, whose season highlight will certainly be the 24 hours of Le Mans. will also be showing the S Diesel1) to the public for the first time in Geneva, and the 911 2) is making its European debut.

919 Hybrid: Cutting-edge technology benefits production cars
Matthias Müller, Chairman of AG: "Crucial in the development of the Le Mans prototype were the newly created and revolutionary racing rules for this class as they relate to energy efficiency. In 2014, it will not be the fastest car that wins the World Endurance Championship series and the 24 hours of Le Mans, rather it will be the car that goes the furthest with a defined amount of energy. And it is precisely this challenge that carmakers must overcome. The 919 Hybrid is our fastest mobile research laboratory and the most complex race car that has ever built."

The exceptional efficiency of the 919 Hybrid is the result of a carefully balanced overall concept. The sum of all of its individual components forms an effective unit: from the combustion engine to the energy recovery systems, chassis and running gear, aerodynamics and driver ergonomics. The combustion engine is a compact V four-cylinder petrol engine that also serves as a load-bearing member in the chassis. It is a frontrunner of the future-oriented downsizing philosophy features two litres of engine displacement, direct fuel injection and mono-turbocharging, the engine that turns at speeds up to 9000 rpm. The compact engine outputs around 500 hp.

In addition, the Le Mans prototype has two energy recovery systems. Fundamentally new here is a system that recovers thermal energy from exhaust gases via an electric generator driven by the exhaust gas stream. The second hybrid system has the functionality familiar from the 918 Spyder. Here, a generator on the front axle utilises braking phases to convert kinetic energy into electric energy. Lithium-ion batteries serve as the energy storage medium. When the driver needs this energy, an electric motor drives the front axle. This makes the 919 Hybrid an all-wheel drive vehicle temporarily.

A new team of over 200 employees was formed to develop and implement the Le Mans prototypes at the development centre in Weissach. Friedrich Enzinger, Head of LMP1: "Within two and one half years we built the infrastructure, assembled our team and put this highly complex race car on wheels. We have the greatest respect for the lead our competitors have in racing experience. Our objective in the first year is simple: to finish races and be competitive."

911 RSR: Race track icon benefits production cars
At , the pursuit of maximum sporty performance with maximum energy efficiency is condensed into the core brand trait "Intelligent Performance" – it is written in bold letters on both the 919 Hybrid and 911 RSR. This prototype is not the only innovative car on the road. The 911 icon, which has successfully been reinvented in the seventh generation of the car, consistently benefits directly from motorsport developments. The rear-wheel drive 911 RSR, for example, exhibits intelligent lightweight design and refined aerodynamics. These two traits not only result in better lap times but also better fuel efficiency.

The 911 RSR, which outputs 470 hp, was first introduced in 2013. Last year, this car finished first and second in its class at the 24 hours of Le Mans, and in January 2014 celebrated a class victory at the American 24-hour classic in Daytona. The second factory team, Team Manthey, will compete with two 911 RSR race cars in the World Endurance Championship series which begins in April. Drivers Jörg Bergmeister (Germany), Marco Holzer (Germany), Frédéric Makowiecki (France) and Patrick Pilet (France) will compete in seven world championship events with each race lasting six hours. Richard Lietz (Austria) and Nick Tandy (Great Britain) will join them for the marathon in Le Mans.

Hartmut Kristen, Head of Motorsports, and responsible for GT Motorsport and all customer sport programmes, explains: is kicking off 2014 with the most extensive motorsport programme in the company's history: We have a total of 20 factory drivers now. Along with the factory teams in the WEC, there are two more factory 911 race cars that are being used by the Cars North America team in the new Tudor United Sports Car Championship series.” Kristen adds: "We have also put the RSR in the hands of customer teams for the first time."

The most prominent international customer is without a doubt the US actor Patrick Dempsey of Team Dempsey Racing Proton. He will be at the starting line in Le Mans for the third time this year.

Motorsport on Twitter: News that is fast and compact
@Races is the new Twitter channel of Motorsport. Before the racing season, this brief messaging service informs you about upcoming Motorsport events by Motorsport, and during races it reports live from the box about driver changes, weather conditions, tyre selections and background information.

S Diesel: Top performer in savings and sprints:
Another is celebrating its world premiere in Geneva as a masterful example of intelligent performance: the S Diesel. Its 258 hp (190 kW) three-litre turbocharged engine makes it a fuel-efficient version of the sportiest compact SUV. Zero to 100 km/h in 6.1 seconds and 6.1 litres of diesel per 100 km – these are the figures that define driving in the S Diesel. They also make it a genuine long-distance sport vehicle.

911 : Innovative new edition of a classic
The new 911 is now appearing for the first time in a European show after its world premiere in Detroit in January. Like the classic car of 1965, the new model has a distinctive bar in place of B pillars, a moving roof section over the front seats and a wrap-around rear windscreen without C pillars. However, unlike the original , the roof segment opens and closes in a spectacular sequence at the push of a button. That too is intelligent performance.