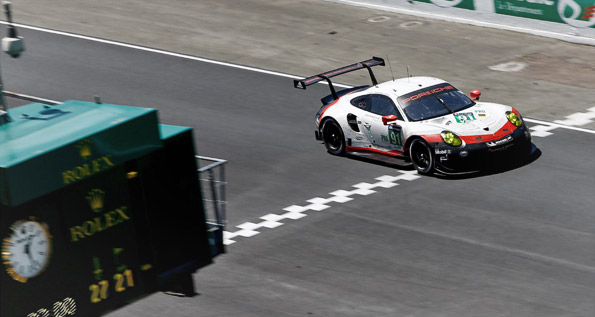 Stuttgart. With an admirable debut at the Le Mans 24 Hours witnessed by 258,000 fans, the new 911 RSR demonstrated its potential and reliability. At the 85th running of the French long-distance classic, the 510 hp race car, which was designed by Motorsport in Weissach based on the seventh generation of the iconic 911 sports car, led the field over long distances and was on course for a podium result until shortly before the flag. However, after 340 laps full of thrills and drama on the legendary 13.629-kilometre Circuit des 24 Heures, Richard Lietz (Austria) and his French teammates Frédéric Makowiecki and Patrick Pilet had to settle for fourth place in the fiercely cutthroat GTE-Pro class. An additional pit stop due to tyre damage an hour before the finish robbed them of all hopes in achieving a podium spot at the toughest automobile race in the world.

In glorious summer weather and temperatures of around 30 degrees Celsius, 60 vehicles were sent on their way at 15.00 hours on Saturday in the 24-hour chase in the department of Sarthe in western France. The two new 911 RSR, which were fielded for the first time at Le Mans by the GT Team, completed the first third of the race with any major problems. The only incident on the Circuit des 24 Heures, which throws very special challenges at drivers with its combination of a permanent racetrack and normal national roads, was when the #92 911 RSR became entangled in a collision. In the ultra-fast corner 1, it was hit by a competitor and had to return to the pits. Prior to this, Michael Christensen (Denmark), Kévin Estre (France) and Dirk Werner (Germany) had at times been running in second place. Thanks to a perfect race strategy and fast pit stops, the time that was lost was virtually recovered. Their charge, however, was finally halted during the night: After 179 laps and the occasional stint in the lead, Michael Christensen (Denmark) lost control of his 911 RSR while kerb-hopping in the Ford chicane and crashed into the barriers with the rear of his car.

In the second half of the race, however, their teammates in the #91 911 RSR took up the leadership role. On Sunday morning, Patrick Pilet moved into the top position of the very strong GT field for the first time, with Richard Lietz and Frédéric Makowiecki also turning laps at the lead over long distances. In the final stages of the race, all signs looked promising for at least a podium result. With one-and-a-half hours to go before the flag, Frédéric Makowiecki was running in third place. And this is how the race might have ended had a puncture one hour before the end not forced the vehicle back into the pits for an unscheduled pit stop. The fight for the podium was lost.

In the GTE-Am class, customer teams fielded four 2015-spec 911 RSR. The best result was secured by the 911 campaigned by Dempsey Proton Racing in sixth. Sharing the cockpit of the #77 car was Young Professional Matteo Cairoli (Italy) with the German racing drivers Christian Ried and Marvin Dienst.

Round four of the Sports Car World Endurance Championship WEC will be contested on 16 July at the Nürburgring/Deutschland.

Dr. Frank-Steffen Walliser, Vice President Motorsport and GT Cars: “This was our first time at Le Mans with our new 911 RSR and I think we delivered a good performance. It’s a shame that we lost our #92 car in the night due to an accident. It’s also a pity that our #91 vehicle only managed fourth place at the end, although the drivers and team had done everything and the vehicle had even led over long distances. But then tyre damage hit and on top of that we were a little unlucky with a slow zone. That cost us the chance of a better placing, but we’ll be back next year.”

Drivers 911 RSR #91
Richard Lietz: “It’s tough when you give your best and to stand there empty-handed in the end. Our 911 RSR performed well in the corners as expected, but in the high temperatures we lost time to our rivals on the straights. The whole team deserves a huge thank you, because the preparation for Le Mans was extremely hard. Our mechanics really did everything they could. It was an exciting race and I hope we’ll be able to compete for a podium spot next year. Fourth place this year is okay, it gives us important points towards the championship and things are looking good for us in this respect.”
Patrick Pilet: “It was a hard, difficult race. We all did our very best and we can’t blame ourselves. From our side it was a perfect race. The drivers didn’t make any mistakes out on the racetrack and the team gave us tremendous support. Our 911 RSR ran well on this demanding circuit. Over the entire race we only came in to the pits to refuel and change the tyres. A podium spot would have been a great result for the team, but it wasn’t to be. We’ll return next year even stronger.”
Frédéric Makowiecki: “It was a good race. The whole team worked brilliantly. We tried literally everything to reach the podium. Unfortunately it wasn’t quite enough. Still, the Le Mans 24-hour race was once again an unforgettable experience.”

Drivers 911 RSR #92
Michael Christensen: “That was an unbelievably tough race. We were driving at the limit the entire time and you had to take big risks to keep up with the opposition. In the chicane I risked a little too much. It’s a shame because our 911 RSR was running well and we were up with the frontrunners. I’m sorry for the whole team who gave us such great support.”
Kévin Estre: “Le Mans is the world’s toughest automobile race. We saw it again this year. It always hurts when you don’t reach the finish line. But at Le Mans it’s particularly painful.”
Dirk Werner: “We really picked up the pace over the course of the race. At times we were even in the lead. It’s a shame we didn’t make it to the flag. But as a racing driver you simply have to accept retirements. However, we’ll work hard so that we can come back next year even stronger.”

Customer team drivers
Patrick Long (911 RSR #93, Proton Competition): “The handling of the 911 RSR was very good over the entire race. The only place we couldn’t match the pace of our opponents was on the straights. We put pressure on right to the end and the team gave their utmost. We can be proud of our effort. We’ve all enjoyed the unique atmosphere of this race.”
Matteo Cairoli (911 RSR #77, Dempsey Proton Racing): “I was determined to finish on the podium at my first Le Mans attempt. In the beginning everything was going well for us, but in the night we had a technical problem that threw us back. Still, we were able to finish the race and earn important points towards the championship. And I fulfilled my dream to race at Le Mans. I hope we come back in 2018.”

Complete results from all WEC races on http://fiawec.alkamelsystems.com
Current points standings on http://www.fiawec.com/en/season/result/4116