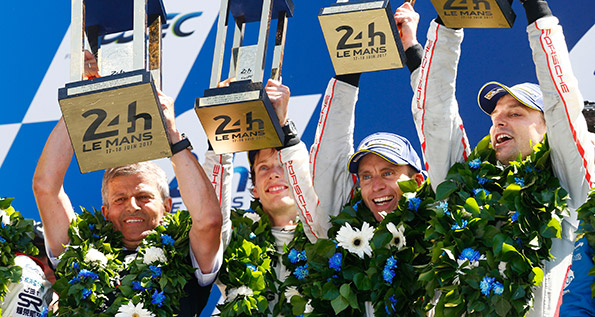 With great team spirit and an almost superhuman effort, won the 2017 Le Mans 24-hour race. Earl Bamber (NZ), Timo Bernhard (DE) and Brendon Hartley (NZ) caught up brilliantly and secured the 19th overall win for on June 18. A comparable effort dates back exactly 40 years ago, when Jacky Ickx (BE), Jürgen Barth (DE) and Hurley Haywood (USA) came back in their 936 from position 42 to win the race.

Oliver Blume, Chairman of the Board, Dr. Ing. h.c. AG: “What a dramatic race! A fight back from P54 to P1 – who could have ever believed that this was possible? The Le Mans myth is alive, exactly because of such unbelievable stories like we experienced last weekend.”

The 85th running of the world’s biggest and toughest car race started with a one-two lead for Toyota and an unfortunate setback for the car number 2 919 Hybrid, the car that ultimately won the race. At 6:30pm, the 919 of Bamber, Bernhard and Hartley was forced to make an unscheduled pit stop. It took one hour and five minutes to change the electric engine that drives the front axle. The car re-joined the race at 7:35pm placed 54th, 19 laps down on the race leader.

During the night, the strong competition from Japan had to accept losses. The number 8 Toyota pitted for lengthy repairs while the number 7 stopped on track because of a clutch failure and number 9 did the same after an accident in traffic. At 00:45am, the car number 1 919 Hybrid took the lead. again paid the price of a race staged in high ambient temperatures at 11:09am: engine failure on the leading car. After a strong performance in P1, lasting for more than ten hours, the dreams of Neel Jani (CH), André Lotterer (DE) and Nick Tandy (GB) came to a sudden end.

Now the time for the hunters had arrived. The number 2 919 Hybrid was the best placed LMP1 in the race and sliced through the LMP2 field. At 12:50pm on lap 330, Bernhard was back on the same lap as the race leader. By lap 347, he had closed him down to take the chequered flag 20 laps later as the overall winner.

The race in numbers:

• The most led laps of the race were completed by the number 1 sister of Neel Jani (CH), André Lotterer (DE) and Nick Tandy (GB). It led the field from lap 155 until and including lap 318 (00:45am until 11:09am). Additionally, it led two more laps from earlier in the race due to pit stop periods. In total the number 1 car led for 166 laps.

• At the time of the car number 1’s engine failure, it led by a 13 lap margin over the rest of the field.

• During the 24 hours, the race saw three safety car periods (15 laps) and 27 ‘slow zones’ during which the drivers had to reduce speed to 80 km/h.

• The winning car entered the pit lane a total of 29 times, once for a drive-through penalty. Including the long stop for repairs, it spent one hour 38 minutes and 5.211 seconds in the pits.

• The race winners used ten sets of slick tyres and the car was refuelled 28 times.

• Only one lap shorter than this was Bernhard’s final run from lap 325 until the finish after lap 367.

• Bernhard clearly drove the biggest share of the distance. He did 159 laps in total, Hartley was in the car for 106 laps and Bamber for 102.

• Before the race, Bernhard’s weight – including overalls and helmet – was 65.0 kilograms. After the race he tipped the scales at 63.8 kilograms.

• The fastest full service pit stop, including a tyre and driver change, by the Team was 82.343 seconds.

• The drivers had 0.9 litres of drink on board for each stint. The drink bottle was changed at every refuelling stop.

• 11 tear-offs in total were removed from the winning car’s windscreen for the best possible visibility.

• 25.2 gigabytes of data from car number 2 was transmitted to the pits during the 24 hours.

• After three out of nine rounds of the FIA World Endurance Championship, with double points in Le Mans, now leads the manufacturers’ standings with 111 points ahead of Toyota (74.5 points). In the drivers’ world championship, Bamber/Bernhard/Hartley have scored 83 points and are leading by a 21 point margin. Jani/Lotterer/Tandy are currently in 5th position with 28 points.

Also 40 years ago, managed what seemed impossible at Le Mans. This is how the six times overall winner Jacky Ickx (BE, 72) remembers it: “After three hours, we thought we’d lost the race. My 936 was out, and I joined up with Jürgen Barth and Hurley Haywood. But they were having trouble as well. We were in 42nd place. I still can’t get my head around what happened next. It was this euphoric state. I drove the whole night at top speed, always on the limit. In rain and fog. I just got faster and faster. 42nd, 35th, 28th, 20th, ninth, sixth, fifth. Everyone felt that we could achieve the unimaginable. Jürgen and Hurley drove faster than ever, and the mechanics did an incredible job. I didn’t feel tired at all. Then we took the lead. On Sunday morning I was totally spent. In the end, Jürgen hauled the 936 across the line with only five cylinders. I wouldn’t have been able to. There are a lot of great stories about a lot of races. But 1977 stands out. That was a once-in-a-lifetime thing. Races like that have made a legend.”