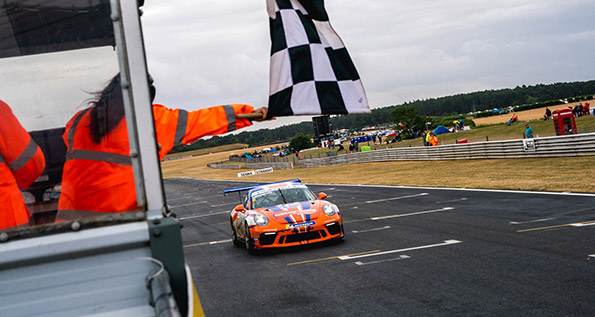 Dino Zamparelli (Redline Racing) reclaimed the championship lead of the Cup GB, the fastest single marque GT racing championship in the UK, following rounds nine and ten at Snetterton. A victory in round nine and a podium finish in round ten mean that Zamparelli has snatched the championship points advantage back from title rival Tio Ellinas (Slidesports Engineering). Tom Wrigley (JTR) took advantage of his reverse grid pole position in round ten to take a lights-to-flag victory, resisting pressure from Lewis Plato (JTR) and Zamparelli to record his second win of the 2018 season.

The three-mile long Snetterton circuit created a greater distinction between the three categories than usual, each category produced close racing and enthralling championship battles. Jamie Orton (JTR) took two Pro-Am category victories, but in both races he had to push hard to fend off the advances of Seb Perez (Amigos Team Parker) and Dan Vaughan (Motorbase Performance) – Rookie Perez in particular mounted serious challenges in both races. As a result of his double victory Orton retains his Pro-Am championship lead.

Am category drivers Peter Mangion (Team Parker Racing) and Peter Kyle-Henney (IN2 Racing) renewed their close championship fight at Snetterton. Though there was nothing to choose between the two throughout the weekend, Mangion recorded two wins with Kyle-Henney finishing directly behind him twice – the result means that there are now just three points between the pair in the Am championship. Also worthy of note was newcomer Dan Kirby (GT Marques), he impressed in his first weekend of Cup GB racing with two Am category podium finishes.


Race one
Round nine of the championship saw Tio Ellinas (Slidesports Engineering) start from pole position with title rival Dino Zamparelli (Redline Racing) alongside him on the front row. The entire Pro category grid was covered by just half a second in qualifying with equally close lap times separating the Pro-Am and Am runners, this set the scene for what promised to be an exciting race. Damp conditions added a further level of tension to proceedings prior to the start, resulting in all 23 cars arriving on the grid for the 14 lap race on grooved wet weather tyres.

In the slippery conditions Plato was soon overtaken by Harper and Ellinas. Having worked his way up from seventh on the grid to second position, overtaking Harper and Plato in the process, Frenchman Hasse-Clot slid off the circuit and into the barriers where his race ended. That left the order at the front: Zamparelli, Harper and Ellinas. In the Pro-Am category changes of position saw Orton leading Perez with Vaughan in P3. A close Am category battle also developed with a series of position changes; Kirby spun from the lead, Kyle-Henney and Mangion switched positions, with David Fairbrother (Slidesports Engineering) passing Iain Dockerill (Asset Advantage Racing) after the latter spun. On lap five Mangion found a way by Kyle-Henney for the lead in Am.

At the front of the race Harper began closing on Zamparelli while Plato repassed Ellinas for P3. In Pro-Am Perez overtook Orton for the category lead in one of the closest battles of the race. In Am Fairbrother, Gary Eastwood (G-Cat Racing), and Richard Hawken (Slidesports Engineering) were locked in a tight fight for the final category podium position, however Eastwood and Hawken soon collided allowing Kirby to advance to P3 in the category.

With the majority of the race distance completed, Zamparelli began to pull away from Harper on a drying track, behind them came Plato, Ellinas, Tom Wrigley (JTR) and George Gamble (Amigos Team Parker) in close formation. At the chequered flag Zamparelli led JTR team mates Harper and Plato over the finish line. In the Pro-Am category, Orton closed on Perez during the final stages of the race for the category lead, making a successful challenge on the final lap to take the category lead – this making the final order; Orton, Perez and Vaughan. Though Kyle-Henney homed-in on Mangion he could not find a way past his Am championship rival, Vaughan followed the pair to the finish line to secure the final category podium place.

Following a post race investigation Plato was found to have overtaken Ellinas under yellow flag conditions. Plato was given a 0.8s time penalty for the infringement and docked three championship points, this resulted in Ellinas being promoted to the final Pro category podium position. However, Ellinas was also found to have overtaken under a yellow flag – in this instance passing a back marker – for this he was docked two championship points.

As part of the 2018 podium procedure, overall winner Zamparelli selected at random the number 5 ball, which reverses the grid positions of the top five overall race finishers from round nine. This formed the starting grid for round ten; Wrigley, Plato, Ellinas, Harper, Zamparelli.

Race two
In dry conditions reverse grid pole sitter Tom Wrigley (JTR) got away cleanly at the start of round ten, however from second on the grid Lewis Plato (JTR) made a marginally better start to draw alongside Wrigley in the run down to the first corner. Ultimately Wrigley managed to maintain his lead with Plato slotting in behind him, meanwhile Tio Ellinas (Slidesports Engineering) occupied third.

Pro-Am runners Jamie Orton (JTR) and Seb Perez (Amigos Team Parker) immediately renewed their close battle from race one, the pair running nose-to-tail – Dan Vaughan (Motorbase Performance) kept watch from third spot in the category. Of the Am drivers Peter Mangion (Team Parker Racing) led Peter Kyle-Henney (IN2 Racing) from newcomer Dan Kirby (GT Marques) in a repeat of the Am pecking order from race one.

On lap four of the race Dino Zamparelli (Redline Racing) found a way by title rival Ellinas for P3, then set about closing the gap to front runners Wrigley and Plato – reducing it by as much as one-second per lap at one stage. Making equally good progress was 17-year-old GB 2018 / 2019 Junior Dan Harper (JTR), the Irishman recovering from a difficult start to overtake George Gamble (Amigos Team Parker) for P5 overall.

A close three-way battle formed at the front of the race between Wrigley, Plato and Zamparelli. Zamparelli closed on both Wrigley and Plato as they attacked and defended their positions from one another. Further back Pro category driver Valentin Hasse-Clot (Motorbase Performance) continued to impress in his first weekend of Cup GB racing. Having failed to finish the first race, the Frenchman started race two from the back of the grid yet he had managed to climb up to seventh position overall by lap seven. The fight in the Pro-Am category remained tight between Orton and Perez, while in the Am category Kyle-Henney, Mangion and Kirby were virtually inseparable.

Towards the closing stages of the race Harper mounted a successful challenge on Ellinas, passing the Cypriot for P4. Further up the road Wrigley took the chequered flag to claim his second victory of the 2018 season, Plato finished second having resisted consistent pressure from Zamparelli, the title contender claimed the final podium position. Orton recorded his second category victory of the weekend finishing just ahead of Perez in Pro-Am, with Vaughan taking the final category podium place. In what was quite possibly their closest battle to date, Mangion saw off the advances of Kyle-Henney in the Am category, with newcomer Kirby taking his second podium finish from as many races. For his performance at Snetterton Orton was handed the Driver of the Weekend accolade, Motorbase were awarded Team of the Weekend.