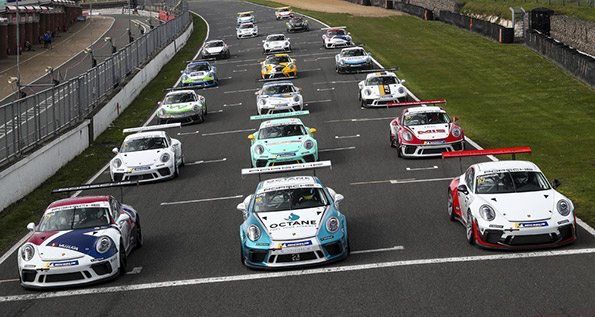 Motorsport GB enters what could be its most exciting season to date with two established championships welcoming a mix of familiar names and exciting newcomers – including two new teams. Cup GB, the fastest single marque GT racing championship in the UK, enters its 19th season which also marks the final year of the 485 hp second-generation ‘Type 991’ 911 GT3 Cup. A battle royale looks set to rage for title glory between reigning champion GB 2020 / 2021 Junior Harry King and one of the championship’s most successful drivers, 2015 and 2016 champion Dan Cammish.

Visit Islands Sprint Challenge GB enters its second season following a successful introduction in 2020 and will continue to showcase an important level in the Motorsport Pyramid with the 718 GT4 Clubsport. Both Am and Pro categories look set once again to provide close, exciting racing while new circuits will pose fresh challenges to team and drivers alike.

Despite the continuing global situation, both championships have full calendars of racing that will run between May and October 2021.

Cup GB retains its traditional position as a key part of the TOCA package, running in support of the British Touring Car Championship. Racing gets underway at Snetterton on 12 / 13 June when a grid of over 20 second-generation ‘Type 991’ 911 GT3 Cup cars will begin a season spread across 16 rounds and eight race weekends.

Leading the charge in 2021 is the reigning champion, GB 2020 / 2021 Junior Harry King (Team Parker Racing). King enters his second – and final – season as GB Junior following a sensational debut year, continuing with 2020 Team champions Team Parker Racing. In 2020, the 20-year-old from Maidenhead took 12 wins from 16 races, seven pole positions and 13 fastest laps en route to making the most successful start to a GB Junior career of any driver to date.

Taking the fight to King in what promises to be one of the most exciting title clashes yet will be one of the championship's most successful drivers of all time. 2015 / 2016 champion Dan Cammish (Redline Racing) returns to Cup GB following three seasons in the British Touring Car championship, two of which saw the Leeds driver battling for title honours. Cammish returns to his championship-winning team, Redline Racing, the most successful team in the championship’s history. In his quest to become the first driver to win three Cup GB titles, Cammish will aim to topple a number of records. He is just four wins away from overtaking Tim Harvey who sits at the top of the table with 36 outright wins, and four fastest laps away from usurping record holder Michael Meadows.

Lewis Plato (Valluga Racing) is another familiar name making his return in 2021. The Essex-based racer joined the championship in 2016 but took a season away from competition in 2020. A regular front-running competitor throughout his career, Plato has tasted the winner's champagne on three previous occasions and has been a consistent podium finisher – he is keen to reestablish himself as a genuine title threat with Valluga Racing.

With a full season under his belt, Will Martin (Richardson Racing) returns to Cup GB with experience and hunger. Four times a podium finisher in his debut season, including a race win at Thruxton in 2020, Martin already knows what it takes to win. Lorcan Hanafin (JTR) showed his speed in 2020 with four appearances on the Pro category podium and two overall fastest laps. The 18-year-old from Leeds makes his return to 2019 Team champions JTR, owned by 24 Hours of Le Mans winner for , Nick Tandy.

Leading the charge for a number of exciting newcomers to the championship is 18-year-old Kiern Jewiss (Team Parker Racing). Jewiss makes his sports car racing debut in 2021 following a highly successful career in single seaters. The former British F4 and British F3 champion is familiar with the TOCA package and will hope to benefit from having GB Junior King alongside him under the Team Parker Racing awning as he adapts to the demands of the 911 GT3 Cup.

Justin Sherwood (Team Parker Racing) scored back-to-back Am category titles in 2019 and 2020, and enjoyed his most successful season to date last year netting 10 category wins. Sherwood returns in 2021 as category favourite, although a group of fellow returnees will want to upset his run to a third title. Lucky Khera (Simon Green Motorsport) broke his podium duck towards the end of 2020 taking a category podium at Snetterton, while Adam Knight (Valluga Racing) and Justin Armstrong (Team Parker Racing) have also tasted the podium champagne in the past and will always pose a threat.

In 2018, the championship introduced reverse grids for the second race of each weekend, a feature that remains for 2021. Following the first race, a number between four and six is selected at random. This number determines whether the first four, five or six drivers across the line for the first race will have their grid positions reversed for the second. All other competitors will form on the race two grid according to their finishing position in race one. Introduced in 2019, should a competitor fail to finish in race one, they will take up a grid position for race two immediately behind the last finisher in their category from race one. Both races continue to feature a standing start.

The points structure remains unchanged across all three categories. A weighting for Pro category drivers in the first race rewards qualifying performance and partially offsets any penalty for a reverse grid placing in the second. In a similar spirit, fastest lap in each category during qualifying at each race weekend will be awarded two championship points. An overall points table calculated on the same basis as in 2020 will determine the Team and Rookie championships.

The search for the GB 2022 / 2023 Junior begins this summer. The Cup GB Junior programme aligns with similar support programmes offered internationally by – all are designed to nurture the racing careers of young drivers, fostering their entry into the Motorsport pyramid. In its search for prospective talent, the Junior programme offers one of the largest prizes in UK motorsport. This opportunity has already been a significant contributing factor to the racing careers of several professional drivers – over half of the current roster of factory drivers are former Juniors.

Current GB Junior Harry King was crowned 2020 Cup GB champion in his debut season, only the second GB Junior to have achieved this, and in 2021 enters his second year of the programme. Former GB Juniors Dan Harper (2018 / 2019), Charlie Eastwood (2016 / 2017) and Josh Webster (2014 / 2015) each took title honours before furthering their careers on the international motorsport stage. Applications for the GB 2022 / 2023 Junior programme will open this summer ahead of a Junior Shootout later in the year with details being published in due course on the championship’s website: https://www.porsche.com/uk/motorsportandevents/porschecarreracupgreatbritain/

Visit Islands Sprint Challenge GB enters its second season in 2021 having successfully taken up a place in the Motorsport pyramid in 2020. The championship for both amateur and professional drivers uses the 425 hp 718 GT4 Clubsport which, unlike the 911 GT3 Cup, offers drivers switchable ABS, traction control and stability control. Though optimised for racing, the car bears close similarities with its road-going counterpart comprising a high percentage of carry-over parts.

Visit Islands Sprint Challenge GB occupies a unique position in British motorsport, running alongside the two biggest domestic championships in the UK as well as keeping in touch with its club racing roots. A full calendar of 12 rounds will take place across six weekends running in support of the British Touring Car Championship, British GT Championship and Club GB Motorsport packages.

Theo Edgerton (Total Control Racing) returns to the championship following a successful 2020 season. The 17-year-old from Worcester took a maiden win at last season's final weekend at Silverstone, one of eight podium visits which mark him out as one to watch this year. Kent-based Ethan Hawkey (Redline Racing) made two appearances on the Pro category podium in his maiden season and secured one pole position. The 18-year old brother of 2020 Cup GB Pro-Am category champion, Esmee Hawkey, proved his pace throughout 2020 and now has the experience to mount a serious title challenge in 2021.

Among the exciting Pro category newcomers – several of which are yet to be announced – come Matthew Armstrong (Team Parker Racing) and Jack Bartholomew (Redline Racing). 22-year-old Bartholomew arrives with a wealth of sports car experience having previously competed in Lamborghini Super Trofeo.

In 2020 the Am category provided spectacular racing and 2021 looks like delivering more of the same. Ian Humphries (Valluga Racing) and Nigel Rice (Redline Racing) were regulars on the podium steps during 2020 – both make their return in 2021 to mount title challenges as do fellow podium finishers Peter Chambers (Chambers Runfold) and Carl Cavers (Valluga Racing).

Charles March (Team Parker Racing) and Charles Clark (IN2 Racing) both made their championship debuts at the final weekend of 2020 and return to mount a full championship attack in 2021. Charles Henry Gordon-Lennox, Earl of March and Kinrara, more commonly known as Charlie March, is the son of The Duke of Richmond and continues his move from historic racing into sports cars with the 718 GT4 Clubsport. Clark makes a move up the Motorsport Pyramid, progressing from the Club GB Motorsport championship where he competed in a .

The Islands Department of Tourism (CIDOT) remains title partner of the championship – now known as Visit Islands Sprint Challenge GB. In addition to the available prize pot of £32,000, the championship-winning driver in each category receives a seven-night luxury holiday for two to the Islands. The winners of last year’s championship – James Dorlin (Pro) and Ambrogio Perfetti (Am) – will be welcomed to the Islands when restrictions relating to the global pandemic allow.

Round one is scheduled to take place on Saturday 8 May at 16.40, round two on Sunday 9 May at 15.15 with live coverage on ITV4. Follow the latest Visit Islands Sprint Challenge GB news directly from Motorsport GB via Twitter – @RacesGB – where users can share experiences via the hashtag #SprintChallengeGB