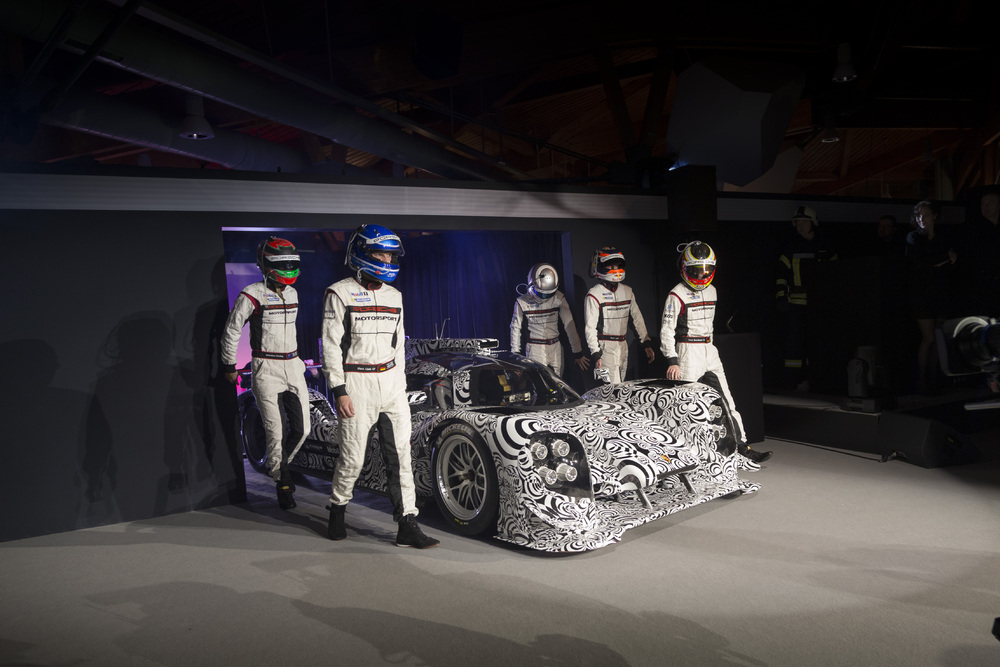 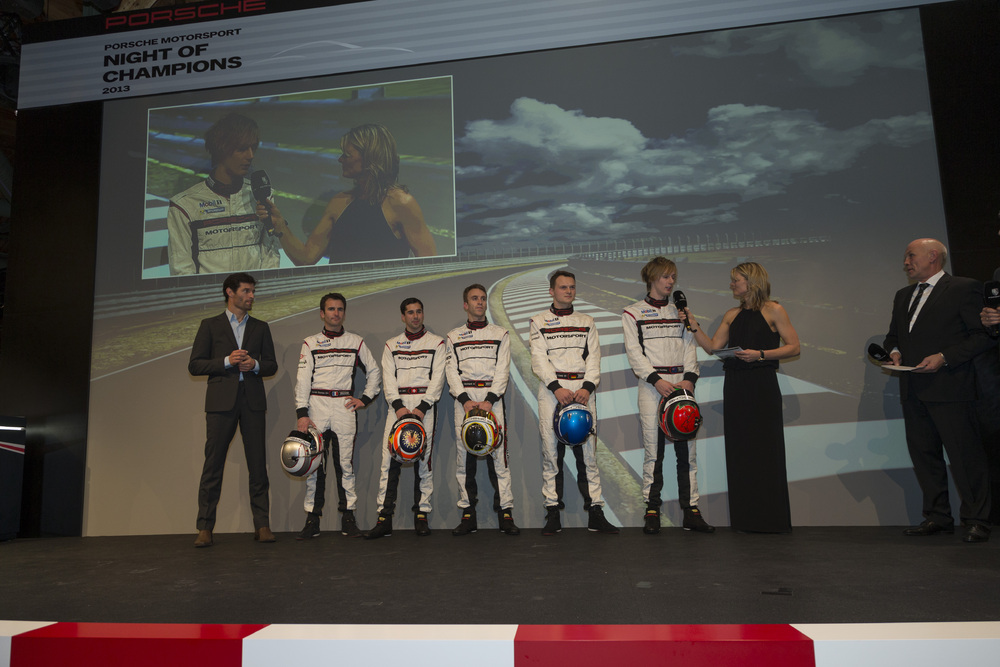 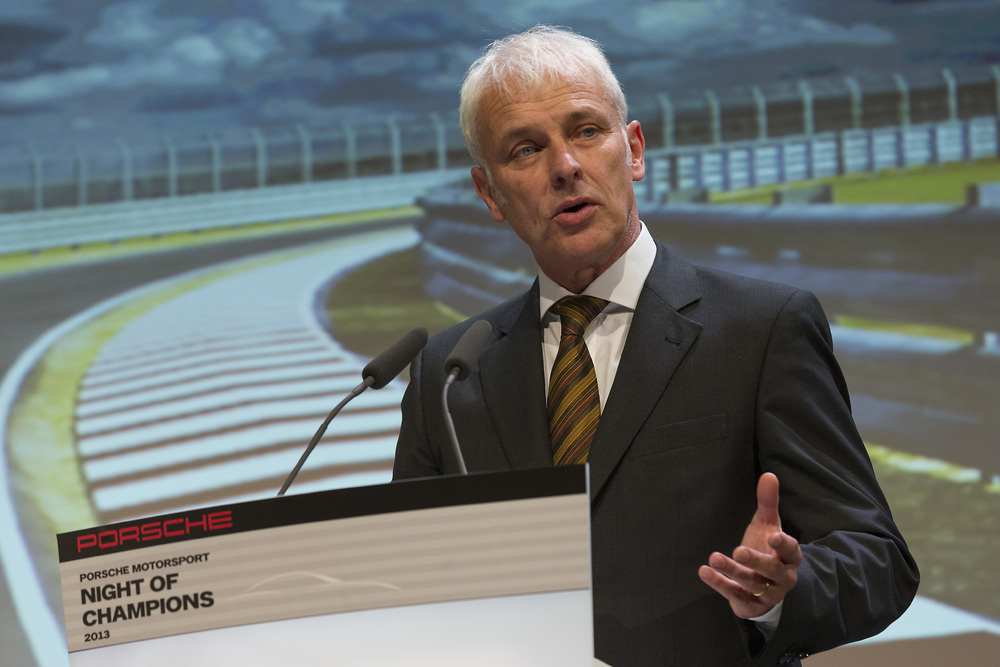 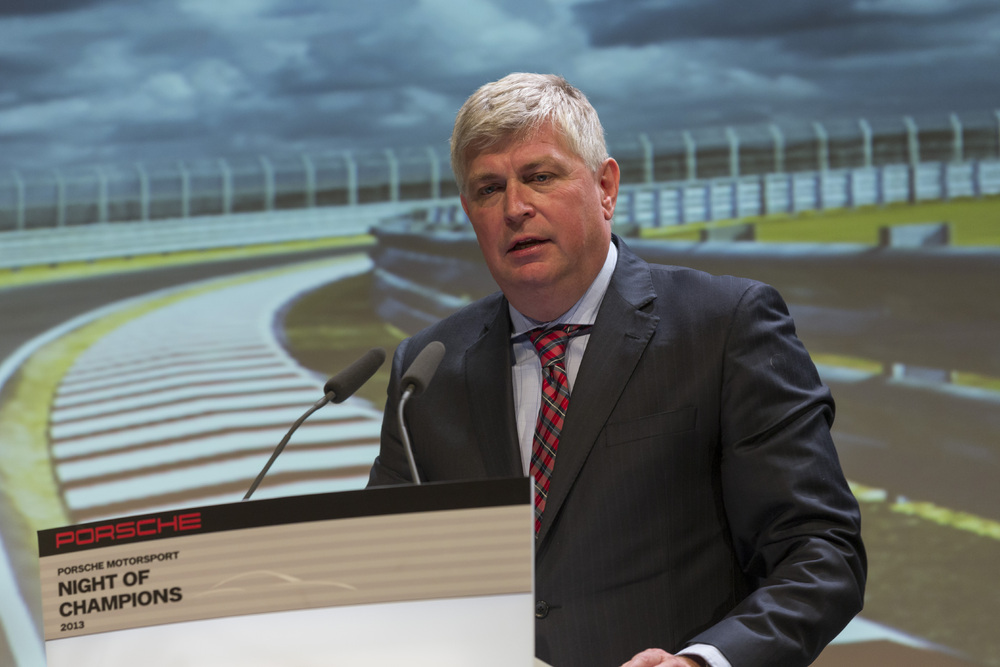 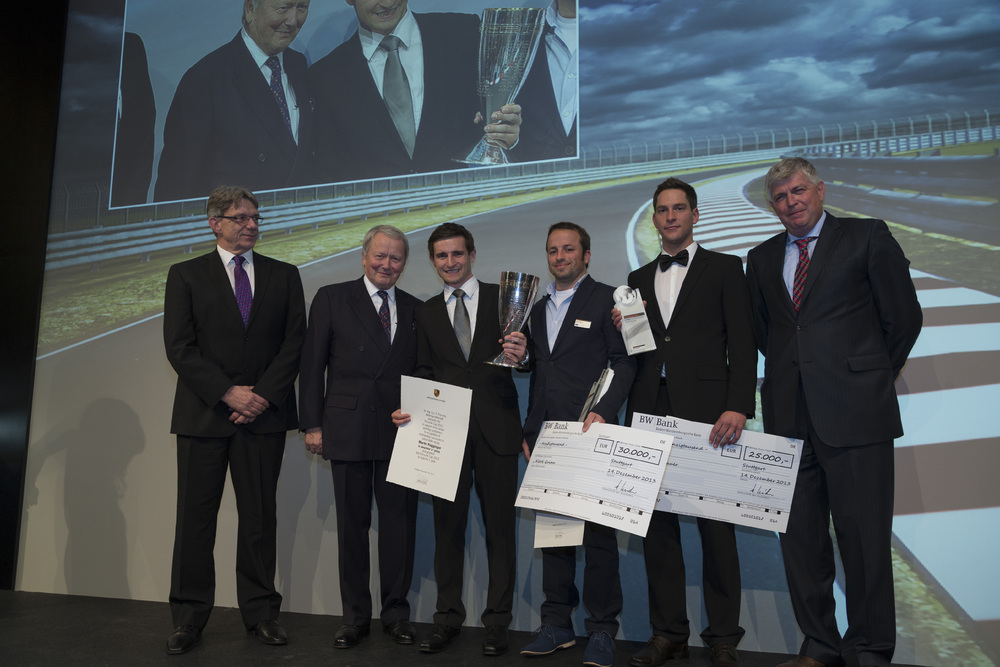 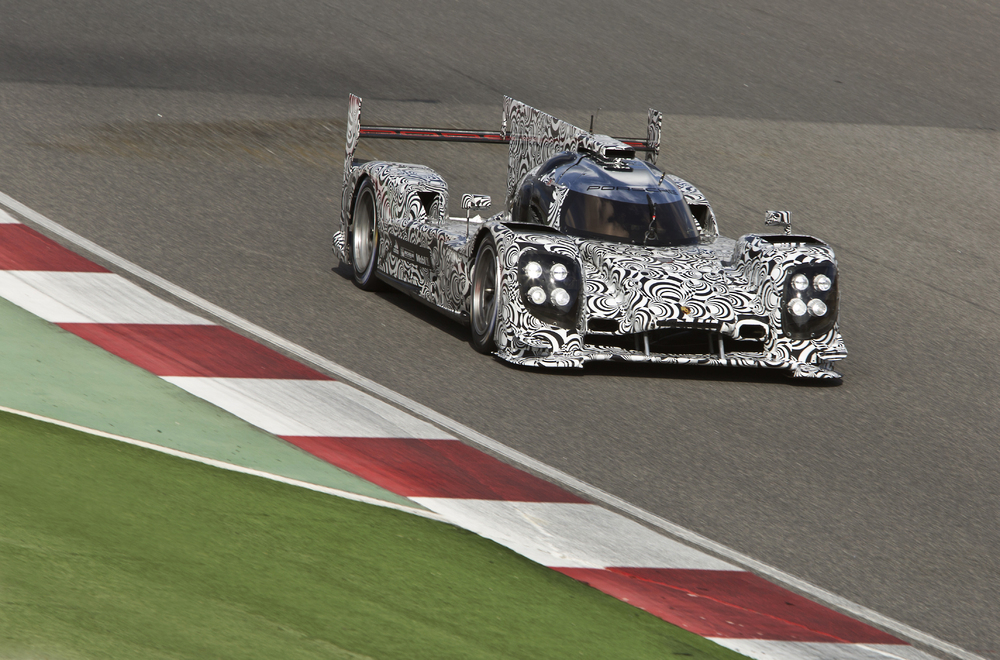 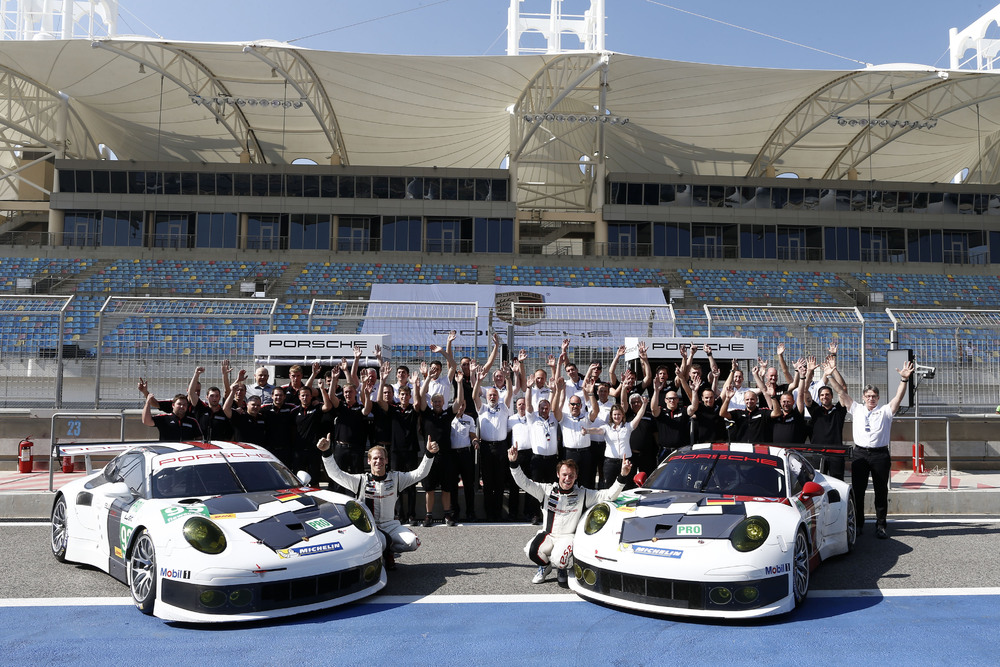 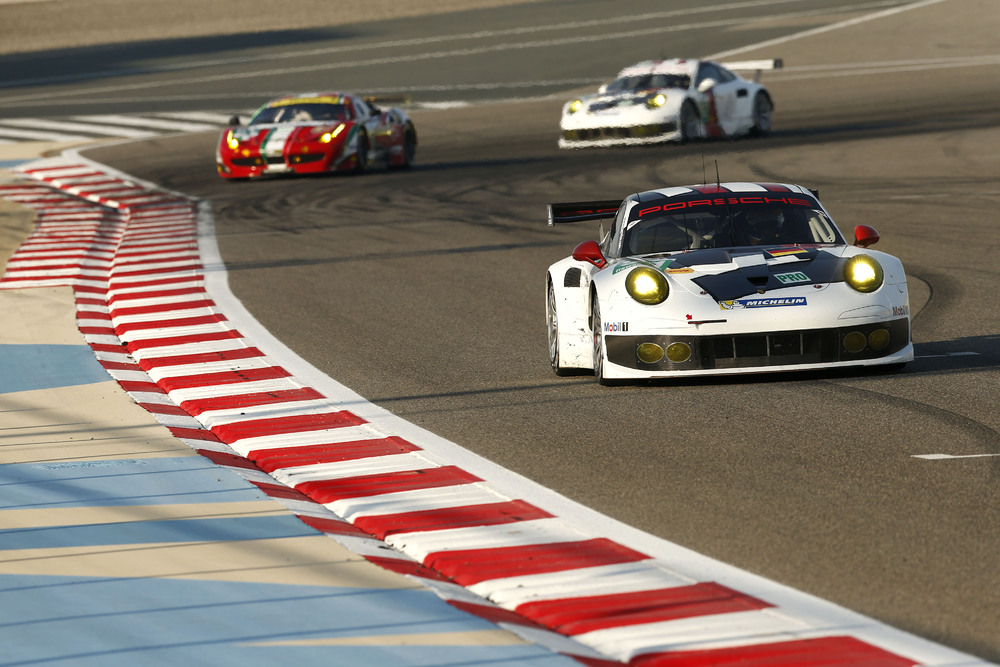 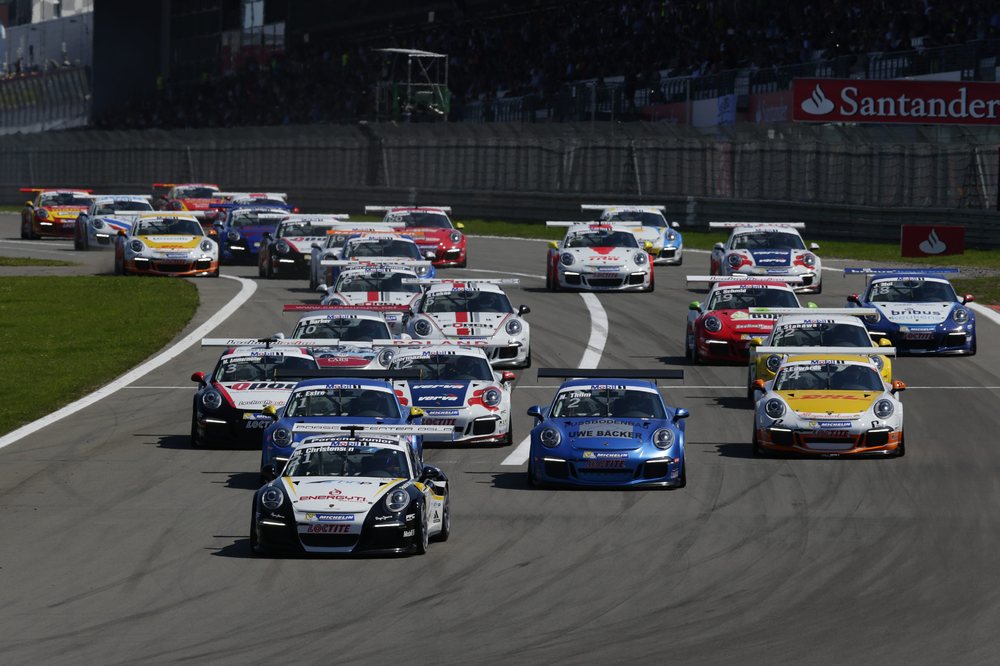 Stuttgart . heads into the 2014 season with the most extensive motorsport programme ever. In addition to its new LMP1 project, Motorsport sends two GT works teams to compete on race tracks around the world. AG Team Manthey again fields two 911 RSR in the Sports Car World Endurance Championship (WEC), as well as at the Le Mans 24 Hours. North America contests the new Tudor United Sportscar Championship with CORE autosport as the race team, with the new season kicking off at the Daytona 24 hour race on 25 January.

Motorsport’s driver squad has also grown to record size. For the upcoming season, has signed on 20 drivers including four juniors and a scholarship candidate chosen from the international one-make race series. All current factory pilots have received a contract for the 2014 season. “We’ve never had such a large driver line-up in the history of the company,” says Wolfgang Hatz, Board Member for Research and Development at AG.

919 Hybrid named, LMP1 driver squad complete
AG announces its driver line-up and the vehicle name for its return to the top category of the Sports Car World Endurance Championship (WEC) in 2014, with the season highlight in Le Mans: On the occasion of the Night of Champions this Saturday in Weissach, the young New Zealander Brendon Hartley (24) and long-standing works driver Marc Lieb (33) from Germany have been confirmed as regular drivers in the LMP1 race car, officially called the “ 919 Hybrid”. Already signed on for the LMP1 project are the drivers Timo Bernhard (DE, 32), Romain Dumas (FR, 36), Neel Jani (CH, 30) and the Australian Mark Webber (37).

Wolfgang Hatz, Board Member for Research and Development at AG, stated: “We are very proud of our strong international driver line-up. Three of the six drivers come from our own driver squad, two were even juniors. This is something we are particularly proud of.” Hatz continued: “The vehicle name 919 Hybrid follows on from the tradition of the Le Mans-winning 917, but it is also with a view to the 918 Spyder, and acknowledges the company’s embarkation into the hybrid future. With hybrid sports cars like the as a SUV, the Grand Touring , and the 918 Spyder three-litre super sportscar, we are on the right track. But to continue leading the way in the future and to merge sportiness with sustainability, we need to keep learning. Maximum efficiency in energy consumption is the directive of the new WEC regulations for the works-entered class 1 prototypes – and that is also the direction for the automobile future.”

Fritz Enzinger, Head of LMP1, explained: “We had a substantial number of applicants from all classes for the two 919 Hybrids. We were looking for experience, sheer speed, technical understanding, and we wanted team players because this is more important in endurance racing than in any discipline.”

Strong driver squad wrapped up with Hartley and Lieb
Timo Bernhard and Romain Dumas were the first drivers to be selected. The two bring the experience of seven overall victories each from 24 hour races – Nürburgring, Daytona, Spa and overall victory together in Le Mans with Audi. In July 2013, the ex-Formula 1 test driver Neel Jani joined the team, with Mark Webber onboard since the end of the 2013 Formula 1 season. Brendon Hartley and Marc Lieb now complete the squad.

Hartley left his homeland early to advance his racing career in Europe. Following on from successes in the Formula Renault and Formula 3 came the long-awaited Formula 1 contract – as a test driver but with precious little chance to race. Hence, parallel to his F1 commitments, Hartley turned to sports car racing. He said: “I’m incredibly proud that has chosen me. I was deeply impressed at my first outing in Le Mans. But to compete there in the LMP1 for an iconic company like is another dimension completely.”

Marc Lieb was 20 years old when his career as a race driver at took off: In the year 2000, he won the Junior driver selection. In addition to a raft of class victories, he also scored five overall wins at 24 hour races, four times on the Nürburgring, once at Spa. “I have been fortunate enough to celebrate victories with all over the world,” said Lieb, “even in the GT class at Le Mans. People there always asked when we would return to the LMP1 class. Since the project was given the go-ahead, I only wanted one thing: to be involved. Le Mans and , I can’t even begin to describe how excited this makes me feel.”

Mark Webber disclosed: “For me a lot of it is familiar, a lot is foreign, everything is special. I’m absorbing every bit of information I can and I’m already looking forward to the next tests.” The nine-time Grand Prix winner took the wheel of the 919 Hybrid for the first time several days ago in Portimão, Portugal.

Timo Bernhard has a few more kilometres to his credit. He said: “I’ve been with for 15 years and I feel an immense responsibility that comes with the return to LMP1. In the development, all your skills as a driver are required. The first premise is not to drive fast, it’s more to feel what the car is doing and to share even the smallest details with the engineers.”

Romain Dumas, who celebrates his 36th birthday today on the Night of Champions, underlined: “We are a good team for the development of the 919 Hybrid. We have a lot of work ahead of us. The 2013 class victory with Marc Lieb and Richard Lietz in the factory-run 911 RSR was really great, but now we’re heading into new territory, and with all the complex technical innovations, our new squad faces an enormous challenge.”

Neel Jani summarises: “It has always been my goal to one day fight for overall victory in the WEC and Le Mans. To do this you have to be part of a good works squad, and this is where I am right now. To compete for is a great honour and it comes with a lot of responsibility. We want to write a new chapter in the great history of motorsport, even if it takes time. The technology is completely new and we need to grow together as a team.”

Frédéric Makowiecki signed as works driver
Frenchman Frédéric Makowiecki (33) will join the ranks of Motorsport’s GT squad this coming season and pilot a 911 RSR. Makowiecki, who prefers to be called Fred Mako, is a regular competitor behind the wheel of race cars. He has collected more than nine years of experience in the cockpit of the 911. One of his greatest achievements was clinching the title of the Cup France in 2010.

“Frédéric Makowiecki is one of the fastest and most experienced GT pilots,” says Head of Motorsport Hartmut Kristen. “He has a great deal of experience on virtually all international race tracks and he knows precisely how to drive a 911 fast. I’m very much looking forward to working with him.”

acquires majority holding in Manthey Racing GmbH
has acquired a 51 percent stake in Manthey Racing GmbH and as such continues to expand its long and successful collaboration with the race outfit from Meuspath at the Nürburgring. “I’m sure this will help us to prepare even better for the challenges we are facing together in the WEC and I look forward to working with Olaf Manthey, Nicolas Raeder and Martin Raeder,” says Wolfgang Hatz.

Martin Ragginger wins Cup
After a successful season in international GT racing, Austrian Martin Ragginger (25) can celebrate winning the Cup as the best private driver in the world. On the occasion of the Night of Champions on 14 December in the R&D Centre at Weissach, Ragginger accepted the Cup from Dr. Wolfgang , Chairman of the Supervisory Board at AG.

After earning 5,940 points this past season, Ragginger also takes home a new 911 S with a total value of more than 120,000 Euros. Second-placed Klark Quinn (AUS) is the recipient of 30,000 Euros, with Robert Renauer given 25,000 Euros for third place. The Cup comes with a total purse of 253,000 Euros. As the brainchild of Ferry , this trophy has been awarded every year since 1970 to the best private race driver. Pilots earn points towards the Cup in 18 international race series as well as at selected long distance races.

Professional racer Martin Ragginger, who contested his first kart race at the age of nine, competed in six race series during 2013. He celebrated his greatest success of the season at the 24 Hours of Dubai, winning the A6-AM class for GT3 vehicles. Ragginger also tackled the ADAC GT Masters at the wheel of a 911 GT3 R and concluded the season in fourth overall. The Austrian earned more points towards the Cup in the VLN on the Nürburgring, at the Campionato Italiano GT, in the Grand-AM and in the Blancpain Endurance Series.

Trailing Ragginger by just 110 points, Klark Quinn (31) came a close second in the fight for the Cup. Quinn secured the 2013 Australian GT Championship title, winning three out of twelve rounds of the Australian series, and climbing the podium eleven times. At the twelve-hour race at Bathurst, Australia, he achieved third place at the wheel of a 991 GT3 R fielded by his team “VIP Petfoods Racing”.

After an exciting season, Robert Renauer clinches the third spot on the Cup podium. The 28-year-old from Jedenhofen in Bavaria earned Cup points at 17 races. In the ADAC GT Masters, the qualified car salesman secured second place in the overall classification with his team Tonino powered by Herberth Motorsport. Renauer went on to score more points at rounds of the Campionato Italiano GT, as well as in the Blancpain Endurance Series and the GrandAM Rolex Sportscar Series.

Mobil 1 Supercup continues with Formula 1
The Mobil 1 Supercup continues to run as part of the Formula 1 weekends. The successful partnership, which began back in 1993, has now been extended for another three years, up to and including the 2016 season. For more than two decades, the flagship of ’s one-make race series has been regarded as one of the major launching platforms for an international GT career.

“The Supercup is the crown of ’s brand trophy series. It has everything that makes international motor racing great. Many of our works drivers are the best sports car pilots in the world and they came from the Supercup,” says Motorsport boss Hartmut Kristen. “We’re delighted to be able to continue offering our partners and fans exciting racing in such an attractive environment like the top league of motorsport.”

The Mobil 1 Supercup heads into its 22nd season on 11 May 2014 in Barcelona. Nine events with a total of ten races make up the calendar. A highlight of the season will be on 12 October at the Supercup debut on the new Formula 1 circuit in the Russian Olympic city of Sochi.