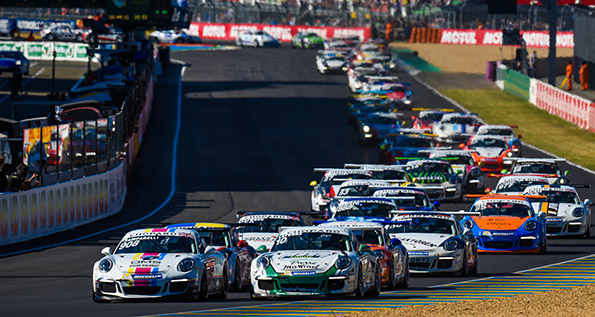 His 28th career victory in Cup GB could not have been sweeter or more hard-earned for Dan Cammish (Redline Racing) after a bold move on the final lap swept the double champion to the win in round seven at Cup Le Mans.

Hot on his heels, just half a second behind at the flag after 45 minutes of racing, was Dino Zamparelli (JTR), the pair also claiming the top two steps of the overall podium in front of a crowd of over 200,000, just hours before the start of the 85th 24 Hours of Le Mans.

As sunshine beamed down on the Circuit de la Sarthe, at 10.15 CEST the lights went green for the rolling start. 61 cars headed into the first corner and it was Zamparelli who made the best start from the front row, getting alongside pole sitter Latorre then into the lead by the chicane. Behind, Charlie Eastwood (Redline Racing) was flying from sixth on the grid – quite literally. A rapid start saw him alongside the pole sitter, but contact caused his car to leap into the air and resulted in a puncture for the GB 2016 / 2017 Scholar.

In the first corner confusion, Cammish was pushed wide and emerged fifth, just ahead of Euan McKay (Redline Racing) in sixth. Further contact behind brought out the yellow flags and casualties included JTR team mates Lewis Plato and Tio Ellinas, who would go no further.

For two laps Zamparelli led the field under safety car conditions, and making the most of the reshuffled pack was Tom Oliphant (Redline Racing), taking the restart in seventh after starting 16th.

Zamparelli made a good restart, defending the lead from Alessio Rovera of Cup France, before losing out in a slipstreaming battle along the Mulsanne Straight. As Rovera settled into his lead with Zamparelli in close attendance, Cammish was steadily working his way towards the leaders, claiming the lead just before half distance on lap four.

A slow zone on lap five caused an effective restart across the line which Cammish used in an attempt to break the tow up front, while Zamparelli took the opportunity to move himself into fourth. The resulting battle saw the leading quartet break away with Zamparelli in third, Oliphant settle into fifth after a move into Arnage, and Euan McKay in the thick of the action for the remaining places in the top ten overall.

Not far behind, last minute entry and top Rookie Ross Wylie (Slidesports) had driven an incredible race to move from 21st on the grid to 13th overall and fifth in the Cup GB standings. Meanwhile, a rapid tyre change from the Redline Racing team under the yellow flags had got Eastwood back into the race, but at the back of the field and on a mission to make up ground.

As the slipstreaming battles continued, tyre wear in the rising temperatures began to play a part. Cammish displayed the reducing traction with a lurid slide exiting the last chicane, before running wide on the penultimate lap at the Michelin Chicane and allowing Rovera through for the lead. Zamparelli had closed up, and the leading trio went into the final lap nose to tail.

Heading into Indianapolis for the last time, Cammish swept to the outside of Rovera, using the camber of the circuit in an incredible move that took him back into the lead. Quick to capitalise as Rovera recovered, Zamparelli went into second and shadowed Cammish through the final chicane to score a 1-2 finish for Cup GB after an intense Cup Le Mans.

Third in Cup GB was Oliphant, with Euan McKay equalling his best ever result in fourth. Wylie emerged as top Rookie and fifth having made up eight places from his grid position, while second-placed Rookie Tow Wrigley (IN2 Racing) made a similar gain to claim sixth in the Pro category. An impressive seventh was Eastwood, his charge back through the field from last saw him 23rd overall and claim fastest lap of the race on his final lap.

Once again taking the spoils in Pro-Am2 was Peter Kyle-Henney (IN2 Racing). One of only two drivers to have raced on the circuit in 2014, Kyle-Henney put that experience to good use with the category win and 10th in the overall Cup GB standings. Behind, Iain Dockerill (Asset Advantage Racing) came through the action in second, with Shamus Jennings (G-Cat Racing) completing the podium celebrations. Rookie Matt Telling (Welch Motorsport) equalled his best result to date in fourth despite the extreme demands of the 8.5 mile circuit. Peter Parsons (The Race Car Centre) recovered from contact with a recovering Class A driver to take the flag in fifth.

After an intense nine laps, Cammish not only increases his points lead in the Cup GB, he adds a win in one of the most prestigious Cup races to his tally. Victory on the international stage less than four hours before the 919 Hybrid bids for a record 19th overall victory for has also earned Cammish a full-day test in the Motorsport LMP1 simulator, which will take place in December.

Rounds eight and nine of Cup GB will take place at Snetterton on 29 / 30 July. Cammish will miss both rounds due to clashing Mobil 1 Supercup rounds, but has given himself every advantage in his quest to claim a record third Cup GB title. Watch the battle unfold at @CupGB on Twitter and @carreracupgb on Instagram.