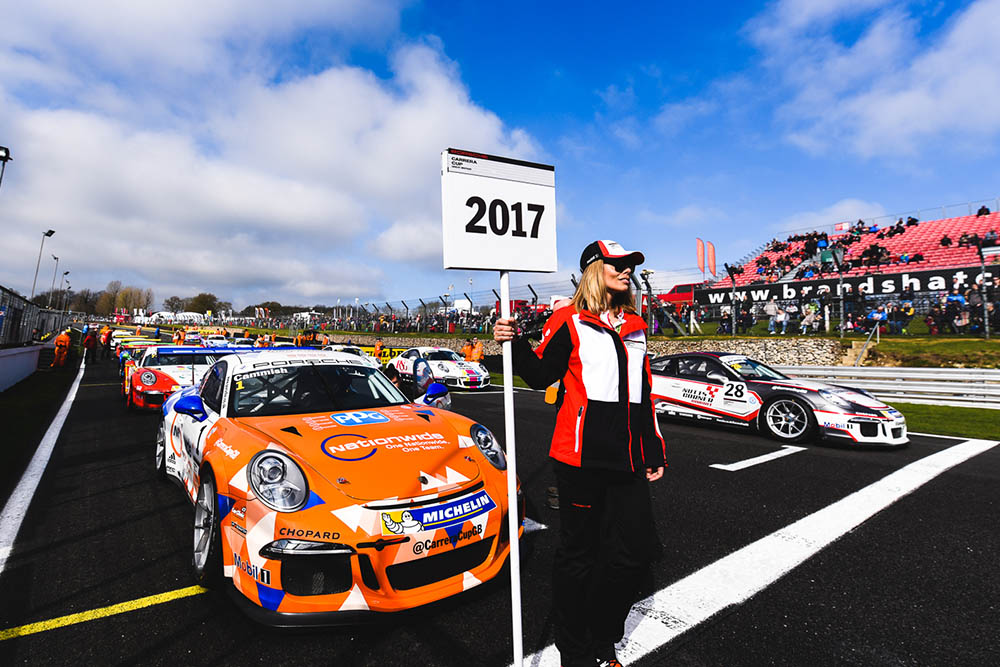 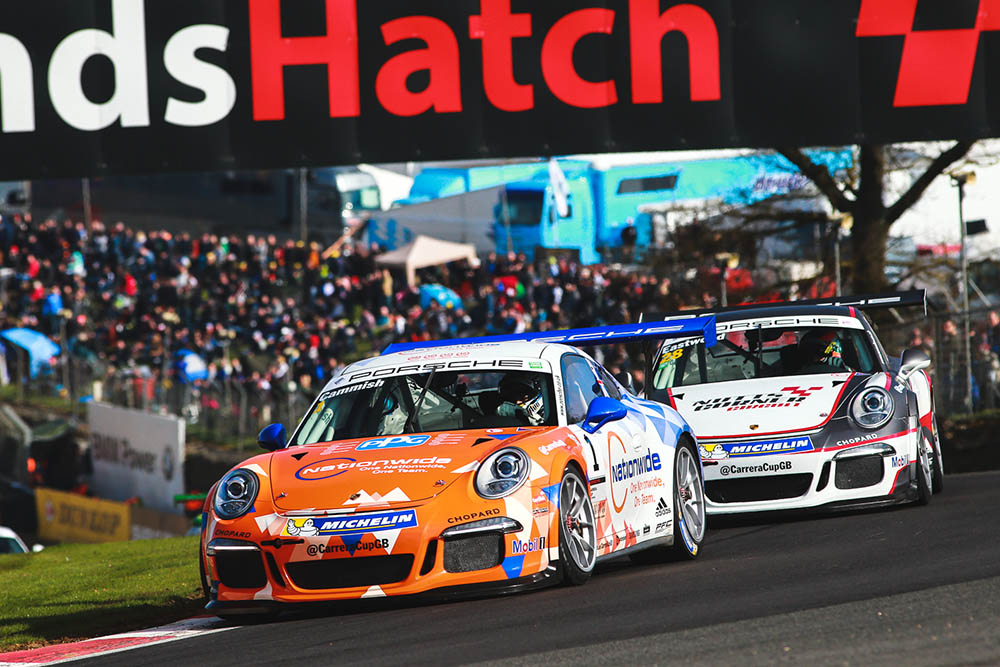 Cammish leads string of firsts as an action-packed 2017 gets underway Cup GB: Brands Hatch, rounds one and two – race report

Reigning Cup GB double champion Dan Cammish (Redline Racing) proved fractions of a second were all he needed as he got his quest for a record breaking third title underway with a characteristically polished pair of wins.

Hot on his heels and picking his way through an action-packed pair of races was GB 2016 / 2017 Scholar and 2016 Rookie champion Charlie Eastwood (Redline Racing) with a brace of second place finishes. Dino Zamparelli (JTR) proved his intent with third and fourth places, while team mate Lewis Plato (JTR) took his first championship podium in race one, but provided some of the action in race two when a puncture put paid to his race

Tio Ellinas (JTR) came through on top after a tough learning weekend for the Rookies, fifth place in the second race and fourth fastest lap underlining his potential.

Cammish heads to Donington with the early advantage, but a parallel Mobil 1 Supercup campaign means the reigning champion needs to build up a points cushion due to clashing weekends in July.

A gap of just 0.086s, or just 3.6 metres, between the top four after qualifying set the scene for round one, not only the first round of the 2017 Cup GB but also the first Sunday race of the 2017 TOCA season.

The race got underway in even closer fashion, with JTR team mates Lewis Plato and Dino Zamparelli on the second row tucked under the rear wings of the leading Redline Racing duo of Dan Cammish and Charlie Eastwood for the rolling start. The field maintained close order through Paddock Hill, before spreading out on the approach to Druids. Eastwood’s attack on Cammish was thwarted by a necessary defence from a racy Plato, but Tom Oliphant (Redline Racing) also looked purposeful from the off, lining up Plato for third while Zamparelli slipped back to fifth.

Making good progress in their first Pro category start were Euan and Dan McKay (Redline Racing), while behind them on the exit of Paddock Hill things got too close, Ross Wylie (Slidesports) ending up sideways and being collected by an unsighted, and Pro-Am2 leading, Peter Kyle-Henney (IN2 Racing). The resulting contact put both drivers and Jamie Orton (Redline Racing) out of the race and brought out the Safety Car.

Eastwood made a challenge for the lead on the restart, but Cammish was able to defend and hold his lead. The two pulled clear of the pack as they traded hundredths, Cammish never ahead by much more than half a second despite taking fastest lap, and the pair crossed the line in that order.

Plato consolidated his third place to take his first Cup GB podium, a just reward for his weekend pace. Zamparelli passed Oliphant into Druids and looked to be closing in for a late race challenge on Plato, almost getting alongside after Plato was caught in traffic at Clearways. However, a mistake at the exit of Paddock Hill put Zamparelli back to fifth with Oliphant a strong fourth after resisting pressure earlier on from Euan McKay, who ended sixth ahead of brother Dan in seventh.

In eighth overall and winning Pro-Am1 was Greg Caton (G-Cat Racing), the team manager coming through the mid-field chaos with a superb performance to take his first category win. The returning Alex Martin (Team Parker Racing) made an early pass on team mate Justin Sherwood, the two taking second and third in category respectively.

After Kyle-Henney’s early exit, Iain Dockerill (Asset Advantage Racing) made the most of the opportunity to take his first category win, with Shamus Jennings shadowing him to the line just 0.292s behind. Not far behind, Rupert Martin (Team Parker Racing) was battling for his first category podium with Peter Parsons (Race Car Centre). The pair managed to maintain their battle whilst keeping out of the way of the overall leaders, and despite Martin keeping ahead for most of their 33 laps, at the flag it was a delighted Parsons who came through for the final podium place.

Cammish and Eastwood once again lined up on the front row with Plato and Zamparelli behind them, this time for a standing start. Plato gave ground to Zamparelli and Oliphant and slipped to fifth, while Eastwood had a look at the lead which was swiftly covered by Cammish into Paddock Hill.

Behind, fast-learning Rookie Ellinas passed Euan McKay as they headed into Graham Hill, but before the race could settle a puncture for Plato at the exit of Paddock Hill caused the pack to separate. An unfortunate Tom Wrigley (IN2 Racing) had his charge up the grid interrupted as he spun in avoidance, while Ellinas squeezed through to inherit fifth.

Cammish stretched his lead with Eastwood unable to peg the gap as he had done in race one, a late opportunity for Eastwood provided by the safety car negated by a superb restart from Cammish.

Following Plato’s enforced exit, Zamparelli took up the baton for JTR and hounded Eastwood after the restart, a large amount of ground lost earlier in the race when navigating lapped traffic neutralised. Despite his best efforts, time ran out for Zamparelli and he had to settle for third spot and fastest lap.

As the yellow flags appeared, Ellinas seized an opportunity to pass Oliphant on the inside of Paddock Hill for fourth. This was subsequently reversed, but fifth place nevertheless marked an impressive debut for the Rookie. Also continuing their strong debut were Euan and Dan McKay, their sibling rivalry now moved up into the Pro category and spilling into a fraught few laps that ended with Euan in sixth and Dan in seventh.

The order swapped several times in Pro-Am1 before Alex Martin came through to take his maiden win in the category. Martin lost an early lead to a recovering Caton, who had been wrong-footed by the earlier action, when he made contact with a lapped car at Clearways, only for Caton to spin his lead away at the same corner. Caton held on to second with Sherwood in third..

Battles raged throughout the race in the Pro-Am2 category, less than a second separating the three cars of Shamus Jennings, Dockerill and Parsons in the early laps. The experienced and canny Dockerill made a move past Jennings as the leaders passed through, but Jennings returned the favour with a touch as he repassed late in the race at Druids. That allowed Peter Parsons immediately to better his best result in race one with a second place, and Rupert Martin to score his first podium visit.

is the world's largest manufacturer of racing cars; the 911 GT3 Cup race car competes in the Mobil1 Supercup, the world’s fastest international one-make Championship, which supports Formula One Grands Prix. The 911 GT3 Cup also entertains spectators around the world racing in the many domestic Cup Championships in Germany, Asia, France, Italy, Japan, Scandinavia and Great Britain.

The Cup GB held its first round in April 2003 and to the end of 2016 has competed over 14 seasons, 270 races and crowned nine different champions. The record number of outright wins stands at 36, with the most in a season at 12.

The GT3 R is the next step for drivers moving up to GT racing, while the all-new for 2017 911 RSR is the standard-bearer for the Works teams in IMSA and the WEC, contesting international blue riband sports car events like Daytona and the Le Mans 24 Hours.

scored its 18th and most recent success at the 2016 Le Mans 24 Hours in June when Romain Dumas (F), Marc Lieb (D) and Neel Jani (CH) took the chequered flag in their 919 Hybrid LMP1 after 24 hours of flat-out racing vs rivals Toyota. This trio went on to clinch the WEC Drivers’ Championship, and the Team also won the WEC Manufacturers’ title for the second year in a row.

For the 2017 season, Nick Tandy will contest the complete WEC season in the 919 Hybrid LMP1 full-time, joined by Neel Jani and André Lotterer in car #1. Team mates in car #2 are Timo Bernhard, Brendon Hartley and Earl Bamber.