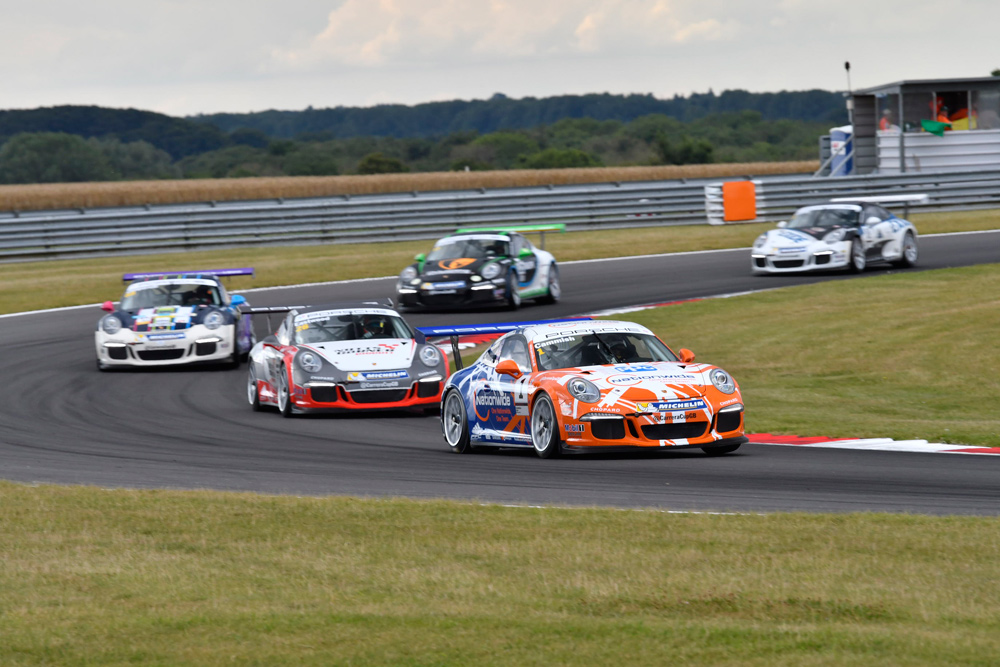 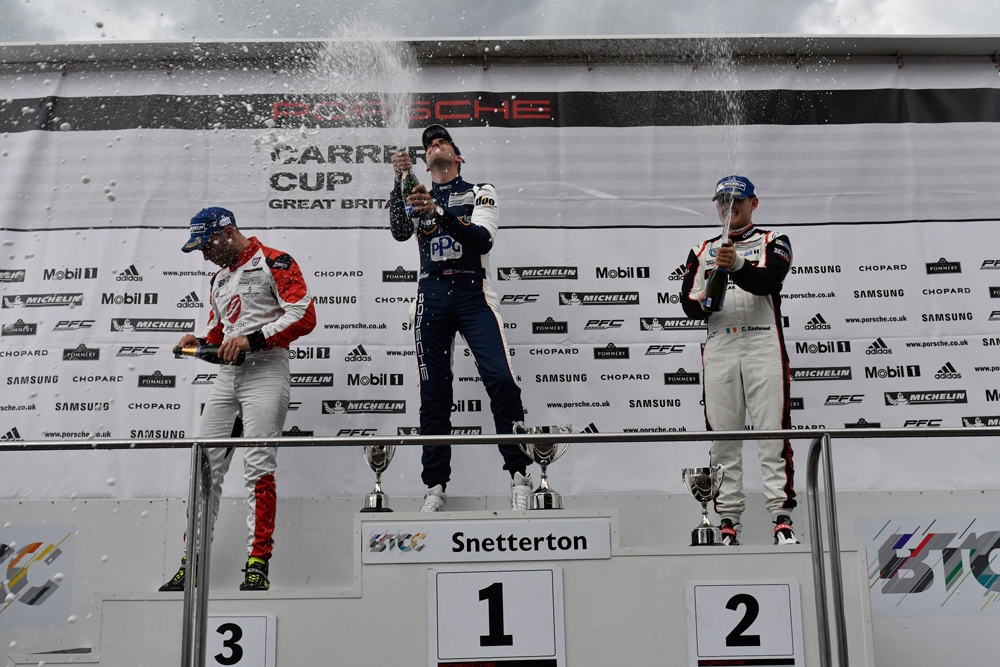 Cup GB: Snetterton, rounds nine and ten - race reportsCammish does the double to make it a century for Redline Racing

A commanding performance from the Redline Racing pairing of Dan Cammish and Charlie Eastwood ensured the team’s 100th victory in the Cup GB, a landmark achievement for the team.

From the first practice session both drivers looked in control at a circuit where Cammish dominated in 2015 and that Eastwood rates as his favourite in the UK. A flawless performance from the reigning champion denied Eastwood any opportunity to take his first win, although the GB 2016/2017 Scholar took his best results of the season to date.

The 25 car Cup GB grid opened Sunday’s race action at Snetterton for round nine, with Cammish and Eastwood lining up on the front row for the rolling start. A clean getaway for both drivers saw Cammish maintain the lead, a position he held until the flag:

“We got a good start and managed to build a gap to Charlie. I thought I’d settle into a rhythm, but Charlie was pretty motivated to get his first win and pushed me hard – we were flat out all the way to the flag.

“He’s got some speed and I expect the same in the next race. There’s nothing else I can do but keep up the pace in front. As the leader I set the pace, and I’d much rather lead and cope with the pressure than follow.”

Both front-runners had been trading top times and at one point the gap was down to just 0.3 seconds. As he anticipated, Eastwood was able to maintain a strong pace consistently throughout the 14 laps and came away with the fastest lap of the race and a season-best result:

“Dan got a bit of a gap at the start so I kept chipping away, but when I got close it was a different thing to get past. Dan’s really experienced and he knows what he’s doing, he doesn’t crack under pressure like most would. Four laps from the end we hit traffic and I dropped over a second which was it really. It was such a good race and gives us confidence for race two. We won’t change much as the car was really consistent.”

Converting his third on the grid into a podium finish was Tom Sharp (IDL Racing), fending off an early challenge from Lewis Plato (Team Redline) but unable to close the gap to the flying pair ahead.

An intense battle behind between Plato and Tom Oliphant (Team Redline) went all the way to the line, Plato always seeming to have the rapid Oliphant covered. A last lap attempt saw Oliphant go wide at Nelson, backing the fast-starting Stephen Jelley (Team Parker Racing) into Dino Zamparelli (GT Marques). This sparked a chain of events that ended in contact between the two and a heavy crash for Jelley on the run to the flag. The driver emerged unscathed, but will not take part in race two.

Euan McKay (IN2 Racing) wrote a similar lights to flag story in the Pro-Am1 category, the Rookie driver maintaining his qualifying form to take ninth overall and a comfortable category win – his fifth in a row.

Behind, brother Dan McKay (IN2 Racing) was being stalked by the impressive Greg Caton (G-Cat Racing), who proved himself every bit as capable behind the wheel as managing the team to take second. Dan McKay kept in touch to take the final Pro-Am1 podium position.

A three-way struggle for the lead in Pro-Am2 was separated by less than a second, with Adrian Barwick (Team Parker Racing) taking the class lead from Tautvydas Barstys (Juta Racing) and Peter Kyle-Henney (Parr Motorsport). However, contact between the leading pair left Kyle-Henney to take victory from Iain Dockerill (Asset Advantage Racing) and Shamus Jennings (G-Cat Racing), who defended well from the recovering Barstys.

A superb start signalled Cammish’s intention as he surged ahead to score a historic 100th win in the Cup GB for Redline Racing. Cammish had the legs of the hard-charging Eastwood, and as he extended his championship lead fittingly became the driver to take the team’s landmark win:

“It was a really good weekend and it’s been great to play a part in Redline Racing achieving their 100th win. I’m glad we’ve carried our pace over as we were so quick in testing and I’ve made a real effort to do that. We got a good start, the balance changed and came good in the middle which allowed me to control the pace.

“This weekend gives me the momentum back towards the end of the season after the weekend we had at Croft. We’ve always had so much speed, and seven wins, two seconds and a seventh isn’t bad.”

Completing his best weekend of the season and scoring a fourth podium to consolidate his third place in the championship was GB 2016/2017 Scholar Charlie Eastwood (Redline Racing). Despite trading fastest laps with Cammish in the mid stages of the race, an early mistake meant Eastwood was never quite close enough to challenge for the lead:

“It’s been great with two very solid results. Since Friday we’ve had really good pace, and on the first lap of that race I went wide onto the grass and lost a little momentum. Someone of Dan’s calibre doesn’t make mistakes so to catch that up in 12 laps is hard. We chipped away and closed towards the end but it wasn’t enough.

“Even though it’s been my best weekend and I’m really pleased, I’m a racing driver and always want the win. It’s a big step forwards and gives us hope for the rest of the season.”

Holding third place was Dino Zamparelli, the GT Marques driver pressured in the latter stages of the race by Tom Oliphant (Team Redline), who took fourth off the line after a slow start from team mate Lewis Plato. Zamparelli could do no more than minimise his points deficit to Cammish, a less than ideal situation for the Bristol-based driver after such a strong weekend at Croft:

“Even though we got a podium I’m not really happy as we’ve been struggling for pace. Over the first few laps it was okay but we tailed off a lot. It’s frustrating as I don’t know why - I felt okay but we just weren’t near the front. It’s damage limitation and we’ll have to go away, look at it, and see what we can do. We’ll regroup for Knockhill and hopefully be back in the fight.”

An early battle between Tom Sharp (IDL Racing) and Jonas Gelzinis (Juta Racing) was resolved in Sharp’s favour after Gelzinis outbraked himself into Brundle, leaving Sharp clear in fifth. The flying Euan McKay (IN2 Racing) had been running with the pair to lead Pro-Am1 after a good opening lap, but not one to be outdone by his brother, Dan McKay (IN2 Racing) steadily closed the gap to take the class win on the very last lap, his first of 2016.

A less fraught Pro-Am2 race was won by Tautvydas Barstys (Juta Racing), the Lithuanian driver putting together his most consistent race for the season to take the victory.

Peter Kyle-Henney (Parr Motorsport) took his fourth consecutive podium in second with a combined performance that saw him take the ‘Driver of the Weekend’ award, while Mark Radcliffe (Intersport Racing) kept his championship very much alive in third. An incident between Adrian Barwick (Team Parker Racing) and race one podium finisher Shamus Jennings (G-Cat Racing) left Barwick with a 10 second penalty.

A landmark win for Redline Racing and strong performances for team mates Cammish and Eastwood set the scene for rounds eleven and twelve which will take place in less than two weeks at Scotland’s challenging Knockhill. Follow the battle at @CupGB on Twitter and @carreracupgb on Instagram.