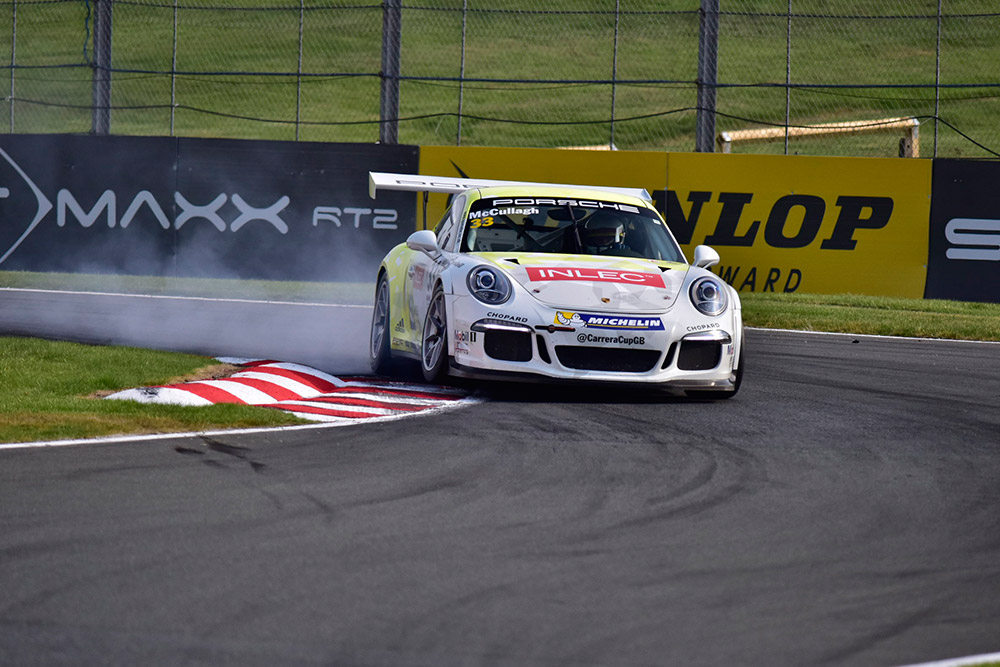 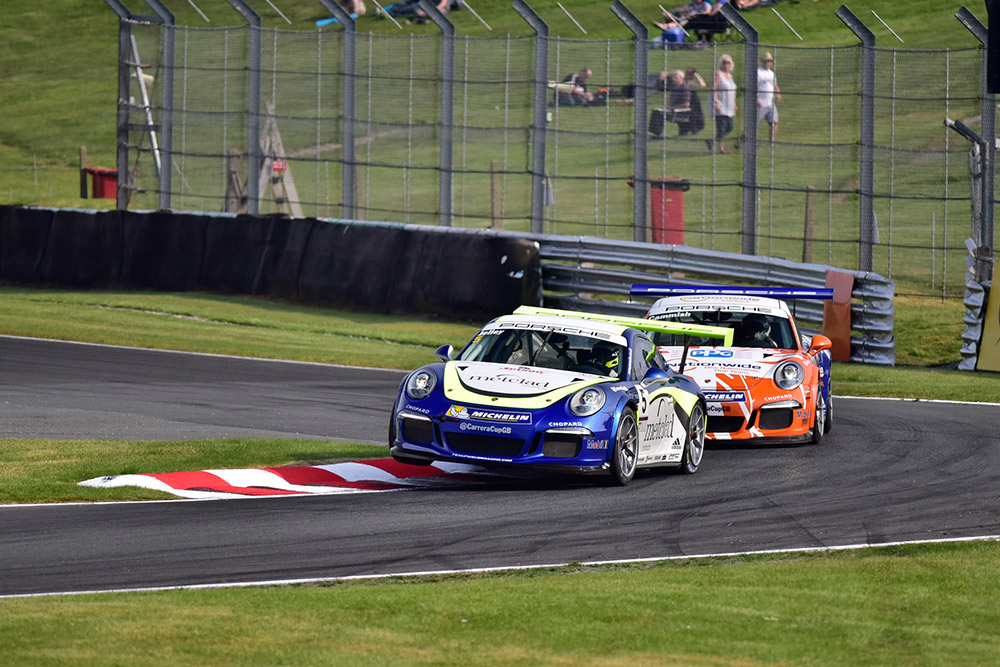 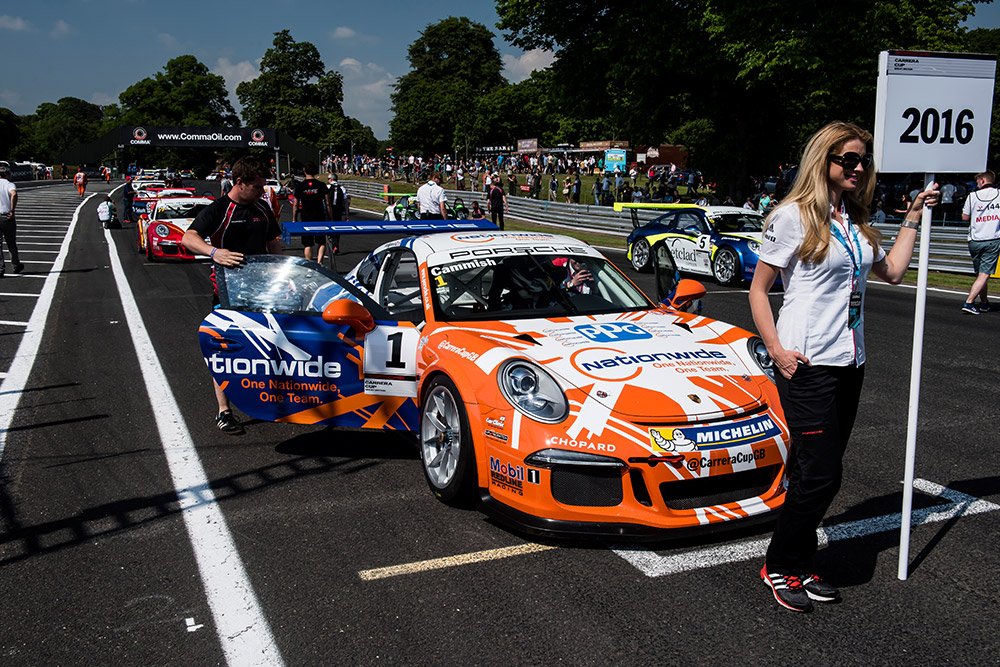 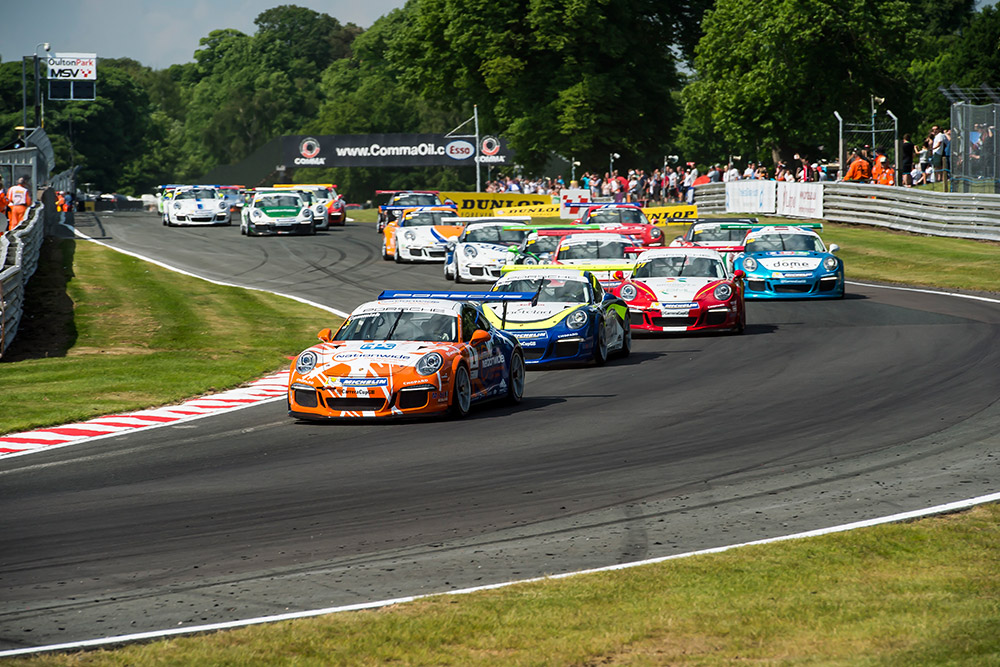 Dan Cammish (Redline Racing) leads the fastest single marque GT racing championship in the UK as it heads to his home circuit at Croft for rounds seven and eight, the mid-point of the season. While Cammish may hold the advantage, the competition to be his challenger has never been so close.

The duel for supremacy between the defending champion and Dino Zamparelli (GT Marques) took another turn at Oulton Park when Cammish scored a clean sweep of pole positions, fastest laps and wins. A combination of good luck and sheer speed saw him stay ahead of a pack that consistently produced lap times closer than at any point in the season so far.

A dramatic pair of races left Zamparelli with fifth and third places, results the Bristol-based driver was not entirely unhappy with after utilising his excellent race craft to good effect, but which emphatically highlighted the close-fought nature of a championship where fractions separate the competitors – only one second per lap covering the entire Pro category. Zamparelli remains Cammish’s top challenger, but his focus for Croft will be to keep clear of the chasing pack and maintain his pressure on the Yorkshireman.

Undoubtedly encouraged by the season so far is Cup GB veteran Stephen Jelley (Team Parker Racing). Only denied a victory in round five by a misunderstanding when passing a team mate, Jelley will be hoping his luck changes and his ability to mix it at the front will convert into wins. Similarly, reigning Rookie champion Tom Sharp (IDL Racing) has not had the best of luck in 2016, despite building on his 2015 performance. A tough tyre decision at Silverstone and damage at Oulton Park have reduced his points haul so far this season, but the Surrey-based driver will be looking for better at Croft. Meanwhile, the returning Jonas Gelzinis (Juta Racing) has been steadily accumulating points and keeping out of trouble, the Lithuanian driver an outside bet for a strong result after winning at Croft in 2013.

Keen to bring their own pressure to bear are the Pro category newcomers, all of whom showed excellent pace at Oulton Park as they continued to get to grips with the demands of the 460 hp 911 ‘Type 991’ GT3 Cup cars. An official exclusive test taking place at Croft before the free practice sessions will offer valuable additional mileage, as the Pro category permits only limited testing.

With his university studies at their conclusion, Lewis Plato (Team Redline) has been able to focus his full attentions on racing, fourth and third on the grid at Oulton Park and his first Rookie class win underlining the benefit to his raw pace. Another Rookie rapidly building his speed is Alessandro Latif (GT Marques), at one point in round six holding the fastest lap of the race and looking to maximise the additional test session for Croft.

Leading the Rookie category and lying third in the championship is 2016/17 GB Scholar Charlie Eastwood (Redline Racing). Gaining valuable experience every lap, Eastwood has quickly established himself as a consistent top three prospect after scoring his third podium of 2016 in round five.

A solid fifth in the championship going into Croft is Tom Oliphant (Team Redline), the newcomer making the best of his ability to fight through a pack but hoping for a strong qualifying result to allow him to translate this into an overdue podium finish.

Hot on the heels of the Pro category are the Pro-Am1 contenders, who arrive at Croft with just five points separating the top three. Currently holding the advantage is Euan McKay (IN2 Racing) after a pair of category wins at Oulton Park, but brother Dan McKay (IN2 Racing) will be challenging hard after a superb comeback from an early spin saw him third in category with fastest lap in round six. Consistent Rookie Sean Hudspeth (Parr Motorsport) will be aiming for his second category win, while 2014 category winner Justin Sherwood (Team Parker Racing) and Pro-Am2 veteran Peter Jennings (G-Cat Racing) will be aiming to convert their 2016 podium visits into a victory.

Two-time Pro-Am1 winner and reigning Pro-Am2 champion is local man John McCullagh (Redline Racing), the only driver in the category alongside Peter Jennings to have finished every race in 2016. The young at heart 52-year-old lives just six miles from Croft, close enough to cycle to the circuit each morning. No doubt this will leave the Yorkshireman enough energy to challenge for another category win in front of his friends, family and fans.

Pro-Am2 has produced consistently close and exciting racing, evidenced by Mark Radcliffe (Intersport Racing) and Tautvydas Barstys (Juta Racing) arriving at Croft tied for the category lead. Impressing in his first season, Radcliffe has already won three times, while the more experienced Barstys took his third victory at the last round. Iain Dockerill (Asset Advantage Racing) and Peter Kyle-Henney (Parr Motorsport) have demonstrated strong pace and will be podium hopefuls, with Shamus Jennings (G-Cat Racing) looking for another start such as he made at Oulton Park to secure his third podium of the season.

In 2015 Dan Cammish took his first clean sweep of his Cup GB career at Croft and, while he enjoys a small respite of 25 points at the head of the championship table in 2016, the race is on to see who will be the one to challenge the dominant Yorkshireman at home.

Rounds seven and eight will take place on Sunday 19 June at 12.42 and 16.19 respectively, with live coverage on ITV4. Follow the battle for the championship at @CupGB on Twitter and @carreracupgb on Instagram.