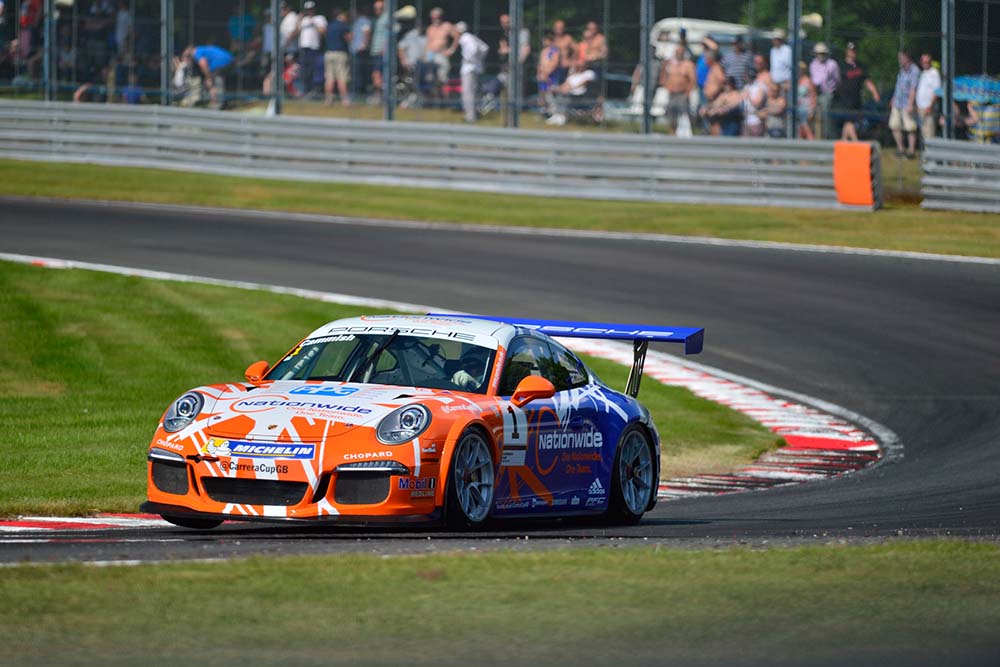 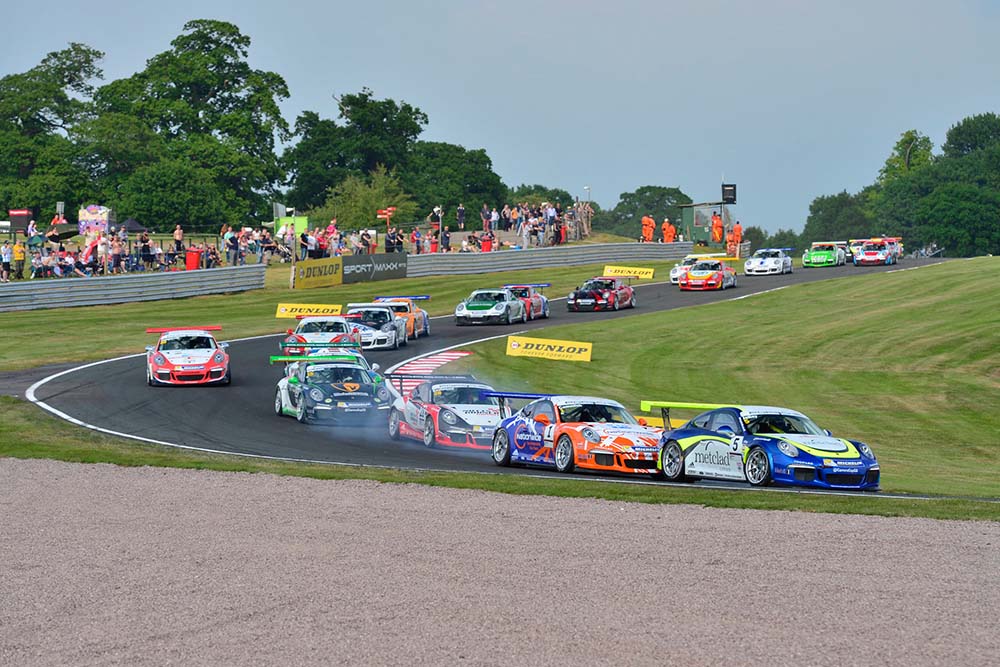 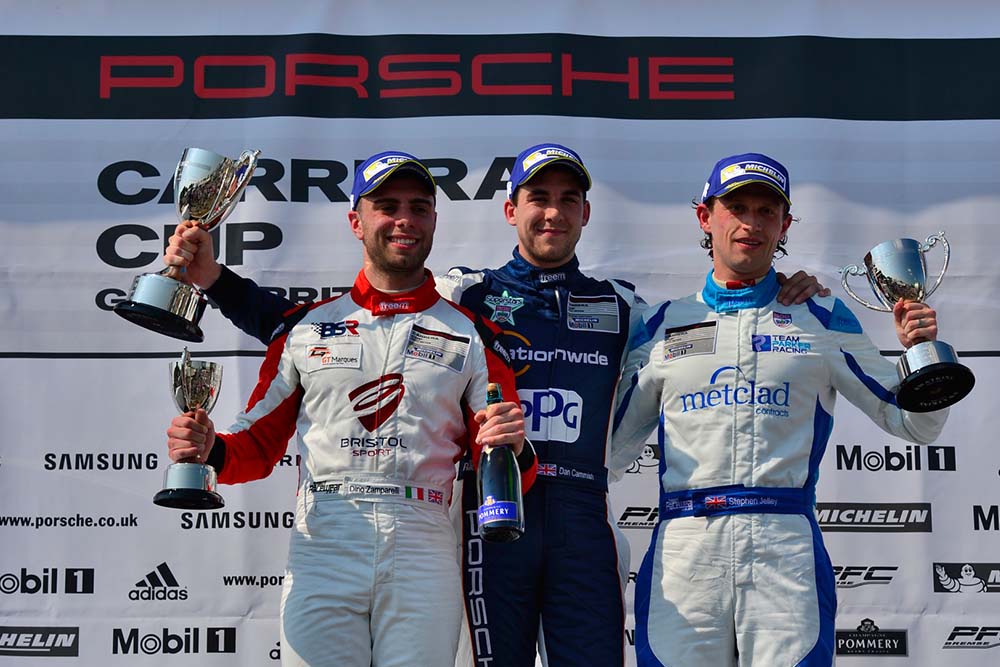 Race one
In a tense race heightened by gathering storm clouds, Stephen Jelley (Team Parker Racing) led from pole position-sitter Dan Cammish (Redline Racing) until a split-second decision when lapping traffic saw Jelley take to the grass in avoidance, gifting the lead and win to a grateful Cammish:

“It wasn’t a perfect race. I did my best at Old Hall, but Jelley held the outside. He was aggressive as I knew he would be and kept his wheel alongside into Cascades so I couldn’t defend. It’s so hard to pass here, so I pushed him hard and hoped he’d make a mistake. When I dropped back and was going for fastest lap he went off passing a backmarker. It’s never nice to win like that and I’m not going to celebrate this one, but the point makes a difference to me.”

Despite taking the lead in determined fashion and looking in command of the race, a disappointed Jelley remained philosophical:

“It was all looking very good. We found a few things with the car at Silverstone and things were coming together. We knew we’d go well and I made a good go of the first few corners as I said I would, but we were really unfortunate. It’s all about staying positive and we should have won the race – I might get the luck tomorrow.”

As the lead group traded fastest laps, damage to the rear of his car following heavy contact on the opening lap forced Tom Sharp (IDL Racing) into the pits to check damage to the rear of his car. This was a bitter blow for the reigning Rookie champion, who went on to post the third fastest lap of the race. Also showing good pace ahead of round six was Alessandro Latif (GT Marques), a missed practice session not stopping him from taking fourth fastest lap.

As with the other categories, the battle for honours in Pro-Am2 was one of tenths. Mark Radcliffe (Intersport Racing), Peter Kyle-Henney (Parr Motorsport) and Adrian Barwick (Team Parker Racing) were covered by less than a second for most of the race, taking the flag in that order.

On taking over the overall lead, Cammish immediately set about posting the fastest lap, but Jelley responded to hold the gap at just 0.5 seconds. What would have happened next can only be the subject of speculation as Peter Parsons (The Car Loan Centre) lost control of his car on the exit of Island Bend, bringing out the red flag. This resulted in the Pro-Am2 driver emerging unscathed from his car, but meant the race was declared with five minutes left to run.

Race two Dan Cammish secured his fifth win from six races in 2016 with a drive that left nothing to chance. The reigning champion made a perfect start to secure a clean sweep for the weekend with two pole positions, two fastest laps and two race wins. A delighted Cammish left Oulton Park with an increased lead in a championship he is emphatically claiming as his own:

“I got a great start, and when I didn’t have to lose time defending into the hairpin I knew I was clear. We had so much speed like we did last year and the car was great. I just concentrated on my own race and pulled away. It’s good for the championship and I needed a weekend like this to give me breathing space. Now it means I can even afford a DNF, but we were really strong at Croft last year.”

Cammish sprinted away from the standing start, conscious of defending from a determined Stephen Jelley after his bold move at the first corner in round five. No defence was necessary, and the Yorkshireman showed his pace as he pulled away to take the flag eight seconds from the pursuing Jelley.

While Jelley’s race in second may have been a lonely one, the battle for third involved most of the Pro category drivers. Tom Oliphant lost out at the start, slipping to eighth, while Charlie Eastwood and Dino Zamparelli were notable advancers. Zamparelli closed on Lewis Plato to begin the challenge for third, while a short trip across the grass into Knickerbrook cost Eastwood his splitter, if not a position.

Plato was able to hold off Zamparelli, who in turn was defending from a charging Tom Sharp. At the end of lap 14, Zamparelli got a good run on Plato at the exit of Lodge, pulling alongside the third-placed driver as they crossed the line and taking a podium place as the pair arrived at Old Hall. The focus then shifted to a close-fought contest for fourth which saw Plato hold the place after Sharp tried to pass on the outside of Lodge at the end of the penultimate lap, the reigning Rookie champion slipping back to finish eighth after losing traction on the run-off area.

Euan McKay (IN2 Racing) converted his strong pace into another race win in what was the 200th race for the Pro-Am1 category, and earned himself the ‘Driver of the Weekend’ award in the process. The Rookie kept close to the pace of the Pro category runners and always had the measure of the consistent Sean Hudspeth (Parr Motorsport) who scored a second podium finish. Storming back from an early spin which saw him at the back of the field was Dan McKay (IN2 Racing), a gap of just five seconds to second-placed Hudspeth at the finish line testament to an amazing performance on a circuit where overtaking is difficult. This combined result saw IN2 Racing presented with the ‘Team of the Weekend’ award.

Providing some of the best racing of the weekend was the Pro-Am2 category, Shamus Jennings (G-Cat Racing) making another fantastic start to lead in class at the end of the first lap. Category leader Mark Radcliffe (Intersport Racing) spun in his pursuit, leaving Tautvydas Barstys (Juta Racing) to pass Jennings for the lead, a position he maintained to the flag and earning the Lithuanian a place in the Pro-Am2 record books as winner of the category’s 200th race. A three-way fight for second ensued with Jennings holding on to second from Iain Dockerill (Asset Advantage Racing) after Peter Kyle-Henney (Parr Motorsport) pirouetted exiting Knickerbrook.

Rounds seven and eight take place in two weeks’ time at Croft in Yorkshire. Last year on his home circuit Cammish was supreme, but the contest to be his challenger is closer than ever. Follow the battle at @CupGB on Twitter and @carreracupgb on Instagram.