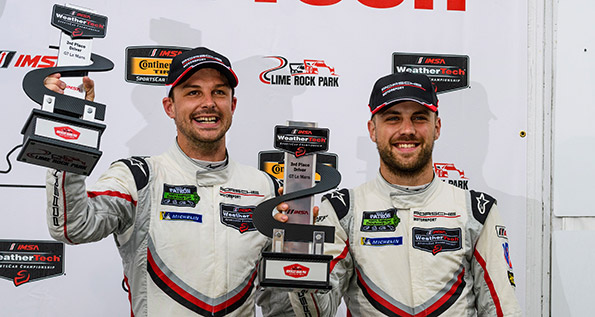 clinched a podium spot at round seven of the IMSA SportsCar Championship in Lakeville. The Mid-Ohio winners Laurens Vanthoor from Belgium and New Zealander Earl Bamber finished third in the GTLM class with the 911 RSR. Driving the sister car, Patrick Pilet from France and Britain’s Nick Tandy, the winners of this year’s Sebring 12-hour race, took the flag in fifth place after two hours and 40 minutes. Vanthoor and Bamber had been running in second place over a long stretch and managed to gradually close the gap to the leader. However, two mistakes cost the 510-hp sports car with the starting number 912 valuable time and one position. In the overall classification, still ranks third in the manufacturer’s category.

In a summery temperature of 24-degrees Celsius and under slight cloud, thousands of fans on the grassy hills surrounding the racetrack in Lime Rock Park in the US state of Connecticut witnessed both 911 RSR make a clean start off the line. Vanthoor, as the qualifying and start driver, took off from second on the grid at a race contested exclusively with GT vehicles. While running in second place, the current winner of the Le Mans 24-hour race handed the car off to Bamber, who managed to shorten the gap to the leader. However a driving error, which saw Bamber take a short detour off the track, and time lost due to a mistake during the second pit stop, robbed the #912 car of a possible victory.

Bad luck hampered Pilet and Tandy in Saturday’s race day. Thirty-five minutes before the qualifying session, Pilet slid from the track during the warm-up, and slightly damaged the #911. The team managed to swap out the damaged parts, however there was not enough time to check the setup of the 911 RSR. Pilet took up the race from eighth on the grid but wasn’t able to make up any positions on the narrow racetrack. However, his teammate, Tandy, managed to work his way up to fifth place during his stint thanks to the team’s good pit stop strategy and an inspired overtaking manoeuvre two minutes before the end of the race.

In the GTD class, Wright Motorsports fielded a 911 GT3 R at the seventh round of the season. works driver Patrick Long from the USA and Selected Driver Christina Nielsen from Denmark held a promising lead at times but ultimately had to settle for eighth place.

Round eight of the IMSA SportsCar Championship is contested on 5 August at Road America in Elkhart Lake in the US state of Wisconsin.

Pascal Zurlinden, Director GT Factory Motorsport: “It was another difficult race for us. Our car was constantly competitive so we could attack under any situation. But because of the mistakes that began in the warm-up and ended with the #912 car’s last pit stop, we missed out on first place. This is the third race in a row where we unfortunately haven’t been rewarded for our hard work. We’ll work harder over the next two weeks so that we can get back on the road to success again at Road America.”

Patrick Pilet ( 911 RSR #911): “The car was extremely fast over the whole weekend, but my mistake in the warm-up threw a spanner in the works. On this racetrack, where overtaking is particularly tricky, it’s difficult to compensate for a grid spot at the back of the field. Although I was faster at the beginning of the race I couldn’t make up any positions. When Nick got a clear run he managed to shorten the gap, but at the end of the day it was simply too big. The team’s tactics and strategy were definitely spot-on. It’s important that we managed to collect valuable points towards the manufacturer’s classification with third place for the sister car.”

Nick Tandy ( 911 RSR #911): “Given that we had to start from the back of the pack after our off in the morning, we thought about a suitable strategy: We wanted to have a very fast car, particularly at the end of the race and we anticipated a safety car phase. Unfortunately we got caught up in traffic at the start and lost too much time. Still, we managed to make up three positions.”

Laurens Vanthoor ( 911 RSR #912): “You shouldn’t really complain about a podium placing, but we could have won today. We lost 14 seconds due to a pit stop error – which is basically the gap to position one. We had the pace to win, but unfortunately we only came third.”

Earl Bamber ( 911 RSR #912): “We had a fantastic car all day, a real winner. Unfortunately I made a mistake during my stint which cost us five seconds. On top of this came the unfortunate pit stop. We simply can’t make any more mistakes at the next race – then we’ll be at the front.”