Right from the pit lane

The 911 is celebrating its 40th anniversary in 2014. Hans Mezger, an engine expert and one of the ’s founding fathers, took the occasion to journey from the past to the present—with two charged-up companions.

The sports-oriented gentleman likes checkered upholstery. The light-green leather is a perfect example, framing not only the sports seats. The radio has an integrated cassette deck. A long thin gearshift emerges from the center console. You can’t miss the “H” on its knob—with gears one, two, three, and four—to make sure drivers know what comes next.

But shifting remains a complex task. Despite the little dia­gram, drivers have to not only find the right slot, but also feel it. To accelerate from second gear (bottom left) to third (upper right), you’ve got to pay attention to the signals traveling from the palm of your right hand to your brain. Light resistance will require a gentle change of course. It’s what we might call a sensitive approach, even for Hans Mezger, whom the industry press once christened the “Engine Pope” and the “father of all engines.” He knows the inner workings of the car like no one else, but before this fortieth anniversary tour he hadn’t driven the museum piece in years. 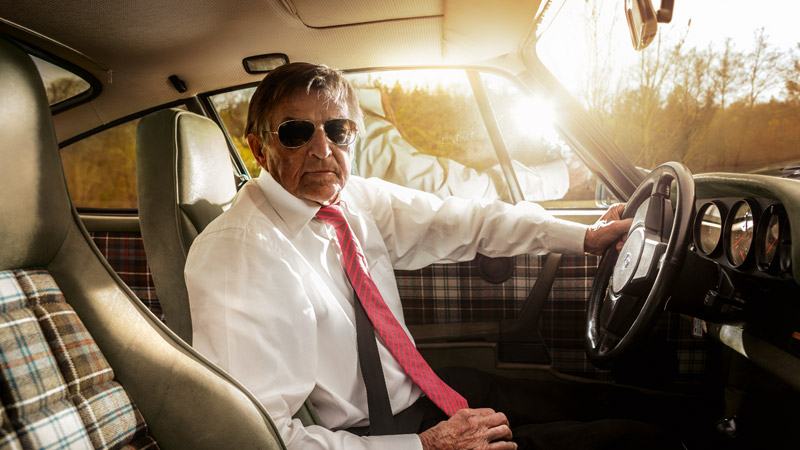 A first-generation 911 , built in 1976. It has an air-cooled boxer engine with six cylinders, turbo-­charging, a three-liter displacement, and 191 kW (260 hp) at 5,500 rpm. Torque of 343 newton-meters at 4,000 rpm. It needs 5.5 seconds to accelerate from 0 to 100 km/h, and has a peak speed of more than 250 km/h. Its fuel consumption (converted to the current New European Driving Cycle – NEDC) is 14.95 liters per 100 kilometers. A timeless beauty in oak green, with a drive system that has always been the measure of all things and is once again expected to enjoy a great future. 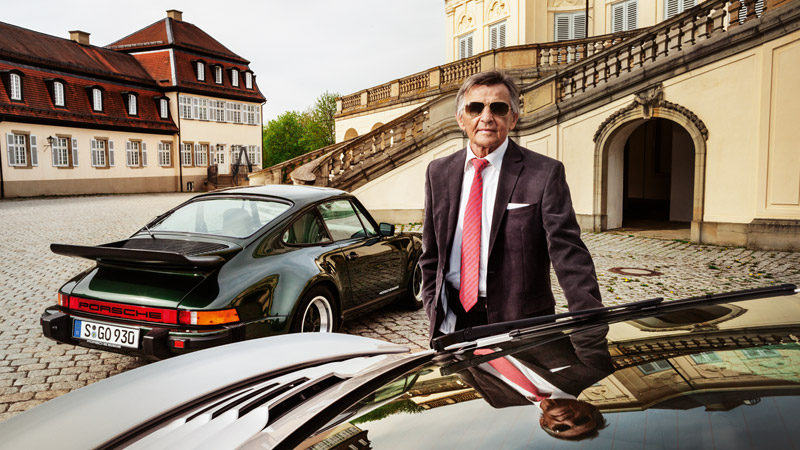 Two kings of the road and “Engine Pope” Mezger at Castle Solitude near Stuttgart.

Mezger quickly becomes animated when talking about his , with which he has a lot in common. A fit man in his mid-eighties, he’s in the same good shape as the sports car. The fact that you need as much strength to steer as you do to shift and brake makes him excited. “This is what driving a car is really like,” he says with pleasure, and pushes down on the accelerator to the point that makes the into a . When the rev counter shows around 3,700 rpm, the turbocharger in the rear springs to life and vehemently presses more air into the combustion chambers.

That’s the moment when you’re pressed back into the seat without warning and imagine Apollo 11 going into second-stage ignition. The takes off. “The gets going when other engines die down,” says Mezger with satisfaction. “And that just adds to the driving pleasure.” It’s a high-performance principle that, back then, took a little getting used to for most drivers. The —a sports car right from the pit lane. 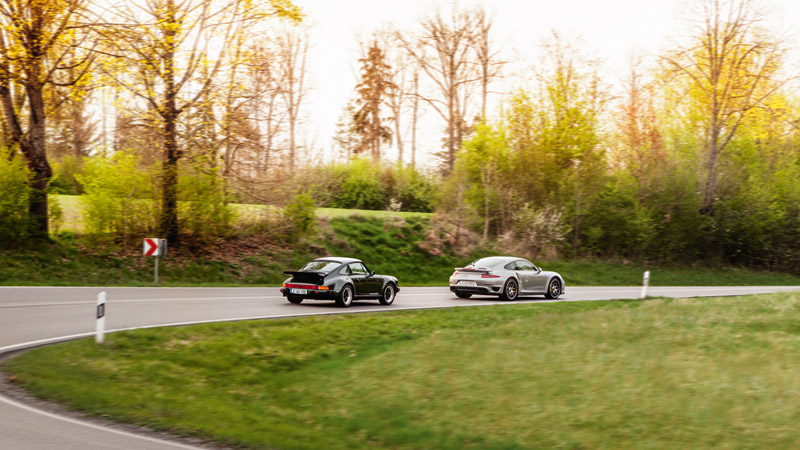 Double charge: The 930 and 991 on the historical Solitude racetrack.

In the early 1970s, put fear into the hearts of its competitors in the popular Can-Am series. Naturally aspirated induction engines with seven- or eight-liter displacements had been setting the tone, but drove to win after win with the 917 and its considerably smaller displacement. The car’s turbo drive principle had actually been considered unsuitable for racing. Although no one disputed its higher output, they thought its response properties were inadequate. The turbine needed a lot of time and high rpm levels before it finally went into action.

Mezger, who is a qualified engineer, and his colleagues from the racing engine department discovered how to get around that. The turbocharger was made smaller, and the exhaust gases that were not used were channeled past the charger with the help of a bypass system. “All of the auxiliary systems that we applied already existed,” recalls Mezger. “They had just been used incorrectly and discarded. We rediscovered—and reinvented—them.”

The 917/30 Spyder of 1973 generated 882 kW (1,200 hp) with a 5.4-liter displacement. By changing the regulations, however, the Americans did away with the fearsome winner. The oil crisis came, and everyone including the FIA was suddenly thinking about fuel efficiency and production-based racing cars. had already made the decision to let series cars share in the ’s success. In the fall of 1973, presented the first 911 at the Frankfurt International Motor Show (IAA). It was something of a premature birth, from which 400 road-going vehicles were to be produced as the basis for a racing car. In 1974 the first road-going 911 then appeared at the motor show in Paris.

The car was initially the object of internal controversy. The sales department thought it would never fly, considering it too sporty and also too pricey at 65,800 German marks (US$ 24,343 at the 1974 exchange rate with the West German currency)—and that during the oil crisis. To promote sales, the was fitted out as a high-end 911. But still the unsettling question remained: Would be stuck with the 400 cars?

In August 1975, Mezger and Ernst Fuhrmann, the board member in charge of technology, set off on a trip to Columbus, Ohio, to display the car. The journalists were shocked by its unusual driving properties at first—but then quickly became fans. “It was as if they had all been waiting for a car like that,” says Mezger. The automotive press touted the “mania on wheels,” and the 400 s were quickly snapped up. More than 30,000 s were sold until the end of the air-cooled 911 engines in the mid-1990s. “Without the 917, there probably never would have been a 911 ,” he observes. The car from the pit lane had arrived. 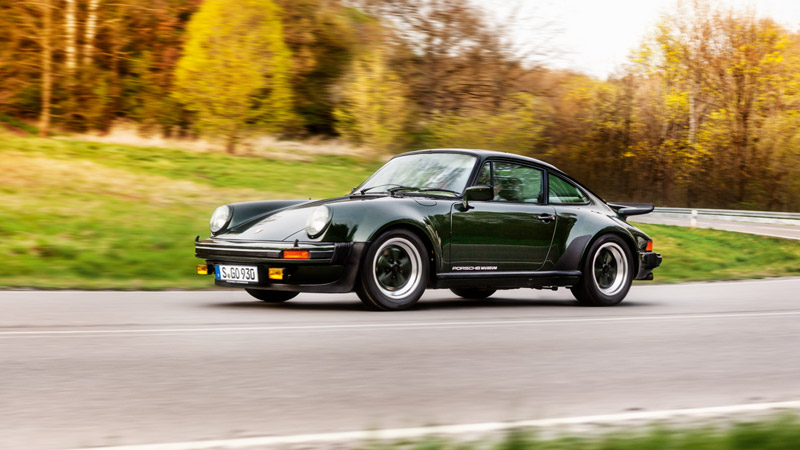 Change of scene: Mezger leaves the checkered upholstery for an all-leather black sports seat with fully electric eighteen-way adjustment and a steering wheel with shift paddles. He’s now operating a water-cooled 3.8-liter boxer engine with direct fuel injection, VarioCam Plus (stepless inlet-side timing and lift), and bi-turbo-charging with variable turbine geometry (VTG). You’ll search in vain for a shift-stick knob with an “H” on the sloping center console of the latest generation of the 911 S. The ’s power can now be put to optimum use only via an automated seven-speed dual-clutch transmission. We’re talking 412 kW (560 hp), and an average fuel consumption in the NEDC of 9.7 liters per 100 kilometers.

The sports car drives commandingly down the country road with an engine that can wait patiently until its power is needed. “Downsizing,” remarks Mezger suddenly, while taking a gradual curve to the left. “The word didn’t exist back then, but that’s exactly what we did when we got the best possible output from small engines with low fuel consumption.” During the ’s stretch of victories on the racetrack, Mezger often gave talks at universities and to engineering associations. Everyone wanted to know more about the performance-boosting power of the underlying principle. He always pointed out that turbocharging is also superbly suited to reducing fuel consumption.

“No one was interested in that back then,” he notes. And when the s slowly disappeared from racetracks in the late 1980s under the dictate of new regulations, he considered that a step backward. “The charger also dampened. That means the s were quieter than other racing cars and had fewer emissions. It’s only now that everyone is talking about downsizing with support.”

has always been consistent in its thought and development, to this day keeping engines small and increasing their efficiency. The best example is this 911 S in the sure hands of Hans Mezger. “It has 560m horsepower,” he says and shakes his head. “Thirty years ago we were winning major races with this output. And today you can take it out on a Sunday drive. Compared to those days, all you have to do now is steer.” Time goes by, and the does more than endure: it flourishes. 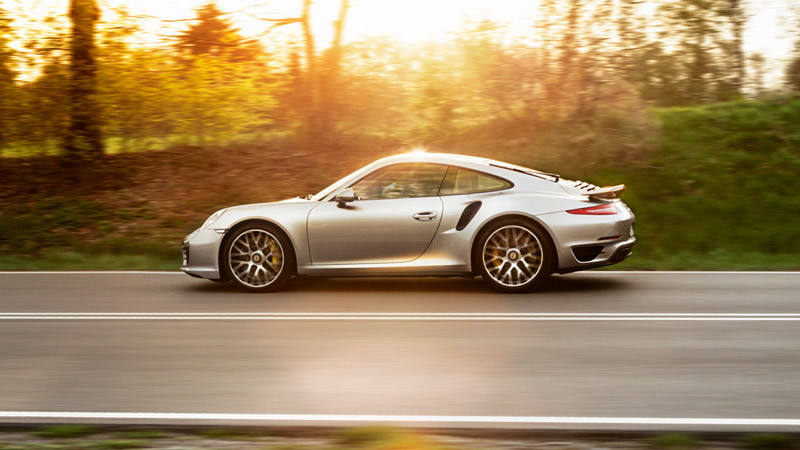 Fuel efficiency: object lesson from the Formula One 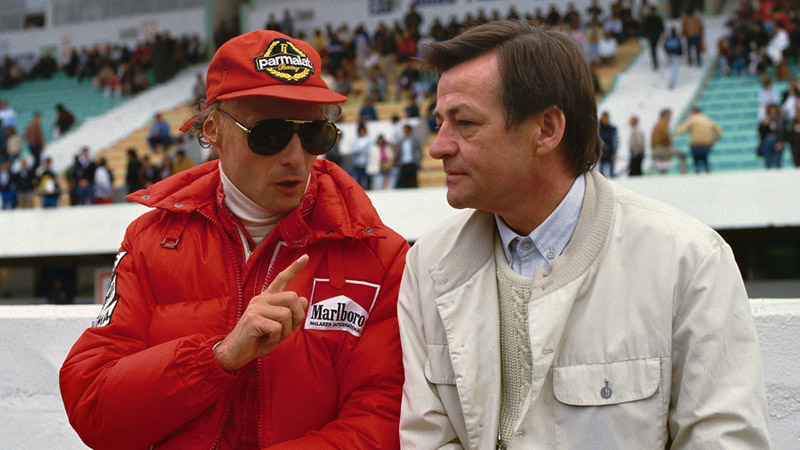 Formula One driver Niki Lauda (left) and Hans Mezger at the racetrack in 1985.

Company founder Ferry was always clear: “We race in order to build the best sports cars for the road.” This alliance always served the 911 well, which owes its existence to the 917/30 Spyder. A perpetual winner in the Can-Am series, it was known to the Americans as the “German tank.” Even after its Can-Am career, the 917/30 with driver Mark Donohue at the wheel set a new world record for circuit courses in 1975 on the 4.28-kilometer high-speed oval in Talladega, Alabama, with an average speed of 355.86 km/h.

But engine expert Hans Mezger had another favorite when it came to the fuel efficiency of engines, namely, the Formula One assembly that developed in the 1980s as a TAG for McLaren. Thanks to exhaust gas charging, its 1.5-liter V6 engine generated well over 588 kW (800 hp). The regulations limited gasoline consumption depending on the type of engine, which led to a dispute in Kyalami in South Africa in April of 1984. Niki Lauda and Alain Prost were out alone in front in their McLaren TAG , winning easily after 75 circuits and 307.8 kilometers. The rest of the field was lapped or left at the side with an empty tank. The competitors suspected fraud and lodged a protest, claiming that performance of this type could not have been possible. McLaren had to open up the tanks for inspection. Everything was in order. McLaren won world championship honors three times in a row with the .