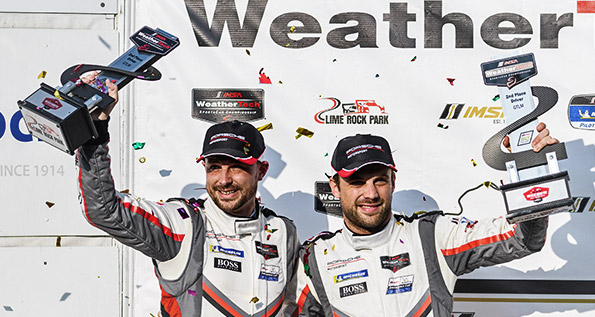 Stuttgart. The GT Team has successfully defended its lead in the manufacturers’ championship at round seven of the IMSA WeatherTech SportsCar Championship. Laurens Vanthoor (Belgium) and Earl Bamber (New Zealand) secured second place at the wheel of their No. 912 911 RSR at Lime Rock Park (USA). Their brand colleagues Patrick Pilet (France) and Nick Tandy (Great Britain) claimed fourth place in the No. 911 sister car. In the GTD class, the customer team Pfaff Motorsports achieved their first class victory in the North American championship with the 911 GT3 R.

The two 911 RSR fielded by the works team headed into the race sharing the first grid row after a strong qualifying performance. In the morning session, Laurens Vanthoor had set pole position in a time of 49.133 seconds – a new record for the GTLM class at Lime Rock. Nick Tandy planted the No. 911 sister car on position two for round seven. At the start, both ca. 510 hp vehicles from Weissach defended their front spots, with the pair extending the gap until the first scheduled pit stop.

In the second half of the race, the two vehicles were repeatedly hampered by traffic. Moreover, with temperatures of around 33 degrees Celsius, by the end of a stint, the tyres had deteriorated more than the victorious Ford, which had opted for an additional pit stop. With 20 minutes left on the clock, Pilet was able to maintain the lead, but fell back due to lack of grip. In the final few minutes, Bamber could no longer keep the No. 67 Ford at bay. still holds a 24-point lead in the manufacturers’ championship. Bamber/Vanthoor have extended their lead in the drivers’ championship, with Pilet/Tandy still on second.

The GTD class delivered suspense to the flag. The 911 GT3 R run by Pfaff Motorsports had taken up the race from fifth on the gird. Start driver Zacharie Robichon (Canada) gained one position during his stint, with Young Professional Dennis Olsen following up with an inspired drive. The Norwegian systematically worked his way up the field to second place. In the final two laps, he made repeated attempts to get past the leading Acura. He finally succeeded and won the class by a slim 0.01-second margin. The identical 500+hp car fielded by Park Place Motorsports and driven by works driver Patrick Long (USA) and Germany’s Marco Seefried reached the flag in fourth place. Directly behind them, Young Professional Matt Campbell (Australia) and his American teammate Anthony Imperato crossed the finish line in the car campaigned by Wright Motorsports.

Steffen Höllwarth (Programme Manager IMSA SportsCar Championship): “That was quite literally a hot contest. We opted for a different strategy than Ford. The difference was minimal over the total distance, but unfortunately we lost out this time. Congratulations to the winner for a clever performance. Second place for our number 912 car means we’ve managed to maintain our lead in the manufacturers’ championship and further extend our top spot in the drivers’ championship. All things considered, we’re pleased. Congratulations to the customer team Pfaff Motorsports on their maiden win in the GTD class. It was fun to watch the gripping duel for victory.”

Earl Bamber ( 911 RSR #912): “Ford gambled with three pit stops and won this time. I can only congratulate them. We’re satisfied with second place, because this position earns us critical points towards the championship. The race was fantastic, on the whole. There were fierce fights from start to finish, with several changes at the front and spectators were treated to a great show.”

Laurens Vanthoor ( 911 RSR #912): “Of course you’re always wiser in hindsight. Had we adopted a different strategy perhaps we could have won. Still, our focus is on the championship and for this reason we didn’t want to take any tactical risks. Based on this, we’ve achieved the maximum. We still lead all the classifications, and that’s the most important thing.”

Patrick Pilet ( 911 RSR #911): “Ford had a slightly better strategy today. It was difficult for us to maintain the high pace over the long stints that would have been necessary to win. is leading all of the championship categories at the moment. With this in mind, it was a successful weekend.”

Nick Tandy ( 911 RSR #911): “Every fan would have loved watching this race. It was motor racing at its best. At times we were in the lead with our number 911 car – still we’re satisfied with fourth. earned a lot of points again from this race. The championship continues. We’ll produce better results again.”

Dennis Olsen ( 911 GT3 R #9): “What an awesome race! I took over the car in fourth place and fought my way to the front. Our 911 GT3 R was fast over the entire event. Towards the end, the tyres were pretty worn, but I still managed to make the decisive move in the battle for first place. It was close, tough and successful – just the way I like it.”

Zacharie Robichon ( 911 GT3 R #9): “It was sensational how Dennis fought for the lead shortly before the end and defended it in the fierce duel to the flag. At long last, we’ve secured the first victory for Pfaff Motorsports. The entire team has been working hard for months to at least claim a podium spot. Something always hampered us, but not this time – we even finished on the top podium step. This achievement means a great deal to me.”