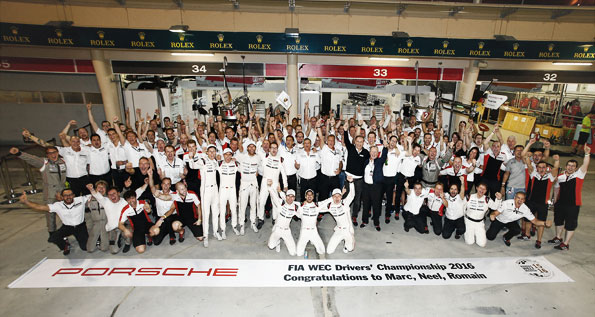 Stuttgart. At the six-hour race in Bahrain the trio of Romain Dumas (FR), Neel Jani (CH) and Marc Lieb (DE) secured the drivers' title in the FIA World Endurance Championship (WEC). The 2016 Le Mans winners finished sixth in the final round of the WEC. In the 2016 season, Dumas/Jani/Lieb have taken race wins in Silverstone and Le Mans.

Dumas/Jani/Lieb have shared a 919 Hybrid for the third consecutive season. From 2014 up until today they have set milestones, experienced highs and mastered lows. In 2014 they took the first three pole positions for the successful innovative Le Mans prototype. At the finale of the debut season, Brazil in 2014, they achieved the 919's maiden race victory to come third in the 2014 drivers' world championship. Again in 2015 the tally was three pole positions and one race win, as well as third place in the championship. Their race win in the breath-taking 2015 season finale in Bahrain enabled 's sister crew to become the drivers' world champions.

Oliver Blume, Chairman of the Board of AG, said: "This is a great season end for and a huge success for Romain Dumas, Mark Lieb and Neel Jani! My congratulations are from the depth of my heart. After these three were able to win Le Mans in June and the LMP1 team successfully defended the manufacturers' world championship in Shanghai, now taking the drivers' title as well is the icing on the cake of what was a demanding WEC season. After 2015, has now managed to take all the titles again. I'm very proud of the effort of every single person in the team. Respect!"

Quotes from the World Champions:

Romain Dumas (38): "For sure it cannot get better than ending the season as a world champion. This is what you dream of at the beginning of the year. I think a lot of this success comes from great teammates and a great team with excellent engineers. Everybody works hard. Even if we didn't always have the results we wanted, we still did a good job. We were constantly there, and this is also important in endurance racing."

Neel Jani (32): "Le Mans and the world title - this was really an incredible year that I will never forget. There is nothing better than winning both in one season. After Le Mans, we struggled a bit, but at the end we did it. And that is everything that counts."

Marc Lieb (36): "It was a difficult year. After our win in Silverstone and our dramatic victory in Le Mans - which was vital for our championship hopes - we experienced a lot of bad luck. We didn't manage any more wins, but instead had to settle for collecting points as best as we possibly could. That's why it is especially sweet to walk away with the title. Again has won virtually everything this year: the Le Mans 24 hours, the Manufacturers' Championship and the drivers' title. It is a good feeling that we were able to contribute to these successes. As a Stuttgart native that makes me especially proud. To do it with is a dream that has come true today."

Romain Dumas...
… can never get enough. A full season in the FIA World Endurance Championship as a works driver, including the 24 Hours of Le Mans, is simply not enough for the Frenchman. In between he fights his way through the Dakar Rally, tackles rounds of the World or European Rally Championship. In 2014 and again in 2016 he clinched the overall win at the famous Pikes Peak hill climb in Colorado (USA) in a prototype. "I blow all the money I make as a works driver on my private events," admitted the man from Alès in the south of the French Cevennes.

What else could he have become but a racing driver? He grew up with . His father drove a in the European Hill Climb championships. "When I was a little boy, my father sat me in a 962 Le Mans racing car. He closed the door and I thought: Wow, is this an aeroplane?" Like father, like son: Romain and his partner Elysia welcomed little Gabin to their family on 09.11.2013 and Romain's passion is being passed on to his little son. In one of Romain's photos, the youngster stands on the driver's seat of a 911 race car clutching the steering wheel.

Romain Dumas has clocked up eight overall wins at 24-hour races, the latest one being this year's Le Mans success with the 919 Hybrid. In 2010 he won Le Mans in an Audi together with Timo Bernhard and Mike Rockenfeller. He has won four 24-hour races at the Nürburgring-Nordschleife and two at the Spa circuit with . Now he is world champion for the first time.

Romain calls Le Mans his second home. He won a young talent competition here at the age of 16 - and stayed on. He went to school in Le Mans, made new friends, found sponsors and passed his driving test. Every year since then he has been collecting his racing licence from the Automobile Club de l'Ouest (ACO), the organiser of the 24-hour race. Le Mans is always different, always dramatic. This is where the Mediterranean character meets the Atlantic low pressure trough. It tends to rain heavily and persistently at the 24-hour race. Dumas knows every inch of it. 2016 was his 16th time there. "Le Mans is always going to be the greatest," he said. "Yes, you have to be fast. But you also have to be a team player, careful with the car, and you need the best team. If just one of these aspects is missing, it's not going to work."

Neel Jani...
… believes in karma. He is convinced that in 2016 he got back what he had given before. The Swiss driver with Indian roots lives up to the image of what a race car driver used to be - more bon vivant than robot, more casual than driven. At least that's what he's like outside the cockpit.

Heading out on weekends in a has always been his passion. "I have wonderful childhood memories," said Jani. "On Sundays my sister Reena and I would climb onto the back seat of my father's 911 RS 2.7 and he would take us out for a drive. These trips were real highlights for us. Unfortunately later we had to sell the car, because my racing was so expensive."

Neel Jani moved from Formula Renault, GP2 and the A1GP series to Formula One. In 2004 he tested for Red Bull Racing for the first time and in 2006 he was the third driver in the sister team, Scuderia Toro Rosso. He took part in testing and raced in the American Champ Car series as well as the A1GP series. In 2008 he was a guest starter in the Supercup. "Unfortunately I did not get to finish the race," he recalled, "but I got to drive a 911 GT3 RS for a fortnight beforehand. That was quite something for me as a 24-year-old. The car has so much power and the steering is so precise - an impressive performance." He likes precision and calculation. The question as to what he would have done for a living if he hadn't become a racing driver yields an unexpected answer: "An accountant. I like numbers."

In 2009 he started in Le Mans for the first time and since then has done so every year - including 2013 with Rebellion in the LMP1 class. In 2011 he won the Le Mans Series with the Swiss team, and in 2012 he narrowly missed the Le Mans podium when he came in fourth. In 2012 and 2013 he took victory in the ten-hour race in Road Atlanta, better known as "Petit Le Mans". Since June 2013 he has been a works driver. "It was an outstanding opportunity, being involved in the LMP1 programme from the very start," he said. "The level of technology and drivers in the WEC is world class, and when I think , I think racing cars. Everything fits together."

Does he miss Formula One? "Not at all, because things always work out as they should. I'm happy to have good memories." He married the most beautiful of those: Lauren from Indianapolis. Obviously, good karma can lead to good things even if you are only involved in practice on a Friday during a Grand Prix weekend and have the rest of the time off.

Marc Lieb...
… is the driver trio's insistent analyst. At the age of 20 the Stuttgart native won the Junior driver selection. Since then he has been celebrating successes around the world, including six overall wins in 24-hour races: four times on the Nürburgring, once in Spa, in 2016 in Le Mans. That day in June, a life's dream came true for him. Since 2003 he has been racing in Le Mans and has enjoyed a string of GT class victories. Since the 2014 season he has competed in the top category LMP1 with . Now he is a world champion.

Marc's family name translates as 'endearing' and this is how he comes across. Racing at exotic locations around the globe has never changed his down-to-earth attitude. He wants to pass on to his two sons what he has experienced. With his father, a qualified car mechanic at , they would travel to go-kart tracks in their VW van. Later father and son would get the last milliseconds out of battered single-seater racers. A more modern car was simply not an option, and neither was any major damage to the car. He learned to take care of the material. But he still had to be fast. Can there be a better training for an endurance driver?

After being selected as a Junior, he promptly won the Cup Germany and was promoted to works driver. But Marc Lieb wanted more strings to his bow. He enrolled at the Esslingen technical college to study automotive engineering. After seven semesters and a thesis on differential locks, he earned his degree as an automotive engineer. While he was studying, he won international GT2 titles and took victories on the Nürburgring-Nordschleife. He married, and the first of his two sons was born. Marc Lieb's life seems to be a string of contradictions. The colourful and glamorous world of racing in the USA on the one hand and the return to his young family back home on the other. His passionate, competitive spirit as a driver versus sober analysis as an engineer. The combination of theoretical knowledge and practical vehicle control release a fascinating potential for the sports car manufacturer .

After graduating, he worked part-time in the Performance Department. Two of the vehicles he has been involved with are the 911 GT3 R Hybrid and the 918 Spyder. In 2013 he set a track record on the Nürburgring-Nordschleife with the super sports car - under seven minutes in a production-spec vehicle. Also the LMP1 programme fascinates him from both, the racing and the engineering perspective: "The speed of development is amazing, the young engineers are passionate. Whenever we drivers question something, they'll come up with a solution."