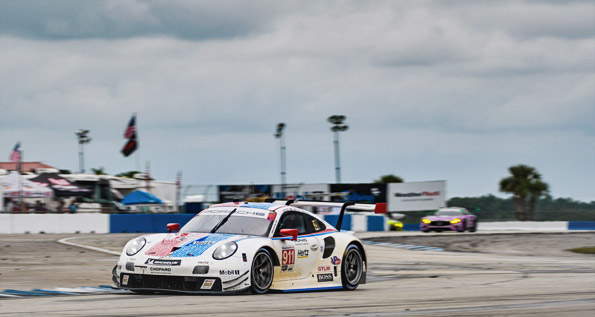 Stuttgart. has notched up yet another victory at the “Super Sebring” race weekend. Nick Tandy (Great Britain) and his French teammates Patrick Pilet and Frédéric Makowiecki took the flag in first place in the 911 RSR at the twelve-hour race of the IMSA Weathertech SportsCar Championship. With this success, the trio in the No. 911 car have not only repeated their win from last year, but also rounded off an extremely successful weekend for . A day earlier, the ca. 510 hp racing car from Weissach had won both GTE classes at the 1,000-mile race of the Sports Car World Endurance Championship WEC. The No. 912 sister car driven by Earl Bamber (New Zealand), Laurens Vanthoor (Belgium) and Mathieu Jaminet (France) finished the thrilling long-distance classic in the USA on fifth place.

Early on in the race, lack of grip in the heavy rain initially threw both 911 RSR down the field. As conditions improved at the half-way point of the race, the experienced GT Team utilised every last strength of the car. Thanks to great tactics, top-class driving and flawless teamwork, the No. 911 car fought its way back into the lead. In a gripping finale, Nick Tandy fended off all attacks and crossed the finish line after twelve hours with a 1.951-second lead. Tandy, Pilet and Makowiecki are the first driver trio to win the IMSA race at Sebring twice in a row. Thanks to their victory, the No. 911 crew now ranks first in the overall classification. The No. 912 line-up fell back two laps in the early phase. Putting in a spirited charge through the field, the Daytona podium finishers concluded the race on fifth.

In the GTD class, the 911 GT3 R fielded by the Pfaff Motorsports customer team held the lead for about half of the race distance. The rewards for this strong performance from development driver Lars Kern (Germany) and his Canadian teammates Scott Hargrove and Zacharie Robichon were few. While switching out a faulty sensor in the 500 hp GT3 racer from Weissach, the squad lost crucial ground and reached the flag after twelve hours in tenth. Prior to this, the trio had held a comfortable lead over long stretches. In the identical vehicle run by Park Place Motorsports, factory driver Patrick Long (USA) and his compatriots Nicholas Boulle and Patrick Lindsey narrowly missed out on climbing the podium with sixth place.

Round three of the IMSA Weathertech SportsCar Championship will be contested on 13 April in Long Beach (USA).

Fritz Enzinger (Vice President Motorsport): “I’ve been in motorsport for a long time, but I’ve never experienced anything like this. Within 48 hours we won a 1,000-mile race and a twelve-hour race with our factory teams at one venue. That’s phenomenal. I was impressed by how focussed every single person worked. That’s what sets apart. And we mustn’t forget the successful performances from our customer teams. It was one of the best motor racing weekends I’ve ever experienced – just brilliant.”

Pascal Zurlinden (Director GT Factory Motorsport): “Perhaps we should rename the event the “ Super Sebring” race weekend. Three pole positions, three victories – what more could you want. Our team did everything right. Ultimately, when things went down to the wire, we were there. The key moment was when we reclaimed the lead after a perfectly timed pit stop. Our strategy was to wait and strike at the right moment. Now it’s time to celebrate!”

Patrick Pilet ( 911 RSR #911): “It somehow feels unreal. We started from pole position, and then we were running last, and now we celebrate our second Sebring victory in a row – unbelievable! Our team is simply something very special. We never gave up, we always believed that we had a chance and now we’re standing here as winners. It’s indescribable.”

Nick Tandy ( 911 RSR #911): “It was a totally crazy race that one rarely experiences. We got the lot: extremely wet at the beginning, a dry track, then predicted rain, which didn’t eventuate. We started from pole, then quickly fell back, only to end up in the lead again. You only get such things at a long-distance race. And this is the precisely the kind of discipline that excels at. Never give up, always push and then pull out all stops at the right moment. That’s how it’s done.”

Frédéric Makowiecki ( 911 RSR #911): “I’m lost for words. We had major problems in the rain early on in the race, but we battled our way forward again in an incredible manner. Like last year, it was a perfect team effort. With such successes, it really becomes clear just how important it is for the entire squad to work perfectly.”

Earl Bamber ( 911 RSR #912): “Initially, both 911 RSR lost ground in the rain. But we got faster later on. Unfortunately the timing of a pit stop didn’t work out for us. While our sister car regained the lead, we were still a lap down. We fought hard, but we couldn’t really do much. Congratulations to our colleagues. It was a dream weekend for .”

Laurens Vanthoor ( 911 RSR #912): “Unfortunately we lost too much time in the rainy start phase. Otherwise we could have fought for victory. Our car was incredibly good, especially on slicks in the final phase. For me personally, I’m a bit disappointed. But it is outweighed by the joy of an incredibly successful weekend for .”

Mathieu Jaminet ( 911 RSR #912): “Of course I’d have loved to win, so I regard this weekend with mixed feelings. From ’s point of view, however, it was a dream. From our perspective, that of the number 912 car, it’s kind of sad. We could have won, too, but it didn’t work out this time. Still, we’re delighted for our teammates.”