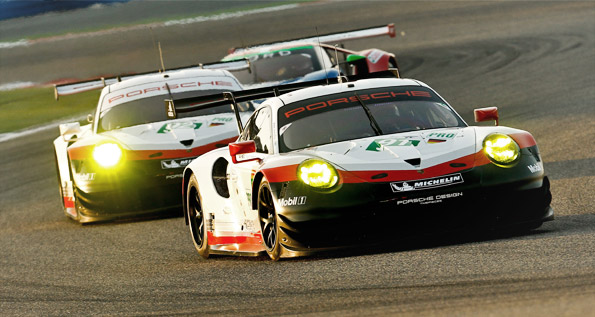 Stuttgart. At the six-hour race on the Bahrain International Circuit, Richard Lietz (Austria) and Frédéric Makowiecki (France) secured second place in the Sports Car World Endurance Championship WEC. With the 510 hp 911 RSR, they finished fourth in the GTE-Pro class at the season finale in the desert. For Michael Christensen (Denmark) and Kévin Estre (France), who were on course for victory after running at times in the lead, all hopes were dashed after they became entangled in a collision caused by another competitor.

On the 5.407-kilometre Grand Prix circuit close to Manama, the capital of the Persian Gulf kingdom, the two 911 RSR made a somewhat cautious start to the last race of the year. Only when the engineers sent the #91 vehicle with Kévin Estre at the wheel back out on the racetrack with a new tyre strategy after the first pit stop did the 911 RSR demonstrate the desired performance. Pulling out all stops, the Frenchman overtook two Ferraris in a spectacular overtaking manoeuvre and worked his way up the field one position after the other. After two hours he had snatched the lead. His teammate Michael Christensen rejoined the race in third place, moved up into second and set his sights on the frontrunner. However, after half the distance, an LMP1 Toyota squeezed past the 911 RSR in the blind spot and roughly shunted the into retirement. All prospects of the new GT spearhead from Weissach claiming its maiden victory in the world championship were destroyed.

As spectators in the pits, Michael Christensen and Kévin Estre had to watch how the fight for victory played out without them. However, their team colleagues Richard Lietz and Frédéric Makowiecki jumped into the breach for them. After a weak start which saw the two at times running at the back of the GTE-Pro field, the title aspirants in the #91 911 RSR gathered momentum. With 90 minutes left to the flag, Frédéric Makowiecki had fought his way through to sit second behind the leading Ferrari. However, in the last hour of racing, he was unable to maintain this level of performance. Despite his determined efforts to defend his position, he ultimately had to let the second Ferrari and then a Ford pass him. He didn’t, however, relinquish the runner-up spot in the drivers’ classification of the world championship as reward for the strong performance of the entire team this season and particularly at this gripping final race of the season.

For the customer team, Dempsey Proton Racing, the Junior Matteo Cairoli (Italy), Christian Ried and Marvin Dienst (both Germany) concluded the season on second place in the FIA World Endurance Trophy. In Bahrain they took the flag as fourth in the 2015-spec 911 RSR, with which they had won this year’s GTE-Am class races at the Nürburgring and in Mexico.

Dr. Frank-Steffen Walliser, Vice President Motorsport and GT Cars: “We were only narrowly beaten in the debut season of the 911 RSR. Like the last race of the season, all the other races in the GTE-Pro class were extremely competitive. Spectators were treated to truly spectacular racing. Unfortunately, our number 92 car was often hit by competitors. In 2018 we’ll return with the goal of winning the world championship. Congratulations to our Dempsey Proton Racing customer squad for securing second place in the drivers’ classification of the FIA Endurance Trophy.”

Richard Lietz (911 RSR #91): “We did a lot of things right in this first season with the new 911 RSR. Ultimately, we were in a position to fight for the drivers’ world championship. In today’s race, we tried several courageous measures and learned a lot, albeit a little too late. Nevertheless, I take my hat off to the team for being so brave. We were beaten by a very strong opponent. For the 2018/2019 season, we now have to prepare even more intensively in order to fight for victories and the world championship title.”

Frédéric Makowiecki (911 RSR #91): “Congratulations to the whole team for a great season. We faced very strong opposition with a completely new car and with big expectations. And in this first year we’ve achieved several commendable successes and learned a great deal. But this season always underlined that we have to keep pushing.”

Michael Christensen (911 RSR #92): “We fell behind in the first stint. Our engineers then opted for a different strategy – and Kevin drove an incredible stint. It was fantastic to watch how he fought his way to the top. I rejoined the race in third place, overtook the first Ferrari and had a collision with the Toyota. He came out of nowhere, completely unexpectedly, I couldn’t see him in the blind spot and so I had no chance to avoid the collision. Obviously, this is a disappointing way to finish the season.”

Kévin Estre (911 RSR #92): “We struggled initially. The first stint wasn’t good. Our engineers sent me back out onto the track with a modified strategy and that worked brilliantly. I managed to come from the very back of the field to first place. Michael also drove a strong second stint, but he was hit by the Toyota, unfortunately. The LMP1 guys sometimes try to overtake off the racing line and no one can anticipate that. Michael hadn’t expected him at that point. Unfortunately, that was the end of our race.”

Complete results of all WEC race can be found on http://fiawec.alkamelsystems.com
Current points standings on http://www.fiawec.com/en/season/result/4116