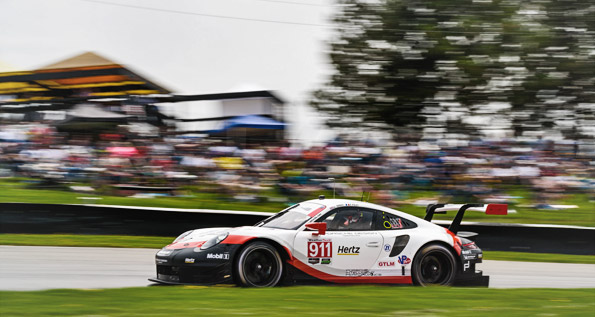 Stuttgart. The GT Team tackles round four of the IMSA WeatherTech SportsCar Championship in Lexington (Ohio, USA) as the leader of the manufacturers’ and drivers’ championship. After scoring wins at the traditional North American racetracks of Sebring and Long Beach, the sports car manufacturer would now like to further extend its lead at the race on the Mid-Ohio Sports Car Course. After the long-distance races at Daytona and Sebring followed by the Long Beach sprint race, round four of the season is the first event of the year that will run over the standard 2 hours and 40 minutes.

The race
The Mid-Ohio Sports Car Course is located about 100 kilometres south of the shores of Lake Erie, where most of North America’s automotive industry is based. The 3.364-kilometre circuit was opened in 1962 and has hosted sports car races ever since. In 2006 and 2007, clinched two overall victories with the RS Spyder on the natural terrain road course featuring many surface changes. Last year, Earl Bamber (New Zealand) and Laurens Vanthoor (Belgium) won the fiercely competitive GTLM class here. Due to its northern location – around the same latitude as New York – changeable weather conditions should be expected in early May.

The drivers
The winners of the Sebring race Patrick Pilet (France) and Nick Tandy (Great Britain) share the No. 911 911 RSR. The pair currently ranks second in the drivers’ classification. The sister car driven by Bamber and Vanthoor holds an even better position. The New Zealander and the Belgian lead the championship ahead of their factory driver colleagues after winning the Long Beach street race. While the GTD class was absent at the previous round on the Pacific coast, the 911 GT3 R now returns to the competition. The customer teams Pfaff Motorsports (No. 9) and Park Place Motorsports (No. 73) each field one of the 500+hp GT3 vehicles from Weissach.

The vehicles
For its third racing season in North America, the 911 RSR has undergone further optimisation primarily in the setup. Depending on the size of the restrictor, the engine, which is positioned in front of the rear axle, puts out around 375 kW (510 hp). The large rear diffuser combined with a top-mounted rear wing provides aerodynamic efficiency and significant downforce. The 911 GT3 R was newly developed for the 2019 season. Improvements in the areas of aerodynamics and kinematics were systematically implemented from the insights garnered from the many race outings of its predecessor. The six-cylinder engine in the rear of the GT3 customer racer produces over 368 kW (500 hp).

The schedule
The race takes off on Sunday, 5 May, at 13:40 hrs local time (19:40 hrs CEST) and can be viewed live outside the USA and Canada on www.imsa.com.

Pascal Zurlinden (Directorr GT Factory Motorsport): “Of course we want to continue our good run from the past weeks. The competition among the manufacturers in the GTLM class is fierce. We recently gave an impressive demonstration of just how strong the combination of our squads and the 911 RSR is. We were victorious over long distances and at the sprint race. Now we’re travelling to Mid-Ohio as last year’s winners – and that gives us even more confidence. We aim to maintain our front spot in the championship and hopefully extend our lead.”

Steffen Höllwarth (Programme Manager IMSA SportsCar Championship): “After our wins at Sebring and Long Beach, we’re travelling to the Mid-Ohio race feeling very motivated. This racetrack once again throws new challenges at us. The course is a real mixed bag with many tight turns and longer straights. It requires mechanic grip and the setup must be a good compromise between a lot of downforce and enough top speed. Our victory last year underlined that the 911 RSR is well suited to the track. Although we’ve been victorious at the previous races, we’ve also always had the potential to bring home podium results with both cars. We've never managed it before. I hope we can finally achieve this in Mid-Ohio.”

Sebastian Golz (Project Manager 911 GT3 R): “The Mid-Ohio track is not only rich in tradition but is also really challenging. The layout allows different racing lines in some places, but the lap-time differences are not significant. The key to success is a strong qualifying result because this narrow circuit doesn’t offer many overtaking opportunities. If you start up the front you can control the race. We want our customer teams’ two 911 GT3 R cars to be in this promising position.”

Patrick Pilet ( 911 RSR #911): “The Mid-Ohio Sports Car Course has a very special character. It has lots of different types of asphalt and the transition between them can often be tricky. We were very fast there last year with both cars. We qualified on the front grid row and our colleagues in the sister car scored victory in the race. I’m confident that we’ll be strong again this year.”

Nick Tandy ( 911 RSR #911): “Last year was my first time on this racetrack – and I was instantly impressed. Mid-Ohio is a truly classic circuit for sports cars in a typical American style. I really like that. The track surface changes several times per lap, and so does the grip. We have to work intensively on the setup and keep an eye on the weather at all times. It rains quite often in early May around the Lexington area. We have to be prepared for it.”

Earl Bamber ( 911 RSR #912): “There’s definitely no lack of motivation and excitement. We’re tackling Mid-Ohio as last year’s winners and have won the previous round at Long Beach. We now bring this momentum and these pleasing successes to the upcoming race. It’ll be important to notch up another victory there, because afterwards the IMSA series will take a long break in the lead-up to the Le Mans 24-hour race. We’re determined to travel to France as the series leaders and then continue the season in North America as the frontrunners.”

Laurens Vanthoor ( 911 RSR #912): “If you’ve won last year with the same car on the same track then obviously it’s wonderful to return to the venue. For us in the number 912 911 RSR there’s also the lingering pleasure of our Long Beach victory. Still, the Mid-Ohio race will be no walk in the park. The racetrack is challenging because many passages lack decent grip. We have to do our utmost to be at the front again.”