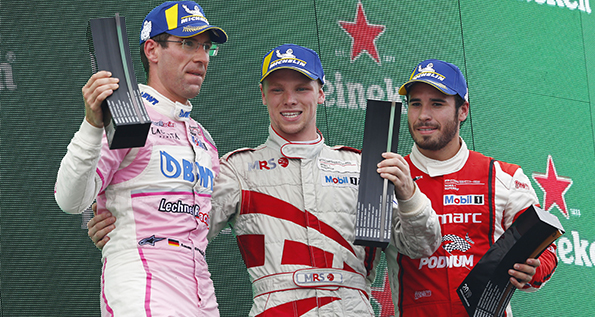 Great celebrations for Larry ten Voorde (MRS GT-Racing): The Dutchman claimed his first victory in the Mobil 1 Supercup at the Autodromo Nazionale Monza in Italy. “I got goose bumps when I stood the podium and heard the Dutch national anthem playing. My start was good but I also benefited slightly from the collision in the first corner,” said ten Voorde. The youngster is the fifth driver to win a round so far this season. Joining him on the podium at Monza after round eight on Sunday was Michael Ammermüller (D/BWT Lechner Racing) and Joey Mawson (AUS/Team Australia). The championship title will now be decided at the finale in Mexico City. Forty points are still up for grabs at the doubleheader event, where Ammermüller (BWT Lechner Racing, 110 points), ten Voorde (96 points) as well as Junior Julien Andlauer (F/BWT Lechner Racing, 92 points) and Ayhancan Güven (TR/martinet by ALMÉRAS, 88 points) still hold chances to claim the crown.

The race on the tradition-steeped 5.793 kilometre circuit turned turbulent right from the outset. Pole-sitter and Junior Jaxon Evans (NZ/Fach Auto Tech) led the 32-strong field of 911 GT3 Cup racers through the first chicane, where Evans and Güven swapped paint. Evans lost several positions, while Güven took the lead. Although the young Turkish driver defended his front spot until the end of the 15-lap race, he was subsequently handed a five-second penalty for the collision with Evans. Thus, Güven’s closest rival ten Voorde inherited the top position in the 485 hp 911 and celebrated his maiden victory in the international one-make cup. Ammermüller followed 0.893 seconds behind the MRS driver and now sits at the top of the points table as the new championship leader. “The key factor was that I got through the first corner unscathed. Afterward I waited for Joey Mawson to make a mistake. My patience paid off,” said Ammermüller.

The rookie Mawson celebrated his premiere on the Supercup podium. The Australian fended Ammermüller off for ten of the 15 laps in the Royal Park, before the seasoned Supercup specialist overtook him. “That was a fantastic race with a super result for me. Unfortunately, a minor error cost me second place. Still, I’m delighted to make it to the podium,” said Mawson. Detlev von Platen, Member of the Board for Sales and Marketing, and Michael Dreiser, Director Motorsport Sales, presented the trophies at the award ceremony.

Fourth place went to Mikkel Pedersen (DK/Dinamic Motorsport). Due to the penalty, Güven was relegated to fifth place, with Junior Evans on sixth. “My start wasn’t ideal, but I was in the lead until Ayhancan Güven’s car and mine touched. That was of course the key moment. Ultimately, I still managed to finish on sixth,” stated the New Zealander. Following Evans over the line were Dylan Pereira (L/Momo Megatron Lechner Racing) and Al Faisal Al Zubair (OM/Lechner Racing Middle East). Junior Andlauer retired before the end of the race. The 20-year-old slid off the track in lap three and badly damaged his vehicle. “I was going really well and managed to progress from 13th up to fifth place, which makes my retirement even more upsetting,” said Andlauer.

Roar Lindland (N/pierre martinet by ALMÉRAS) achieved his eighth ProAm class win of the season, with Philipp Sager (A/Dinamic Motorsport) and Clement Mateu (F/pierre martinet by ALMÉRAS) occupying the other podium spots. Competing for the Dinamic Motorsport squad with its headquarters in Reggio Emilia, Gianmarco Quaresmini (Brescia) and Alberto Cerqui (Preseglie) raced in front of home crowds this weekend. Drivers from 21 countries contested round eight of the season – making it the most diverse line-up in the history of the racing series. For the season finale, the Mobil 1 Supercup travels to Mexico City from 25 to 27 October. The Autódromo Hermanos Rodríguez hosts the last two rounds of the international one-make cup for third time. In the past two years, Ammermüller was crowned the Supercup champion there.