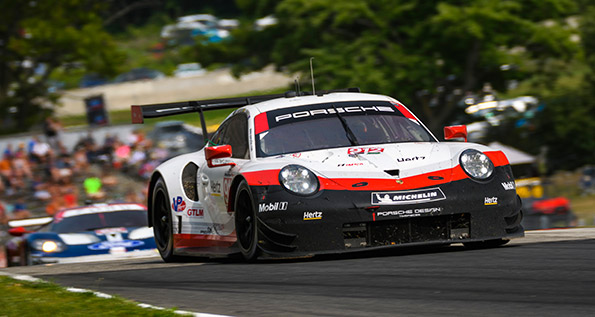 At round eight of the IMSA SportsCar Championship on Sunday, the GT Team secured positions four and five. On the Road America racetrack in the US state of Wisconsin, New Zealander Earl Bamber and Laurens Vanthoor from Belgium scored fourth place in the #912 911 RSR after a turbulent race. The sister car with drivers Nick Tandy (Great Britain) and Patrick Pilet (France) took the flag in fifth place. In the GTD class, works driver Patrick Long (USA) and Selected Driver Christina Nielsen from Denmark (both Wright Motorsports) celebrated their first win together in the 911 GT3 R.

For fans, the race at Elkhart Lake turned into an emotional rollercoaster ride. Grid positions four and eight initially dampened expectations, however thanks to a perfect strategy during the early stage of the race, start driver Tandy moved into the lead of the GTLM field. The UK race driver remained at the front until an hour before the finish. After a close duel with a pursuing vehicle, the #911 car was handed a drive-through penalty. At the end of the 2:40-hour race, Tandy ultimately reached the finish line in position five.

Vanthoor and Bamber also treated spectators to some gripping race action. Taking off from fourth on the grid, Vanthoor fell back as far as eighth place with the #912 car over the course of the race. However, despite a number of caution phases, the two worked their way up through the GTLM ranks and missed out on a podium spot.

Long and Nielsen put in a flawless drive in their 911 GT3 R. The pair had already posted pole position during Saturday’s qualifying on the 6.515-kilometre circuit. With an immaculate drive on Sunday, they achieved their maiden victory in the class for GTD vehicles. This marks the 542nd win in the 49-year history of IMSA. Competing for Park Place Motorsports, Patrick Lindsey and factory driver Jörg Bergmeister were thrown out of contention after contact with the track barriers.

Round nine of IMSA SportsCar Championship will be held at the Virginia Raceway from 17-19 August.

Pascal Zurlinden, Director GT Factory Motorsport: “That was a tough race for the team. We knew that the track characteristics with its long straights would make it difficult for us here. We really struggled in the qualifying, but we made up for this in the race with a perfect strategy and optimal pit stops for our #911 car. But then we were handed a drive-through penalty and we went backwards from that point on. In two weeks we’ll be in Virginia, where we’ll attack again. Congratulations to our customer team Wright Motorsports on winning the GTD class.”

Earl Bamber ( 911 RSR #912): “We ended up on fourth place. We simply couldn’t do any more. To be honest, we were lucky that the others experienced problems. When we arrived here our expectations weren’t that high, because it’s a tricky circuit for our car and tyres. We’ve had several strong performances that we haven’t managed to turn into victories. Now let’s see how it goes in Virginia.”

Laurens Vanthoor ( 911 RSR #912): “All in all, it was a difficult race. We encountered some critical situations with other vehicles out on the track. That’s what I call tough racing. Fourth in qualifying was okay, but unfortunately we lacked enough speed in the race.”

Nick Tandy ( 911 RSR #911): “In terms of strategy we were very well sorted. And everything else worked perfectly. I was just a little surprised by the penalty from the race director. Of course you have to accept such a drive-through penalty, which is what we did, but it meant we had to bury our dreams of a top podium finish.”

Patrick Pilet ( 911 RSR #911): “The team did a great job. The strategy was definitely the right one and our pit stops were also extremely good today. Then out of the blue we received a drive-through penalty for contact with another vehicle. That’s frustrating. We hope it’ll be better at the next race in Virginia.”