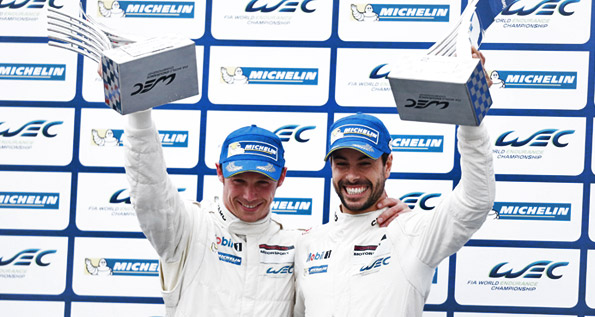 Stuttgart. A successful conclusion to the Sports Car World Endurance Championship WEC for Team Manthey: With a strong performance at the gripping six-hour race in Sao Paulo, the French works drivers Frédéric Makowiecki and Patrick Pilet scored second in the fiercely competitive GTE-Pro class at the wheel of their 911 RSR. With this, the pair notched up another podium result with the 470 hp GT racer from Weissach to add to the two double victories at Silverstone and Shanghai. In the manufacturers’ championship, secured runner-up honours.

Witnessed by 50,000 spectators at the Autodromo José Carlos Pace, the number 92 911 RSR got away cleanly amongst the front-runners in temperatures reaching 28 degrees Celsius. After a good qualifying performance, Frédéric Makowiecki took up the last race of the season from the first grid row and treated the Brazilian fans to some breathtaking fights for positions and spectacular overtaking manoeuvres. His teammate Patrick Pilet snatched the lead for the first time early in the third hour. With an hour to the flag, Makowiecki was running at the front of the GT field before pulling into the pits for the last refuelling stop and driver change. As dusk turned to darkness, Patrick Pilet returned to the track in third and launched a furious pursuit. But after pushing his way up to second place, a safety car phase which lasted until the end of the race robbed him of the chance of victory. This caution phase was triggered by a serious accident in which the LMP1 pilot Mark Webber was involved.

The season finale proved not as successful for Jörg Bergmeister and Richard Lietz in the second 911 RSR campaigned by the Manthey squad. After a difficult qualifying which yielded them the fourth grid spot, they were unable to fight for victory and were also hampered by a slow puncture and a stop-and-go penalty after a collision. The pair eventually saw the flag in sixth place.

For the 911 RSR, which is based on the seventh generation of the iconic 911 sports car, a successful season drew to a close in Sao Paulo. The promising start with a double win at the Silverstone season opener was followed up with podium placings at Spa-Francorchamps, at the Le Mans 24 Hours and Austin. In Shanghai, Team Manthey could finally celebrate their second double victory of the season. And the 911 RSR not only notched up successes in the World Endurance Championship: Prior to the start of the WEC season, the sports car campaigned by North America won two of the most prestigious long distance races – the 24 Hours at Daytona and the 12 Hours of Sebring.

Dr. Frank-Steffen Walliser, Head of Motorsport: “We had a very good strategy and could have won. Today we definitely witnessed one of the most exciting races – it was a tough battle with gripping wheel-to-wheel duels. It’s a shame that it wasn’t enough for a victory. All in all we are not satisfied with the season in which we failed to win a title. We certainly have some work to do, and we’ll tackle it, but we also expect some of the rule parameters to be adjusted.”

Patrick Pilet ( 911 RSR #92): “Obviously we’re a little disappointed. The whole team did a great job and our strategy was good. But unfortunately the caution phase threw a spanner in the works. Had the Aston pitted again that would have put us further ahead and perhaps even yielded us a victory. Still, second place is a good result and we can be proud of it. All in all it was a tough season for us. After our one-two at the first race in Silverstone we certainly had expected a little more. We never gave up and always did our utmost, but at some of the races we simply lacked the necessary performance.”

Frédéric Makowiecki ( 911 RSR #92): “It was a good race and a hard fight for victory. At the halfway mark we had a bit of bad luck with the caution phase which our opponents used for their pit stop and hardly lost any time. Other than that we were within striking distance to the front the whole time and actually in a position to win. When a season concludes with second place, it’s a good result that we can build on.”

Jörg Bergmeister ( 911 RSR #91): “That wasn’t so great. I struggled with the car today. Plus we suffered a slow puncture and the stop-and-go penalty for the collision. I viewed the situation somewhat differently than the stewards, but what can you do. The season started well for me, and Shanghai yielded another good result. The last two races, however, weren’t particularly encouraging.”

Richard Lietz ( 911 RSR #91): “We certainly didn’t deserve to finish in sixth. We were much faster, our performance was better and our effort was better than the result shows. On top of that came the bad luck of the caution phase. But that’s how it is in racing – sometimes you’re lucky, sometimes you’re not.”

Points standings after 8 of 8 races