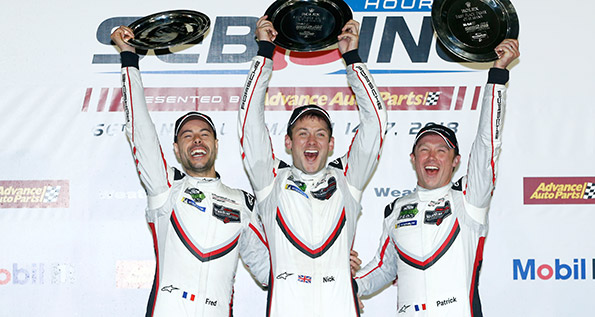 The 911 RSR has scored its first win of the IMSA SportsCar Championship season at the Sebring International Raceway in Florida. At the 12 Hours of Sebring, the oldest and toughest sports car race in the USA, Patrick Pilet (France), Nick Tandy (Great Britain) and Frédéric Makowiecki (France) won the GTLM class with the 510 hp race car from Weissach after a heart-stopping finale on Saturday. At the wheel of the second 911 RSR fielded by the GT Team, Earl Bamber (New Zealand), Laurens Vanthoor (Belgium) and Gianmaria Bruni (Italy) swept over the finish line in third place after 328 laps on the famously bumpy airfield circuit. Thus, they crowned ’s success in the race that also counts towards the North American Endurance Cup. Florida proves to be a good hunting ground for the iconic 911 sports car: Only a week ago, the 911 GT3 R won both rounds of the World Challenge season-opener on the St. Petersburg street circuit.

In glorious spring weather, a total of 43 vehicles headed off on Saturday morning into the 66th edition of the tradition-steeped race, in which has made history since 1960 as the most successful manufacturer with 18 outright victories and now 71 class wins. In the cockpit of the #912 911 RSR, Laurens Vanthoor took up the race from sixth place on the third grid row and promptly picked up two positions in the first lap. His teammate Nick Tandy, who lined up on the grid directly behind the Belgian in the second 911 RSR (#911), managed to make up three positions: An exemplary start in a hotly contested race that was interrupted in the 14th lap by the first of eleven safety car phases.

Thanks to perfect pit stops from the GT Team and a flawless performance from drivers, the 911 RSR was able to hold its own against tough competition from BMW, Chevrolet, Ferrari and Ford and settle in amongst the frontrunners. In lap 40, Laurens Vanthoor moved into the lead for the first time. After 2:30 hours, his teammate Gianmaria Bruni was running at the front of the GT field. Shortly before halftime, Nick Tandy also joined the list of frontrunners with his 911 RSR. During the second half of the race, his teammate Frédéric Makowiecki dominated the GT field for two hours, only relinquishing the lead spot when he came in for a scheduled pit stop after dark. However, the 911 RSR continued to put the leaders under pressure. Even a torn-off rear diffuser caused by a minor off-track excursion was replaced in record time, and the lost time was quickly regained.

The suspense at the Sebring International Raceway continued from the first to the last minute. Fans from all over the country were treated to plenty of gripping race action in all classes, with many fierce battles for positions and constant changes at the front. And the pilots continued to dazzle: After 10 hours and 10 minutes, in the 279th lap, Patrick Pilet took the lead for the first time in the #911 911 RSR. Nick Tandy then defended this position with an inspired drive to the flag.

Thanks to this victory, Nick Tandy, Patrick Pilet and Frédéric Makowiecki move up to second place in the driver's classification. also advances to second in the manufacturer's championship.

Round three of the IMSA SportsCar Championship is the Long Beach street race in the US state of California on 14 April.

Comments on the race
Pascal Zurlinden, Director GT Factory Motorsports: “It’s a great achievement to score two podium spots at Sebring. The secret was our consistency and the fact that we didn’t make one mistake. We may not have been the fastest over a lap, but over the distance the drivers and the entire team put in a perfect performance. Even when we had to repair the #912 car in the pits, we pulled out all stops to get the car back up the front. Today was a great day for . Thank you to all the employees at Weissach. They contributed as much to this success as our team here in Sebring.”
Patrick Pilet (911 RSR #911): “This win was missing from my collection. It was a great team effort. The pit crew didn’t make one mistake and our strategy was perfect. To celebrate this achievement with my friends Nick and Fred is incredible. After the qualifying, victory seemed a long way off. But when you’re determined to achieve something and you go for it, you can do it. This race is proof of that.”
Nick Tandy (911 RSR #911): “They say that the best victories come from the toughest races. Today was such a race. We didn’t have the slightest problem over the entire distance and that was the key to our success. My last two stints were incredibly intense, especially the duels with the Ferrari and the BMW. We switched to new tyres during the last pit stop – after that, nothing could hold us back.”
Frédéric Makowiecki (911 RSR #911): “That was one of my greatest successes. Sebring is my all-time favourite race in the USA and we knew that we’d only have a chance if we as a team didn’t make any mistakes. It was a really tough race, but that makes this victory all the more special.”
Earl Bamber (911 RSR #912): “This race was a real rollercoaster for us. A case in point is when another car blocked our pits and we lost twelve seconds and several positions. It was a banner day for . We’ve waited a long time for such a sense of achievement. Now we’ll tackle the rest of the season feeling even more motivated.”
Laurens Vanthoor (911 RSR # 912): “Victory and third place, what a great success for . The whole team has worked hard for this major race and they deserve this success.”
Gianmaria Bruni (911 RSR # 912): “I’m proud to be a part of this squad. What they’ve achieved today is hard to describe in words. It’s unbelievable how quickly the mechanics got our car back in the race after I left the circuit briefly towards the end and had to pit with a damaged diffuser.”

This is the IMSA SportsCar Championship
The IMSA SportsCar Championship is a sports car race series contested in the USA and Canada, which was run in 2014 for the first time. The series was formed from the merger of the American Le Mans Series and the Grand-Am Series. Sports prototypes and sports cars start in three different classes: GTLM (GT Le Mans), GTD (GT Daytona) and P (Prototype). The 911 RSR runs in the GTLM class, with the 911 GT3 R contesting the GTD class.