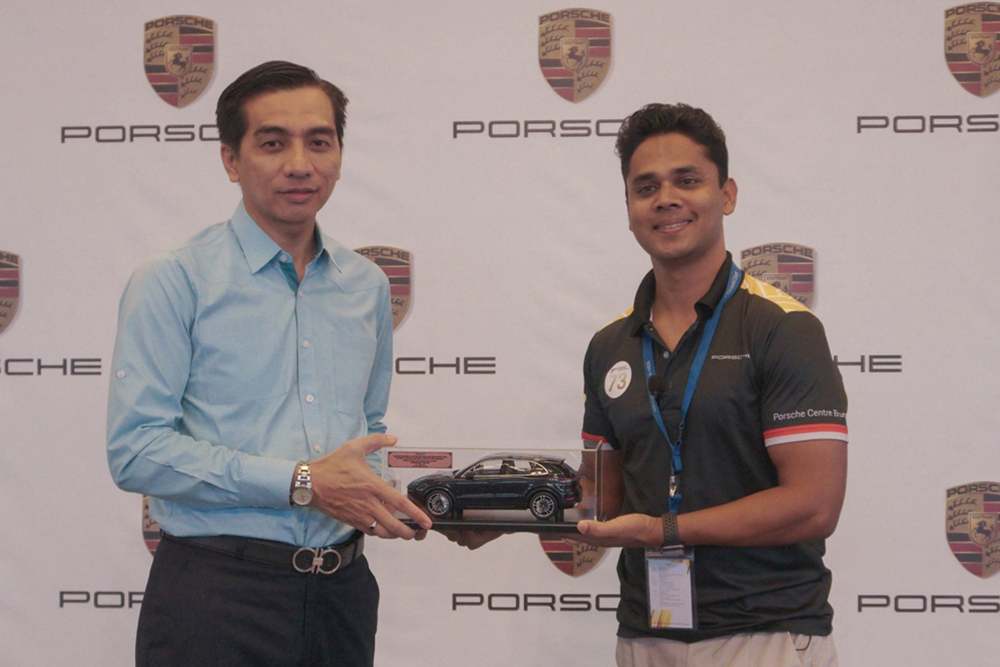 Organised by QAF Eurokars, the official importer and dealer of vehicles in Brunei, the day trip from Bandar Seri Begawan to the Belait District gathered over 30 classic and new owners that the company said is an extension of their family.

Apart from showing unity, strong support and undivided loyalty to the beloved monarch, Acting Deputy General Manager of QAF Eurokars Lahiru de Silva said the road tour was meant to combine the brand through the eras with its cultural values which are pioneering spirit, passion, sportiness and family.

The event that started as early as 7.30 am began with the road tour participants attending a safety briefing and having breakfast at the Centre in Beribi Light Industrial Area.

Despite the heavy rain filling Bandar Seri Begawan that morning, it did not dampen the participants’ spirit as they were eager to be part of the road tour with their fellow owners, friends and families.

They even wore special shirts and caps to commemorate the event, symbolising the unity of the family.

Flagging off the event was the guest of honour, Permanent Secretary (Administration, Finance and Estate) at the Ministry of Culture, Youth and Sports Pengiran Mohd Amirrizal bin Pengiran Haji Mahmud, who also took part in the road tour.

The Acting Deputy General Manager of QAF Eurokars led the convoy to several national landmarks with the largest gathering of vehicles in one place, along with five in-stock cars including the and the new is driven by staff and media members.

From the Centre, the convoy stopped by at the country’s largest mosque, Jame’ ‘Asr Hassanil Bolkiah in Kampong Kiarong, for a group photo.

The convoy later drove by the Istana Nurul Iman, the official residence of His Majesty, which is located on a leafy, riverside sprawl of hills on the banks of the Damuan River.

On their way to the Belait District, the convoy also passed by the Jerudong Park’s Crystal Arch at a roundabout, one of Brunei’s most recognisable landmarks.

With permitting weather throughout the journey on the highway to the Belait District, the convoy enjoyed the scenic and easy drive, attracting scores of onlookers as it makes its way with a line-up of some of ’s classic models like the 911 to newer models like the new .

At the final pit stop in Belait Town, the convoy gathered at the V-Plaza Hotel just by the Belait River, where the participants took another group photo with their vehicles and enjoyed lunch together. Ice-breaking activities, discussions and lucky draws were also held, allowing the participants to share their experiences.

After returning to the Centre to conclude the road tour, the participants received certificates and souvenirs to take home.