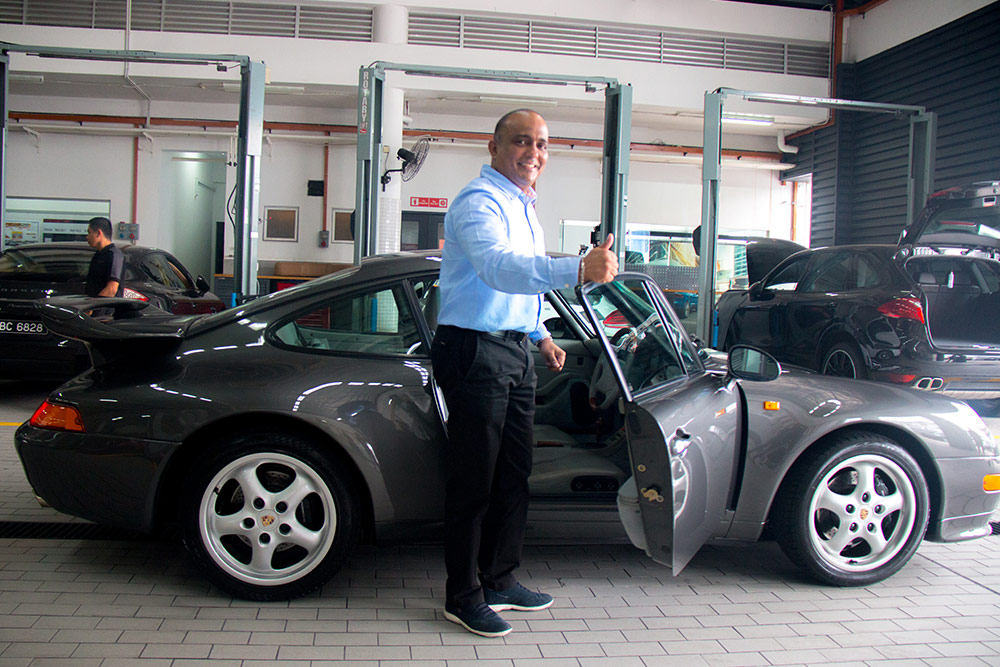 The story of a owner

When you send you cars for repairs, you’ll want to be assured that they will be restored to where they should be; especially when you’re sending them to official agents who have all the necessary parts and equipments.

Yet, when Shannan Nair heard about few years ago that Brunei’s Centre no longer service its classic line-ups, his heart was struck.

Shannan has always been an avid fan of super cars, especially when he finally obtained the 1994 911 in 2006; a car he had set his eyes on since his teenage years.

The car, however, was hardly-driven when it first got into Shannan’s hands and there were oil leaks and other issues.

“The condition was not perfect, but the excitement of owning the itself was more than anything,” he said.

“Whatever the condition it arrives, I continued to use the car; it is a used car nevertheless but how it was built, it was definitely German engineering to the very best,” he added.

While third parties can only do so much, only technicians certified by the powerhouse have the capabilities to really bring the car to its top shape.

Prior to 2015, Shannan had to depend on third parties to fix his car; who could only give him temporary fix from time to time; while they have been helpful, Shannan said they are not the best of the deal.

“What I wanted was a kind of warranty, a documented one like what a regular distributorship can do,” he said.

In 2015, Centre Brunei had a new structure. Through its new After Sales Manager Lahiru De Silva, the centre now brings back its function to service classic cars.

“So in May last year, I had the opportunity to meet up with Lahiru and his team; and I got sold into restoring my car,” he said.

“He has got the experience and the capacity; they took control of the restoration but give me regular feedbacks,” he added.

The restoration process includes rebuilding the engine due to the leakage, and to restore some of the finer details including fuel and suspension systems.

But the centre decided not to do much of painting and interior restoration, as they want to keep it original since the car was customised personally for its previous owner.

“But what touched me personally is how I was able to get detailed records of how the restoration process go; I was able to follow up with all of the phases,” he said.

“This gives me confidence. When you hand over something which is of high value, you want to make sure it is well taken care of; and that was how it felt having been involved in the whole process of restoring my beloved car,” he added.

Finally having his car restored, Shannan now rode his 993 frequently throughout his stay in Brunei. Shannan is working overseas, so he would come down to Brunei once in a while to visit his family.

Asked about his experience now, he said he was happy; happy that he was finally able to own his dream car, and then to have it restored to its rightful glory.

“I would like to say thanks to Brunei for restoring my car, and I hope they can keep this up,” Shannan said.