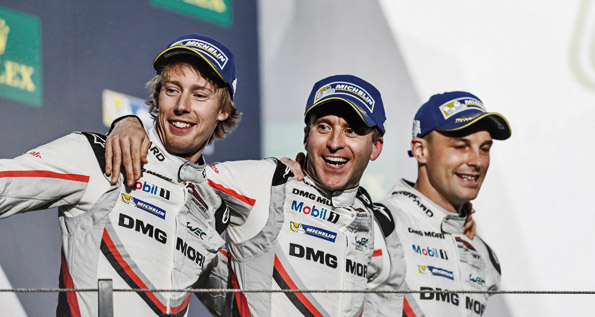 Stuttgart. Finishing second and third at the penultimate round of the FIA World Endurance Championship allowed to successfully defend the drivers’ world championship title as well as the one for manufacturers. The LMP Team will return home to Stuttgart with the manufacturers’ trophy for the third consecutive time. The works driver trio of Earl Bamber (NZ), Timo Bernhard (DE) and Brendon Hartley (NZ) finished second in the six-hour race of Shanghai and are the new world champions. Their teammates with the sister car – the outgoing world champion Neel Jani (CH), André Lotterer (DE) and Nick Tandy (GB) – came third in China. A technical issue early in the race had caused them to drop back. Victory in the WEC’s round eight of nine went to Toyota. Until the 174th of 195 laps it looked as if the manufacturers’ title would remain open until the final race in two weeks time. But then the second Toyota had to pit for repairs after a collision and the two 919 Hybrids each moved up a position.

The race took place on a consistently dry track with ambient temperatures of around 15 degrees Celsius. The abrasive tarmac of the Chinese Formula One circuit was a decisive factor as normal.

How the race went for car number 1:
Start driver Nick Tandy, who had his 33rd birthday today, battles with both Toyotas and successfully defends second position until a sensor issue drops him back on lap 19. He receives instructions via radio how to activate the back up solution. The 919 is running fine again, but Tandy is now in fourth position, running one minute and 15 seconds behind the third placed sister . Tandy refuels after 31 laps. End of lap 62 the second stop is due. Neel Jani continues on fresh tyres, he is now one lap down from the leading Toyota. With 75 laps completed, Jani uses a full course yellow period to fill up again. On lap 91 he is also lapped by the second Toyota (number 7). The next stop for fuel is due after 106 laps: pick up is removed from the front splitter and Jani gets two used and two new tyres. With 136 laps completed, the number 1 is refuelled again. André Lotterer jumps in and gives it a go on fresh tyres. He refuels after 167 laps (race lap 168) for the last time. When the number 7 Toyota needs to pit for repairs after a collision, Lotterer moves up to third.

How the race went for car number 2:
For a short time after the start, Earl Bamber manages to improve to third position but then has to let the faster number 8 Toyota go and finds himself back in fourth. When the other has its technical issue, Bamber goes into third. He refuels after 30 laps and after 61 laps, hands over to Brendon Hartley, who gets fresh tyres. After 76 laps the car is refuelled under Full Course Yellow. Three laps later Hartley is almost forced off track by a LMP2 car. There is contact but with no major damage. Having 107 laps completed, Hartley refuels again. The tyres stay on the car but the front hood is changed to get rid of pick up. On lap 126 Hartley is lapped by the leading number 8 Toyota. After 137 laps for the number 2 car, Hartley hands over to Timo Bernhard who continues on fresh tyres. He refuels after 166 laps (race lap 167) and gets promoted to P2 when the number 7 Toyota has its unscheduled repair stop.

Fritz Enzinger, Vice President LMP1: “Today’s race told another chapter of an almost unbelievable success story that shortly comes to an end. For the achievement of six world championship titles and three Le Mans overall victories, this team deserves the highest praise. With a great team spirit and good fun, they had a common aim: to win races for . This was again rewarded today by the defence of both world championship titles. What we have experienced over especially the last three years will take some time to sink in. Hats off to every single team member that contributed to this success and I want to thank everyone at worldwide, especially the board. They have supported us right from the beginning, believed in us and gave the programme a high priority. Without this backing, we would not have won those races. This also goes for the great cooperation with our partners right from the beginning. Now I’m looking forward to an exciting race in Bahrain where many board members will join us. I’m utterly proud of our achievements over the recent years.”

Andreas Seidl, Team Principal: “First of all congratulations to Toyota for a strong performance in today’s race. Congratulations also to Earl Bamber, Timo Bernhard and Brendon Hartley for the drivers’ championship. For sure it’s a sensational story to win all these titles and races three years in a row. At the same time, it was a big relief today not just for me but for the entire team that we could seal the two championships with one race remaining. It was not an easy situation in recent months, especially after the announcement was made to stop after this season. But we kept everyone focussed and built up a points gap in the middle of the season. We are really happy that this worked out today. A big thank you to everyone back home in Weissach for the sensational work they have done again this year. A big thank you to the race team here that was delivering despite all of the pressure at each race. And finally, a big thank you to all six drivers. What they have done this year was sensational team work – also between the two cars. “

Drivers 919 Hybrid car number 1:
Neel Jani (33, Switzerland): “Our car number 1 crew has been unlucky this year, a throttle sensor problem causing us a problem in this race. But we would not have caught both Toyotas and so in this regard, it wasn’t a massive problem. Now we have to turn around this streak of bad luck in Bahrain – a race win would be great. Congratulations to the sister car crew for the title.”

André Lotterer (35, Germany): “It’s cool that we got on the podium with both crews. Congratulations to our three team mates for becoming the new world champions. It is great that we also won the manufacturers’ title, the team did a top job. For us it wasn’t easy today after we had the issue early in the race. It was basically a case of bringing it home after that.”

Nick Tandy (33, Great Britain): “The sensor issue is a big shame because we really were in the fight with the two Toyotas but the problem cost us nearly one lap. Afterwards only a safety car or a very fortunate full course yellow could have allowed us to get back in contention. However, we were lucky that we could stay in the race because it was not known how quickly the problem could be fixed. Congrats to Timo, Brendon and Earl.”

Drivers 919 Hybrid car number 2
Earl Bamber (27, New Zealand): “World Champion! It just sounds amazing. The team was fighting hard for it all year and now we grab the manufacturers and drivers world championship. I did a double stint at the start of the race. It was okay but it didn’t look like we were on the right tyre. I just tried to manage the tyre as best as I could for the double stint. The tyres held on very, very well actually, but we didn’t have a chance against the Toyota. The task was to bring it home in third position which ultimately became second. This weekend is super special. I can hardly believe that I won my first championship with back in 2013, only four years ago.”

Timo Bernhard (36, Germany): “The second world championship title – this is kind of crazy and difficult to put in words. It is an honour to drive for the LMP Team and the brand, it is mega. I am relieved that we have secured both titles here. Now we can face Bahrain a little more relaxed. My stint was good but of course we knew a third place finish would be enough. I could have pushed harder but it just wasn’t necessary. Instead we slowed the car down a bit for safety. Toyota was not really within reach today, but the car was reliable and the crew did another sensational job. This is what endurance racing is about. Many, many thanks to everyone and of course to Brendon and Earl.”

Brendon Hartley (27, New Zealand): “I was second in the car and stayed there for 76 laps. We lost a lot of downforce in the beginning, so the first stint was hard work. At the stop, we changed the nose which improved this issue. But we had one set of tyres less than all the other cars after we lost one in qualifying. So this was a kind of game over for us. But we definitely have had an incredibly year. Taking the World Championship title after winning Le Mans – it might take a while until it all sinks in. I had a few busy weeks but sharing this moment with Earl and Timo I will not forget for the rest of my life.”