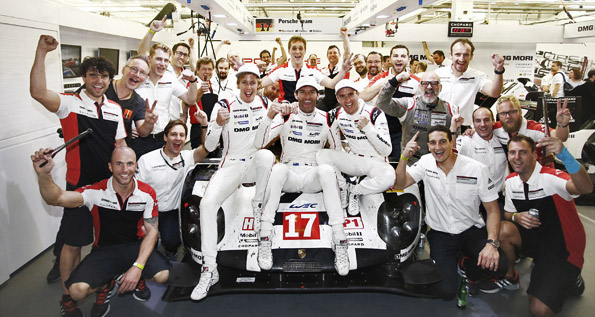 The eighth and final WEC round was a thriller, and this also applied to the drivers’ championship battle. Bernhard/Hartley/Webber had started with a 13-point lead ahead of the best placed Audi trio. Given the great season had had so far with the Le Mans victory and the early win of the manufacturers’ title, it looked possible to win the drivers’ title in Bahrain. But half an hour into the race the number 17 car had to come into the pits for a long repair stop. After that the trio had to go flat out to catch up from the very back of the pack, and eventually they finished fifth. It was the sister car that took the lead and the crucial points away from the Audi.

How the race went for car number 17:
Start driver Timo defends the lead up to lap 16. On lap 17, nearly half an hour into the race, he radios in that he has a loss of engine power and pits. The mechanics fix an engine actuator problem in 8 minutes 43 seconds. Timo rejoins the race four and a half laps behind the leader. The leader had completed 52 laps when Timo comes in for his first planned stop, still four laps behind but back in the top ten in the 32 car field. Brendon takes over the big job of catching up on fresh tyres. After 83 race laps – 79 for his car – he comes in for fuel and tyres and remains in the car. At the end of lap 114 (110 for car number 17) Brendon hands over to Mark Webber, who continues in fifth because the number 8 Audi has had a long stop for repairs. He pits for fuel and fresh tyres after 144 laps. After race lap 158 (154 for the car) Mark is called in for another unscheduled pit stop with an actuator problem. He rejoins the race without losing a position. After 183 laps he has his final splash and dash, before he crosses the line in fifth – and becomes world champion.

How the race went for car number 18:
Romain Dumas stays second behind the leading sister car for the first nine laps. On lap ten he is overtaken by the number 8 Audi. When the teammates have their long repair stop, Romain moves back into P2 and takes the lead when the Audi refuels. After 29 laps Romain comes in for fuel and tyres, and stays in the car. After 59 laps he hands the car over to Marc Lieb, who gets fresh rubber again after 89 laps. At a restart after a full course yellow on lap 100, Marc manages to outpace the number 7 Audi but drops back again. The following thrilling duel ends with Lieb taking the lead. On lap 119 the rivals both use a full course yellow to pit for a driver change. Neel Jani takes over the leading . He refuels and picks up fresh tyres after 147 laps. His last pit stop is after 176 laps, and after 199 laps he takes the long awaited first race win this season.

Fritz Enzinger, Vice President LMP1: “This was no race for the nervous. Because of the issues we had with car number 17, we found ourselves in new situations all the time. You cannot imagine better team-work after the number 18 crew had handed the number 17 crew the title by winning the race. The one hundred per cent qualifying result over the season, winning all the races since Le Mans, is an amazing success. Thanks to , thanks to the Weissach team and the crew here at the track. I’m terribly proud of the team, which has grown together. It is the greatest pleasure to work with them.”

Andreas Seidl, Team Principal: “What a race! Congratulations firstly to Timo Bernhard, Brendon Hartley and Mark Webber for their well deserved world championship title. We experienced a very difficult race today. But again we were able to show that we can cope with it. After a perfect season this is the icing on the cake. Thanks to the team here and at home and to all our technical partners and sponsors, who have supported us right from the beginning of this programme and who deserve a big share of this success. From tomorrow on the new season starts.”

Timo Bernhard (34, Germany): “I had a super start and was able create a gap between myself and the rest of the field. But about half way through the first stint the engine wouldn’t go on throttle anymore. The mechanics did a great job in repairing this so quickly, many thanks for that! I was able to catch up and it went quite well. After the repair it was all about staying cool and keeping fighting. We knew we had the speed. It was an intense race to wrap up an intense season.”

Brendon Hartley (25, New Zealand): “I drove two clean stints driving flat out and trying to catch the two Toyotas, and at that moment we knew every second could be crucial. The boys in the pits did a fantastic job to get us out again and, of course, it was absolutely crucial that our sister number 18 car stayed in the lead. A true team effort! Incredible!”

Mark Webber (39, Australia): “Today clearly shows the qualities of the team. We have had some very smooth days this year, but we executed the victories with clinical precision. Today was about fighting as hard as possible. You saw the spirit of the mechanics; you saw the spirit of the drivers. I cannot thank the mechanics enough. The pit stops we had in the garage were extremely stressful. It’s amazing that we were able to win the world championship under pressure like this. I am so proud to be world champion with Timo and Brendon and with . It was 1986 when Derek Bell managed this the last time. It was a massive day for the team!

Romain Dumas (37, France): “I was in the car for the first two hours and it was very, very difficult. We had issues with the brake performance and struggled a lot for various reasons. But I was hoping it would get better in cooler temperatures later in the race.”

Neel Jani (31, Switzerland): "For us three this race win was overdue. We have been in P1 so often, but didn’t get the victory laurels for various reasons. It was a great relief to finally get it today. I was able to manage my speed and get home safely in the lead without taking risks.”

Marc Lieb (35, Germany): “On my first stint the car wasn’t as good as I had hoped it would be. The tyres were on the limit, and I also lost some time on the first laps when the traffic was really heavy. But once I found my rhythm it was all okay, and my second stint was great with the car performing very well. The battle with the Audi was tough but good fun. He was on new tyres, and I was on old ones. That’s why the opportunities were not great, but then my car improved and his got worse, so I was able to pass him and take the lead.”