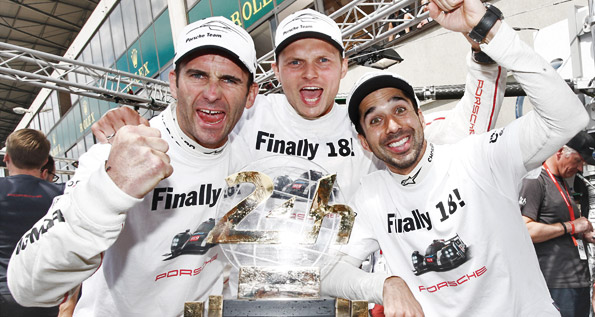 Stuttgart. From midnight the duel between and Toyota for the 24 hour Le Mans race win had intensified but no-one would have expected such an ending. Before the final lap, Toyota seemed to be coming out on top but then the prototype stopped on track. One lap later it was the number 2 919 Hybrid of Romain Dumas (FR), Neel Jani (CH) and Marc Lieb (DE) that took the chequered flag first in front of some of the 263,000 spectators that attended the event. It was the same trio that had achieved the maiden win for the 662 kW (900 PS) prototype in 2014 in Brazil.

The success is the 18th overall victory for at the world’s hardest car race. One of the most eligible trophies on the globe will be homed for the second consecutive year at ’s head quarters because the company came as record holder and title defender. In 2015 drivers Earl Bamber (NZ), Nico Hülkenberg (DE) and Nick Tandy (GB) won with a 919 Hybrid. The first ever overall Le Mans victory for dates back to June 14th, 1970 and was achieved by Hans Herrmann and Richard Attwood in a 917 KH .

The second 919 Hybrid with car number 1, shared by reigning endurance world champions Timo Bernhard (DE), Brendon Hartley (NZ) and Mark Webber (AU), had a long stop for repairs at night, fought back and finished 13th overall. In the LMP1 class it came fifth. was rewarded in Le Mans with a total of 71 points for the manufacturers’ standings of the FIA World Endurance Championship (WEC). For the Le Mans 24-Hours twice as many points are awarded as for the other eight six-hours races of the championship. leads the manufacturers’ standings with 127 points ahead of Audi (95) and Toyota (79). In the drivers’ standings, Dumas, Jani and Lieb have now 94 points in total and lead by 39 points.

How the race went for after Sunday noon:

Marc Lieb had a strong quadruple stint, occasionally leading in the number 2 919 Hybrid before he handed the car over to Neel Jani at 11:50 hrs after 331 laps. The Swiss refuelled after 345, 359 and 373 laps. After 381 laps he had to pit because of a slow puncture and then, in the last moments of the race, a P2 finish appeared the best possible result. But then the leading Toyota stopped on track just before the final lap.

The number 1 sister car, that was leading earlier in the race but dropped back by 39 laps after a water pump failure and consequential damage at 23:13 hrs, was in the hands of Mark Webber at 11:20 hrs after it had done 285 laps. Webber refuelled after 298 and 311 laps. After 324 laps Webber handed over to Timo Bernhard, who had his final splash and dash after 337 laps and brought the car home in 13th place overall after it had covered a distance of 346 laps.

Fritz Enzinger, Vice President LMP1: “First of all I would like to express my respect for the sensational performance which Toyota gave in this race. It was a great fight with them. Shortly before the finish we had settled for second place until we suddenly claimed our second Le Mans victory in a row. I would like to thank our great team in Weissach, our team here in Le Mans and all employees and fans which have supported us here.”

Andreas Seidl, Team Principal: “First of all we certainly feel for our colleagues and friends from Cologne. To give away such a great race this way on the last lap is something you wouldn’t wish on your worst enemy. But this is the sport with all its highs and lows and that’s also why we love it for. It was a strong fought victory. We had to put Toyota under pressure and went flat out for the entire race. Also our drivers were on the edge. The frequency with which the leader changed was extreme. Since we have started development and preparation for the 919 Hybrid we have delivered a strong performance. This goes for our colleagues at home in Weissach as well as for the race team. As happy as I am for the number 2 crew, I feel sorry for the guys from the number 1 car. Without the failure and the long repair they would have been able to fight for the win as well. To win Le Mans is the highlight of the season and it is difficult to believe we have managed it twice now in what is only our third year. Now we look forward. We take a lot of points from here and now we want to defend both world championship titles as well.“

Drivers 919 Hybrid car number 1:
Timo Bernhard (35, Germany):
(9 races: overall victory 2010, overall second 2015, class victory GT 2002)
“Congratulations to our sister car and the Team, it is a well deserved win. They fought for the lead for 24 hours and were very close in the end. Of course I feel sorry for everybody at the Toyota Team. To lose a race this way is brutal. We were not lucky either and I also feel sorry for Mark, Brendon and our crew. The guys were relentless and did an excellent job to fix the 919 Hybrid and get it up and running again. We had quite a bit of misfortune this year but have to be able to handle that. Our car was really fast, we easily could go at the speed of the leaders and at least we have won more points for the manufacturers’ championship for . Next year we come back. I don’t give up and want to win here with .”

Brendon Hartley (26, New Zealand):
(4 races: overall second 2015)
“On the final stints in our car it was important to get the driving time in for all drivers to collect some points. Our was feeling very good. We are all a bit upset that we had problems earlier on. But everyone in the team showed fighting spirit and then we kept our fingers crossed for the sister car.”

Mark Webber (39, Australia):
(4 participations: overall second in 2015, not racing in 1998 and 1999)
“I am very proud of the team, proud of the mechanics who worked so hard. It’s an honour to drive for in Le Mans again. It wasn’t our day, we were unlucky with the water pump. That was the big problem for us, we lost a lot of time. But Timo’s and Brendon’s drives were awesome. In the end we all prayed for car 2 and of course I’m happy for our team mates and . But what has happened to Toyota today, is really hard to take and you have to feel for them.”

Drivers 919 Hybrid car number 2:
Romain Dumas (35, France):
(15 races: overall victory 2010, 3rd place overall 2007, 5th place overall 2015, class victory GTE 2013)
“For sure we feel sorry for Toyota. It was a great race. But of course if you get the chance to win Le Mans, you won’t say no thank you. It’s impossible to realize right now what just happened. This year, the lap times were a bit slower due to the regulation changes.”

Neel Jani (32, Switzerland):
(7 races: qualifying record lap and 5th place overall 2015)
“I feel heartbroken for the Toyota drivers. I think every racing driver knows how this feels like. I still have no words to describe winning the 24 hours of Le Mans. This is really surreal. Still we drove a very good race with very few mistakes and pushed the car to the maximum. This win is really, really special.”

Marc Lieb (35, Germany):
(10 races: 5th place overall 2015, class victories GTE 2013, GT2 2010, GT 2005)
“It was not at all an easy race with regards to traffic and slow zones. The last quadruple stint I did was really on the edge. Even the first three stints were quite difficult with overtaking in the traffic and taking risks. In the last one I then also had to save fuel, and especially the front tyres that began to lose performance. I gave everything I had – and now I think I have to digest what all has happened today.”


Media Service:
• Live communication from the pit on Twitter @_Team.
• To receive press releases and photographic material automatically, to access the archives and to download video material, please register at: https://presse.porsche.de
• At https://presse.porsche.de/motorsport the new Motorsport Media Guide is available.
• Videos can be found on the channels on Vimeo and YouTube.
• www.newsroom.porsche bundles the latest press releases and background information and is accessible without registration.
• The official WEC App can be downloaded free of charge in its basic version and can be extended (not free of charge) by a live stream. Several live features, such as on-board cameras, timing and GPS tracking, are implemented in the Motorsport App (free of charge).
• On the Web current information is available from www.fiawec.com an www.24h-lemans.com. Further interesting information about Motorsport waits at .com/FutureSportscar.