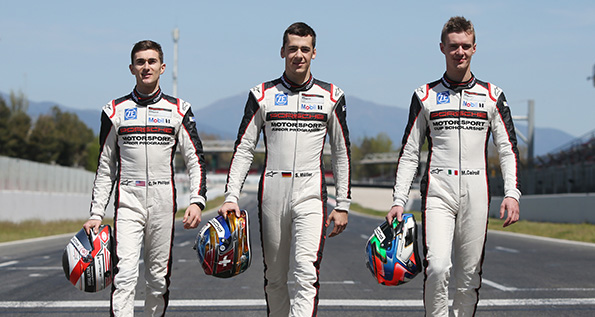 Talented young drivers have until August 1st to put themselves forward to become a Junior for the 2016 motorsport season. With its successful development programme for young hotshots, has opened the door for prospective candidates to apply for the selection process. In this respect, continues to pursue one goal: to train promising youngsters to become professional race drivers.

Applications are open to candidates who are born between January 1st, 1994, and February 28th, 1998. Aspirants must be able to prove their participation in a touring car and/or single-seater series and must not have contested a full season in a Cup, GT3 Cup Challenge or in a higher level GT series. To apply for the youth development programme, potential candidates should use the following application form: www.porsche.com/juniorprogramme. Candidates who are successful in the application procedure will participate in a two-stage selection process which includes fitness and endurance tests as well as demonstrating their driving skill at the wheel of the 460 hp 911 GT3 Cup.

The chosen Juniors sign a contract with AG and will receive support in the Cup Deutschland. Aside from 150,000 Euros in funding, the Juniors receive assistance similar to the internationally successful factory pilots. Fitness tests with constantly adapted training plans as well as media coaching and sponsor obligations are also part of the programme. The former works driver Sascha Maassen is on hand as a mentor to the juniors at every race. From the Cup Deutschland the juniors move up to the Mobil 1 Supercup. Should they be successful at this level, at best a contract as a works driver beckons.

’s youth development programme was launched in 1997 when the first UPS Junior team lined up on the grid. Since then, 19 of the young race drivers who have received support in the junior programme have managed to climb the ladder to become professional race drivers: factory pilots like Timo Bernhard (D), Marc Lieb (D), Patrick Long (USA), Christensen (DK) and Earl Bamber (NZ) represent in various race series around the world. Bamber wrote history as the youngest graduate of the junior programme: The New Zealander gained his first one-make cup experience in the Cup Asia and the Cup Deutschland. In 2014 he won the Mobil 1 Supercup as a Junior, and in 2015 he clinched victory at the 24 Hours of Le Mans as a works driver at the wheel of the 919 Hybrid LMP1 vehicle.