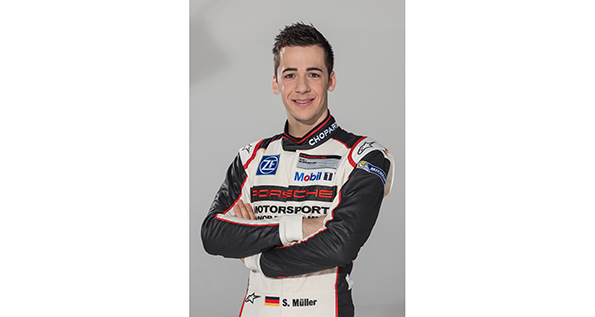 supports three talented young race drivers as Juniors in the 2015 racing season: Connor de Phillippi (22), Sven Müller (23) and Matteo Cairoli (18) will tackle the Mobil 1 Supercup and the Cup Deutschland for their respective teams. American-born Connor de Phillippi contests the Supercup for the VERVA Lechner Racing squad. In the Cup he drives for Land Motorsport. Sven Müller from Germany’s Rhineland region fights for championship points in both series for the Walter Lechner Racing team. The third junior, Italy’s Matteo Cairoli, has chosen the Project 1 / Fast Track Racing Center outfit for his campaign in the two championships.

The three young race drivers in the junior programme enjoy ’s backing for the entire season. In addition to each receiving financial support of 200,000 Euros for their Mobil 1 Supercup campaign, the trio attends workshops in the fields of fitness, media relations and psychological training. The former works driver Sascha Maassen is on hand at each race to coach the talented juniors.

Sven Müller, who already received support last season as a Junior, can look back on a commendable season. His impressive 2014 tally includes a total of seven podium positions in both series, as well as fourth overall and the rookie title of the Cup Deutschland. “I’m looking forward to my second season as a Junior. It’s the best support you can imagine as a budding professional race driver. To prepare perfectly for the season we joined the GT factory pilots at the fitness camp in Qatar, where we underwent eight days of intensive physical training. Every day I see a noticeable boost in my fitness level. I’m pleased to have a strong team like Lechner Racing supporting me,” says Müller. For Connor de Phillippi, 2015 marks his third season as a Junior. He made an impressive start in 2013, clinching the rookie championship in the Cup Deutschland. In 2014 he scored two podium spots and a victory in the Cup. 2015 is Matteo Cairoli’s maiden season as a Junior. He emerged as the winner of the worldwide selection shootout from ’s brand trophy series. In 2014 he secured championship honours in the Italian Cup.

In addition to the one-make series, the three young pilots will also race a at selected rounds of the VLN Endurance Championship on the Nürburgring. Cairoli and Müller also get the chance to demonstrate their prowess at the Nürburgring 24 hour race.

Talent scout programmes enjoy a long tradition at Motorsport. Many supported pilots have succeeded in climbing the ladder from Juniors into international GT and prototype racing since 1997. Through the makes cups, ’s Junior programme gives promising youngsters a chance to earn themselves a works driver contract. Consequently, the Supercup is regarded as a launching platform for a professional racing career. Some of most successful pilots to come from ’s young driver initiative are works drivers Timo Bernhard, Marc Lieb and Patrick Long. After winning the 2014 Mobil 1 Supercup, Earl Bamber was promoted from Junior to works driver. For the 2015 season, Bamber contests the Tudor United SportsCar Championship in the USA in the 911 RSR and takes the wheel of the LMP1 919 Hybrid sports prototype to tackle the WEC races at Spa and Le Mans.