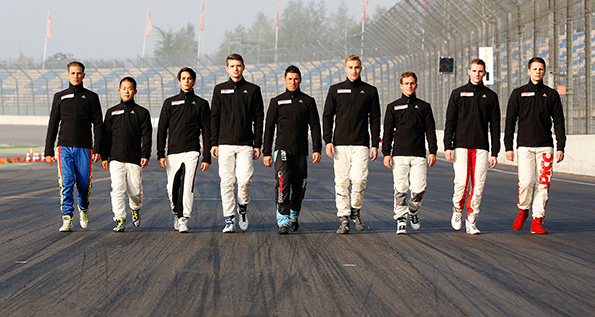 As part of a two-day selection process, nine talented young race drivers from around the world showcased their skills at the Lausitzring. Drivers from eight countries had been nominated by the respective international one-make cups and were invited to the shootout at the race track between Berlin and Dresden. The young hopefuls took part in driving tests in the 460 hp 911 GT3 Cup and conducted discussions with experts, which will all be evaluated over the next few weeks to determine a winner. The most promising talented young driver receives funding of 200,000 Euro as well as comprehensive support: On the programme are fitness tests with regularly adapted training plans as well as media coaching and sponsor obligations. The winner will contest the 2016 season of the Mobil 1 Supercup.

A prime example of a successful talent promotion within the motorsport pyramid is Earl Bamber. The New Zealander launched his career as a privateer in the GT3 Cup Challenge New Zealand and then switched to the Cup Asia, where he secured the title in 2013 and was nominated for the Mobil 1 Supercup talent scout initiative. As a Junior, Bamber won the Supercup in 2014, defended the title in the Cup Asia that same year and earned himself a contract as a works driver. In June 2015, he won the world’s most famous long distance race, the 24 Hours of Le Mans, at the wheel of the 919 Hybrid.

Now, the hopeful young aspirants at the shootout are eager to follow in his footsteps. “Bamber is a perfect role model. Every race driver dreams of such a career,” was the unanimous sentiment of all participants. These young hotshots know that the scholarship might open the door to becoming a works driver. The aspirants in the running for the scholarship are Mathieu Jaminet (20) from Woippy near Metz representing the Cup France. Twenty-one-year-old Riccardo Agostini from Padova was nominated for the selection process by Cup Italia. Josh Webster (21) from Stowmarket, England, represents Cup Great Britain. Mikkel Overgaard Pedersen (18) from the Danish town of Struer was sent as a delegate of Cup Scandinavia. Yuya Motojima (24) from Nagoya, who has just concluded his season in the Cup Japan, travelled as the Japanese champion to the Lausitz. Germany’s Nico Menzel (17), who lives in Kelberg in der Eifel, contested this year’s Cup Asia and was selected to represent this one-make cup series. Elliott Skeer (21) from Carlsbad in America received an invitation to the shootout after his excellent performances as champion of the GT3 Cup Challenge USA. Nick Foster (23) and Richard Muscat (23) have been elected to represent the Cup Australia.

“With nine strong drivers it’ll be a tough decision for us. Fast lap times are equally as important as how they conduct themselves away from the race track. The talented youngsters are nominated by countries and regions in which a one-make cup is contested and who have the potential to be successful at an international level. We will analyse all parameters in order to select the best candidate,” said Andrea Hagenbach, Manager of the Motorsport Junior Programme.

Talent scout initiatives have a long tradition at Motorsport. Using this path, many scholarship pilots have managed to climb the career ladder into international GT and prototype racing. The Motorsport Junior Programme gives drivers from the worldwide one-make cups the chance to earn themselves a season in the Mobil 1 Supercup. The Supercup serves as a launching platform into a professional racing career.