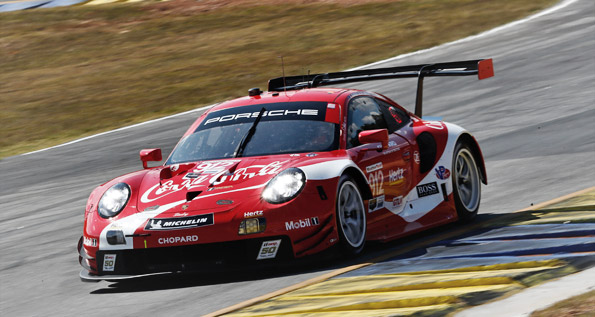 Stuttgart. takes up the final round of the IMSA WeatherTech SportsCar Championship from the second grid row. In the qualifying session at Road Atlanta (USA), the Belgian Laurens Vanthoor secured the fourth grid spot at the wheel of the No. 912 911 RSR. In the No. 911 sister car, his works driver colleague, Nick Tandy (Great Britain), turned the seventh quickest lap in the close hunt for top times on the storied 3.6-kilometre racetrack. The 911 GT3 R fielded by the Canadian team Pfaff Motorsports will tackle the GTD class from position six on the grid.

In warm, sunny conditions in the US state of Georgia, teams and drivers battled hard for top times in the 15-minute qualifying. As the session progressed, lap times tumbled. Vanthoor’s times improved over the first five laps before traffic and deteriorating tyres hampered further progress. For the race, the championship leader shares the cockpit of the ca. 510 hp No. 912 911 RSR with Earl Bamber (New Zealand) and Mathieu Jaminet (France).

At the wheel of the sister car, Tandy patiently warmed up his tyres at the start of the session before heading out and initially topping the time sheet in his class. The British racer, however, could no longer make any significant improvements and thus defend himself against the attempts of his rivals. Tandy shares driving duties in the No. 911 with the two Frenchmen Patrick Pilet and Frédéric Makowiecki. Both vehicles contest the race flying the colours of Coca-Cola.

In the GTD class, Zacharie Robichon planted the No. 9 911 GT3 R fielded by Pfaff Motorsports on position eight. The Canadian is joined in the cockpit of the 500+hp GT3 vehicle by his compatriot Scott Hargrove and development driver Lars Kern (Weissach). The ten-hour Petit Le Mans race gets underway on Saturday, 12 October, at 12:05pm local time (18:05 pm CEST).

Pascal Zurlinden (Director Factory Motorsport): “We can be satisfied with the results of the qualifying. There were five different manufacturers within about two tenths of a second. This underlines just how intense and tough the competition is in the GTLM class. I’m feeling confident for the race because we’ve worked systematically on the race setup. Our car will be strong as the temperatures drop. And that’s exactly when the decisive phase starts on Saturday evening.”

Steffen Höllwarth (Head of Operations IMSA Championship): “That was a tight situation with very close gaps between all GTLM-class cars. In the sessions we put the main focus on race preparation, which means a consistently fast pace over a long distance. In view of this, the result was pretty good. Tomorrow is about the big trophies. We have to perform flawlessly and stay within striking distance. When the sun goes down, we want to go for it. We’re eager to give the fans a great show, win all the titles and send the 911 RSR into the museum with a top result.”

Nick Tandy ( 911 RSR #911): “The result is okay, although a little more could have been possible. I think I didn’t get the perfect time for my flying lap. The tyres weren’t within the optimal operating window at that moment. I’m certain that we’ll manage to set a more consistent pace in the race compared to our competitors.”

Laurens Vanthoor ( 911 RSR #912): “We had a bit of homework to do after the practice session this morning because our car didn’t have the optimal setup. We made the perfect adjustments for the qualifying. Fourth on the grid is a solid result. I made a slight error on my hot lap. We could have perhaps gained one or two positions otherwise. Never mind, the qualifying result isn’t the most important thing for a ten-hour race.”