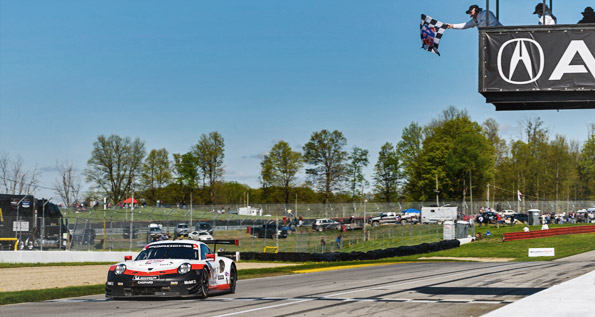 Stuttgart. The GT Team has claimed its third straight win at round four of the IMSA WeatherTech SportsCar Championship. The works drivers Earl Bamber (New Zealand) and Laurens Vanthoor (Belgium) went up against strong opposition in the GTLM class at Lexington and celebrated their second victory after Long Beach (USA). Last year, the pair in the No. 912 911 RSR won the race on the Mid-Ohio Sports Car Course. Patrick Pilet (France) and Nick Tandy (Great Britain) rounded off the strong team result with third place in the ca. 510 hp 911. Thanks to these results, has succeeded in extending its lead all classifications of the IMSA championship.

In contrast to the free practice and qualifying, the race in the U.S. state of Ohio took place in sunny, dry conditions. The GT Team implemented its experience with the vehicle and tyres perfectly and setup both 911 RSR for the changed weather conditions. As the race progressed, the drivers were able to demonstrate their strengths over the long distance. Vanthoor, who took up the fourth race of the season from the second grid spot, handed his 911 off to Bamber after around 50 minutes while running in second place. Thanks to the consistently high speed and perfect strategy, the New Zealander swept into the lead shortly afterwards. The No. 912 car held on to the lead to the flag.

However, the race for their works driver colleagues in the No. 911 vehicle turned into a rollercoaster ride. When the race went green, Pilet made a jump start. Although the ensuing drive-through penalty relegated the vehicle far down the grid, a spirited charge through the field followed. Tandy came out on top after an intense duel with a BMW shortly before the flag and brought the No. 911 over the line in third place. For the first time in North America this season, both 911 RSR racers finished on the podium.

In the GTD category, the factory driver Patrick Long (USA) and his German teammate Marco Seefried concluded the race in fourth place at the wheel of the No. 73 911 GT3 R fielded by the customer squad Park Place Motorsports. The team opted for an optimal strategy with a late pit stop during the only safety car phase of the race. With his wealth of experience, the American Long used his fresh tyres to overtake many rivals. Bad luck plagued the customer team Pfaff Motorsports. Putting in a strong stint, Zacharie Robichon (Canada) was on course to score second place in the 500+hp GT3 car from Weissach. His teammate Scott Hargrove defended this podium placing over long stretches, however, with only five minutes left to the flag, the strong performance ended in the gravel at the first corner. The number 9 vehicle was ultimately classified in twelfth place.

In the manufacturers’ classification, the GT Team now ranks first after four rounds with 135 points and a 15-point advantage. The factory pilots Earl Bamber and Laurens Vanthoor sit at the top of the points in the drivers’ classification, with their team colleagues, Patrick Pilet and Nick Tandy, on third.

The two 911 RSR contesting the IMSA WeatherTech SportsCar Championship will be transported to Europe at the end of May. On 15/16 June, the vehicles will, like last year, join the factory cars from the FIA World Endurance Championship to tackle the 24 Hours of Le Mans (France). Both vehicles will be back in North America by 30 June in time for the six-hour race in Watkins Glen (USA).

Steffen Höllwarth (Programme Manager IMSA SportsCar Championship): “That was a perfect race with a sensational result. We had the fastest car over the distance. Our engineers did a great job with the setup. With Earl and Laurens everything is working perfectly at the moment. But the pursuit race of the sister car was just as strong. Victory, podium place, leading all classifications plus the fact that our colleagues in the FIA WEC have just clinched the world championship yesterday – it doesn’t get better than this. Now we’re looking forward to the next great challenge: the 24 Hours of Le Mans.”

Earl Bamber ( 911 RSR #912): “The day was perfect for us. It’s incredible that our run in Mid-Ohio continued seamlessly. We’re leading the championship, but that doesn’t mean we’re leaning back. The competition will certainly not make it easy for us. Before the next IMSA race we first have to tackle Le Mans in mid-June. Hopefully everything will continue to go just as brilliantly there for us, too.

Laurens Vanthoor ( 911 RSR #912): “What a wonderful race! After the free practice in wet conditions, it was difficult to find a suitable setup for the changed conditions. But our team used its huge experience to do it perfectly. Our car was the strongest in the GTLM category over the distance. We’ve won Long Beach, we’ve won in Mid-Ohio – this year and last year – we’re on a fantastic roll. As far as I’m concerned, Le Mans can come now.”

Patrick Pilet ( 911 RSR #911): “After the jump start we launched a gigantic pursuit race. Nick, in particular, got the most out of the car in his stints, and I even had hopes of finishing on second place. Still, third earns us all-important points. Essentially, the overall result has put in an excellent position in the championship.”

Nick Tandy ( 911 RSR #911): “That was an extraordinarily eventful race today. During my chase through the field I enjoyed some wonderful duels with the Ford and BMW drivers. It was huge fun. But right now I’m looking forward to our start at the Le Mans 24-hour race.”

Patrick Long ( 911 GT3 R #73): “I’m really proud of our result. We started from far down the field and fought our way to the front. The yellow phase helped us a bit, but we implemented a special strategy as a team. The decision to change the tyres later proved absolutely correct. Fourth place earns us a lot of points in the championship. At the next race we’d like to be right up the front with the 911 GT3 R. It certainly has the potential.”

Scott Hargrove ( 911 GT3 R #9): “I’m absolutely devastated. Zacharie drove a strong first stint. I managed to keep our 911 GT3 R on course for a podium spot. Actually, the race was rather uneventful for me, but then I made a mistake. At the entrance to the first turn I lost the rear of the car, landed in the gravel and got stuck – game over. It’s a shame, because so much more would have been possible for us.”