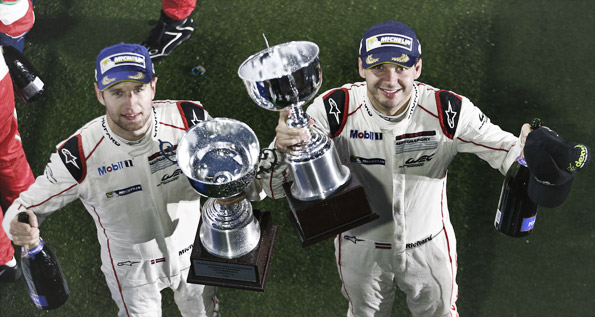 Team Manthey
FIA World Endurance Championship, round 7 in Shanghai/China – GT, Race report
Third win of the season for 911 RSR – titles to be decided at finale

Suttgart. The 911 RSR driven by Richard Lietz (Austria) and Michael Christensen (Denmark) has won Sunday’s six-hour race on Shanghai International Circuit. This marks the third victory of the season for the 470 hp winning racer from Weissach, which was developed on the basis of the iconic 911 sports car and has won on the Nürburgring and at Austin this season. At the wheel of the sister 911 RSR campaigned by the Manthey squad, French pilots Frédéric Makowiecki and Patrick Pilet finished on third place.

With this result, has defended its manufacturers’ title chance in the fiercely contested GTE-Pro class of the Sports Car World Championship WEC (World Endurance Championship). While Richard Lietz has extended his lead in the FIA World Endurance Cup for GT drivers, as did the Manthey team in the team classification, managed to close the gap to Ferrari to just four points. At the final race of the season on 21 November in Bahrain, a maximum of 44 manufacturers’ points are still up for grabs.

The second race of the Sports Car World Championship WEC held in Asia was again contested predominantly on a wet track. The conditions on the 5.541-kilometre Grand Prix circuit on the outskirts of the Chinese financial capital were not quite as extreme as they were recently in Fuji, Japan, however the pilots still faced major challenges in the first four hours of racing. The start drivers Frédéric Makowiecki in the number 92 car and Richard Lietz in the 91 vehicle got away cleanly at the start and established themselves amongst the front pack of the competitive GT-Pro field. The Frenchman, who had taken off from the fourth grid spot after a difficult qualifying, had moved into second after just five laps. The Austrian, who had started from directly behind him and travelled to China as the leader of the FIA World Endurance Cup for GT Drivers, managed to settle into third place. After another ten laps, he manoeuvred himself into first place and, with a solid performance, laid the foundation for his third win of the season.

On the rain-soaked track, the 911 RSR again profited from its excellent traction thanks to its rear-engine concept. Frédéric Makowiecki left the track briefly during a duel and fell back to sixth place. But after the second hour of racing, the number 92 car, now with Patrick Pilet as the winner of the American Tudor United SportsCar Championship at the wheel, had again moved up into second place behind the leading Michael Christensen. The race strategy of the Manthey team proved a perfect match for the drivers’ performance: As the track gradually dried with two hours to go, the strategists made the call to change from wet tyres to slicks at exactly the right moment.

Marco Ujhasi, Overall Project Manager GT Works Motorsport: “The focus and the systematic preparation in practicing for the race have paid off. The conditions were difficult, but the drivers and the team made no mistakes. Now everything is wide open again heading to the season finale. The circuit in Bahrain doesn’t particularly suit our 911, but we’ll try our very best.”

Richard Lietz (911 RSR #91): “That was a difficult race. In the first three stints the decision to run wet tyres was good, but afterwards it became tricky. We changed to slicks at exactly the right time. For some it was perhaps a little early, but you need to take a risk in such a situation. During this phase of the race, Michael drove masterfully. Well done. I’m pleased for the team. To come from fifth and win is fantastic.”

Michael Christensen (911 RSR #91): “The last hours were more difficult than the start. When the track began to dry up it was critical to make the right tyre choice at the right point in time. Using an excellent strategy, the squad found a great solution to this difficult decision. We tried not to make any mistakes out on the track, and we succeeded, even though it wasn’t easy with the weather conditions and the caution phases.”

Patrick Pilet (911 RSR #92): “A difficult race with a fantastic outcome for Richard and Michael. Normally we should have finished second, but unfortunately it didn’t work out. We would have liked to earn more manufacturers’ points for . Still, we’re celebrating today – and from tomorrow we’ll turn our full attention to the final race in Bahrain.”

Frédéric Makowiecki (911 RSR #92): “We experienced a problem with the front tyre which threw us down the field after a good start. Afterwards we put on the pressure over the entire race but narrowly missed out on second place. Still, third place also yields us a lot of points towards the manufacturers’ championship.”

Points’ standings GTE-Pro after 7 of 8 races


The eighth and final round of the Sports Car World Championship WEC is contested on 21 November in Sakhir/Bahrain.