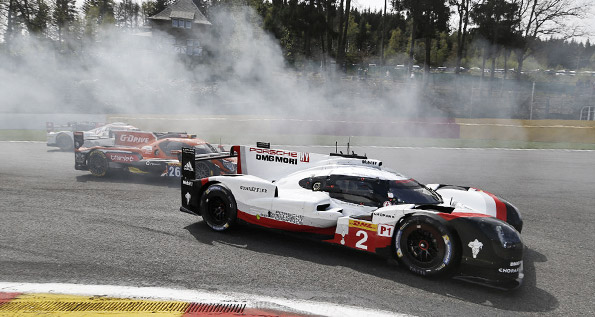 Stuttgart. In the last race before the Le Mans 24-Hours, the 919 Hybrids finished third and fourth. At the six-hour race in Spa-Francorchamps, Belgium, both prototypes endured a troubled contest. The trio of Earl Bamber (NZ), Timo Bernhard (DE) and Brendon Hartley (NZ) lost time due to a slow puncture coming home third. The sister car of reigning world champion Neel Jani (CH), André Lotterer (DE) and Nick Tandy (GB) started from pole position but was unfortunate with the timing of two “Full Course Yellow” periods that neutralized the race. They finished just behind their team mates. Hartley had the consolation of setting the overall fastest race lap to underline the 919 Hybrid’s potential. But in Spa, over the race distance, it was a pair of Toyotas that took the laurels.

Just like at the season’s opening race in Silverstone, competed again in the Le Mans aerodynamic configuration. However, the lower downforce causes higher tyre wear. Toyota raced in two different aero specifications. The car in Le Mans configuration finished behind the s.

Despite sunshine at the start, rain was predicted for the closing stages of the race but ultimately it stayed almost dry throughout. The organizers announced 61,000 spectators for the three-day event. After the second of nine rounds in the FIA World Endurance Championship (WEC), ranks second in the constructors’ standings. In the drivers’ world championship, the crews are currently second and third.

How the race went for car number 1:
Lotterer starts from pole in warm sunshine (20C). The #7 Toyota takes the lead under braking around the outside into Bus Stop chicane at the end of lap 10. Two laps later #1 drops to third as the #8 Toyota goes ahead entering La Source. The #2 sister goes past on lap 21. After 22 laps Lotterer hands over the car to Tandy who resumes in P5. On lap 29 Tandy sweeps ahead of the #9 Toyota into P4. On lap 40 he passes the sister car that is on older tyres. After 46 laps Tandy stops for fuel only, leapfrogging the #8 Toyota in to P2 during the pit-stop phase when #8 made a driver change. On lap 64 the #8 Toyota overtakes Tandy who slips to P3. After 70 laps #1 is due for fuel again; Tandy hands over to Jani. The next stop for fuel only after 94 laps comes just before a “Full Course Yellow” period. Jani continues in P3 but is overtaken by the #2 on lap 116 before he pits at the end of the next lap. Lotterer jumps back into the car – equipped with four fresh tyres in P4. He refuels on laps 142 and 165 in the 173-lap race.

How the race went for car number 2:
Hartley moves up one place from his fifth place start when second-row starting #9 Toyota locks up at La Source hairpin after the green light. Hartley overtakes the sister #1 for P3 on lap 21 and pits from lead for fuel only on lap 24 after the leading Toyotas had pitted earlier. Hartley continues in P3, aborts the final corner 19 on lap 39 and lets closely following #1 ahead. Hartley pits after 48 laps for full service to Bamber who resumes in P4 but is forced to pit early after 54 laps, when less than a second from P3, with a slow rear left puncture. The team replaces only that tyre while adding a splash of fuel. Bamber remains in P4 with two hours on the clock. After 78 laps Bamber gets out and Bernhard continues in P4 with more than half of the race distance to go. During a “Full Course Yellow” period the team calls both 919 Hybrids to the pits for fuel only after 94 laps. Bernhard continues in P4 until he overtakes the #1 on lap 116 to improve to P3. After 119 laps Bernhard hands over to Hartley again, who gets four fresh tyres. He sets the fastest lap of the race on lap 122 and manages to overtake the number 7 Toyota on lap 127. On his last lap before the next scheduled pit stop, Hartley has a collision with a LMP2. After 143 laps the car is refuelled and gets a new nose section. Hartley rejoins the race immediately behind the number 7 Toyota in P3 with one hour to go. After 167 laps he comes for a final splash and dash before finishing third.

Fritz Enzinger, Vice President LMP1: “We started from pole position, set the fastest race lap and scored a podium, but unfortunately we didn’t make it with both cars on the podium. We are still fine with our strategic decision to compete in the first two rounds in low downforce configuration. Now we are looking forward to our last 30-hour test next week. We will head to Le Mans full of confidence and only a few points short in the manufacturer standings.”

Andreas Seidl, Team Principal: “Congratulations to Toyota for the race win and to our team in Weissach and here at the track for a flawless performance. Again both cars finished the race with no technical issues and took points for the championships. Apparently races in Spa are not our greatest skill: Since 2014 we are on pole here every year but we never won. With our cars here in low downforce aero specification, we could not match the speed of the high downforce spec Toyotas because our tyre wear was simply to high. But the third Toyota, with low downforce, we had under control. Comparing the time we lost in the pits due to the puncture, our performance was okay. We will now have our endurance test next week in Aragon and then look forward to Le Mans.”

Drivers 919 Hybrid car number 1:
Neel Jani (33, Switzerland): “The pace was more or less what we expected it to be. We could match one Toyota but the other one was out of reach. We were a little unlucky and lost a lot of time twice during Full Course Yellows. After this our only chance to come back in the race was rain.”

André Lotterer (35, Germany): “I had a good start. I was a little surprised when the Toyota came flying by but I was expecting he wouldn’t be able to brake properly for La Source. The first half of that stint was really good but then I had a massive tyre drop and couldn’t keep up the pace. Towards the end of that first stint the situation improved but overall it was not consistent. At my first pit stop we changed the strategy. Because we were expecting rain towards the end of the race, we thought we would not have to double stint all tyres. My last stint was good as well despite some drizzle. The Toyotas have been strong, we have to catch up a bit.”

Nick Tandy (32, Great Britain): “I was the second driver in our car and had a pretty standard stint. We went a little off sequence with the tyre strategy to see if it would help us at the end of the race. But then it didn’t rain significantly.”

Drivers 919 Hybrid car number 2
Earl Bamber (26, New Zealand): “My stint started well. I came out right behind the Toyota and then was battling with number 8 but then unfortunately I picked up a slow puncture. The pace was good afterwards again and I closed the gap to the front a little but to fight back from over 40 seconds is hard.”

Timo Bernhard (36, Germany): “I took over from Earl after the puncture and tried to catch back. It was nice closing the gap. I had a good fight with Neel and managed to get ahead. We took advantage of a Full Course Yellow but Toyota did as well. In the end, Brendon was pushing hard and did a great job but there wasn’t more to get today.”

Brendon Hartley (27, New Zealand): “The Toyotas were quick at the start and I knew I was in for a double stint. With the warmer ambient temperatures, the car's balance was quite different from the previous days. But I had a strong end to the opening stint and overtook André just before the pit-stops. The sister car went onto a different strategy while we managed to keep close to the 8 Toyota. Our car was unlucky when Earl picked up a puncture which put us behind and off strategy. I was in the car for the last couple of hours. The team did a great job and our car was coming on really strong towards the finish. It's another podium, not the step we wanted to stand on, but we take confidence heading to Le Mans.“