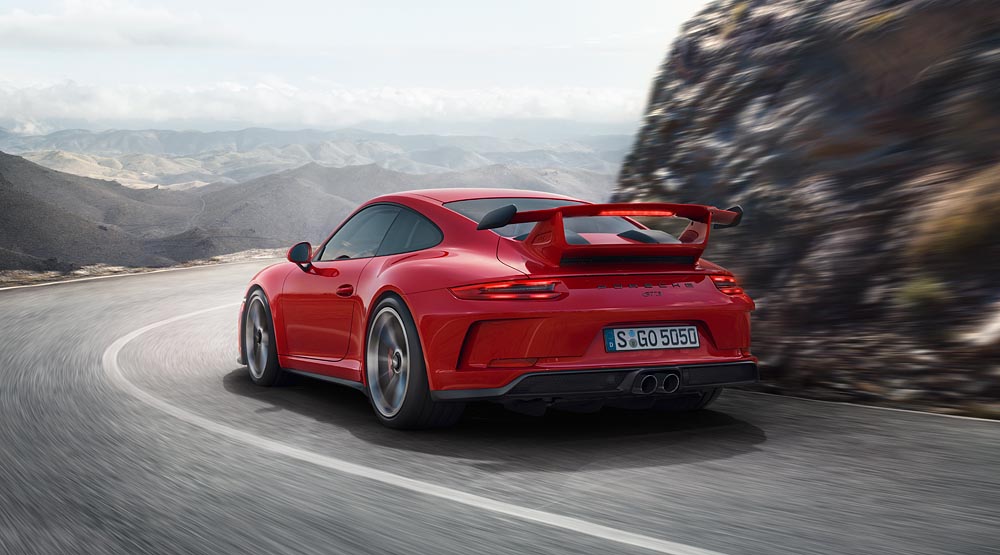 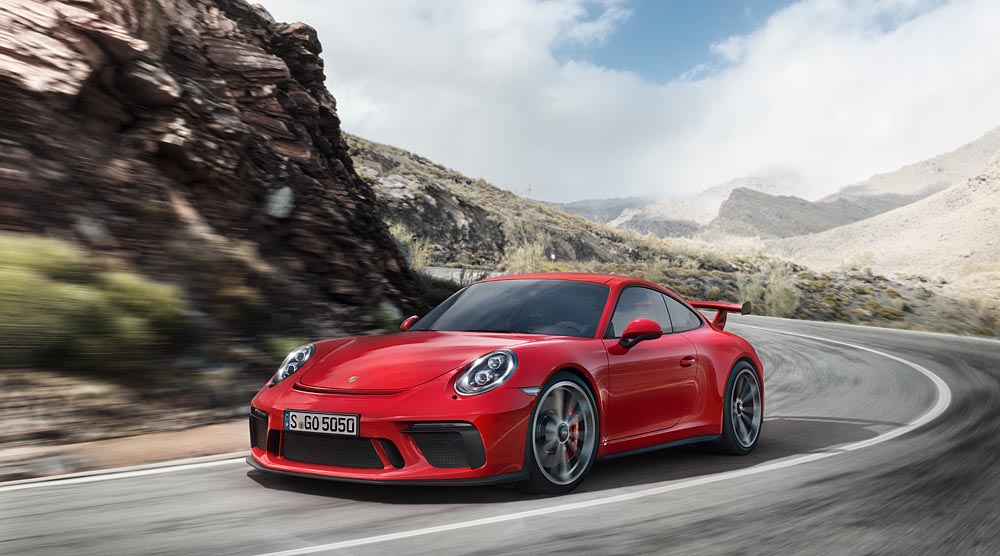 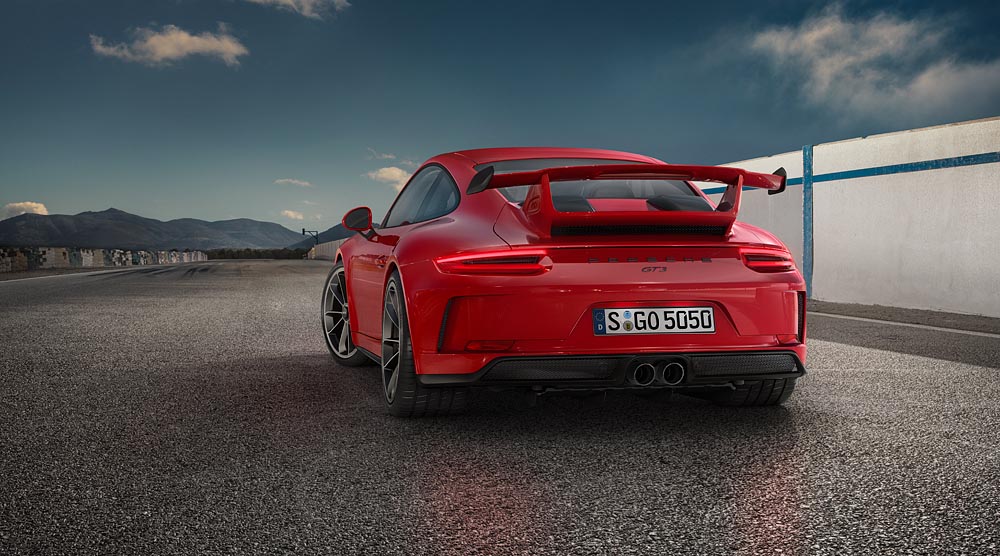 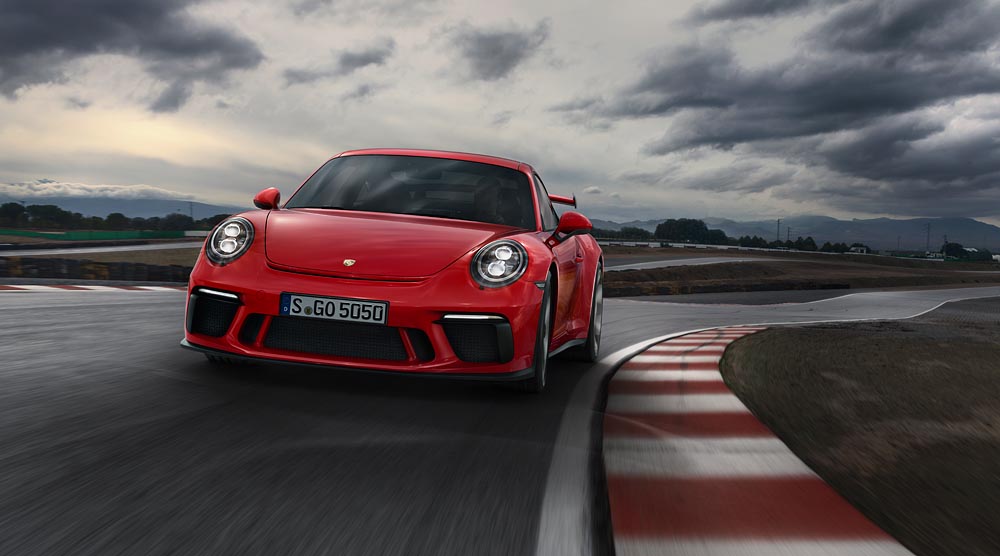 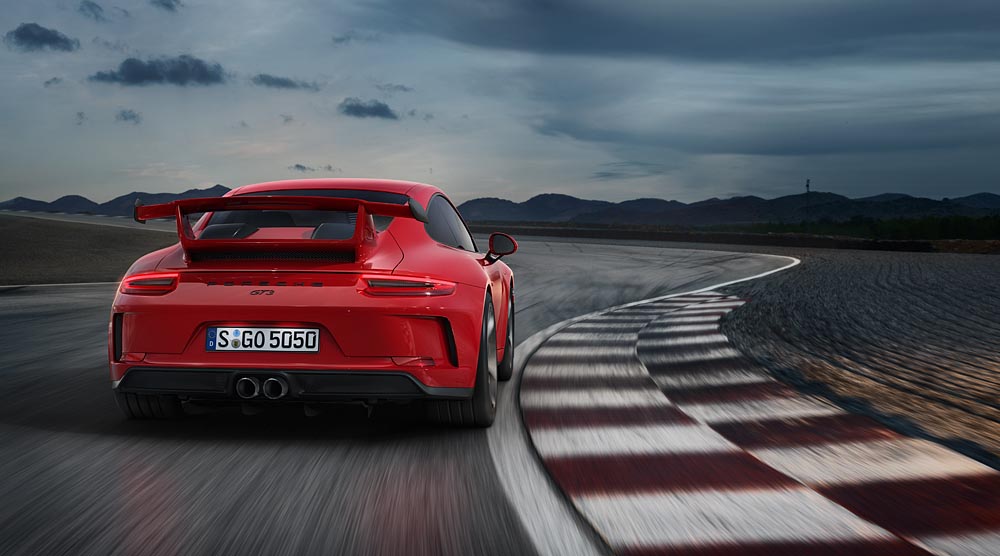 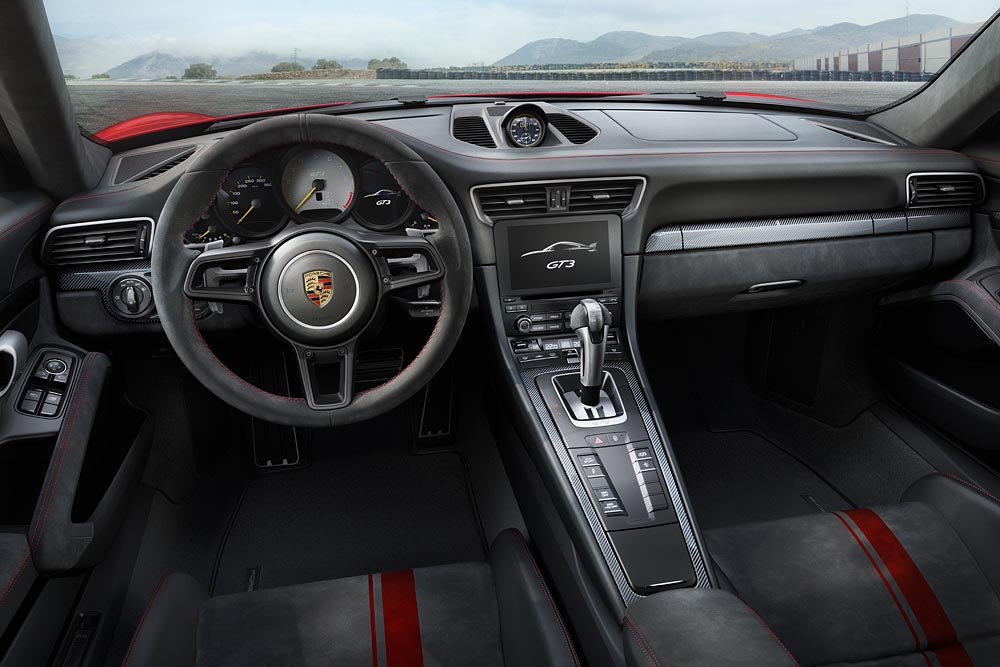 A 911 for the road and track – the new 911 GT3 World première in Geneva: More powerful naturally aspirated engine and racing chassis from motor-sport

Stuttgart . The 911 GT3 delivers motorsport-like performance, a systematic lightweight construction and an unfiltered driving experience. In the new generation of the radical 911, the connection between everyday driving and the racetrack is even more intense. At the heart of the latest enhancement beats a four-litre flat engine. The extremely high-revving naturally aspirated engine with 368 kW (500 hp) remains virtually unchanged from the thoroughbred 911 GT3 Cup racing car. The redesigned chassis with rear-axle steering and the systematic lightweight construction are specifically tuned to convert the engine power into superior driving dynamics. Developed on the same test track and manufactured on the same production line as the racing cars, ’s motorsport technology has once again been incorporated into a road-approved sportscar.

The majority of GT drivers also like to take their sportscars for a spin on the racetrack, which is where the new 911 GT3 really comes into its own thanks to its weight-to-power ratio of 3.88 kg/kW (2.86 kg/hp). With seven-speed double-clutch transmission (PDK) as standard, which has been specifically tuned for use in the GT, the two-seater weighs in at 1,430 kg with a full fuel tank and can accelerate from 0 to 100 km/h in 3.4 seconds. Its boasts a top speed of 318 km/h. For proponents of pure unadulterated driving, also offers the 911 GT3 with a six-speed sports manual gearbox. This allows the high-performance 911 to sprint from 0 to 100 km/h in 3.9 seconds and reach a top speed of 320 km/h.

Fast on the corners, stable on the straights: Rigid chassis with rear-axle steering
The chassis of the new 911 GT3 benefits from ’s motor racing experience and its tuning has been reworked for even better driving dynamics. The new two-seater sits around 25 mm lower than the 911 S. In addition to the further refined basic design, the chassis also boasts superior handling characteristics, thanks in large part to the active rear-axle steering. Depending on the speed, it steers either in the opposite or the same direction as the front wheels, thereby improving the vehicle’s agility and stability. The dynamic engine mounts and the rear differential lock also boost the car’s driving dynamics.

When it comes to its appearance, the 911 GT3 leaves little doubt as to its purpose. The dominant carbon rear wing emphasises the fact that the sportscar’s form is determined by aerodynamics. The lightweight front end and front spoiler have been optimised for an even better airflow. The aerodynamic enhancement is also evident on the lightweight rear end with exhaust air openings and on the new diffusor.

Interior: Experience centre for exceptional driving dynamics
The interior of the new high-performance sportscar is tailored to the 911 GT3 driving experience. The GT sports steering wheel with a diameter of 360 mm originates from the 918 Spyder. Both the driver and passenger experience the dynamics in Sports seats Plus with enhanced seat side bolsters and mechanical fore/aft adjustment. The seat height and backrests are adjusted electronically. As the 911 GT3 is traditionally a two-seater, the seat pans in the rear are covered.
offers three additional seat variants for the 911 GT3: The adaptive Sports seats Plus boast electrical adjustment of all seat functions (18-way). The second option is sports bucket seats with folding backrest, integrated thorax airbag and manual fore/aft adjustment. And the third variant is full bucket seats made from light carbon fibre-reinforced plastic in carbon-weave finish.

Market launch and prices
The 911 GT3 is available to order now. It will be launched in Germany from mid-June. Prices for the new high-performance 911 start at 152,416 euro, including VAT and country-specific equipment.

Images in the Newsroom (http://newsroom.porsche.com) and in the press database (https://presse.porsche.de).