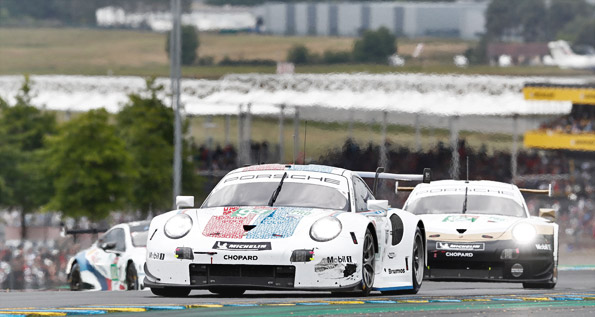 Stuttgart. The four 911 RSR contesting the GTE-Pro class have made up several positions in the initial phase of the Le Mans 24-hour race. After the first 90 minutes of the final round of the FIA World Endurance Championship (WEC) in France, the No. 93 911 RSR lies in second place with Nick Tandy (Great Britain) at the wheel. The identical ca. 510-hp car with the starting number 92 driven by the world championship favourites Kévin Estre (France), Michael Christensen (Denmark) and Laurens Vanthoor (Belgium) has moved up into third place during the starting phase.

Gianmaria Bruni has made up even more ground in the No. 91 sister car. Coming from 13th, the Italian is currently running in fourth place. Young Professional Mathieu Jaminet, who contests his first 24 Hours of Le Mans, has made up one position in the No. 94 .

In the GTE-Am class, last year’s winners Matt Campbell (Australia), Julien Andlauer (France) and Christian Ried (Germany) are on second place after the first two stints in the 911 RSR fielded by Dempsey-Proton Racing. The 911 run by Gulf Racing (No. 86) follows in third place. After 90 minutes of racing, the works driver Jörg Bergmeister ranks sixth in the Art Car campaigned by Project 1 (No. 56). The identical customer cars with the starting numbers 78 and 88 are currently catching up after incidents and unscheduled pit stops.

Comments on the race so far

Pascal Zurlinden (Director GT Factory Motorsport): “The initial phase was very exciting with intensive fights for positions. Our drivers have performed excellently in the duels and made up many positions. We have three 911 RSR in the top five. That’s an ideal situation as we head into the night. Many of our customer teams also hold good positions after the initial phase.”

Kévin Estre ( 911 RSR #92): “It was a good start. I managed to overtake a Ford in the first lap, and then fought with a BMW over many laps – with success. By the end of my stint I’d moved up into second place. It was huge fun. Our 911 RSR is outstanding to drive.”