The boxer engines in the 911 have been setting technical standards since 1974 – a few highlights.

Ben-Hur spoke these wise words about the four horses harnessed to his chariot: “Though they have separately the speed of eagles and the endurance of lions, they will fail if they are not trained to run together.” The skill of the ancient charioteer lay not only in putting the tumultuous power of his hot-blooded Arabian steeds into acceleration, but also in channeling and guiding it.

A similar situation applied to the back in the 1970s and 1980s, because its horsepower enabled brute forward propulsion. “Trainers” from Zuffenhausen and Weissach appeared on the scene to make its power develop in a more orderly fashion, but they did not dilute its racing genes in the process. At the same time, they encouraged more economical use of its valuable feed, taking the form of liquid carbon - otherwise known as gasoline.

While other carmakers were still relying on large displacements, broke new ground with its turbo engines for the road. The lean 911 had no place for an eight- or twelve-cylinder engine, so the idea of having a turbocharger - and later two of them - press additional air into the engine was a diet necessitated by the car’s own sporty qualities. As a result, the six-cylinder engine’s displacement has increased only from 3.0 liters in 1974 to 3.8 liters today, and yet its electrical output has doubled from 191 to 383 kilowatts in the 991 (991 S: 412 kW).

The engineers were also battling with the laws of physics. According to the law of inertia, in order for something to accelerate, a net force first has to be applied. This law holds true for the turbine in a turbocharger. After the driver gives gas, the turbine needs a little time to reach its full speed of around 200,000 revolutions per minute. Only when enough hot exhaust gas flows from the engine into the turbine can the compressor set about packing air into the engine. So, beginning in 1977, equipped the 911 with a charge-air cooler. Because cool air takes up less space than warm air, the oxygen throughput is increased. The following overview shows additional milestones in the development of the . 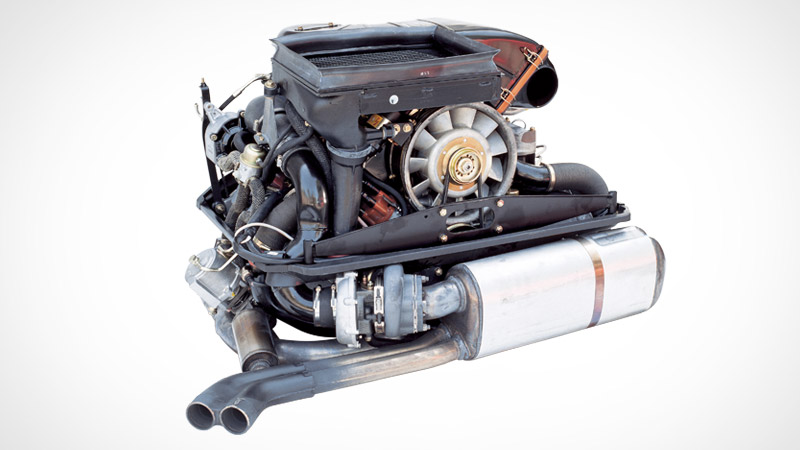 The charge-air cooler (above) ensures better filling and greater output. 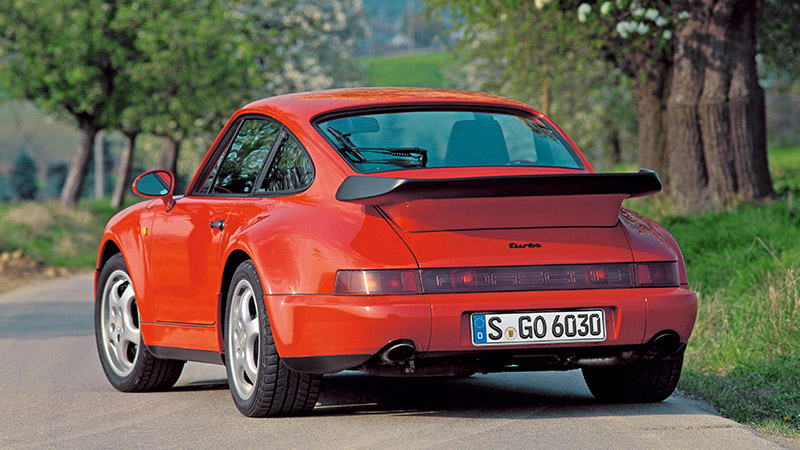 Development work on the picked up speed in the 1990s. But first, stricter exhaust gas guidelines had to be met. In typical company manner, was not satisfied with the exhaust-gas catalytic converters available on the market. Together with what was at the time a very small supplier, it developed substrates for catalytic converters that were made of metal rather than the usual ceramic. Because metal heats up more quickly, this converter reached its operating temperature more quickly. In addition to the metallic catalytic converter, the also acquired K-Jetronic technology with lambda control, electronic characteristic field ignition, and a larger charge-air cooler.

The 993 no longer had one big turbocharger but rather two smaller ones - marking the birth in 1995 of the bi-turbo engine. In this case two was more than the sum of one plus one: a smaller charger goes into action more quickly because it has less inertia. The 993 featured yet another considerable increase in acceleration out of the lower rpm levels. And its Onboard Diagnostics II System gave it the lowest emissions of any standardseries car in the world. 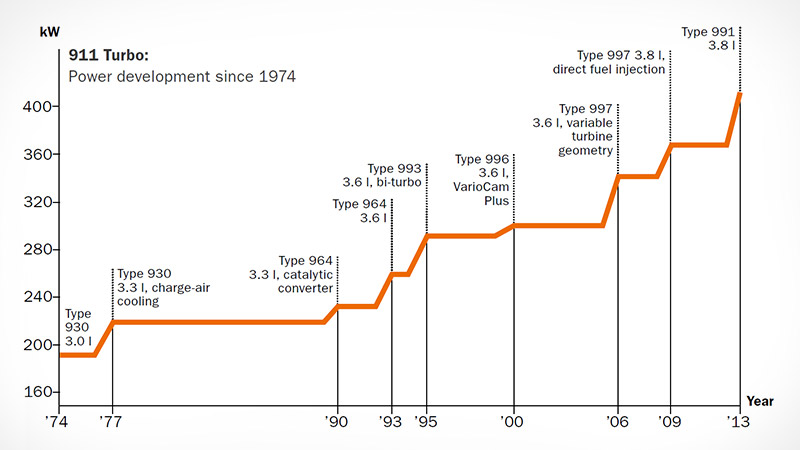 In addition to water cooling, the turn of the millennium brought VarioCam Plus with variable valve timing. It sounds complicated, but works in a surprisingly simple way. When drivers want full power from their car, valve lift is increased substantially at a very early point in time, enabling an especially large amount of the air-fuel mixture to flow into the engine. At low rpm levels with little need for torque, valve lift is lowered and sets in considerably later. Power loss is thereby reduced and the combustion process is cleaner and more stable. This development reduced fuel consumption by 13 percent for idling alone.

The next step was taken in 2006 with variable turbine geometry (VTG). It enables the charger to make optimum use of the energy contained in the exhaust gas. If a lot of exhaust gas flows toward the turbine - during high speeds on the freeway, for example - an electric guide opens the vanes in front of the turbine. Here, too, a lot of air means a lot of power. At lower rpm levels, by contrast, the vane angles reduce the cross-sectional area. The key is a sudden push on the gas pedal: the smaller the cross-sectional area, the faster the air flow, which means that the charger goes into operation considerably more quickly. Since variable turbine geometry was introduced, the torque curve for the turbo engine looks like a table mountain, with the peak quickly reached following a steep ascent. 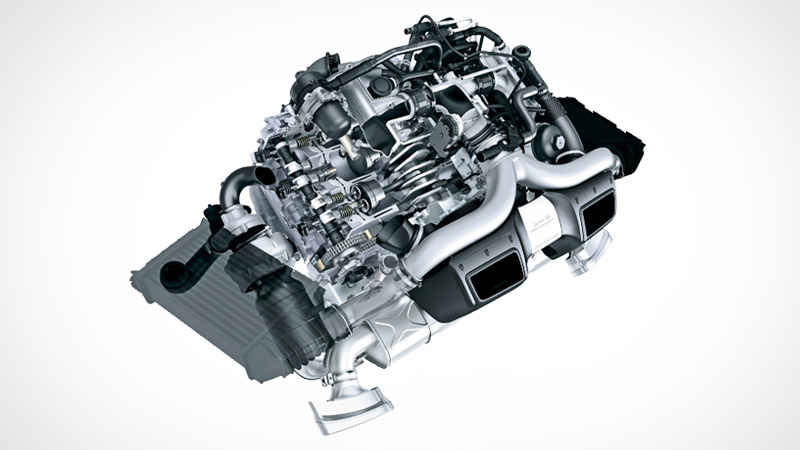 In 2009, introduced direct fuel injection, enabling the 911 to exceed the 368 kW mark (500 hp). Injecting gasoline directly into the cylinder has a positive effect on fuel consumption. In this way the engine power can be controlled essentially without a throttle valve. The directly injected fuel cools the combustion chamber and therefore enables greater compression. The reduction in consumption by more than a liter per 100 kilometers is attributable to the double-clutch transmission.

The aim for the current was to reduce average consumption to less than 10 liters per 100 kilometers while also increasing power and response yet again. The new engine is disconnected and disengaged when coasting, and also when stopped at traffic lights. But you’d be wrong to think that that means you’re riding a gentle, domesticated workhorse. One tap on the gas pedal and 560 steeds are suddenly back in the fray.